The clock began late one night:

As I stepped from the car the night sky reached from horizon to horizon like an upside down bowl filled with inky blackness. There were so many stars that you couldn’t have fit a spoon between them.  Stretch your arms out wide palms up and imagine holding millions and millions of stars.  The stars are so dense that you can’t pick out any familiar star formation, not even the Big Dipper.  This is the night sky at North Shelton State Park, Colorado.  This is the night sky that I remember as a child on trips crossing Nevada.  Nice to know this sky is still there.

The first flock of geese flying low overhead hadn’t even had time for the last goose to slide into his place in the formation when another flock followed.  I made a pot of hot chocolate spiced with chili and unwrapped an L-pod (oatmeal, peanut butter and jelly bar homemade from Colorado Springs) and settled-in to watch the flocks.

For an hour they rose from just over a low hill heading out wave after wave.  Their honking was interspersed with the sound of distant gunshot.  Anyone who missed getting their goose on that morning had to have their eyes closed and their trigger finger frozen.  The temperature hovered at freezing.  For me a good start to an extraordinary day. 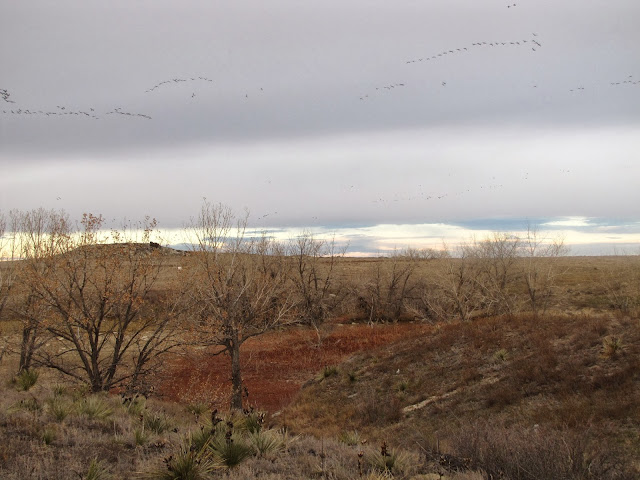 The highlight of the day’s agenda was to be Mt. Rushmore.  I had charted a course along narrow by-roads with time to stop here and there.  I slipped into the Central Time Zone and changed my car clock before realizing I had edged back into Pacific Time.  Hour lost and hour gained.

Glad I had that hour back when I came across a tractor and tractor parts lot. 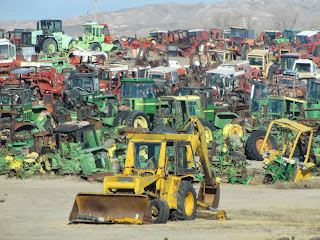 Gary had been a part’s guy.  He loved cars and tractors.  If he spotted an old tractor he would often know its brand and year.  He told with a laugh of having to resist purchasing a tractor at an auction once. 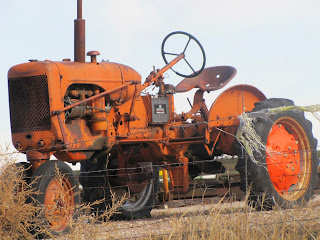 He was a city guy with no place for a tractor like this one. 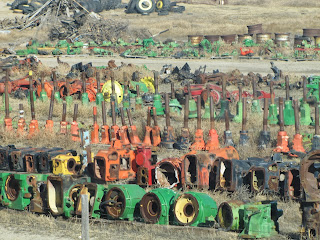 Now if Gary had been with me we would have been here for hours.  He would have appreciated the orderly array, the ease at which one could find a part in its proper row and the pleasing color combinations. 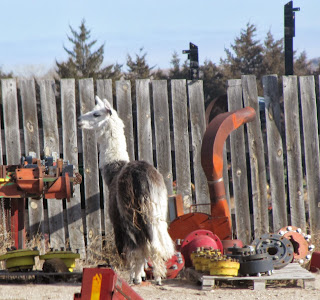 The pack of llama guards would have generated a laugh.  This llama appeared to try to disguise himself as himself as a tractor part.

With good thoughts of Gary swirling around in my head I returned to the highway slipping between a couple of cattle trucks.  I just caught the proprietor’s sign out of the corner of my eye as I increased to  traffic speed.  Really?  Did I see it right? 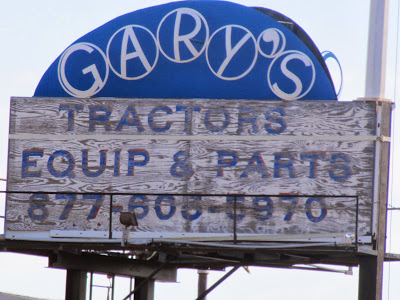 I drove about five miles before deciding to return and get a photo of the sign.  A good sign in more ways than one.

In the small town of Chadron pup and I stopped at Finnegan’s Park to eat a spinach salad with cranberry-jalapeno chutney prepared by my sister.  (That sweet sister in the last post.)  Before cruising from town I spotted a sign directing me to an espresso shop.  Charmed by the original metal ceiling, intricate tile floors and warm feeling I vowed to return the next day to write on the blog.  I did and stayed a few hours.

As I approached Hot Springs, South Dakota, I decided to detour slightly to find the Evans Hot Springs where I hoped to end the day.  The posted hours gave me until 8 o’clock.  With these hours I had time to take the back roads to Mt. Rushmore.  Lucky I did.  Coming around a corner here was a small herd of buffalo on the road.  I don’t know what they were licking from the road, but they were intent. 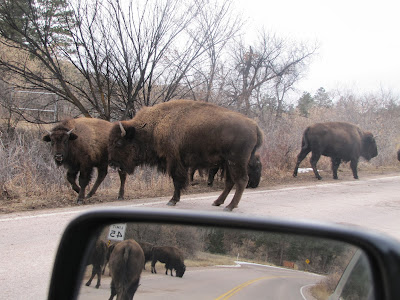 And after passing The Crazy Horse mountain sculpture one comes up the backside of Mt. Rushmore. 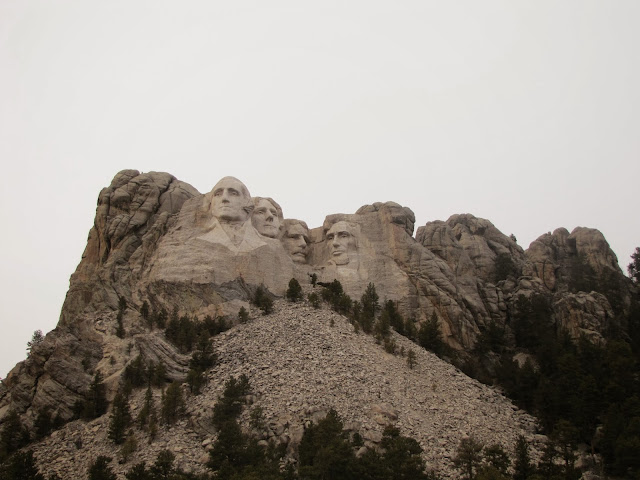 This view doesn’t come into sight until you pull into the parking lot in line to pay the $11 for the private lot.  The fee helps pay for the six-level parking garage.  Only a handful of vehicles graced the lot at 4 o’clock on the first day of December.  I arrived in time to get the last light of the day. 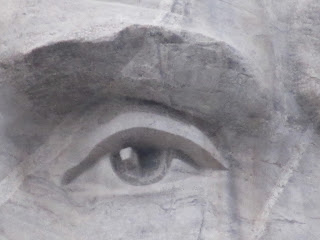 How did the sculptor capture the glint in the eye?  Can you guess who it is?

I had time to see a movie, tour the museum and have dinner at Mt. Rushmore.  Traveling this time of year is wonderful.  At first I was the only customer in the café.  The manager asked where I was from and called to the chef to come visit.  The chef was from Tri-Cities, Washington, which is a mere sixty miles from my hometown!  I stood at the serving counter eating a hot dog and bowl of vegetables as we chatted.  The young chef came for the summer for fun and decided to stay for the winter.  As I finished my hotdog, the next customer arrived and the gregarious manager again asked where she was from.  Walla Walla!  Now really, three Washingtonians below the stony glare of George himself!  What odds? 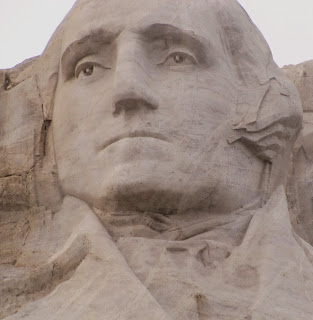 The day wasn’t over.  Ms. Congenial GPS directed me through an unmarked shortcut back towards Hot Springs.  I stopped at the KOA campground close to Hot Springs.  This was my intended stop for the night.  I just wanted to look around before heading in to the soaking pools.  The campground was open just like the one the night before.  However, I think that campgrounds that are open in the winter need to clarify OPEN.  Maybe they should just say in their website they are “O”.  As in “Oh, there is no electricity."  "Oh, no showers."  "Oh, no restrooms unlocked."  "Oh, no lights.”  I filled out the pay form and decided to carry it with me just incase I saw something better.  (Actually, it was so dark here I couldn’t see anything but the pay box under the only light.)

The Evan’s Hot Springs has been sold to the city.  It is a city treasure.  The pool’s floor is covered with smooth river rocks.  Rings hang from the ceiling for swinging out into the pool and there is a huge slide.  Two Jacuzzi soaking tubs, a sauna and a stream room are tucked into a corner.  I asked if there was a senior rate and instead got the day’s special of half price!  A half hour of lap swimming and a few soaks erased the bone weary aches.  Falling into conversation with a local family completed the experience.  We all left at closing.  As I took pup for a little stroll under the lights before heading to the blacken campground, my new friends Monika, her dad and baby Mika began to drive off, stopped, reversed slowly, rolled down the window and asked if I wouldn’t like to stay with them for the night.  Pup at the dad’s and me at Monika’s.  “It would be warmer and more comfortable.” Monica said encouragingly.  So ended my twenty-four hour day.

(Post script).  I had a good evening talking with Monika and her dad gave pup the royal treatment and gave me directions to a few highlights of the area.  Thank you both.  I slept well on that comfortable couch.  The next morning I took a detour to see the local lakes and drove around this charming little town.  I’ll be back for sure.  Twenty-four hours wasn’t enough hours.

Posted by boxoftales at 8:56 PM