Ending the Year with Music and Art

Traveling brings such unexpected blessings.  The last few days have brought a few.  My hostess at my Airbnb home has friend who is a DJ.  She is charming and funny.  Rebecca, the DJ, interviews Canadian musicians throughout the year.  Her last show on CJLO 1600 for 2013 was comprised of her favorite top twenty five songs from the Commonwealth.  Rebecca invited us to come to the studio and listen (being ever so quiet).  So here is a shot of the studio on the air. 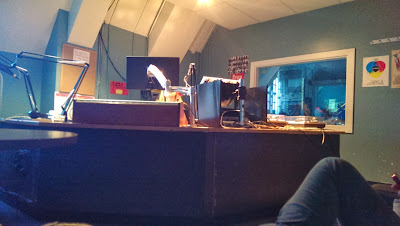 The number one song that she choose was "Heart of Gold" by Groenland, a band from Montreal.  Here is a link to that song:  http://groenland.bandcamp.com/track/our-hearts-like-gold  If you don't do anything else before closing this blog, do listen to that song!

Our household is celebrating New Year's Eve a little early, so tonight there was a gathering with friends.  Counted among us were three from the United States, a charming couple from Columbia and a Scotsman.  Two of us from the States were the only ones not living in Montreal.  After a dinner of sushi and salmon pie, Findley MacDonald slipped out his guitar and played  and sang to us a round Irish-Scottish songs.  I'm amazed to come to a mostly French speaking city and be entertained by a Scotsman! 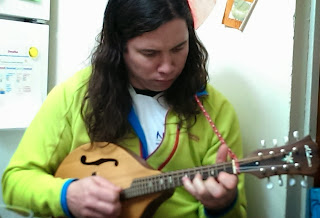 Findley had also brought a mandolin and played more songs for us.

Earlier in the day I hadn't meant to go to an art exhibit; I was on my way to the library.  However this not an ordinary library.  The name is the Library of the National Archives of Quebec.  This is a photo from the foyer.  The library is quite new and built above the major Metro station of Montreal. 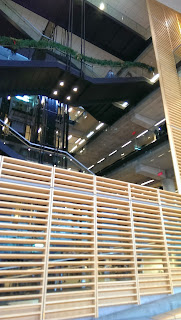 Just to the right of this photo is a hallway that leads to a quiet little coffee shop or down to a large art gallery.  Later I noticed an auditorium and another exhibit area inside the library.  I had come to do some genealogy research  at the library both on Gary's family and also for a friend.  However walking down the hall, I noticed an exhibit.  The art exhibit introduced me to an artist that I should have heard about before. 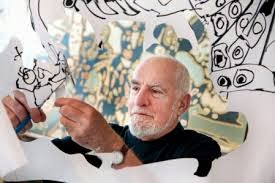 Rene Derouin left Canada for Mexico when he was 19.  His father and his brother had both drowned in the St. Laurence River.  All around him he saw French Canadians looking for inspiration in France.  He wanted to go somewhere else to gain a new perspective.  For fifty years he spent time in Mexico and in Canada.  While in Mexico City he experienced a near death episode in a massive earthquake.  Out of the experience he began making small sculptures of figures, as though they had just stepped from the mud evolving into humans.  He made 20,000 of these, no two alike!

When all were done, exhibited, filmed, reviewed, and then stored, Rene could not forget them.  One day he decided to return them to the mud and water.  With his wife and a friend they loaded a huge box containing the 20,000 sculptures onto a boat and carried them to the center of the St. Laurence River.  From earth and water we arise and we return to mud and water.  As Rene threw all of the sculptures into the river, he said he felt liberated.  Liberated from the tragedy of his father and brother and a literal liberation from the weight of the 20,000 sculptures.

Montreal spends 60 million dollars on snow removal per year!  A student at McGill University made a tall tale of this story.  A link to this creative endeavor is to be found here:  http://www.mcgill.ca/files/architecture-theory/Evans.pdf   Take a moment, if you are curious, and look up Montreal snow removal on You Tube to see how snow is removed.

Posted by boxoftales at 9:08 PM