I have to admit to a failing.  I thought that Nebraska and much of the plains area was the place where people were from, not a place that people stayed.  I erroneously inferred that Nebraska would not be a place preferred really by anyone who could be somewhere else.  I’ve caught myself smiling the last few days as I talked to farmers, shopkeepers, museum volunteers and just folks.   Smiling because I’ve been laughing at my ignorance and smiling because I kept finding people IN LOVE with Nebraska.  Smiling because I kept seeing beautiful places and signs of prosperity. 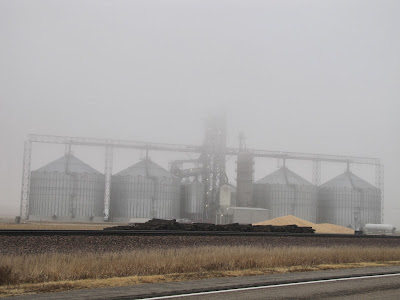 I crossed most of the state on Highway 2.  The morning was foggy.  Pick-up trucks followed me or passed me.  Farmers hung around service stations exchanging a few words, joking.  Everywhere I saw evidence of work being completed before the incoming storm and frigid weather.  I had purchased a book about early Nebraska Hamilton County pioneers.  The blizzards figured prominently in many of the accounts.  Farmers would need to be a little cautious and keep an eye on the weather. They would need to have good tires, good transportation, and good snowplows.  Good humor.

As farm businesses appeared along the highway they would announce the coming of a town.

Little towns had already begun putting up their holiday lights and barns displayed stars and wreaths.  Posters announcing Christmas events were plastered on store windows. Casual conversations would be interrupted to make plans for school concerts or parties.  I overheard talk of fundraisers to benefit the needy in their towns.  Plans and worthwhile events were afoot.  I felt comfortable in these little towns.  Impressed with the pride with which they maintained buildings and relationships.
The radio station played country and western songs, interspersed with the current prices of beef, hogs, wheat and corn (some up cents and some down dollars).  Worrisome news for some, I suppose.  One station announced that news was next and than played an advertisement for nursing homes.  That was the news!  I couldn’t seem to catch world news on any channel.

Distant relatives of mine, settled in Aurora, Nebraska.  While at the local museum, I bought a book with accounts of early settlers.  Some of the names I know.  Some of these people were in the photos that I donated to the Aurora Museum a few years ago.  I talked with a local eighty-year-old third-generation farmer.  The farmer reminisced about having to go off to war years ago.  When he came back to Aurora, one man gave him a cow, a widowed woman gave him another and a third neighbor gave him a pregnant sow.  He earned half of the sow's litter by raising it.  He was able to get on his feet and work his own farm all of his life.  He said people helped people back then. It was possible then to become a farmer or a rancher with just a little help.  He seemed to miss that kind of connection.


Being a houser (see earlier post on housing and housers) I find that it is worthwhile to connect people to the historical record of their home.  One of the reasons that I stopped in Aurora was to try and make the information on the house photos (that I donated a few years ago) more accurate.  The extraordinary barns and simple white clapboard houses in the photos had no addresses.  With the help of the third generation farmer and museum curator we were able to put an address on a couple of the photos and determine if the buildings still existed or not.  One of the photos was of a group posing in front of a house. 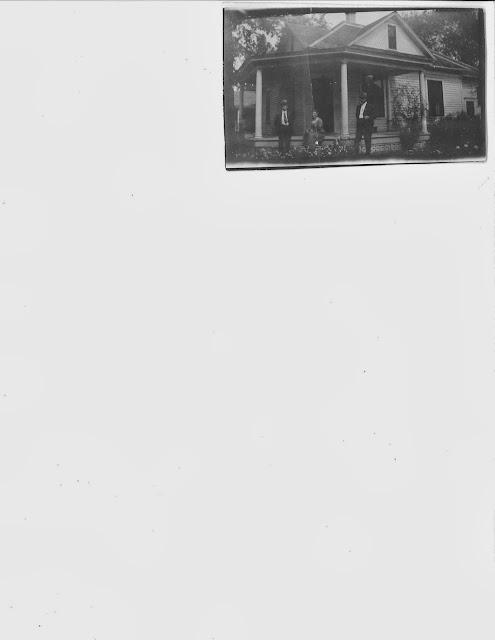 I had assumed that the house was on a corner.  The house was the town house of the farmer, John Read.  After juggling a number of plat books, phone books and ancestry data, we located the house.  I later drove by it and this is what it looks like now. 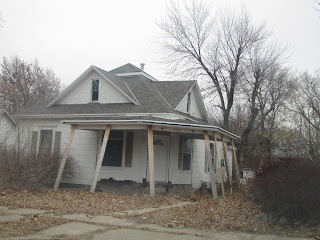 Still standing, much smaller than I thought, not on a corner and in the middle of a porch renovation.  I already knew from real estate records that the original graceful columns were gone and had been replaced with strange lattice-like columns, but I didn’t expect to see the whole porch gone!  Houses do change.  I wonder what they will do now.  The photo with the original porch is being passed to the current owners.  Maybe they will redo the porch in the original style.  Maybe.

John Paul Jones, another relative, originally lived in a sod house.  He was a civil war veteran homesteading under the deal made by President Lincoln for Union soldiers.  A soldier could “prove up” a plot by building a structure on it.  He could own the land within five-years or even less with credit for the years that he had fought in the war. We have stories of that sod house.

Eventually John Paul could afford to have a clapboard house built on the farm.  He hired Arthur Hickman and his dad to build the house.  Arthur and John Paul's son, Walter, both must have both had an eye on Arvilla Read, daughter of the John Read mentioned above.   Walter and Arvilla eventually married and moved to Grand Junction, Colorado.  Walter became a grocer and then a postmaster.  When he died in his fifties,  Arvilla ran a boarding house for teachers.  Somehow that Nebraska builder, Arthur Hickman, now a widower heard about her, wooed her and asked her to marry him.  By this time he was a wealthy man.   Here is his former house in Lincoln, Nebraska.  I took this photo just to compare with the one I have at home. 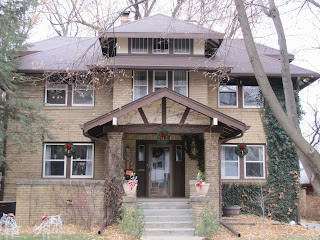 Arvilla and Arthur moved away from Lincoln to Pasadena, California.  We have a narrative of the two of them flying to Hawaii on one of the first commercial  Pan-Am flights with a group of expats called the “Nebraska Club”.  The flight was twelve hours long with "a pilot that looked like Lindy".

I tell you these details to help you understand why I thought everyone was trying to get out of Nebraska and they never went back.

The Nebraska State Capitol makes it clear that Nebraska expects to have people around for at least 500 years.  The architect was told to use materials that make the building last that long!  Those columns are marble from Italy and all of the floors are stone.

I toured the capitol building of Nebraska.  Wow!  Talk about state pride.  The building is stunning.  Gloria gave me a tour.  I talked both with her and one of the maintenance men, who took our picture.  Both were natives, long time employees of the state and proud of their home state.

In Nebraska City I stopped for coffee and a cruise through town.  When I entered the coffee shop there was a large table of ladies all talking back and forth like they did this every day or every week.  They were the only customers at the moment.  The shop owner asked where I was from.  I guess it was rather obvious that I was new in town or I would have been sitting at that table with the local women already.  After small talk, she just gifted me the Nov./Dec. issue of the Nebraska Magazine (value $5.95).   I liked Nebraska.  I liked the small town hospitality.  I hope that I get back some day.