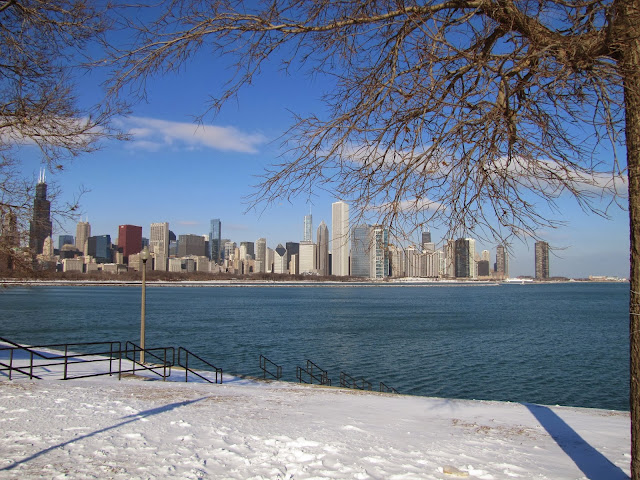 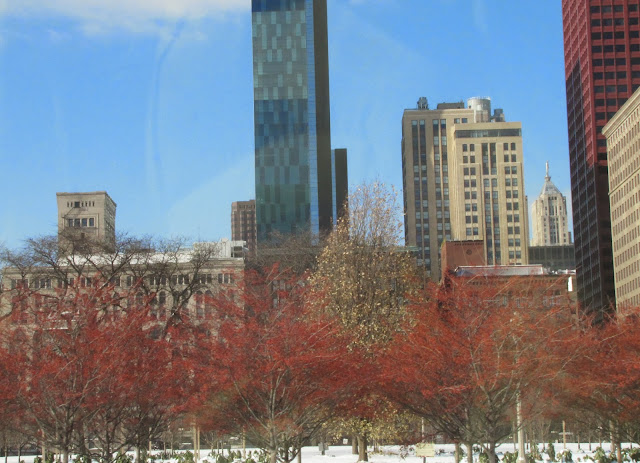 From her toe pointed at Gary, Indiana, the Chicago Shoreline Highway draws one up towards an enticing view of high-rise elegant old apartments (think doormen) and brash gleaming skyscrapers. 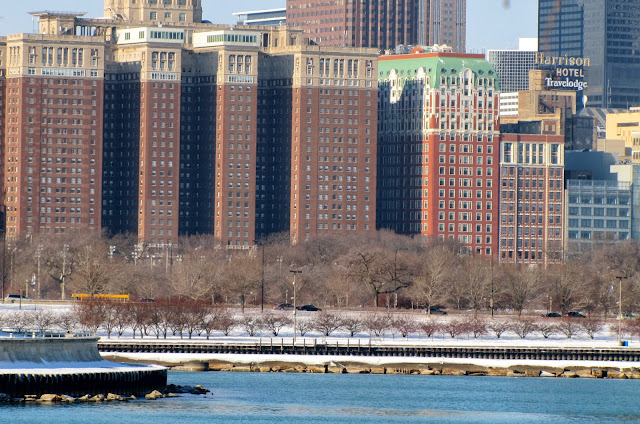 On your right side the Shoreline Highway the winter tree branches hold-up the sky reflected in the turquoise water.  Look, look at this lake.  Your head swivels.  And swivels again.  Beautiful.  You begin feeling like an owl. 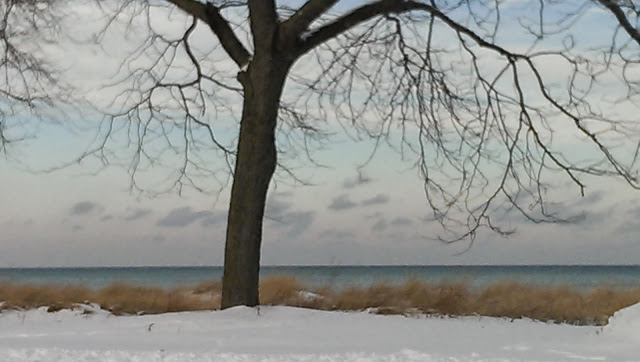 As the scenic roadway curves off into the little neighborhoods to the north, wrinkles in her sleeves and her shoulders appear.  Follow any street and patterns repeat themselves… walkups, gracious old homes, apartment houses, brick shops, and schools.  One sees an old place, new sign, old school, new business, old brick, and new facade.  The fabric of this city is pleasing.  Rich. Touching. 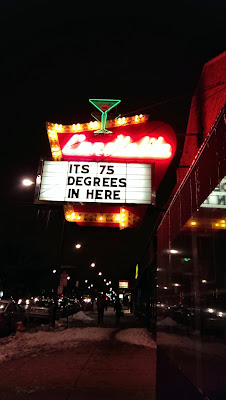 Over the last many weeks I’ve passed through a few cities and fair-sized towns.  None have the satisfying feel like old Chicago.  Back in Champaign, Illinois, I pulled off the highway to see the town.  Unfortunately I took the second business exit instead of the first.  The road routed me past strip malls for a half-an-hour, as indistinct as if I were on any strip-minded road in any city.  I grappled with trying to find something of interest without luck.  I kept thinking of the children whose parents would traverse this wasted roadway year-after-year.  Might as well turn on the car video screen.  Old Chicago had a very different feeling.

We went to dinner at the neighborhood diner club in this photo.  The building didn't get torn down when the original Candlelite was done thriving.  Now it is a local sport's bar serving the best grilled burgers.  Best that I have ever had.  Crowded and warm.  The temperature outside was in the single digits.  Appreciated the sign's humor and the welcome my friends received as regulars.

I stayed with some friends, whom I had gotten to know them the summer before at Glacier Park.  They and their sweet dog welcomed pup and I.  As I would slip out of their gate to take pup for her constitutional, parents walking their children to school called out greetings.  One dad with his face muffled to his cheekbones commented on the cold, his eyes twinkling above his scarf.  He knew that he was making a sacrifice to walk his child to school and proud of it.  I was only a visitor, but didn’t feel like one.  Few people speak to you in strip malls.  You’re invisible.  I like this city feeling.

I felt bedazzled really.  Charles took out his thirty-foot ladder to maintain a tradition. He said that even in the summer folks walking by would inquire as to whether he was going to decorate his tree or not come Christmas.  As it gets harder to heft that ladder, he is reluctant to disappoint neighbors.  How sweet to know that your endeavors are noticed.  That you contribute to the richness of the fabric of your neighborhood.

As I left Chicago, sweeping north through her head I entered the neighborhoods of elegant old homes.  Like a fancy, feathered hat, the gracious homes vied for attention.  Still dressed in fetching white, the city felt perfectly dressed from toe to head.