Muddy Puddles and Other Views 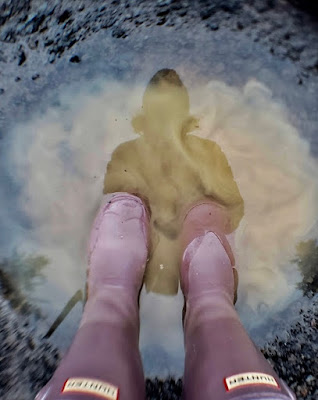 I am standing in the middle of a rather muddy puddle, astonished that no one is scolding me for my foolishness.  There is no official age limit to prohibit me from playing in puddles, but children are granted a certain priority to be the primary competitors in this sporting event.

As a former teacher, I always kept an eye out for the best puddles.  They seemed to attract any child wearing thin tennis shoes and soon to be sodden socks or the exuberant child, who being outfitted with the appropriate rainboots, entered all puddles and promptly stomped dirty water on anyone within range.  Knowing the siren call of puddles, I bought the school lots of pairs of spare rainboots. (Children usually had more spare clothes to change into than shoes.)

I am sitting
In the middle
Of a rather muddy
Puddle,
With my bottom
Full of bubbles
And my rubbers
Full of mud.
…

Who could ever forget the beginning of the poem “Muddy Puddles” by the Canadian award-winning poet Dennis Lee.  I haven’t yet gone to the lengths of his character, but out on my wet day dog walks, I purposely wear my purple boots.  I am on the Board of my community.  I could say that while standing in a puddle I was just checking the road condition.  A Board responsibility.  Would anyone believe me?

The daily walks with my slower and older dog are casual stop-and-go affairs.  Hoping to up our game, I requested booties for the her for Christmas, since Lizzie does not like snow or ice between her toes.  But those little purple booties were not appreciated.  To her they were more like new chew toys.  Therefore, I must still carry Lizzie across the icy streams and make the walks in snow or ice short ones.  Or even leave her at home for the longer treks.  Here is a view on a Christmas Day of a walk out the cabin and up the hill, sans dog.

Ordinarily the pace of Lizzie allows me to see my neighborhood in all of its micro facets.

The toes of ice formations hanging above the stream. 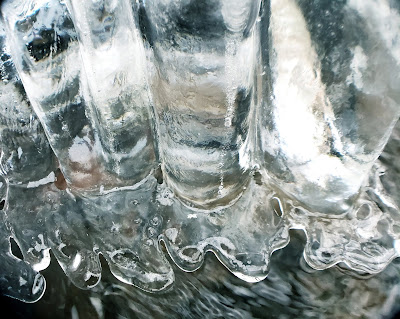 The bolt holding the bridge railing down in the sun after a rain. 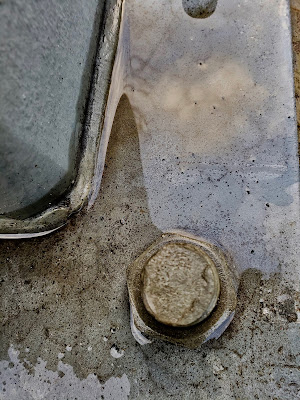 The interesting structures made of ice on a frozen patch.

And, again a puddle.  This one without me but holding the sunset.  I live in a lovely place… fortunate to have muddy puddles and occasional ice.

How Heavy is a Half-hearted Endeavor? 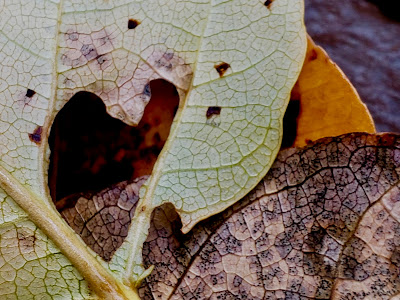 Recently I tried to garner enthusiasm for what might become a significant task.  I could feel a drag each time I considered it.  Having a scale might have helped – like one of those in-body test machines that parses out how much of a body's frame is muscle, bone, or water.  If I could calculate my half-hearted feelings by measuring the gristle of arguments, the ounces of regret, and the bones worth picking, maybe I could clarify if I should proceed or not.

The difficulty is that I haven’t felt inclined to even begin the assessment.  No heart to figure out an answer.

Much like how the in-body test can suggest how much fat one ought to lose and how much muscle one should gain, part of my indecision rests on the dilemma that I will need to eliminate something before taking on a new responsibility.  This is a point of drag.

When I retired, I feared I might have too much time.  Right now, it feels balanced.  Sufficient time to write, assist friends, and take photos.  Do exercise, practice my faith, and keep in touch with family.  And once and awhile do something unexpected.

Like finding frozen fog at Pioneer Park and stopping to take photos. 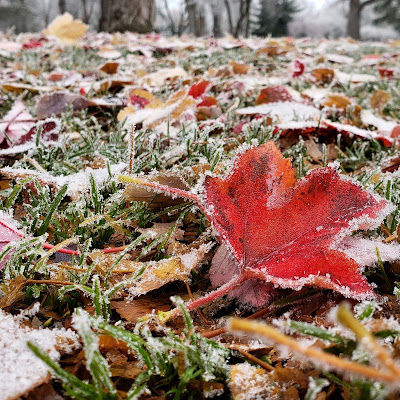 Or combining a small shopping chore with seeing the boat parade in Richland. And catching a few particularly interesting images. 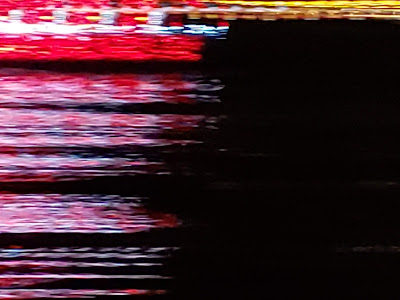 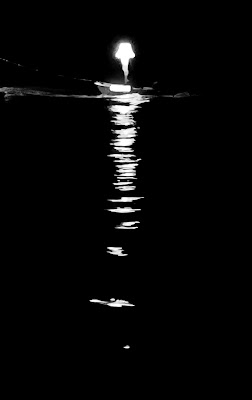 The current decision has a couple of pounds of certainty that something about the proposed new task is not a good fit for my skills.  Could I do the work?  Probably. With enthusiasm and enough competence to suit me?  Not so much.

Writing is a good way to get me to come to a conclusion.  Consultation also.  This blog post seems to have helped me make a calculated estimate of why I felt half-hearted and how to proceed.

Posted by boxoftales at 9:43 AM No comments: 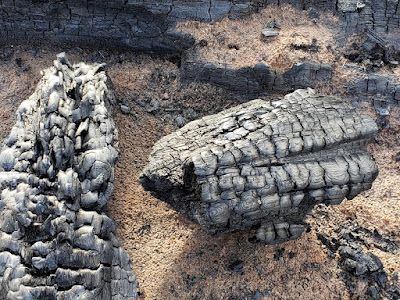 Had I lived thirty thousand years ago, my palette for an artistic endeavor might have included a red, an ochre, and a common charcoal black.  Start a fire.  Have black.  Draw.

When I came across a large pile of burned wood in the Blue Mountains in Oregon at the end of October, you would have thought I might have grabbed a few chunks of the gleaming charcoal; instead I grabbed the photo above – delighted with the optics of the furrowed black surfaces.

Back home, with charcoal on my mind, I noticed the wall of a neighbor's outside fireplace with its dark, charred surface acting as the backdrop for fall leaves. 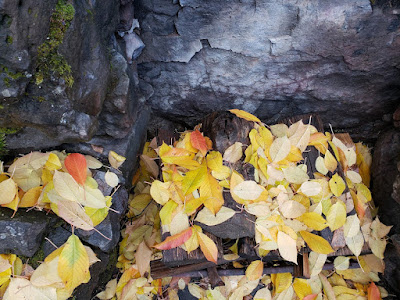 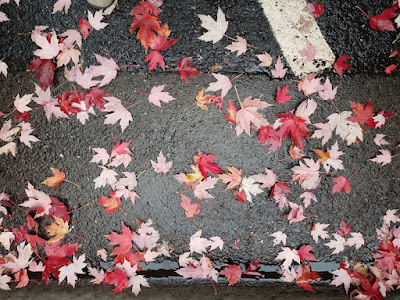 When I look back through my photos, I am surprised how often black has some bit part to play in the overall images.
Black has always been a favorite color of mine.  I own four long-sleeve black shirts and three shortsleeved ones for summer.  Maybe that is why an antique, black refrigerator and the black-striped asbestos siding in the photo below attracted my attention. 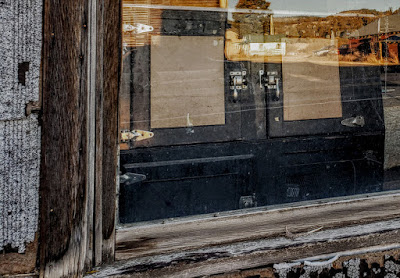 Even my car is black.  Henry Ford, a pious Protestant, insisted that his early cars be offered only in black – a properly severe and humble color.  I don't think of my black Subaru as being particularly inspired by my religious practice, but it does cheer my soul.

On the road, I recently noticed a long line of train cars - some of them black - and couldn't resist taking a photo.  What pleased me was being able to see the same train from two perspectives at once.  I was riding in a friend's car, which was a bright dark blue, so to emphasize the contrasts in the photo, I turned the image into black and white. 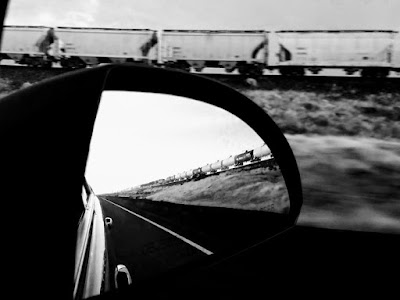 Dogs see in black and white and shades of gray.  I envy them a tiny bit.  What if we could see like a dog in black-and-white and then, at will, see color again.  We could call it "seeing black".  Better really than "seeing red".  Right?


Posted by boxoftales at 8:31 PM No comments: