Mudlark /'mAdla;k / n. & V. L18. [F. MUD n.1 + LARK n.1] A person who scavenges for usable debris in the mud of a river or harbor.  (Definition from Mudlarking on the River Thames by Lara Maikem, a marvelous read)

Initially I was invited to mudlark for a full-sized red pickup truck. Or, with some luck, a men’s size-large, black wetsuit. I found a cow bone and a chair arm. Their resemblance disconcertingly similar.
If I had been scavenging along the Thames River in London, I might have found clay pipes, Roman coins, or Victorian medicine bottles, but mudlarking along Mill Creek River in the southeast corner of Washington State was a different game. I hoped to find an arrowhead from a few centuries back, but everything else was likely to be remnants of the cabin that floated downstream or bits and pieces of stuff washed from structures in the historic flood of this month.
My group of five mudlarkers with the owner's permission crossed a field and approached the river.  Looking just to our left, this is what we saw.  And to the right, way down there upstream, black wheels atop the red pickup, belly-up just as reported. 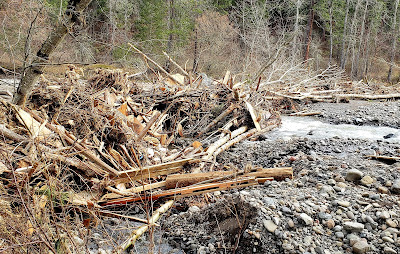 Two of our crew, Dave and Gary, began the journey across the above bridge of natural and unnatural materials. Leary of the crossing, my mudlarking partner, Gloria, and I kept to the riverbank and nearby islands of rocky rubble and soft mud. Black plastic bags fooled us into thinking we might have spotted the wet suit. Two cabinet doors with old knobs were the only thing seemingly of interest mixed in with quantities of splintered plywood and old beams. Brown was the predominate color.
I kept noticing the occasional iron-red volcanic rocks probably washed down from Tiger Canyon. The careful examination of rocks rewarded me with views of natural phenomena that I might otherwise have missed.

The pattern made by waterdrops falling off a log into the mud. 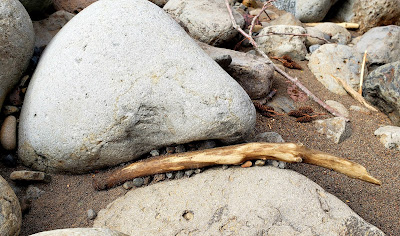 And pebbles neatly wedged along a stick, as if the river current had slowed and taken extra care in their placement.

Last week, I had spotted evidence of other mudlarkers in the area. I wish that I had seen the heron or the cat.

Last night as I glanced through my photos, I came across another mudlarking find from earlier this week. I had gone up the canyon to Oregon to help a family muck out their little cabin. The find appeared to be a cane until I got close and realized that it was an old iron pipe. Mud filled, heavy, and leaded.
So much stuff. And none of it worth much anymore. Even the red pickup.

Posted by boxoftales at 9:52 AM No comments: