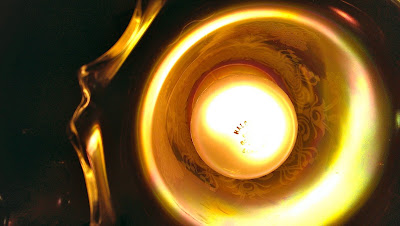 As the evening darkness has begun to recede and I won’t be needing artificial light quite so early, it has occurred to me that I shall miss the beauty of entering a darkened room and turning on a light with a beautiful shade. 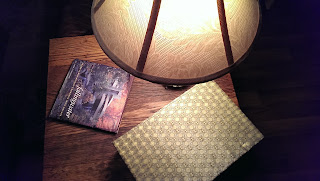 I have taken a few of my favorite lamps up to the cabin.  Without ambient city light or the long summer sun, the cabin sits in deep black of winter nights.  On a moonless night at the cabin, I turned out every light before leaving.  Upon stepping onto the porch and locking the door behind me, I realized that I could not see the first of seven steps or even my car twenty feet away.  After that, I left a small porch light burning.  Arriving in the dark, the singular light welcomed me back.  I’m beginning to contemplate my alternatives for inexpensive lighting including long burning candles and LED bulbs. 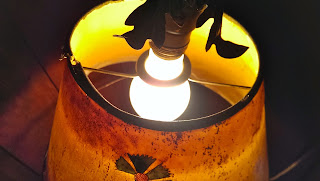 One of my oldest shades, a paper one with hand painted flowers, got a tear last year.  I removed it from the fixture to examine it for repairs and then set it on the floor beside the couch.  I later managed to clumsily step-on it leaving a gaping hole in the backside.  I am using it again at the cabin but have located a replacement shade, minus the flowers.  I’ll have to paint those myself.  I hope they will come out being beautiful. 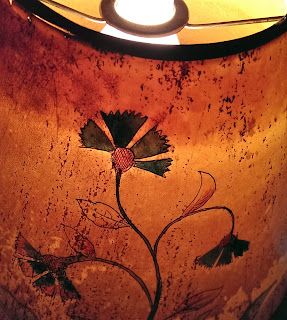 Posted by boxoftales at 7:46 PM No comments: 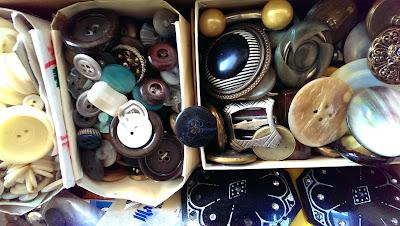 Mrs. Benge and Mrs. Jones were salvagers in that time when women - talking with pins in their mouths - spoke of challenging feats of threading eyes and attaching zipper feet.  (Really, when you think of it, these were tasks worthy of fairy tale stature.)  Their daughters, granddaughters or nieces – almost always the girls - sat at their feet playing while absorbing the lessons of economy. With the wolf at the door, the last dollar spent, women – the ones who collected buttons - could hold the fabric of their family’s dignity together by rummaging through their collections of buttons and transforming old clothes into new.

My Aunt Lucille was such a child.  I know because she was a good seamstress and in my inheritance, she gave me a large collection of buttons.   She told me that they had belonged to her mother, Mrs. Jones, and to her mother’s good friend, Mrs. Benge. 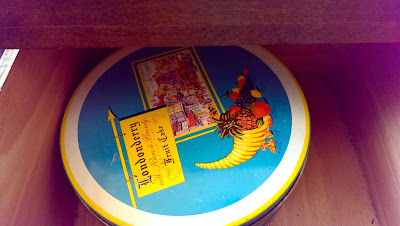 I sew.  Not anything like my fore-bearers could, but I can sew a straight seam, put up a hem or replace lost buttons.  My sewing box was at first just a tin and then after my inheritance arrived, I got an old metal box with handles.  My little tin could fit inside.  Eventually, I replaced that box with a double foldout wooden one that I purchased for two dollars at a Seattle yard sale.  Being bigger, it became a jumble over the years.  I’ve been meaning to straighten it out. 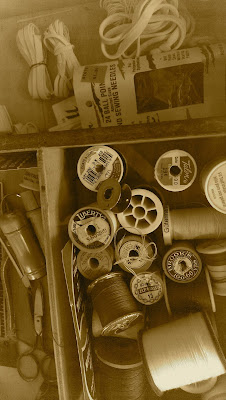 I like being able to find the right color of thread, safety pins (love them) and needles and, of course, just the right button. 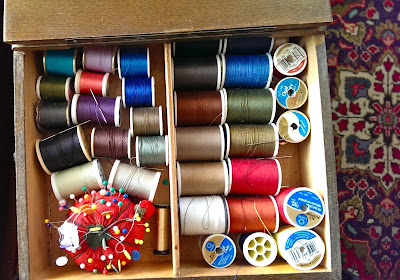 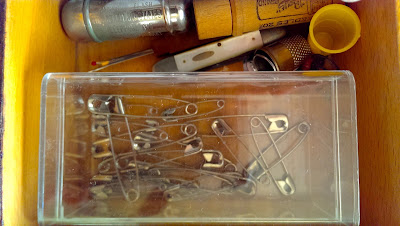 Maybe now I will sew a little row of tiny buttons made of abalone shells on the window curtain (an old twenty-year project) or make a purse with my leather needle and use that huge black and white button to close it.   If, however, I get to neither project, I plan to will the buttons to someone in my family of the next generation.  And maybe they will also get the wooden sewing box with its button-like black knobs.
. 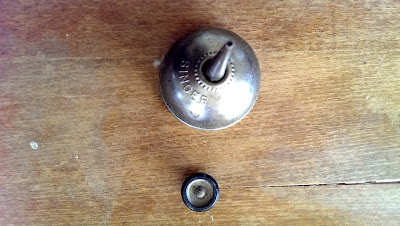 Posted by boxoftales at 9:26 PM No comments: