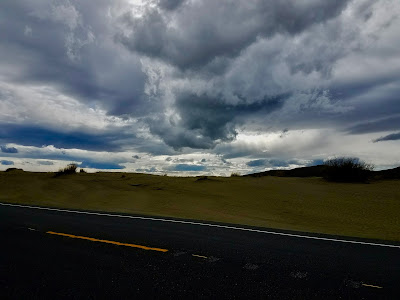 The distraction was the sky – the way its clouds blew into piles and pillars, casting swift silhouettes across the sage-covered land.  The hazard was the temptation to match individual thunder clouds to shadows on the ground or blue holes to patches of skimming sunlit across the sand.  But to do so, meant taking my eyes off the road.  Fortunately, Highway 395 northward across Oregon to Burns has a paucity of traffic.  I travel it every few years and am inevitably drawn to its beauty and to its hazards. 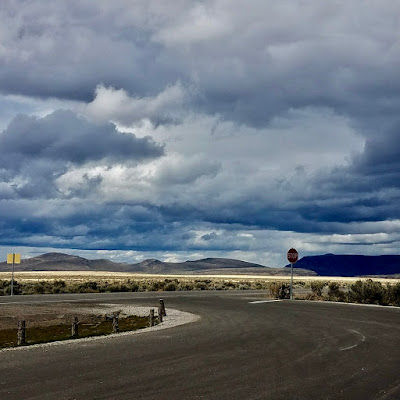 One hazard is the temptation to drive too fast.  The sky is just so big. The horizons are too far off to seemingly arrive anywhere on time.  So, speeding seems sensible.  An incident twenty-some years ago, made me more cautions in this matter.  I was driving fast south on Hwy. 395 and I hit a sage thrasher.  When I hit it, it was just a bump on the windshield.  When I stopped and then returned to find it, it was a gray and still bird.  When I located it on a page in my reference book, it became the sage thrasher.  With it lying dead and warm in the palm of my hand, it felt contradictory to put it in on my life-list of birds. Shortly thereafter, I think, was when I stopped keeping the list and driving so fast.

On my recent trip, I didn’t hit any birds, but I did find a small flock of yellow-headed blackbirds on the fields near Burns.  They were the birds that inspired me to become a birder.  My first sighting of them was in a barnyard off Hwy. 395 back in the 1980's. 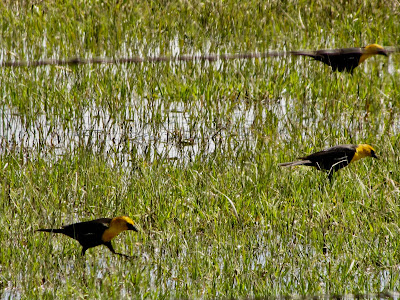 I liked the way the bird's coloring almost matched a near-by ranch truck, which I stopped to photograph. 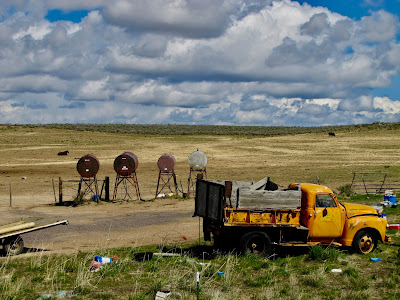 I always wanted to be a rancher.  Maybe it was because my dad read westerns and I grew up when cowboys were heroes on every T.V. channel.  Lake and Harney Counties are ranching country.  I passed cowboys on horses, impressive barns and huge bales of hay. 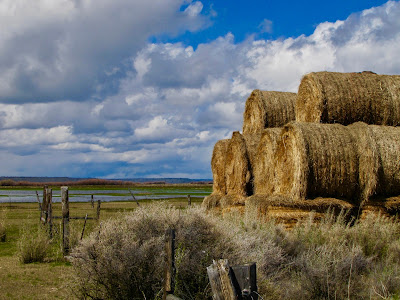 It was my birder's eye that spotted the Canadian goose on the above stack of hay - nesting or resting.  Look again at the photo and you can see the curve of the bird's back.  Burns is on a migration fly-through zone. 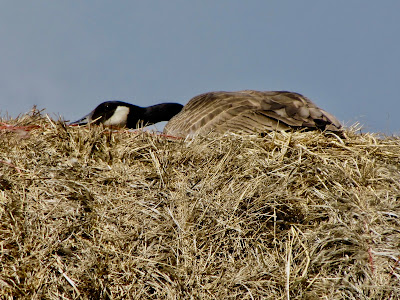 The Malheur National Wildlife Reserve south of Burns was the scene last year of a rancher's protest.  And here I am, wanting to be a rancher.  Obviously, not every rancher has a penchant for taking up arms and stirring up trouble, but I have wondered if the big sky is part of the problem of becoming obsessed with boundaries and fence lines, of what is mine and what is yours.  Of who you are and who I am. 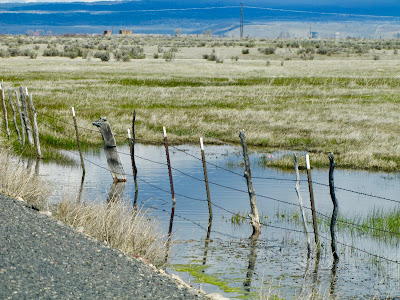 My theory could be faulty, but it is just conjecture.  When I consider living under a wide sky like the one along Highway 395, I wonder if I would acquire a habit of caution, of wariness for what might appear over the distant horizon.  My livestock fences would be to keep my cattle in, but their barbs would keep others out.  A protection and a defense.  I might shift from being open and welcoming to being wary of outsiders and unknowns. I'd watch that open sky and begin worrying about the weather.  I could see it coming from a long way off and begin fussing about its consequences.  Tourists driving too fast, coming up on my tractor moving slowly on the highway would worry me.  I'd begin looking at the drivers as hazards, wary of their opinions and their abilities to harm me.  I'd draw my gates closed and put up warning signs.  The sky, I would say, is the hazard.

Posted by boxoftales at 9:54 PM No comments: