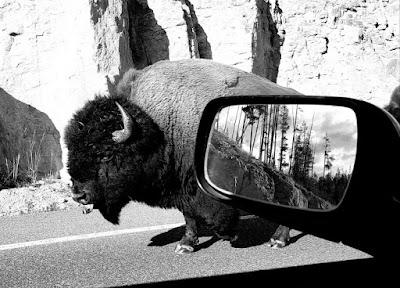 Yellowstone National Park was gorgeous in sharp black and white prints taken back in the 1920s.  My Uncle Ted was on his honeymoon at Old Faithful Inn when he captured the highlights of the park.  Having loved those photos, I was almost surprised to drive into Yellowstone and have it in vivid color.  To ease the transition, I’m presenting my first photos in black and white.

The bison passed us in the on-coming traffic lane a short distance into the park from the northern entrance near Mammoth Lodge.  He gave me the once over as he passed.  Cars normal to him; bison not normal to me.

Yellowstone is home to wolves, foxes, bears, antelope, elk, deer, and bison.  We saw herds of the antelopes in meadows and a gathering of elk on the front lawn of Mammoth Lodge. There is a certain shock and pleasure to see so many large mammals in the wild.  I have already promised myself to return one year in the winter for more likely sightings of wolves and foxes.

For our first stop we circled formations made by the deposits of geysers.

At the foot of one of the humps, the colors were black and white and appropriately, also, a tinge of yellow.  Yellow stone!

The colors of the various hot pools and the stained mud or rock formations depend to some extent on the microbes and bacteria found living in the range of extreme temperatures.  The colors are disconcerting and memorable.  Early photographers could not capture their essence, but I could.

Yellowstone Park encompasses what is described as a cauldron.  Where there were once mountains – long since blown to smithereens in an enormous explosion – there is now a basin simmering with geysers, and hot pools, and waterspouts.  I was surprised to see something every few miles. 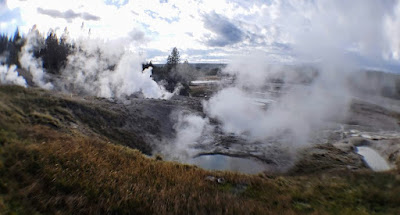 And, of course, we saw Old Faithful.

We arrived just before most of the Park facilities will be closed for the winter.  We saw the last of the buses filled with tourists from Japan, China, and Europe stopping at every major site.  The delight of the guests evident in their joyful chatter.  Many of the shops were empty of summer college staff and were therefore manned by some Chinese on temporary work visas!  They lent a worldly aura to this treasure of a place.

On equal footing with the spectacular natural world was the Park’s literature and signage emphasizing its concern about and their effort to avert the effects of climate change.  An entire page in an introductory booklet described what they have begun seeing as consequences to shifting seasons and temperatures and what they have been able to change in their practices as a result.  I failed to photograph the recycling bins placed everywhere or the requests to alert the maids when they could avoid doing laundry, but each impressed me as much as Old Faithful.

I’ll end this post with a photo of the old cabins at Yellowstone Lake Lodge.  They haven’t been torn down, but they have been updated to be more energy efficient – a worthy step towards the preservation of this wonderous cauldron of surprises.

Posted by boxoftales at 4:41 PM No comments: