A.  A lobster mushroom.  Evidence of a theft?  While hiking on the San Juan Islands last fall, a man stepped out of the woods of a state park and offered my friend and I a lobster mushroom from his large bag.  "Cook it dry and add butter and garlic later."  Was this evidence of a bribe to keep us quiet?  Maybe.  The mushroom was delicious - just as he said.

B.  Bones.  On the side of the path near the mushroom man, there was this pile of neat bones.  Evidence of a predator.  No bears or cougars live on the islands.  Do foxes attack deer?

E.  A wash of turquoise water.  Evidence of a ferry's wake.  Just lovely.

F.  A dog with a Pendleton wool overcoat.  Evidence of a cold winter.  Wore the coat outside so often, it's owner sometimes forgot to take the coat off.

G.  Snow overhanging the eaves.  Evidence of a brief period of warming.

H.  Red ice crampons.  Evidence of a good neighbor.  He leant me his ice crampons after I lost one in a snow drift.

I.  A puddle in the snow.  Evidence my road will soon reappear as a slash of mud.

J.  A storm moving across the fields between Walla Walla and Pendleton.  Evidence that spring is coming.
Posted by boxoftales at 3:05 PM No comments:

This past fall and winter, I have been working on my cabin.  It was built in 1949 and rehabbed in the 1960's.  It needed updating.  The R-5 in the ceiling is now closer to R-30.  The walls are insulated and there are two heating systems – a heat exchanger and a propane fire insert.  The kitchen has a four burner stove for the first time ever!  The bathroom has it's first bathtub and now a washer and dryer in one small unit.  The bright and open inside made the long winter snug and cheerful.


Posted by boxoftales at 3:05 PM No comments: 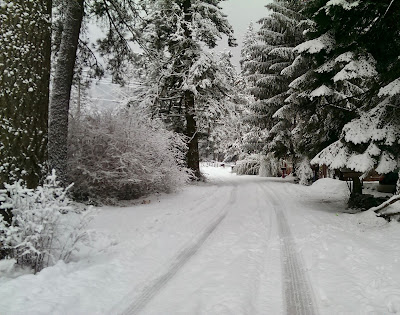 Yesterday, I put on my snowshoes, navigated my cabin stairs and took my dog down my road and up into a canyon.  When I returned, I gathered the snow clinging to my boots and made it into a ball.  As I did so, I thought of this blog.  I have been meaning to write here -about the snow, the cabin, and my work.  Gather ideas into a satisfying hand-full of posts.  It has been almost two seasons since I have posted anything.  A fall on an island and a winter for the record. 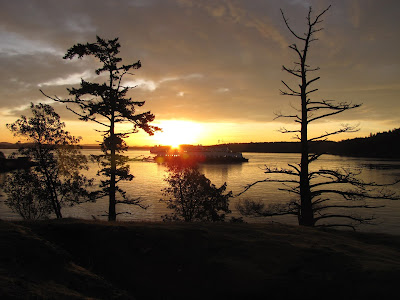 In October, when I was barely settled into my cabin home, I left for a writer's retreat in the San Juan Islands. The Helen R. Whiteley Center with its view of Friday Harbor became the scene for an intense and glorious couple of weeks.  The retreat set a course for me to finish a manuscript with a deadline of December 31st.  Hence my absence from the blog.


An island retreat sounds like a holiday, but the individual cabins and the assigned study room were conducive to long hours of work. The deer were the most common interruptions and I came to calling their sightings deeruptions.

I  hiked most days, some with Catherine Hodges, the writer living in the cabin next to mine.  One day we took the ferry to Orcus Island.

I could live on the islands.  I liked the surprise of seals popping up near me where I sat by the shore or seeing the odd cormorants preening on the docks.  I liked the reddish color of rust and madrone trees.  I liked the weather with its sweep of clouds passing overhead and its occasional morning fog.  I liked the fall on an island.

Eventually, I had to return home.  But, I love my cabin too.  The winter has been a long one with snow on the trees most days.  Picture me here, writing.  Another good season. 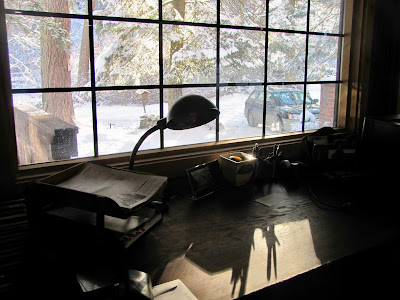 Posted by boxoftales at 2:14 PM No comments: