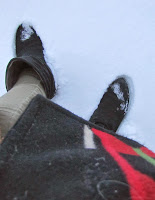 When I was in Walla Walla, I acquired a pedometer thinking that as a preschool teacher I was walking plenty.  I discovered that 10,000 steps is a lot more steps than I thought.

Montreal folks have got to be healthy.  For one thing, walking in the snow uses more muscles than just sauntering along a smooth path.  Yesterday was about a 10,000 step day for me.  I walked to the grocery store and back (1,800 or so steps).  I walked to the Metro stop (900) and then I followed a family, who had recently moved from Panama.  We ended-out walking through deep snow and climbing a low wall (a little extra work).  Next I walked up and down Old Port along St. Paul Street pausing to go through the Centre d'histoire de Montreal Museum (2,200).  Back home from the Metro (900).  Dinner of bread and cheese and then back to the Metro (900).  I was back downtown in the Old Port district again walking to find the pier where there would be a winter firework's display.  There and back (1,900).  Metro to home (900).  Total: 9,500 steps.  If I consider the snow and the two hill climbs... adds up to about 10,000 steps worth.

Today might be a 100 step day!  Staying home due to the ice storm forecasted.   A 100 steps includes up and down the basement steps to do laundry.

I'm not complaining.  The city is so worth walking. 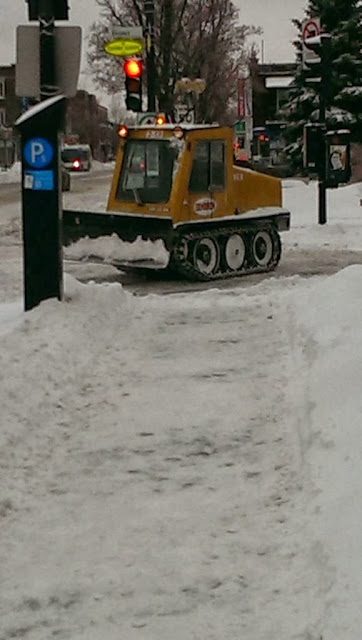 I have mentioned that most of the sidewalks are plowed.  Yesterday I got to see the little plow in our neighborhood roaring along the sidewalk.  This job must be coveted by anyone who has aspirations of being a race car driver.  No one would dare get in your pathway.  I spotted one of the little plows at a corner slowly pushing the end of the block pile aside; otherwise my photo would have just been a yellow and black streak.  (Jack, I see you doing this job with a joyful smile on your face!  It would be a blast!)


I have been thinking about beauty.  I have been posting many photos of  beautiful places or even just beautiful things.  The decision to photograph any particular frame is of course somewhat arbitrary.  Recently I read a book called "Wild Nevada: Testimonies on Behalf of the Desert" by Roberta Moore and Scott Slovic.  In one of the essays an author writes in such a way that one is pulled down from the vastness of the desert to visualize the smallest of insects or plants, sights of beauty on the tiniest scale.  As I travel around through cities or countrysides I wonder often, "Could I live here?  What here feeds my sense of beauty or feeling of visual wealth?"  I try to change the focus of a frame to a smaller focus, if I catch myself thinking, "Not here, please.  Too plain."  Montreal, however, is just pleasing on so many scales. 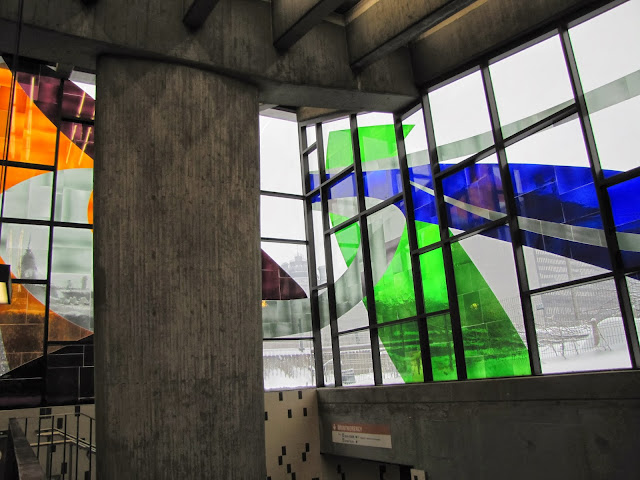 The Old Port area was almost deserted on an early Saturday morning. In the summer, I think that it is likely the street would have been bumper to bumper.  I do so like winter tourist travel. 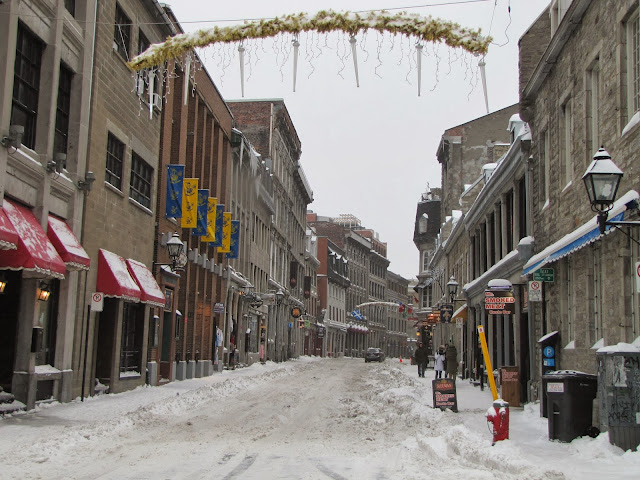 Not all of the sidewalks were well plowed and then I began noticing these signs. 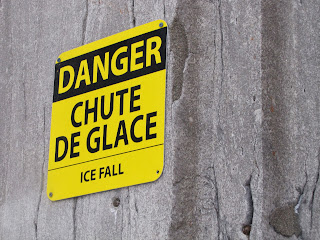 I found it to be tricky looking down so as not to fall and looking up to dodge ice.  Hm, which to do?  Well, just keep taking photos with fingers crossed. 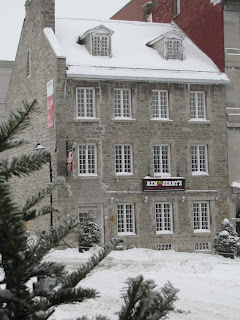 The fire that burned half of the city of Montreal in 1852 blessed the city with a new building code requiring stone walls raised slightly higher than the metal roof lines.  I found it funny to recognize a  Ben and Jerry's ice cream store in a building benefiting from that code.  Surely this is their most beautiful store front. 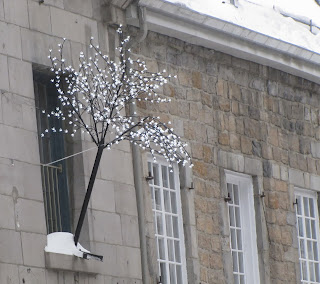 In the name of beauty here is a Herculean task.  Little tree, perfect lights.  Who scaled this wall shouldering a tree to achieve this effect? 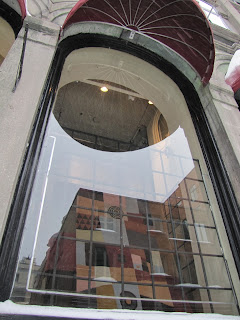 No I didn't.  I didn't lay in the snow to get this photo, but I almost had to.  I wasn't even looking up to watch for some death-dealing cascade of ice when I saw it.

What attracted me was that with a perfect eye someone saw the worth of the curve of the window top, the curves in the maroon awning and then hung a rug with the circles embedded in it reflecting the curves elsewhere.  Did they know that the light would create yet another curve?  When beauty is intentionally designed, one can't help but say "Here.  I could be here." 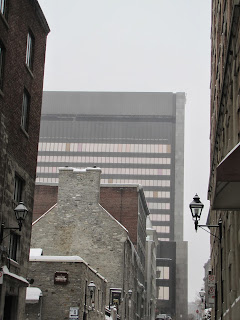 The juxtaposition of building styles and colors is pleasing.  The old making the new ever so more interesting. 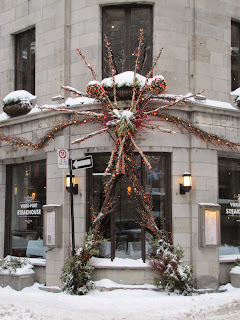 Ha ha, I didn't notice the "legs" until I looked at the photo that I had taken.  Then I saw the eyes.  How much do we miss by scanning too fast? 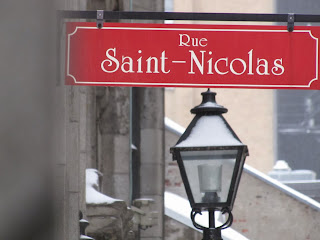 The Montreal History Museum taught me that the street names in this part of town were actually named after council members with "Saint" added for a good measure.  I looked for Saint Nick, never-the-less. 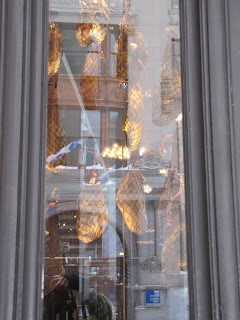 Hams?  The foyer of the this restaurant called "Hambar" has the oddest and most visually pleasing array of hams!  Beauty! 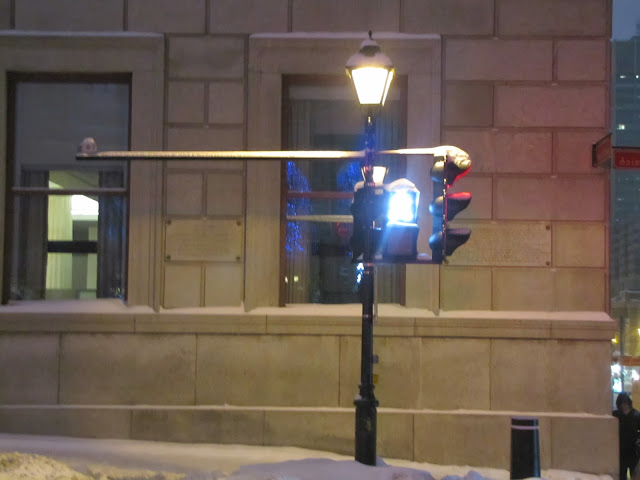 Beauty in the detail.  Anyone else feel like this street light looks like a familiar sculpture?  Is it a mother holding three babies on her hip and reaching for a diaper?  What? 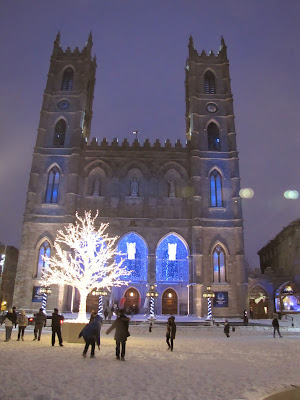 As the night fell, I passed the Notre-Dame Basilica of Montreal.  James O'Donnell was the architect hired from New York in the 1800's. When the building came to completion, he converted to Catholicism.  I find this to be a fitting end to his endeavor. 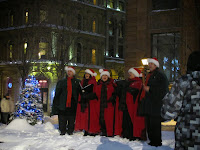 Carolers sang in the square across from the Basilica. 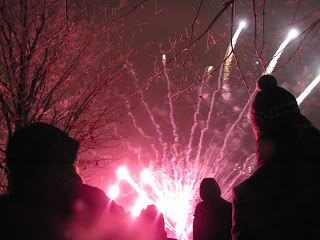 Only.  Only fifteen minutes of fireworks timed to music.  I had a front row "stand", refusing to lay in the snow like some hardy souls in front of me.  The co-ordination of the music and fireworks was fabulous.

I wore one light leather pair under one knit fingerless glove so that I could take photos in the 19 degree weather. (My pockets held the third layer of gloves!)  I would do it again!


The firework guys, their work done, stood along a wall watching the show.  They must have been so proud.  Look closely at their body positions.  One can almost hear them calling out to each other (in French).  The ones with the tiny lights on their foreheads were the ones who gave the last minute orders. 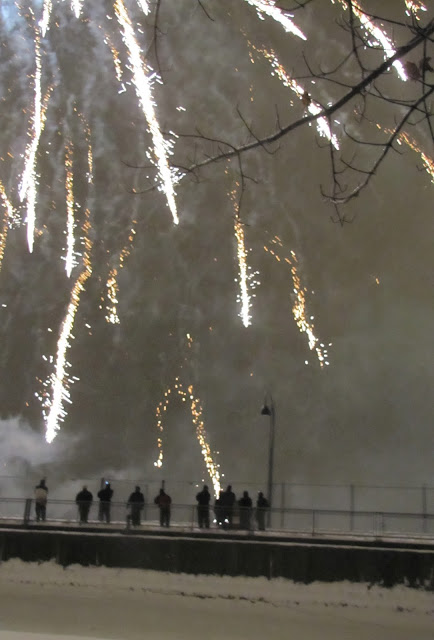 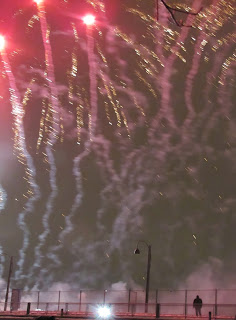 If you go to Montreal in December, plan to be here for a Saturday night.  A gentleman from a small Quebec village said to me that he comes every year to see this firework show.  He said he was at the first one seven years ago and there were only a handful of people.  Now.  Thousands of handfuls.

Before the show, people stood around numerous fire pits, skated, or purchased hot drinks in this park on a pier.  As I joined the streams of people leaving the park across a bridge, I noticed a lady handing-out "gifts" to everyone who passed near her.  I jostled to get in the outside row.  The gift?  A little packet of Kleenex!  I was planning to go myself to buy just such a little packet.  Wish fulfilled.  No one sneered at the "gift".  Montreal, the city of winter noses.

With frames of beauty nestled in my head, I walked towards home.  You may think that I pulled the next photo off of some card site, but I didn't.  Fifty steps more and I was home again. 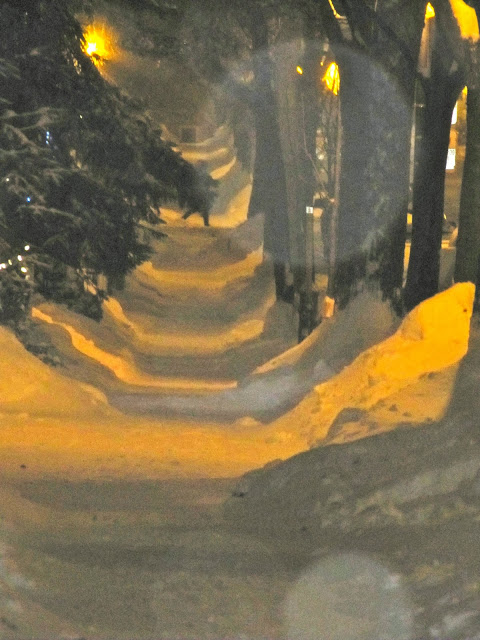 Posted by boxoftales at 1:26 PM