A Turtle Without Borders

Home.
As I turned the corner onto Rue Drolet in the dark carrying eleven pounds of flour, my camera and a bag of books, I softly said to myself, “I’m almost home.”  I had to laugh as I had only been here two days.  I am beginning to feel like a turtle without borders; anywhere I am is where my shelter is.  I like that I can wake and see a new landscape and instantly know that it is my home, no element of strangeness.  That morning I woke to this view. 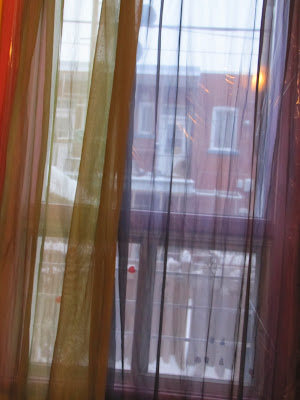 Montreal has street after street with brick walk-up flats.  Street corners are often reserved for little stores.  I can see four large churches by walking a short distance one way or another.  My closest grocery store is of the smallest variety and is very well-stocked.  A café, bakery, brasserie, post office, pharmacy, two sushi restaurants and one French one, a shoe repair shop, laundromat, beauty saloon, bar, metro station, clothing store, shoe store and nursery are just a few of the places within a couple of blocks of me.  This is city planning at it’s best.

Shortly after I turned the corner of Rue Drolet, I put down the flour and the books in the snow and took a moment to photograph this Santa in the window of the only apartment that I pass. 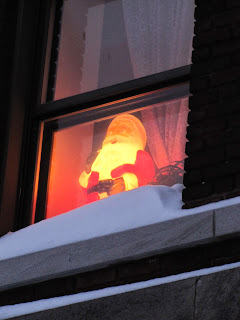 Each evening a few more lights and wreaths appear.  Although I see Christmas being celebrated, the neighborhood is nicely mixed.  There are certainly Muslims.  Yesterday I attended a holiday party and program at an elementary school and rode the metro with another group of school children.  Many races and nationalities were represented.  Almost everyone speaks French and English and some know even another language.

Oddly enough, not knowing French doesn’t make me feel out-of-place.  The sound of it is so beautiful.  I’m finally catching a few words.  One sales lady and I bantered back and forth exchanging words.  I now know how to say, “lavable en machine" for "machine washable".  Who knows when I will need this again?

Certainly the language of a smile is understood everywhere.

Today is Friday.  I have been here three and a half days.  The first day I did not venture very far, but I did begin navigating the metro system.  Large areas of Montreal city proper are connected underground by metro trains and passageways.  There are even large shopping centers underground.  Yesterday as I walked through a long brick tunnel a musician began playing his horn, the sound echoing up the hall in a very melancholy way.  The beauty of it brought me to tears here in the metro. 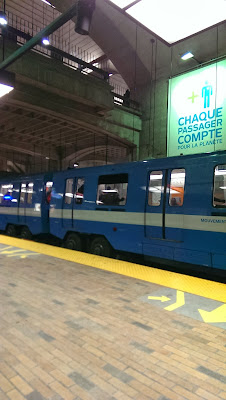 The metro trains themselves arrive amazingly regularly.  One waits only a few minutes and then must board quickly.  No lolly gagging here.  Even with all of the slush tracked in from the streets, the floors were kept fairly clean.  On board people talk, read papers or use their cell phones.  Last year in Washington D.C. it was a very different experience.  Silence often reigned and few passengers made eye-contact on metro rides.

The Canadian Centre for Architecture was one of the first places that I visited.  On the way there I saw this huge truck hauling construction debris trying to navigate a tight corner and then plow through a snow pile.  I have been impressed with the many trucks and construction crews working in difficult weather and confined city spaces.


The peace of the Architectural Centre was so inviting.  The current exhibit documents the planning and building of the post World War II communities of  Chandigarh, Punjab, India and an expansion of Casablanca, Morocco.


Leaving the Centre, I retraced my steps and stopped to take photos in a Cabot park surrounding the Atwater Metro.  Most of the sculptures honored women except the one twenty-five-foot tall sculpture of a man.  (I could not read who he was due to snow, but later found out it was the Italian born English explorer, John Cabot.) 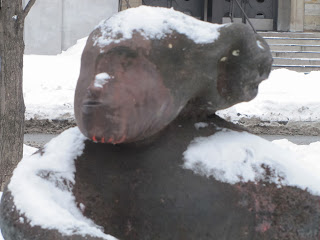 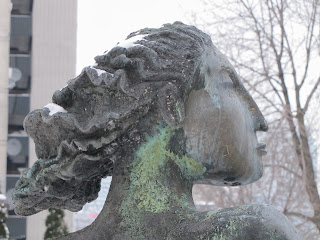 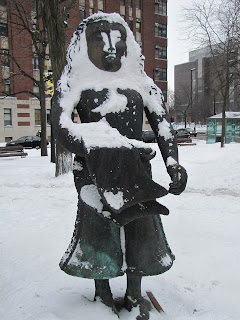 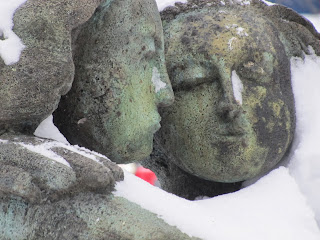 The parks are not the only place one finds sculptures or beauty.  The next photos were taken a few blocks away from my home on St.Denis Street. 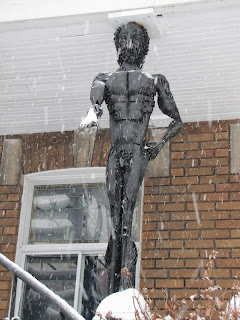 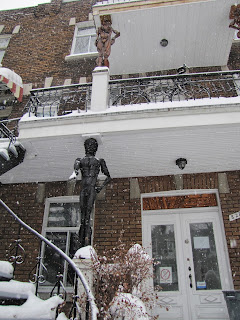 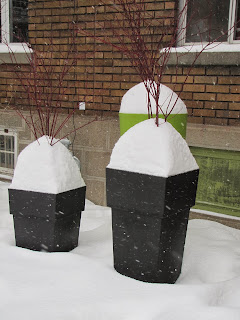 Now my bike friends will appreciate the next photos.  Yesterday Kara pointed out a broad path for bikes that runs all the way to town.  She said that even in the winter one will see bike riders pedaling by in the snow.  The first bike in the photo had been ridden recently evidenced by one day's snow on the seat.  The next bike maybe not so recently ridden.  I did see one bike rider later negotiating the slush through traffic and counted 30 bikes chained to railings and balconies in a one block residential section!  Surely a testament to a bike culture. 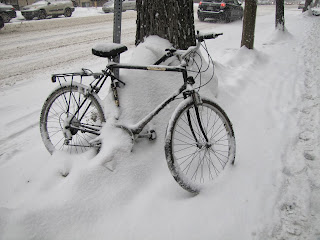 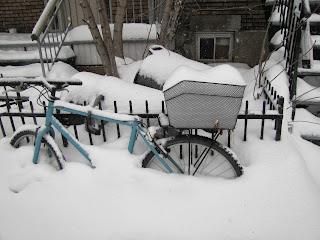 Counting bikes I spotted this red sticker on a bike chained to a fence.  The sticker actually was produced for a few years in Chicago and is no longer available.  However, if you go to this blog site, you will enjoy the blog:  http://1lesscarnews.blogspot.ca/
I was walking to the big fruit and vegetable market, Jean Talon, during the morning snowstorm.   When I arrived I noticed this quite charming sign regarding dogs.

The market is large for a winter market.  There is an area for outside summer booths.  I shopped for dinner and also stopped to have a cup of coffee with milk.  I choose the booths where I shopped by which vendors smiled the most and seemed most friendly to their customers.  I bought brussels sprouts, lemons, garlic, green peppers, broccoli, mushrooms, olives, capers and pears (for dessert).  Doesn't feel like winter to find such bounty!

Posted by boxoftales at 1:42 PM