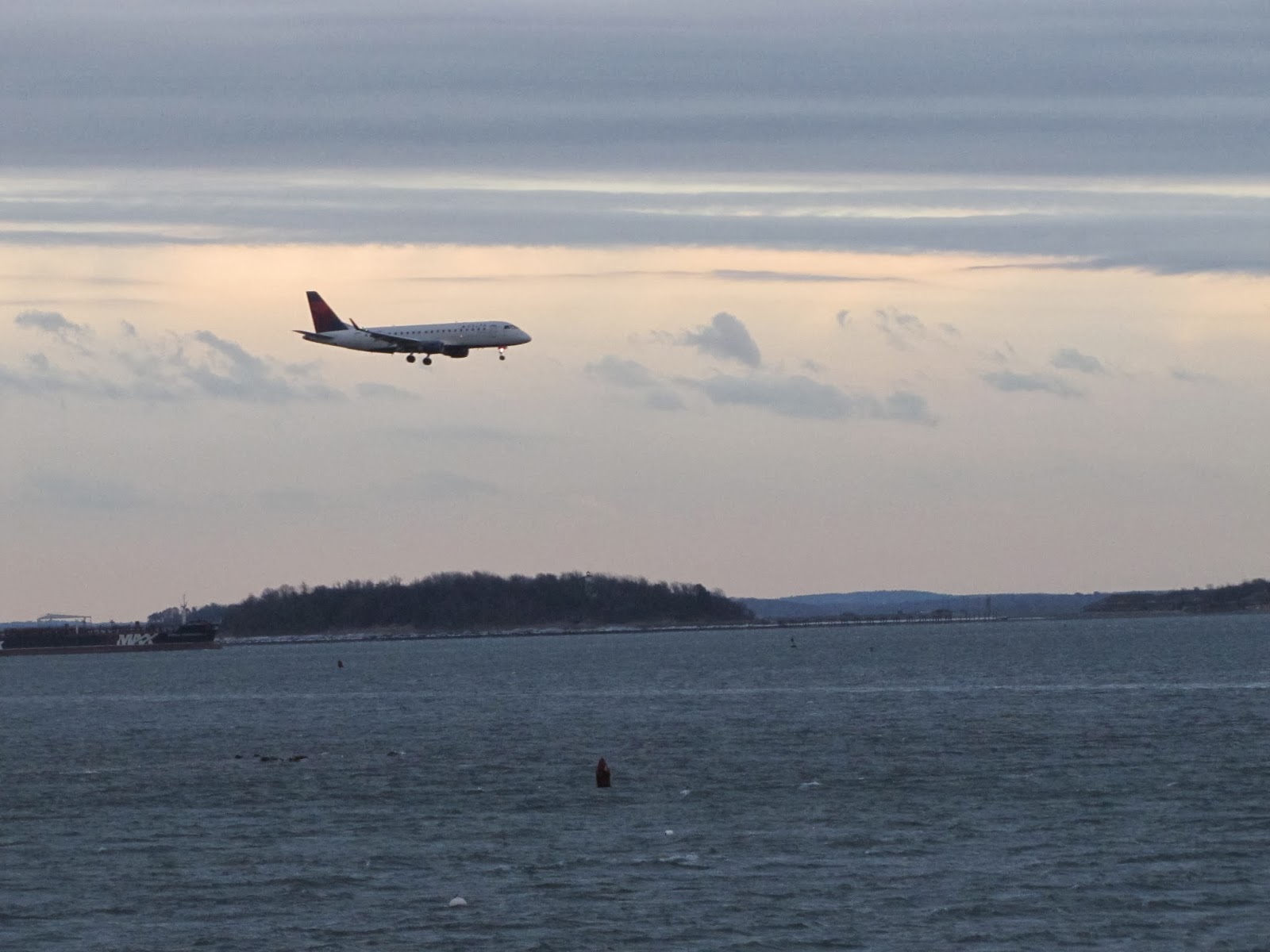 Before I open my eyes in the morning, I hear the planes.  Winthrop by the Sea, my current home, is across the water from Boston Logan Airfield.  Houses appeal to me for their visual interest, but also for their sound appeal. The sounds convey some sense of time before I must open my eyes.  This morning I woke very early and knew by the quiet that it was before 6 o'clock.  No planes.  At home in Walla Walla I listen for birds and the bus that passes on the hour.  I like the sound of fire engines in big cities and seagulls on the coast.  And always planes. 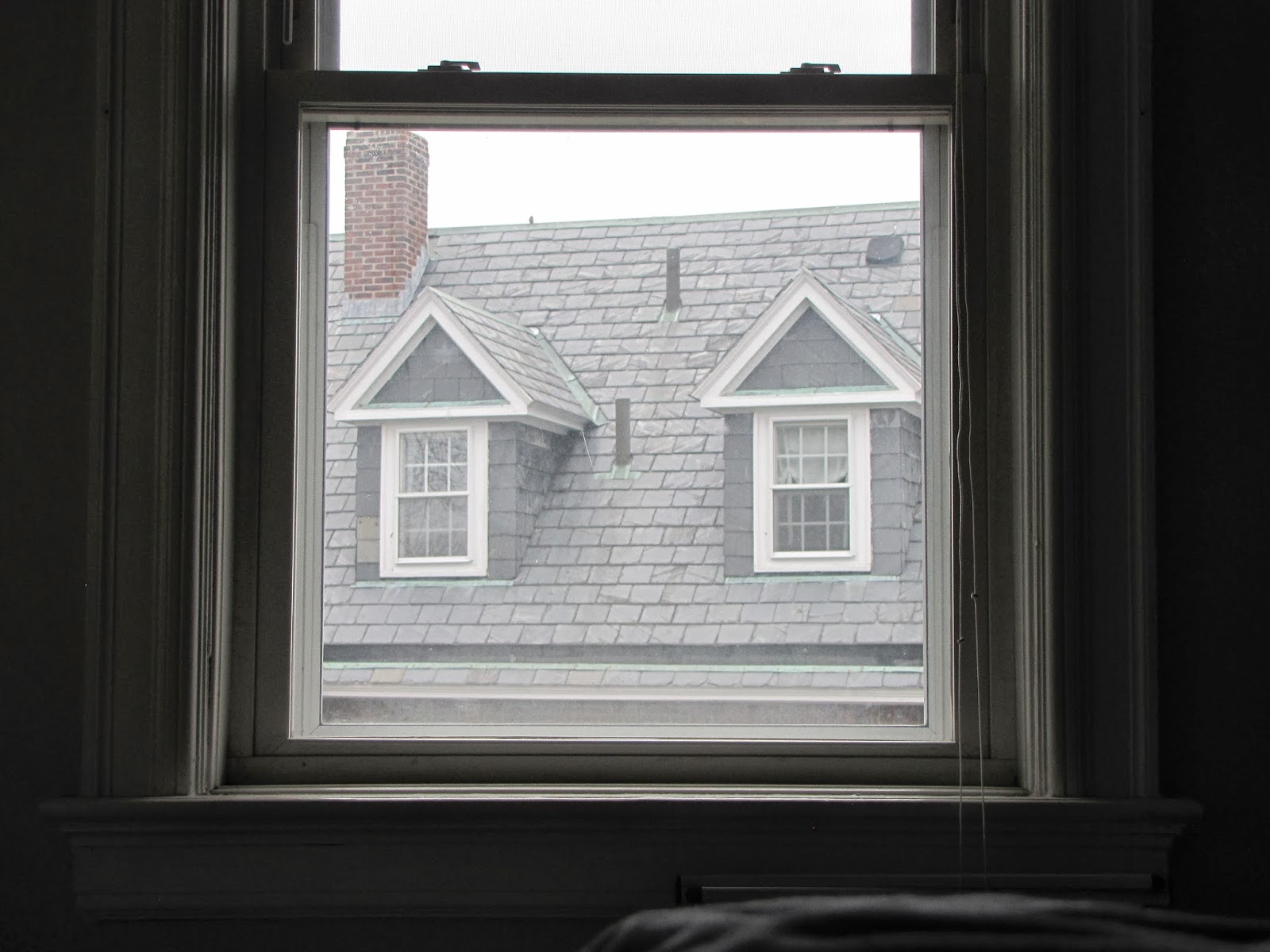 Here by the sea when I open my eyes, these house eyes look back at me!  Dormer windows could sell me a house.  I love their quirky resemblance to human eyes.  I am comforted by these house eyes that have watched over me all night.

My home is quite wonderful.  From the other two windows of my room I can see ocean-going ships, and waves lapping in the bay.  While I worked this morning geese flew by, sparrows chirped, a seagull landed on the house opposite and a light snow moved in across the water.

From one of the windows in the living room there is a particularly nice view. 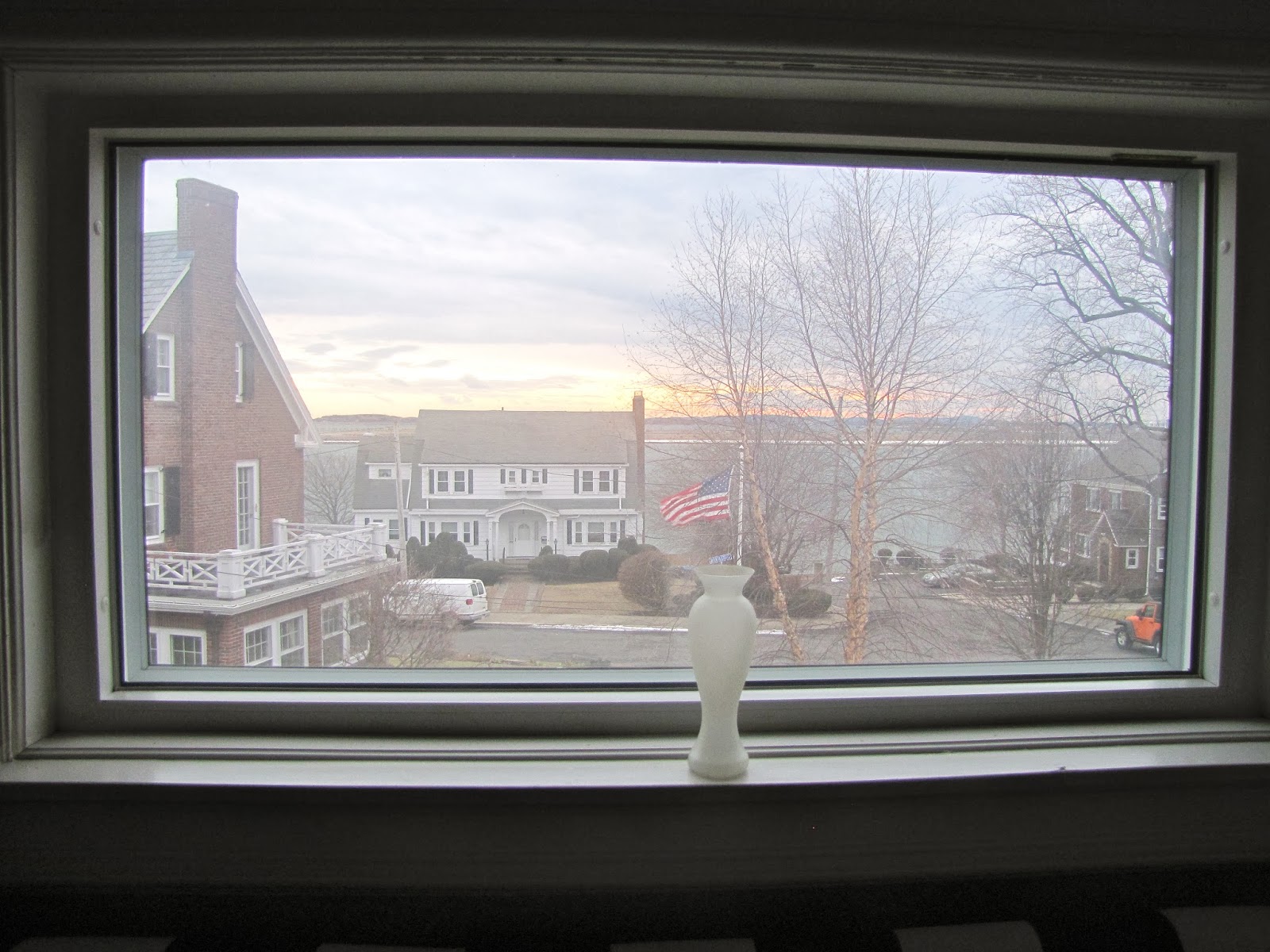 Homes are also about who is in them.  My host here is a fabulous cook and a world traveler.  If you live in the Boston area and need a caterer, look no farther.  Antonio Portugal fixes paella that is truly out-of-this world. 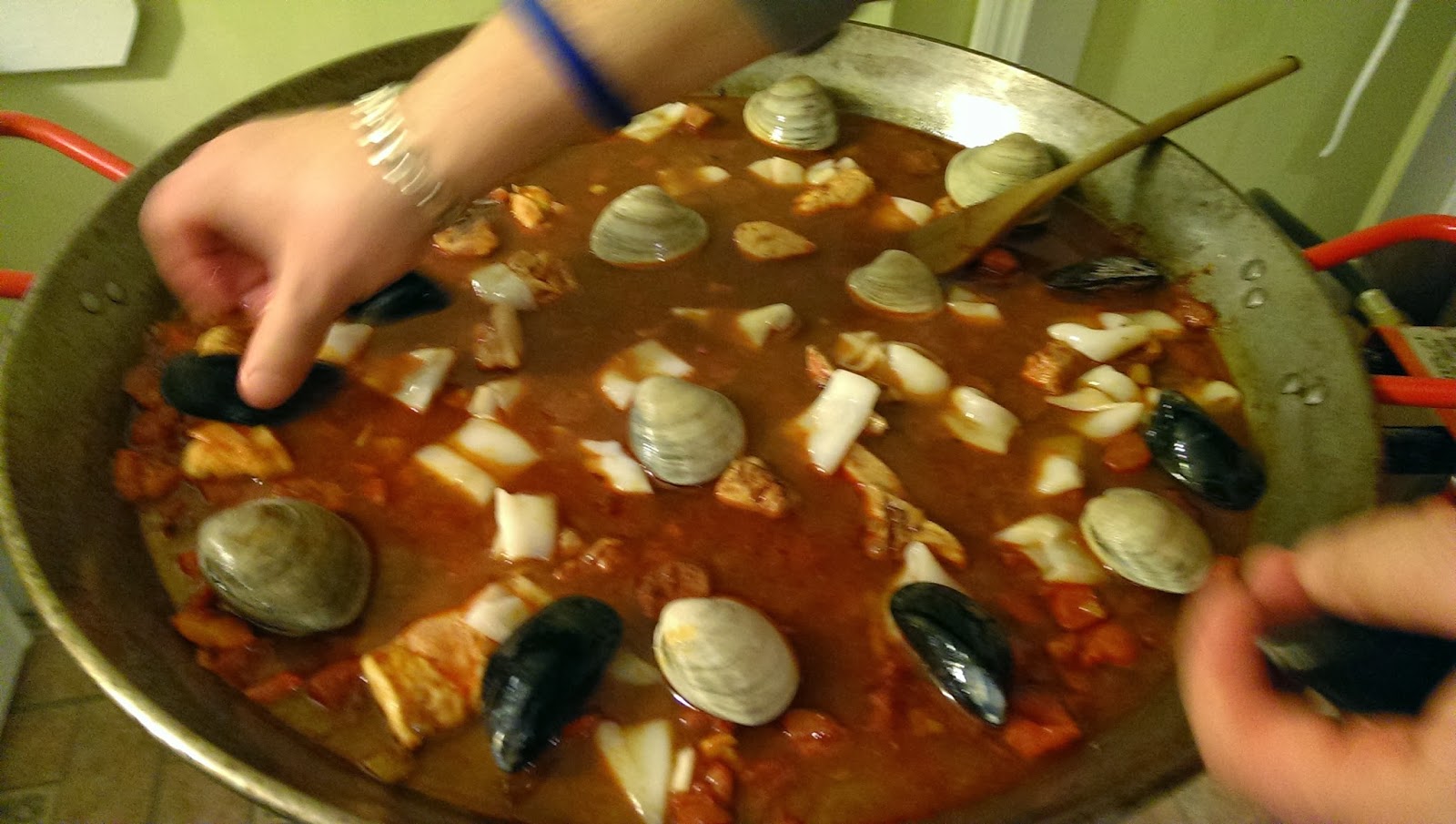 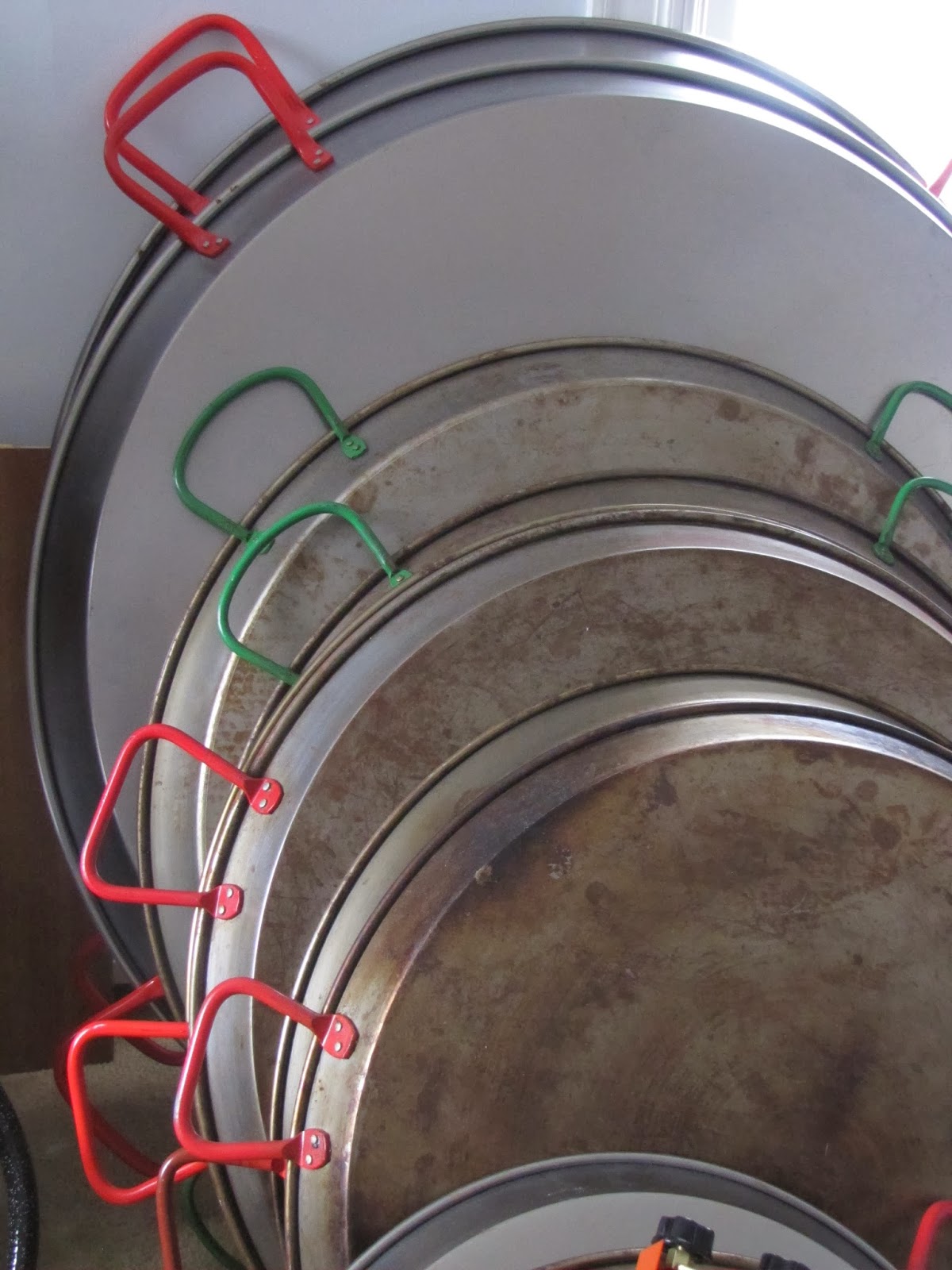 What size paella dinner did you say you wanted?  Antonio's largest pan is the size of a table!  Antonio lived in Portugal some of his years growing up.

He loves traveling and ventures to the back roads of countries as he has done in Iran and Tibet.  He knows that he will find kind, generous and interesting people where ever he goes.  Antonio is a good ambassador for the human race.

Returning from trips, he makes books of his travels.  I haven't had a chance to take a picture of Antonio, so I'm copying one of his self-portraits from his book.  He was camping with a nomadic sheepherder in Iran. 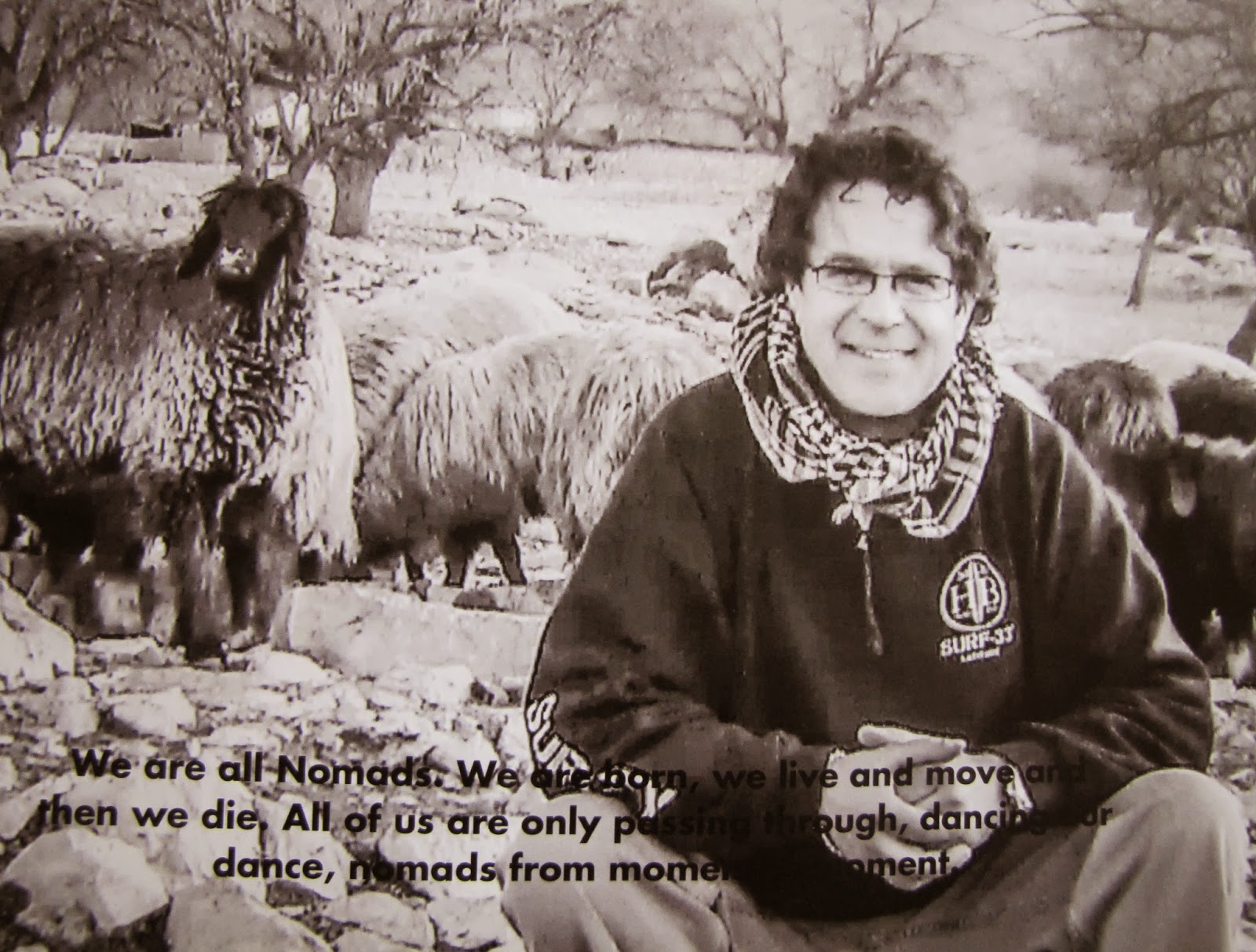 Winthrop by the Sea has the feeling of an old summer beach resort, a village and a commuter suburb for Boston.  I spent an hour at the library looking through reverse phonebooks from the early 1900's to see if I could figure out if the home where I am staying was always two dwellings or just one.  The earliest record that I could find listed two.

The largest domiciles in the neighborhood are often multiple family residences.  Here are a few examples with each family having an entire floor. 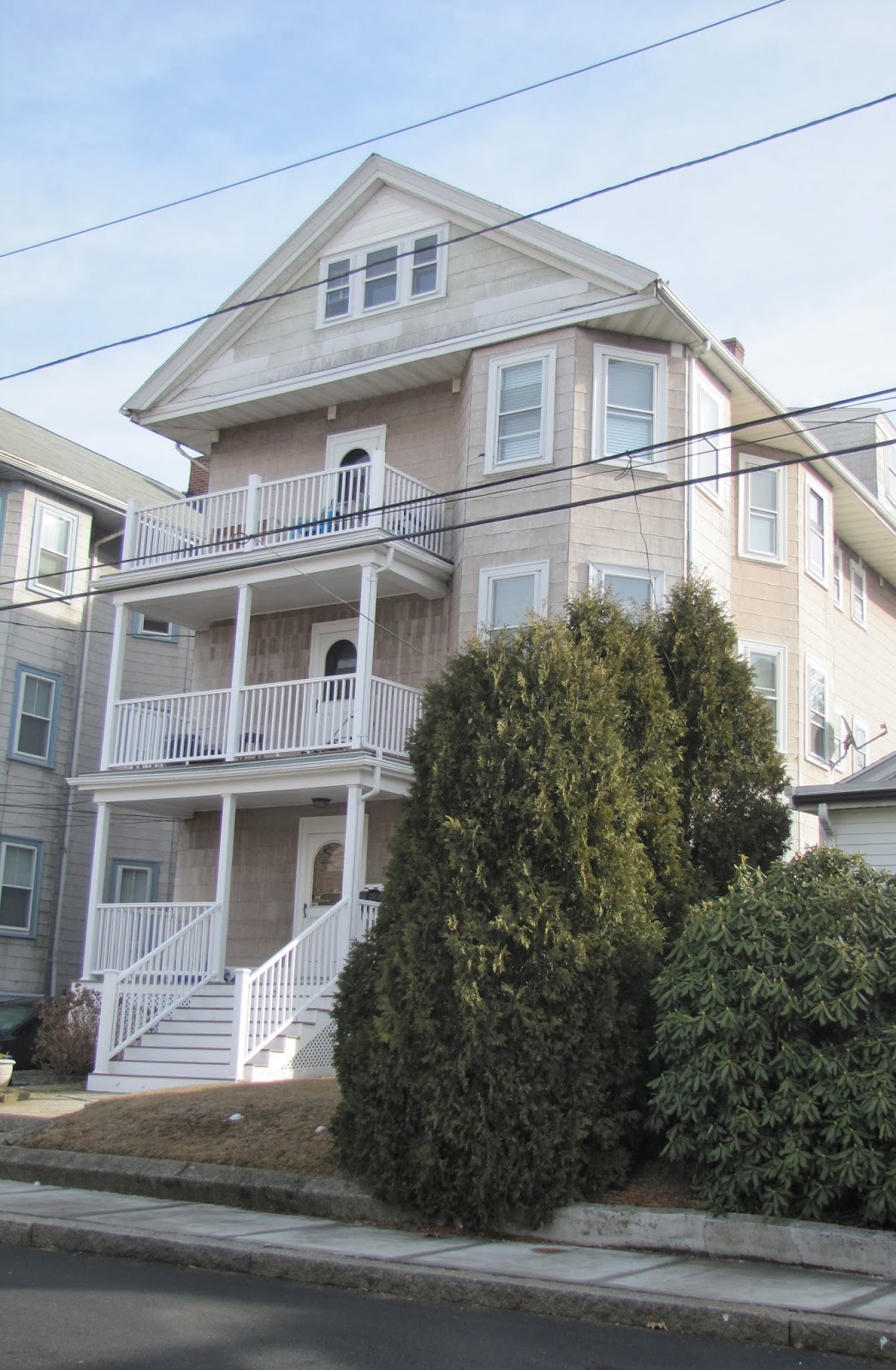 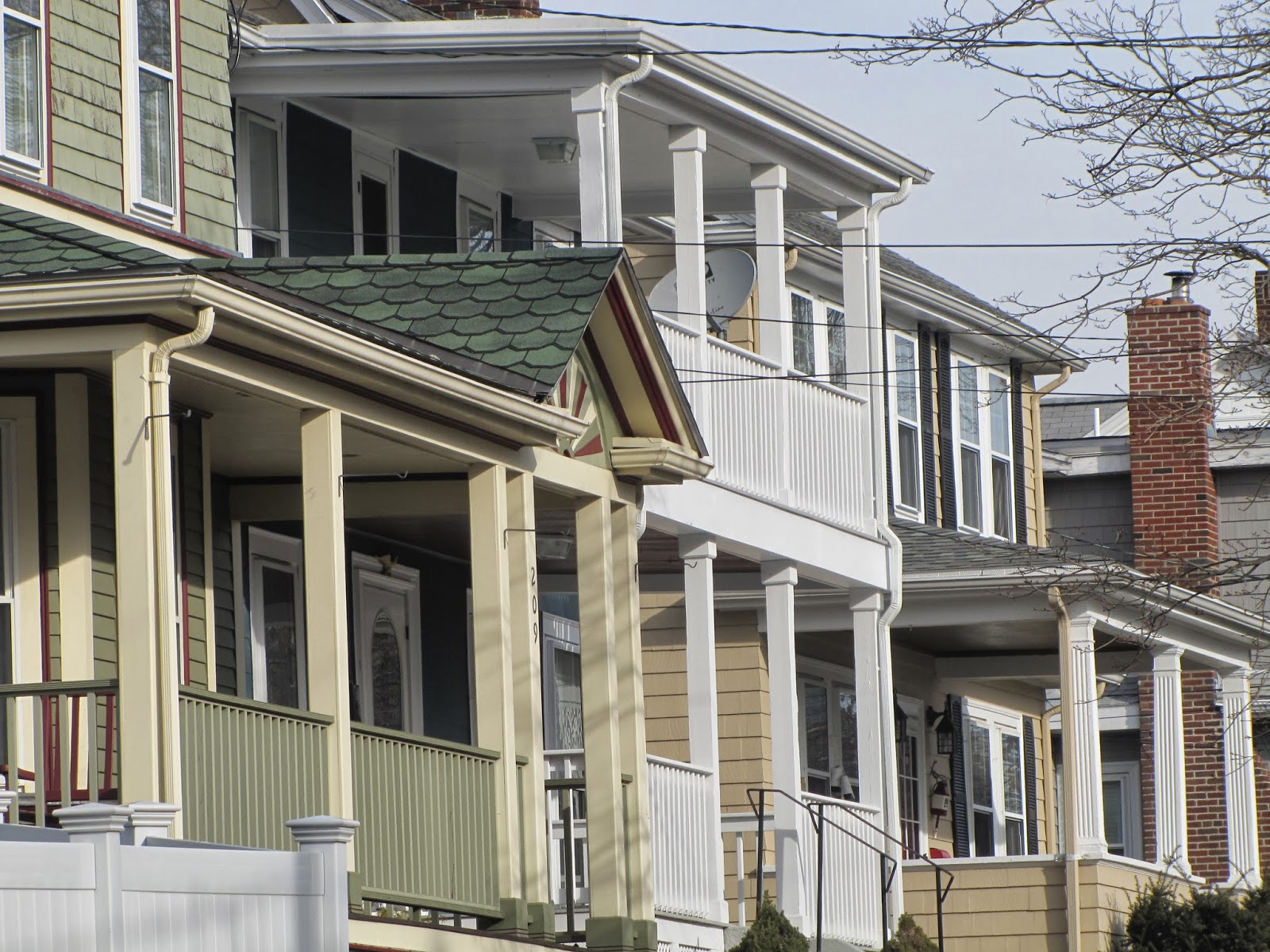 Most streets have homes tucked close together.  Almost all of them have a porch.

Close by my house is the childhood home of the writer Sylvia Plath.  She left Winthrop when she was eight years old when that her father died unexpectedly.  Her home is this muted stucco one on the bay. At first I was puzzled trying to connect this beautiful home with the depression suffered by Sylvia Plath, but her father's death explains much.  She described the years in Winthrop as "sealed themselves off like a ship in a bottle-beautiful inaccessible, obsolete, a fine, white flying myth". 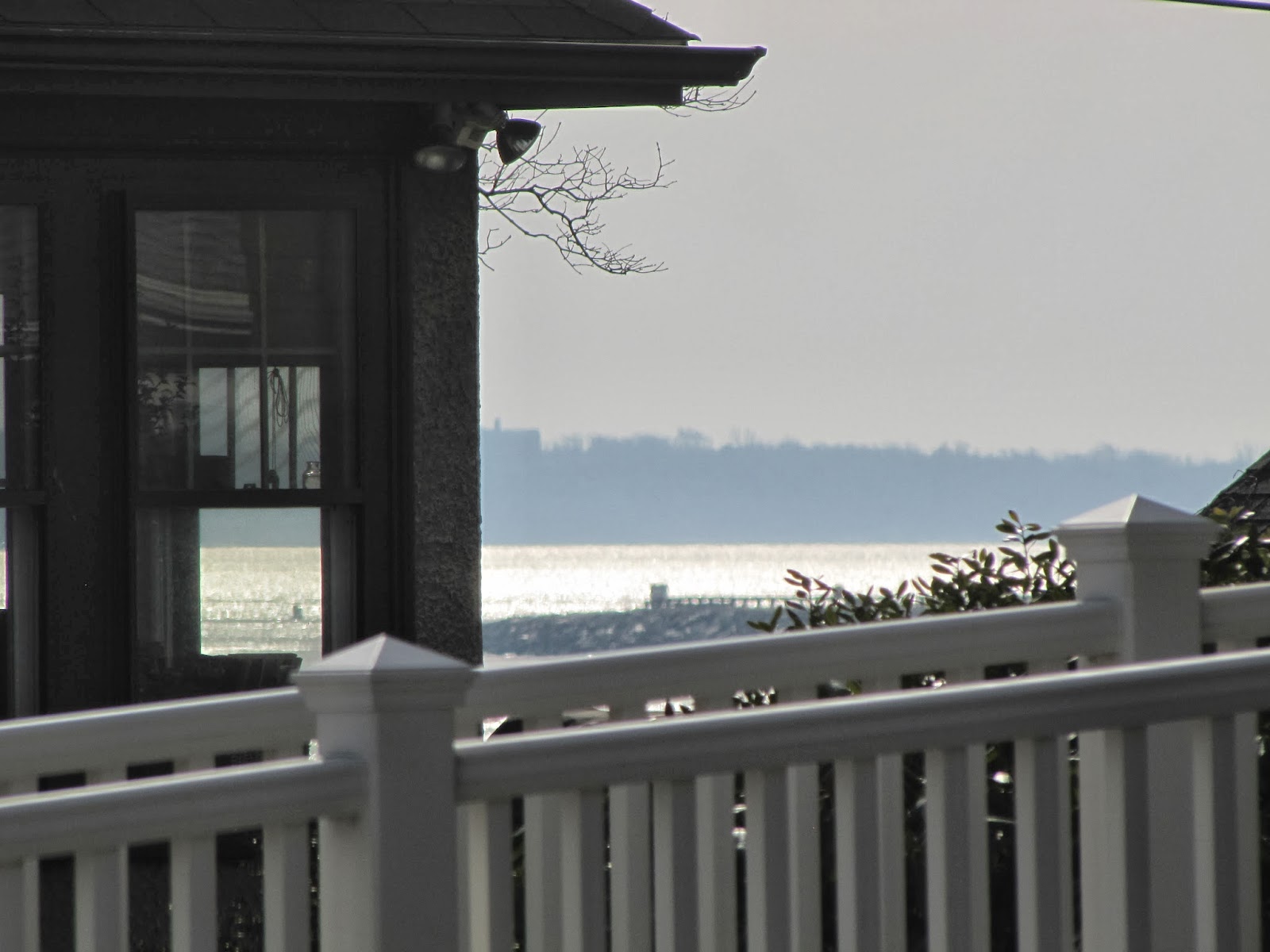 Sylvia may have spent many wondrous days looking out this porch sunroom and playing at the foot of the seawall.  One hopes there were times of joy in a life ended so prematurely.

I'll leave you with this Winthrop door.  You can exit the blog and go about your day! 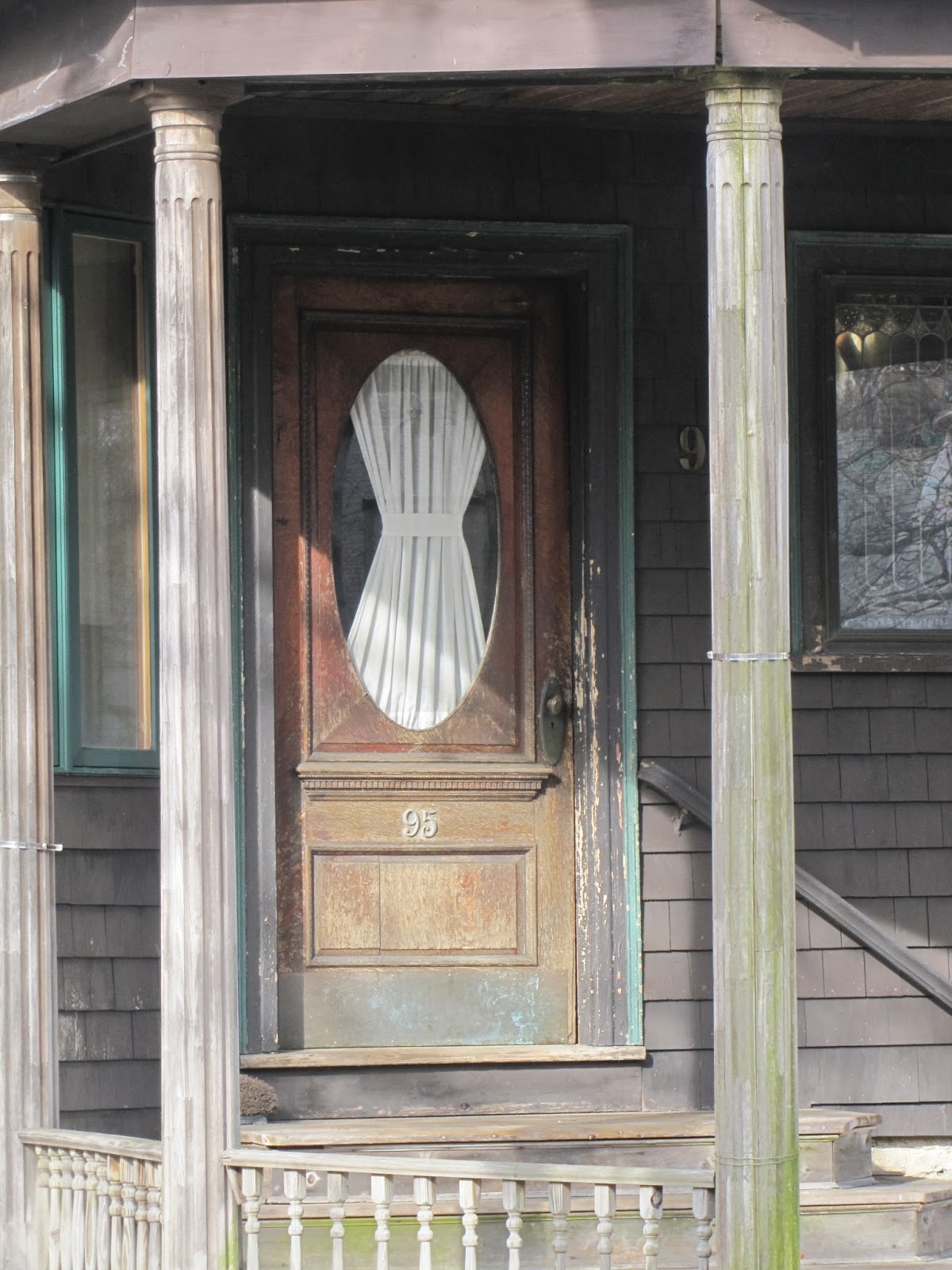 Posted by boxoftales at 5:02 PM