Arcosanti, the Vision and the Reality 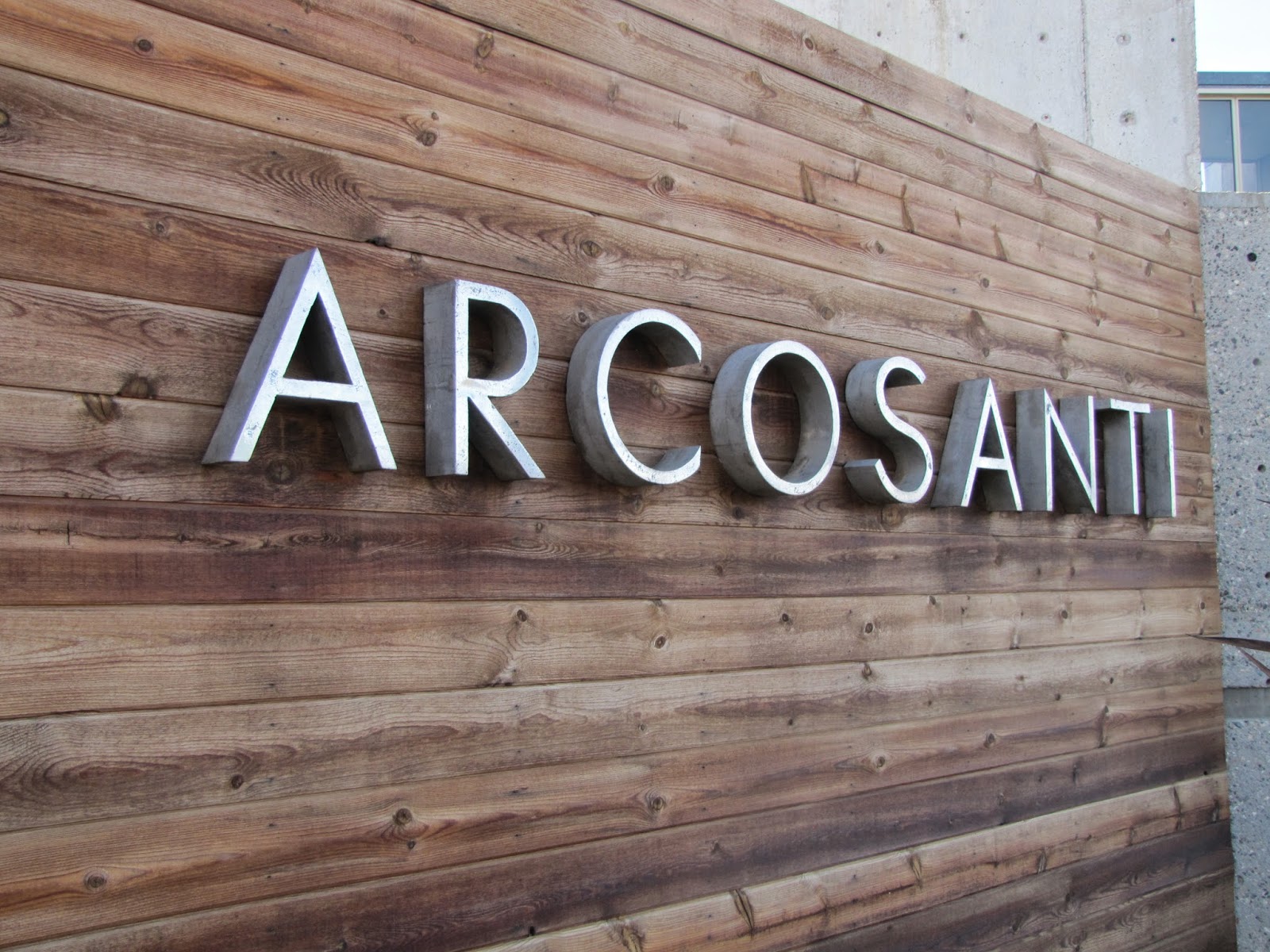 In the 1970’s and Italian-trained architect Paolo Soleri purchased land north of Phoenix and began building his architectural vision Arcosanti.  For the past forty years more than 7,000 volunteers have come to this desert site to help him build an urban ecologically-driven community for 5,000 people.  I have wanted to visit the site for many years.  When I heard that there were rooms to let, I detoured slightly to stay one night.
All night long I could hear crickets, and frogs with a gentle canyon breeze blowing in the window.  Pup and I had arrived in early evening and with some difficulty located the key (in the cafe).  There are only 10 guest rooms located on a lower road facing the canyon.  Rooms are a reasonable $30 to $40 with comfortable beds covered with thick soft plaid blankets.  The climb from the parking lot to the room was steep, maybe explaining why most guests were in their twenties. On the backside of the hill were more structures housing the people who were attending workshops.

I slipped out early in the morning and headed up the hill to the cafe treading paths choked with weeds, past work sites that looked abandoned finally arriving at the top of the hill where buildings and grounds were slightly better maintained.
Paolo Soleri’s genius was in his design work.  He has won numerous awards and inspired a 2013 documentary titled "The Vision of Paolo Soleri: Prophet in the Desert". His philosophy changed the conversation regarding how to create communities.  The fraction of buildings that have been completed are fascinating in design.  The concrete forms were often constructed over dirt mounds, joined together and then judiciously placed to maximize solar heating and cooling. Every structure was unique.

Unfortunately I had expected so much more than what I found.  Paoli Soleri at 93 years old died in 2013.  One year after his death is not sufficient to explain the inattention to maintenance details.  The squeaky doors, the lackluster service, the weeds, windows piled with junk or old curtains, odd old chairs here and there all lent a sadness to the vision.  The site is puzzling.  I came to think of it as though Soleri had birthed a creative child, who then exhibited absent-minded tendencies.   I am puzzled how the neglect and disarray goes unnoticed.  The organization is now guided by a board.  They are in the process of making a long term plan.  The money raised from selling bells unfortunately barely covers the expensive of maintenance.  As our guide explained, the organization has tried not to "sell it's soul to developers."  Concerts, workshop tuition and other events are not sufficient to proceed with any rapidity.
I stayed to take a tour.  Prior to beginning work at Arcosanti, Paoli had begun his career casting bells in clay and metal.  This work has funded the building of Arcosanti for most years.  Bells are still made on site.  Visiting the working areas was a pleasure. The bells are quite unusual, but the genus of Paoli was in architecture.  The outside workshops were designed to be cool in the summers and warm in the winters.  This is a photo of the work site for the clay bells cast in silt or molds. 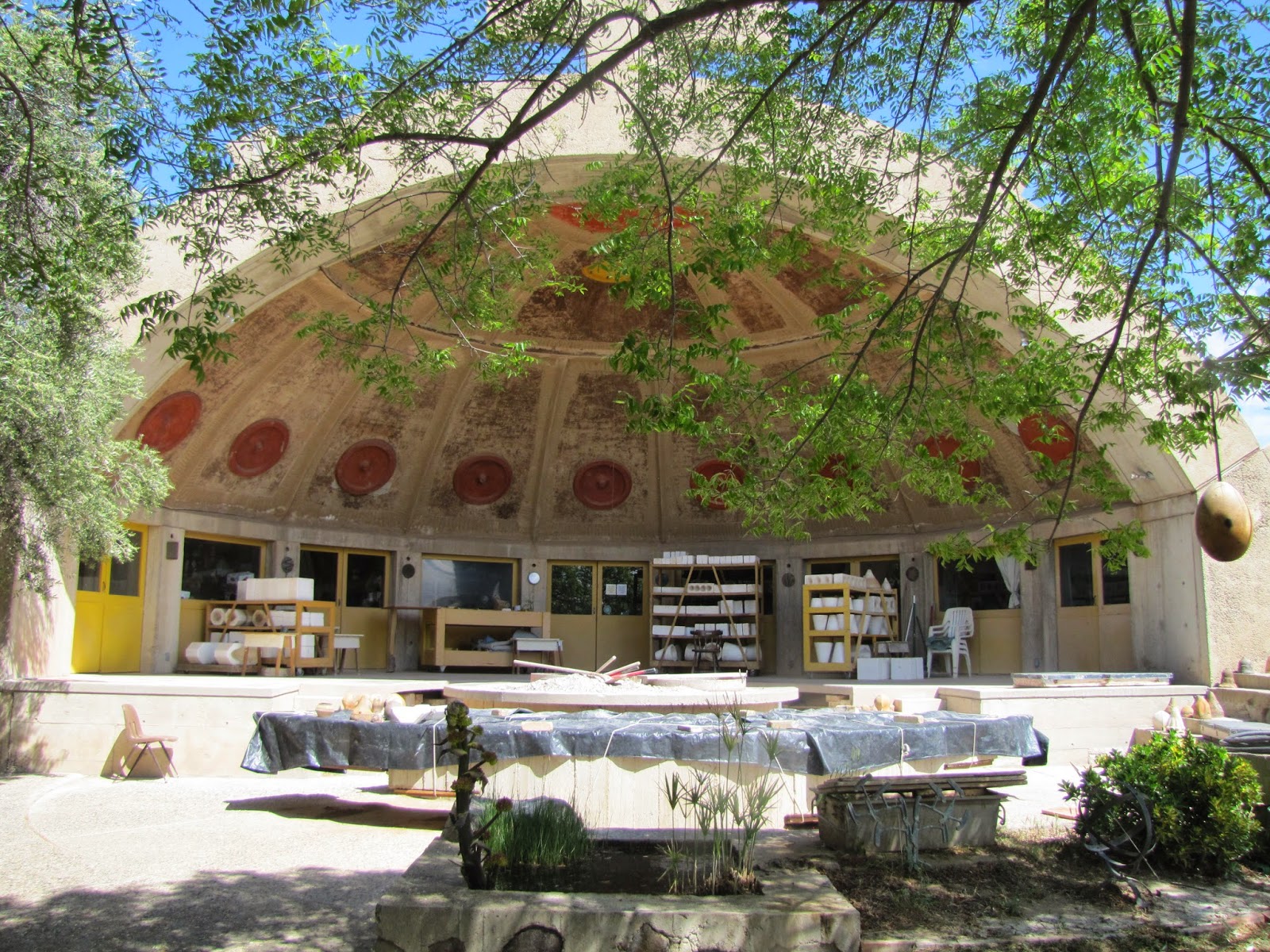 Near by in another arched structure the hot work of casting bells obviously called for great care. Tools were carefully stored.  The heat from the furnace helped heat the artisan's studios above the workspace in the winter. 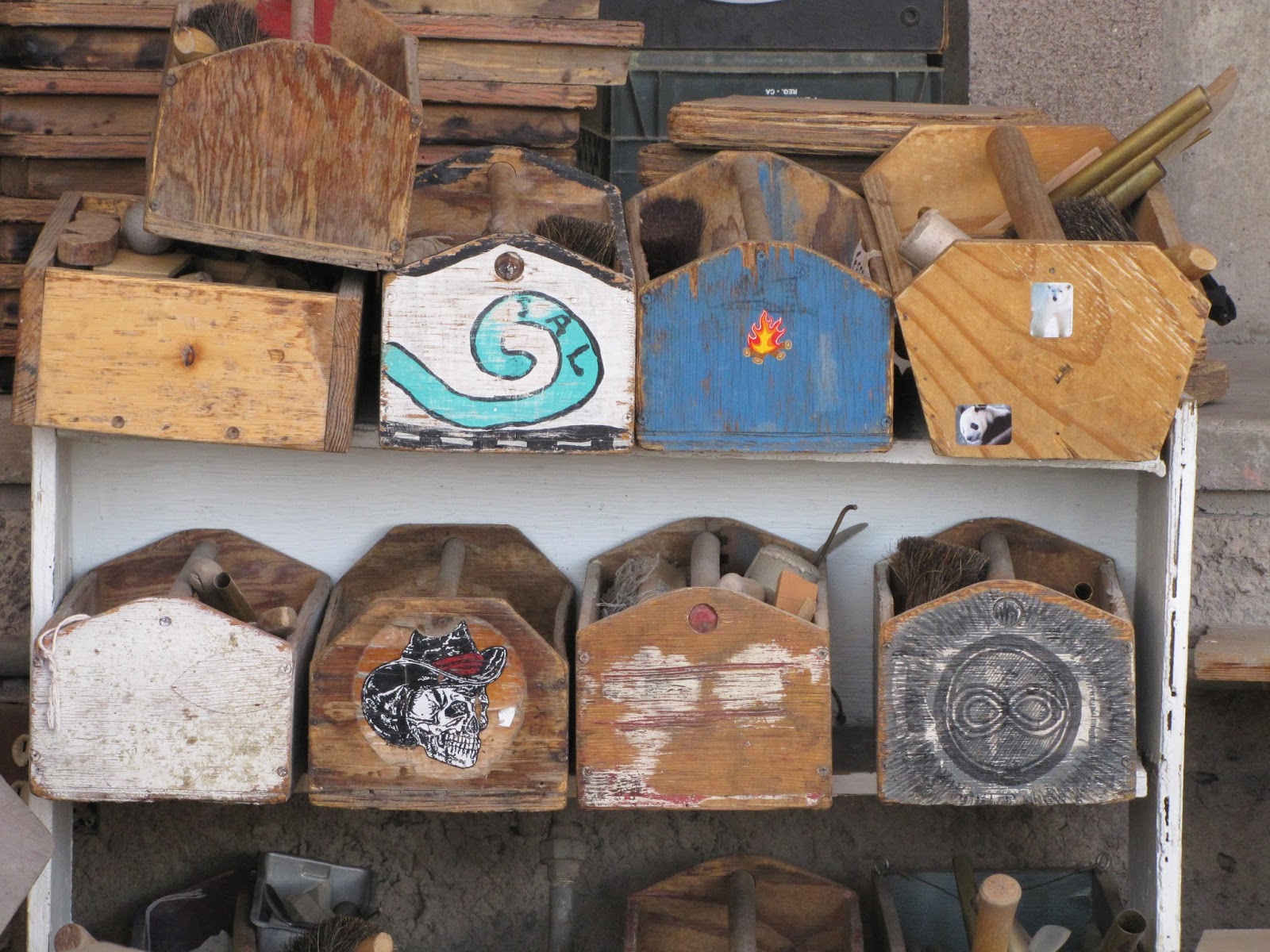 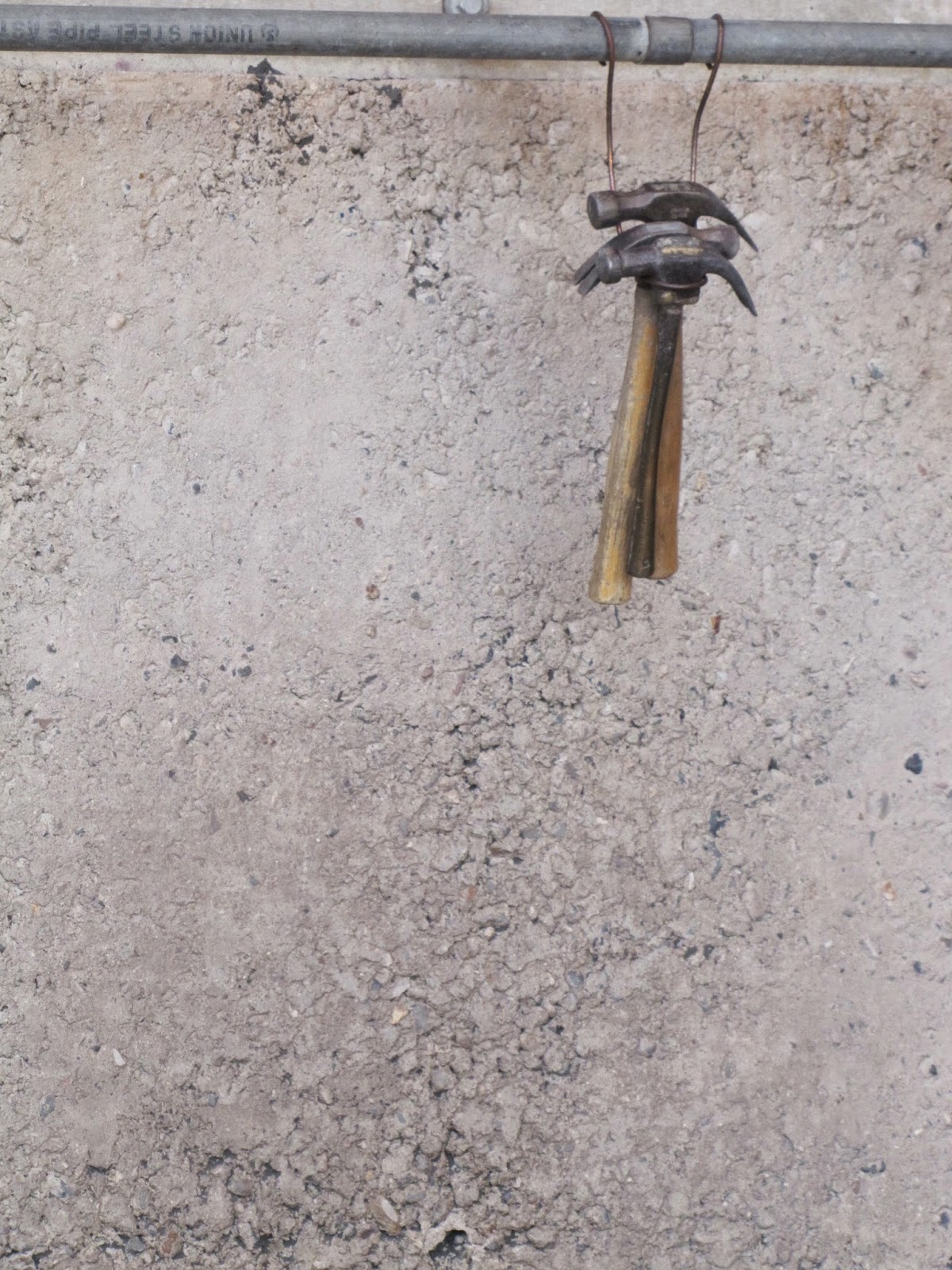 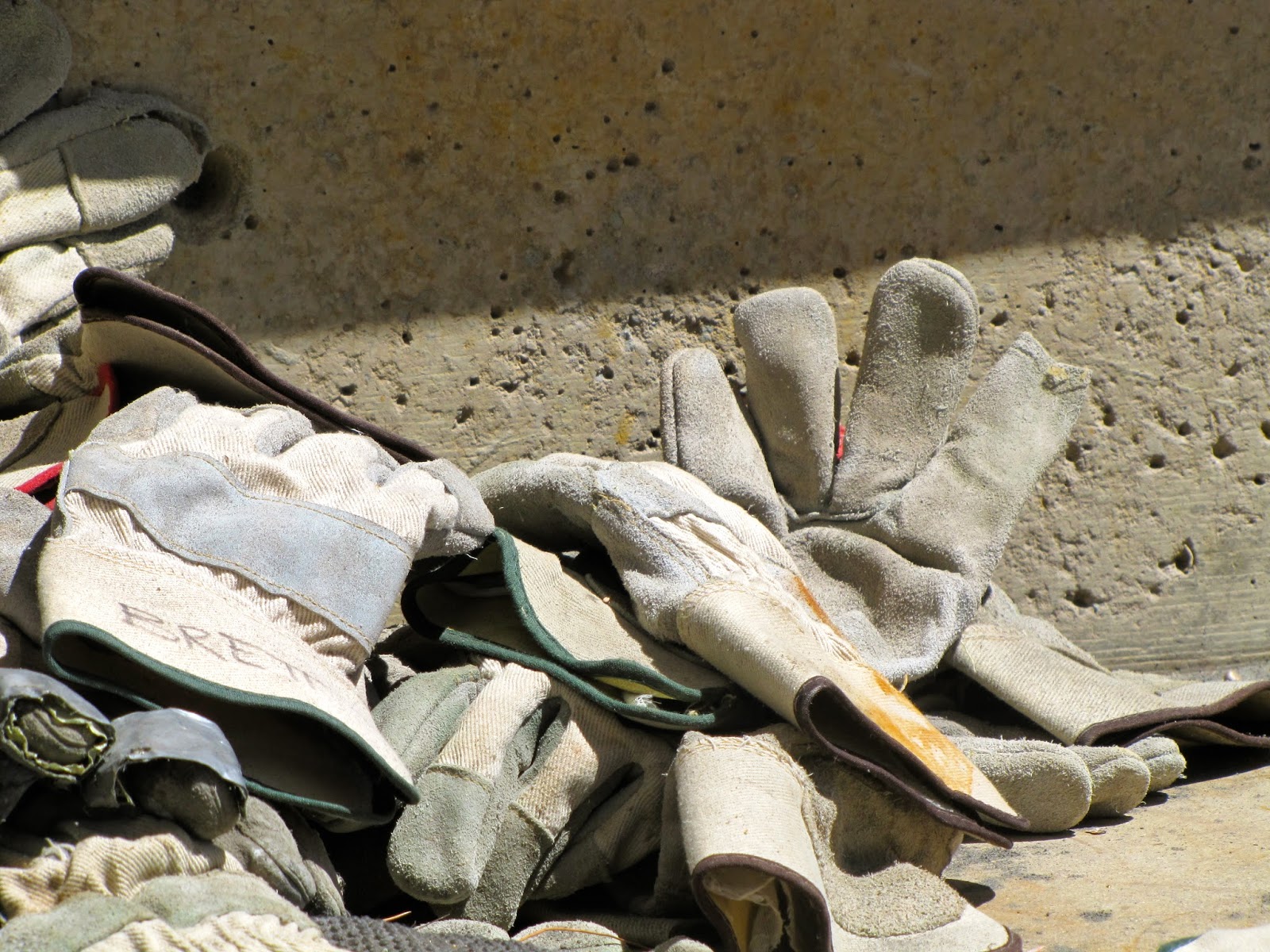 The structures designed as community gathering areas have a wonderful feeling.  When we visited the one below children were whirling around on tricycles.  A few children live here and attend schools nearby. 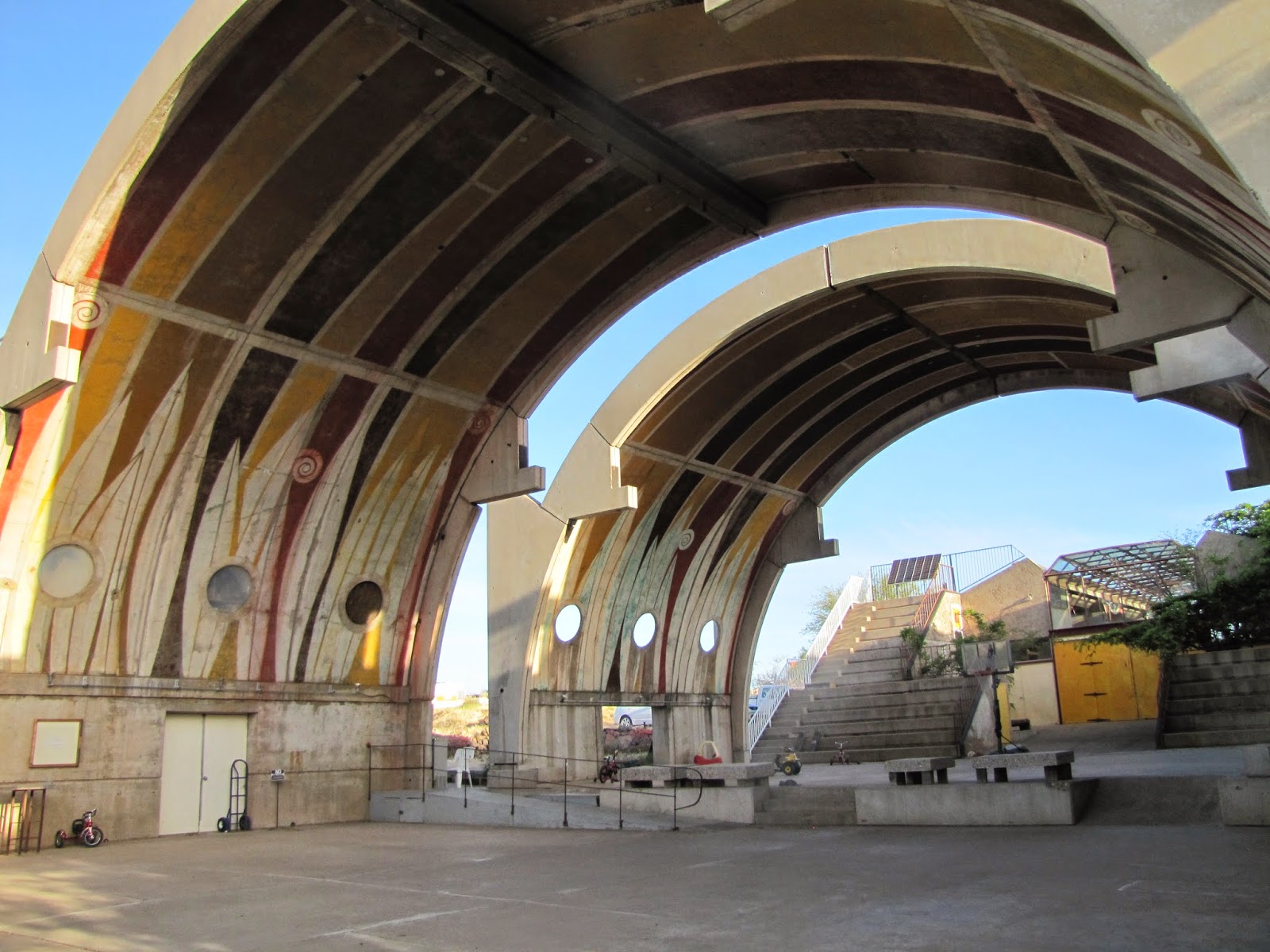 The main gallery and cafe were pleasing to the eye. 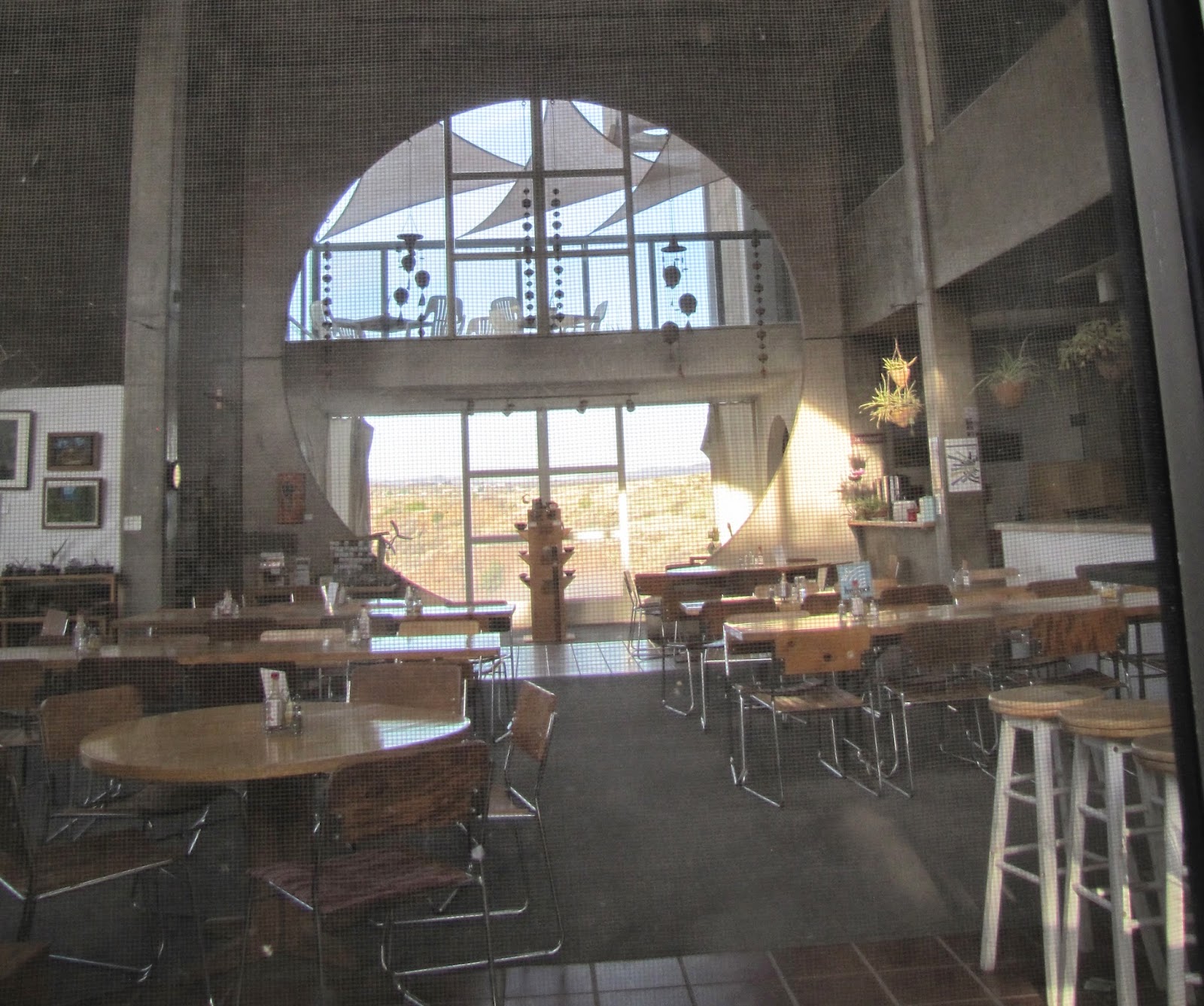 I would recommend a visit only if you understand that the site will feel somewhat disheveled.  (I purposely did not include photos of neglect.  Possibly by the time you visit, things will have changed.)  Maybe go for a concert or to watch the bells being made.  Do visit, but understand that the genus of the community might not be realized for some time.


Consider buying a bell.  Support this dream, it is worthy of our attention.