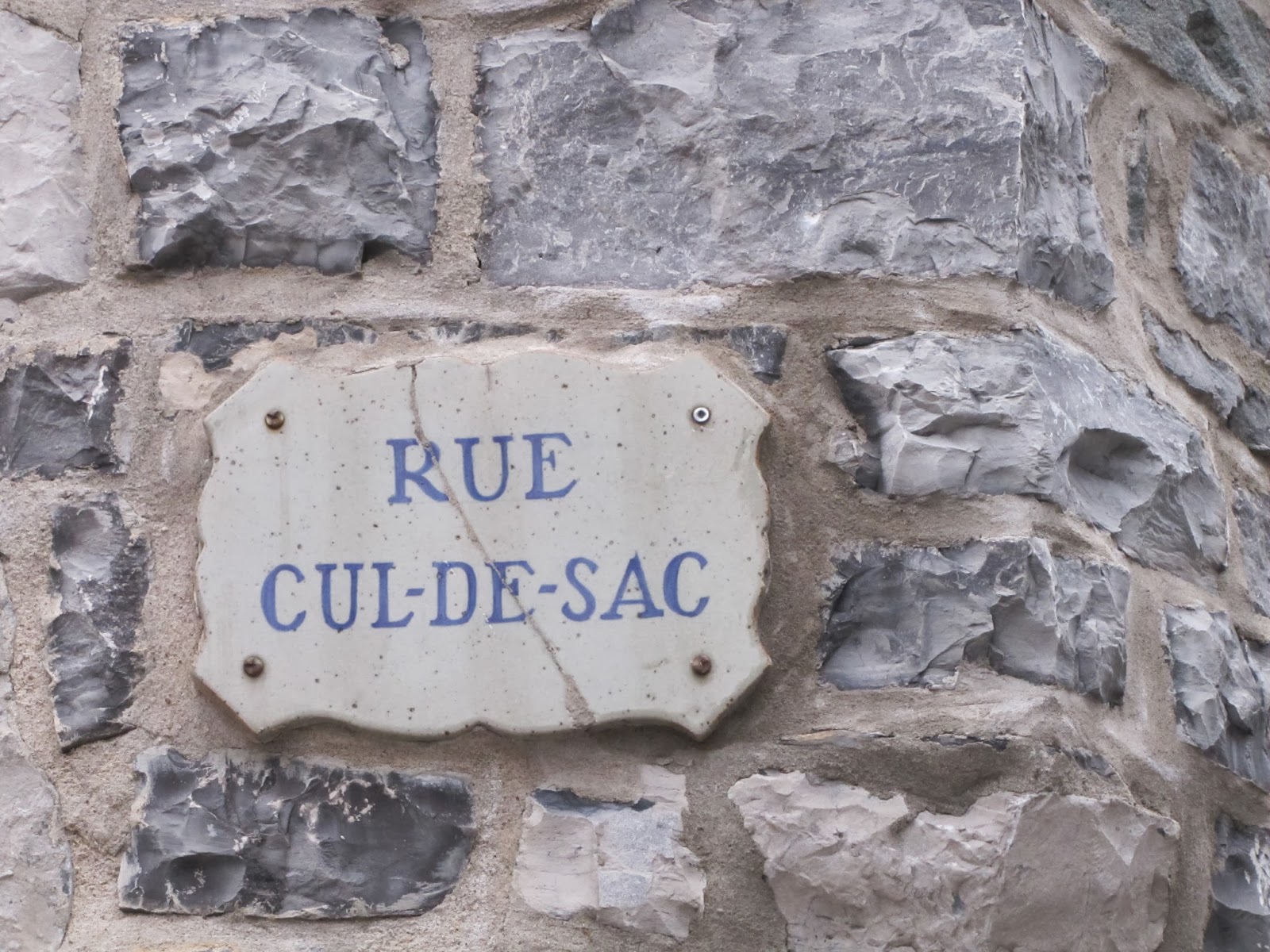 American suburbs make me think of cul de sacs.  You may live on a cul-de-sac.  I felt rather silly when I saw this sign and my first thought was that I was seeing an American expression!

Quebec felt like a cul de sac.  I had tried to get there on a tour bus, but the bus was canceled twice for lack of interest and once again for uncooperative weather. I felt like I was at a dead end.  Finally, I checked to see if it might not be easy enough for me to go by ordinary bus and be my own tour guide.

The oldest portions of the city are on a headland.  A cliff abruptly rises from the dock areas.  The extraordinary Chateau Frontenac hotel dominates the hill.  The city exudes old world charm.  However, the approach to the city is along a highway lined with new car dealers. The highway makes a sudden transition into older suburbs.  I thought that the city had missed an opportunity to line the road with parks instead of car lots.  The transition would have been less disconcerting.

At the bus station I asked the easiest way to get up the hill and young man cheerfully pulled out a map to show me how to wander around the base of the hill before climbing stairs.  When I pointed out a road that was closer, he warned me that it was steep; my gray hair emanating a warning.  I took the road. I walked through an interesting neighborhood to the top. 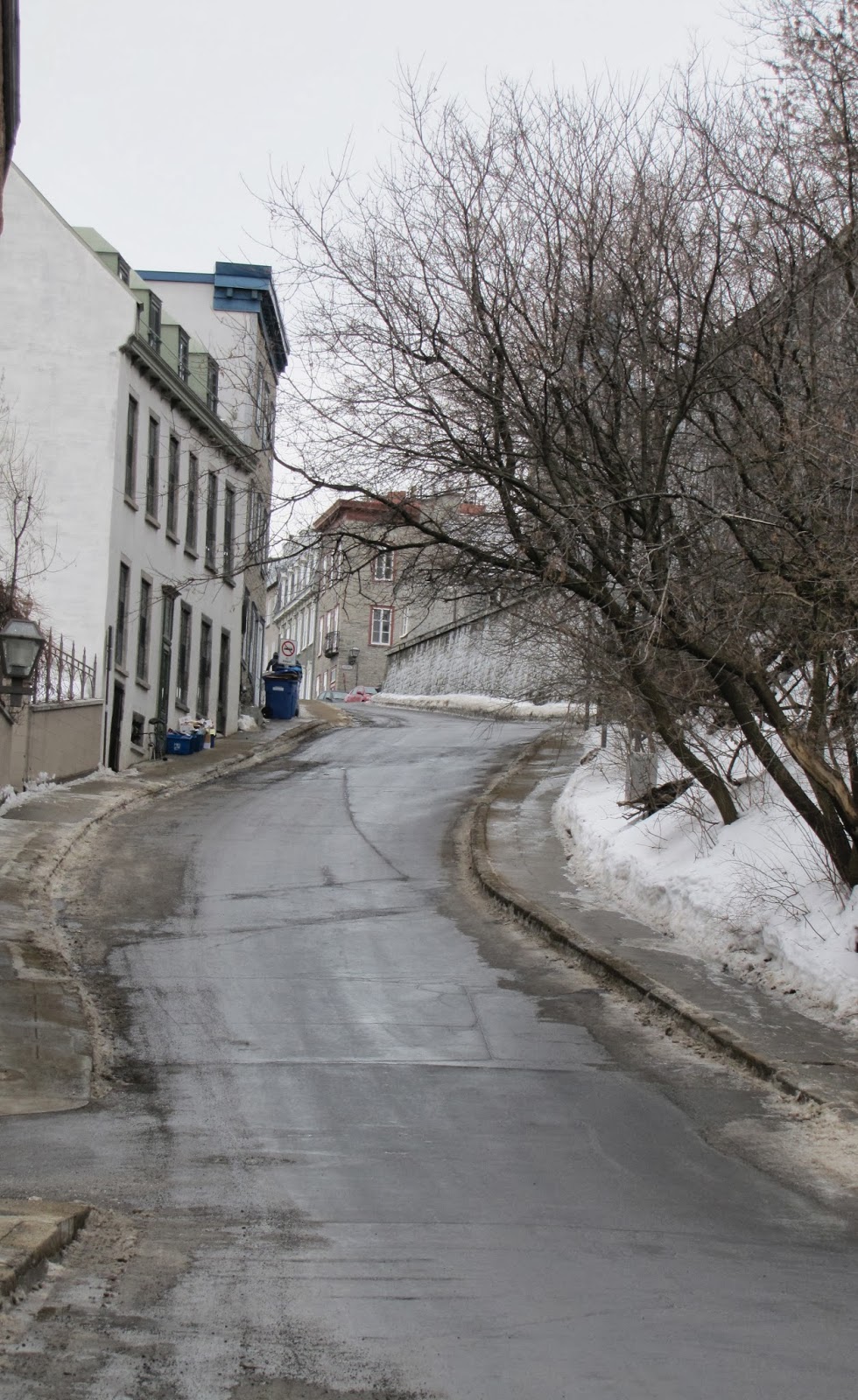 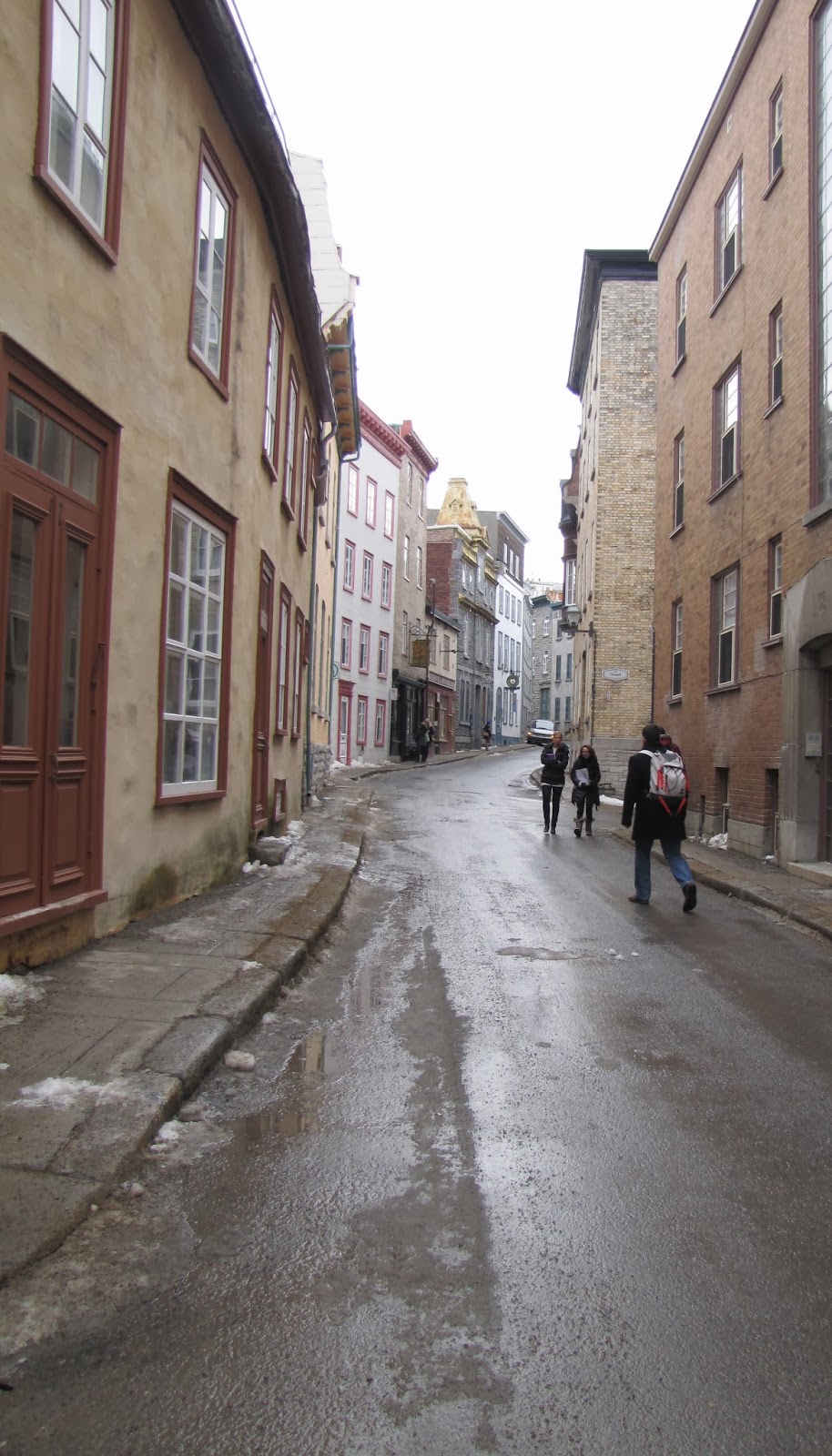 I had hoped to arrive early enough for a little sun.   Snow was predicted to fall late afternoon.  The acclaimed boardwalk along the cliff was my first destination.  The boardwalk gave me a good view of the river and it’s traffic.  Tugs slid out to guide a large ship to port.  The “No Smoking” sign signaled a load of petroleum products of some sort. 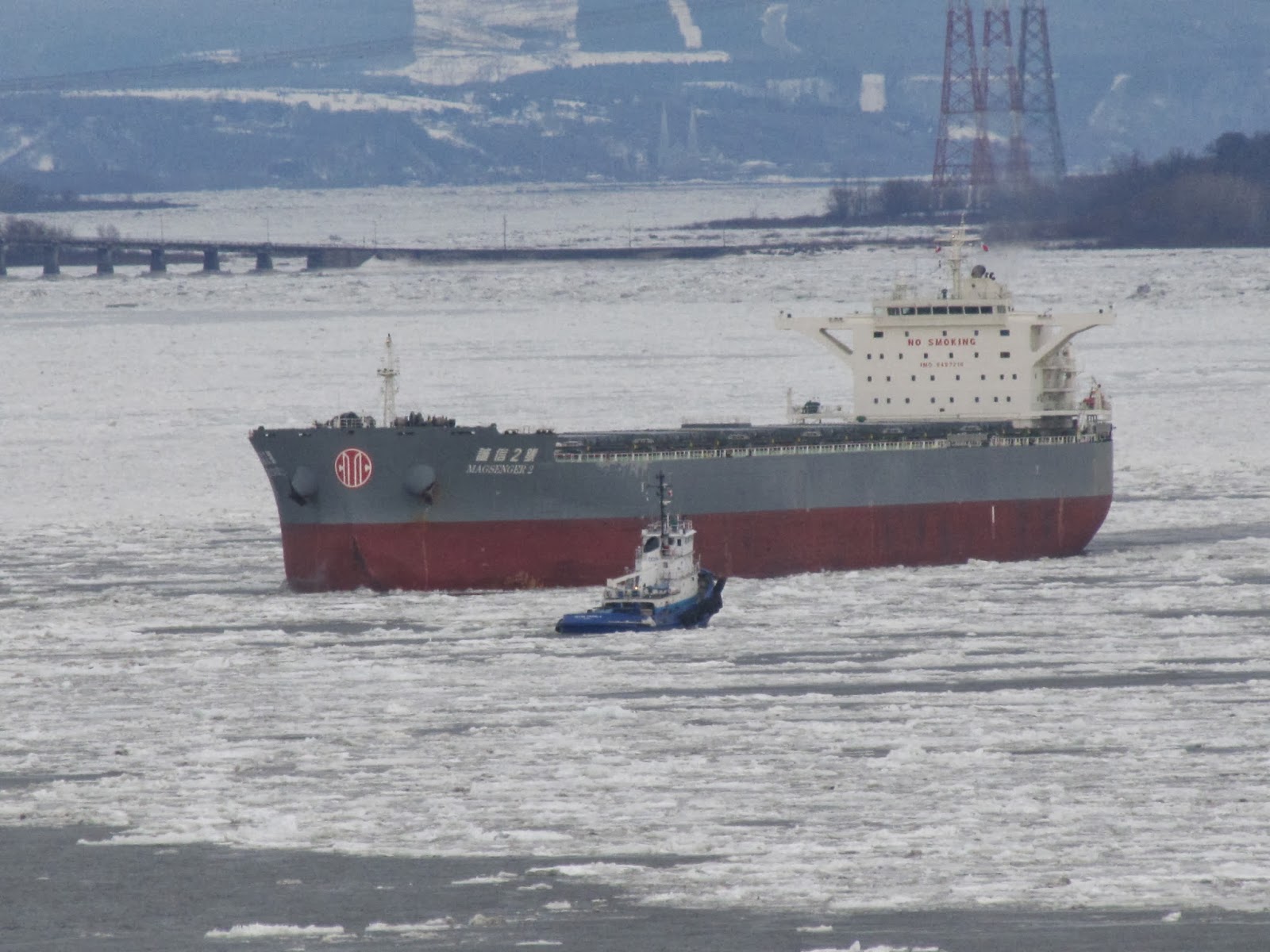 A ferry knocked the river’s ice aside crossing back and forth.  A river Metro system. 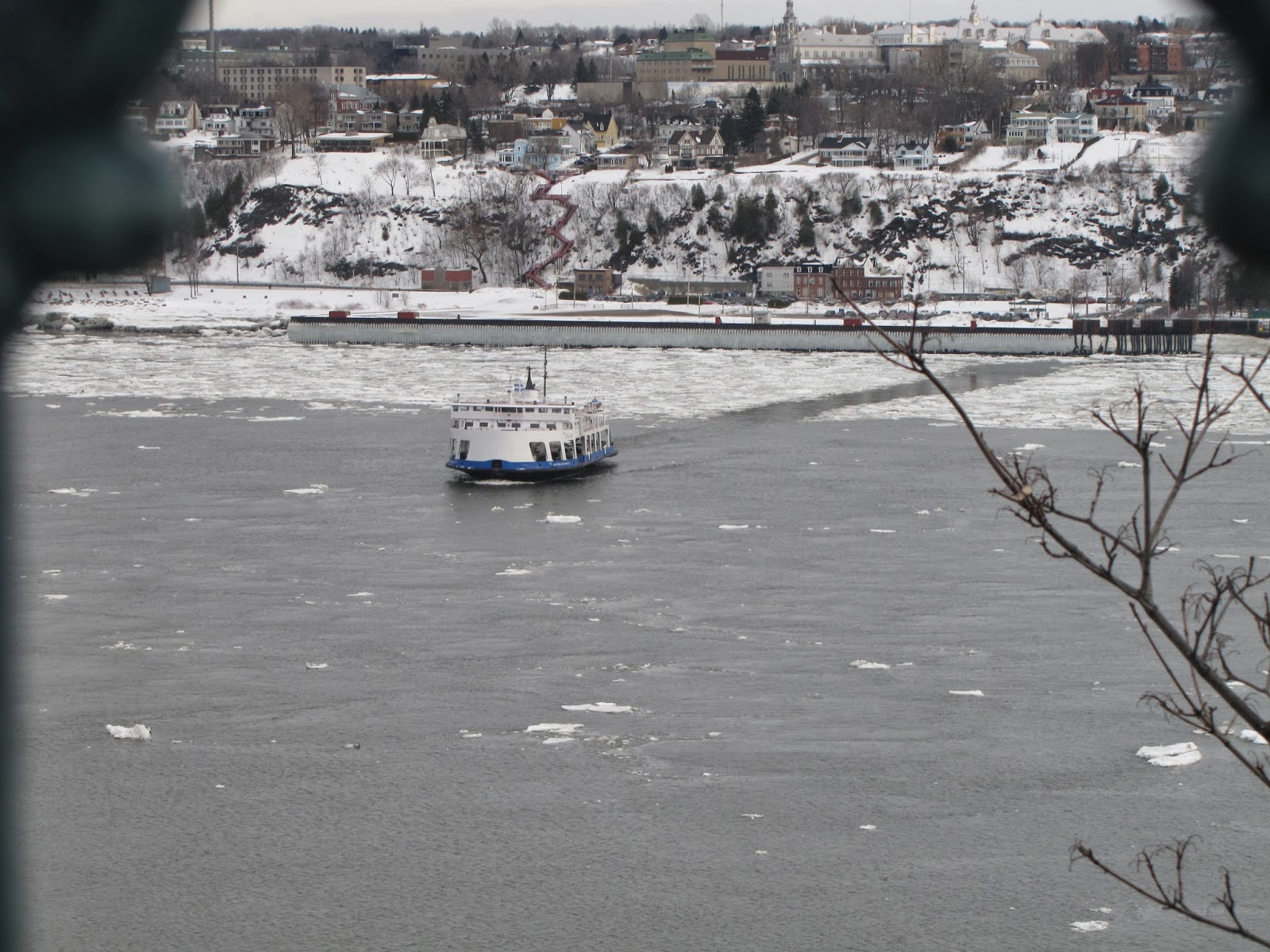 Buoys lined the dock indicating a shifting river.  The tug in the area curiously is marked “Ocean”. 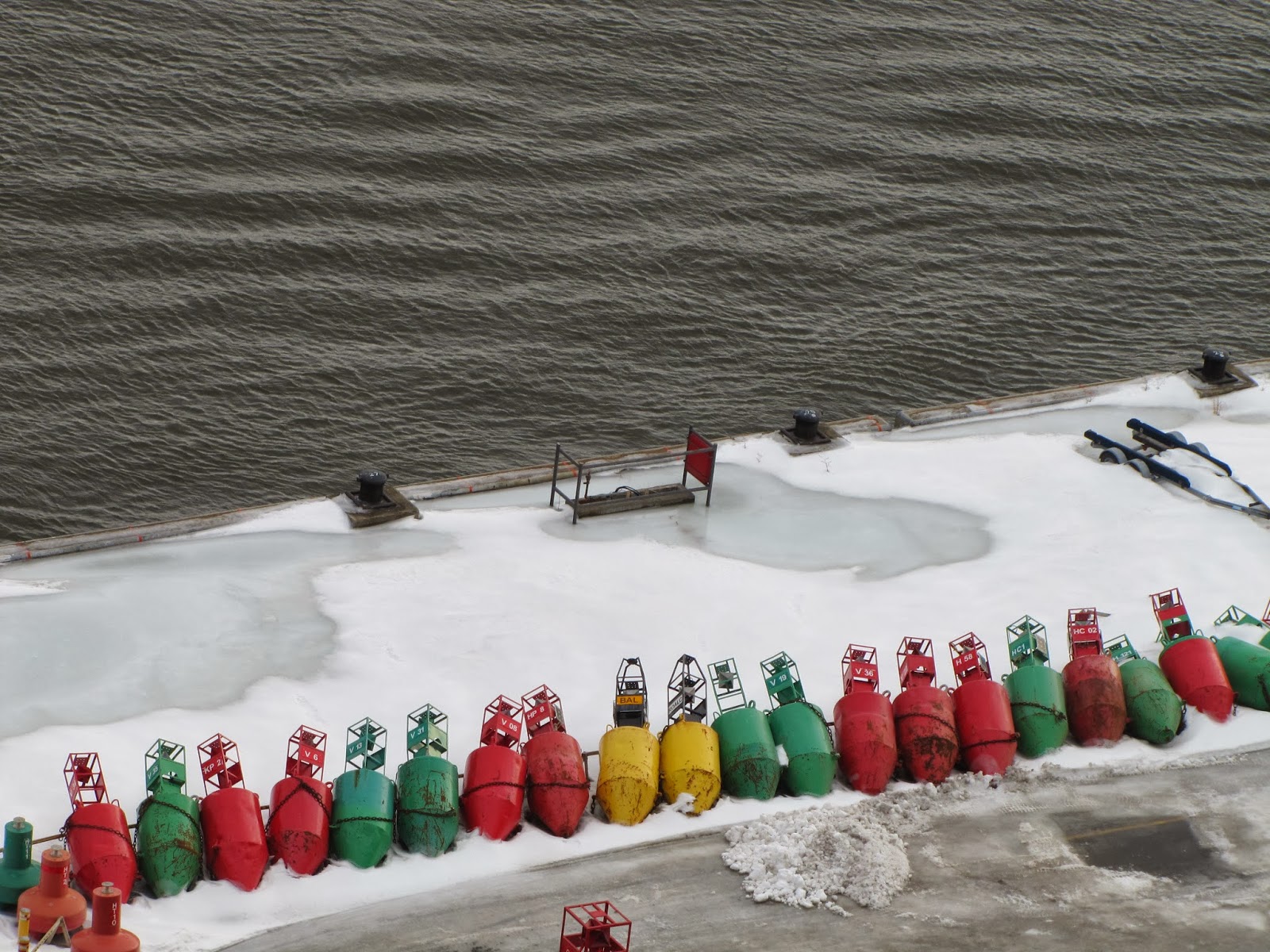 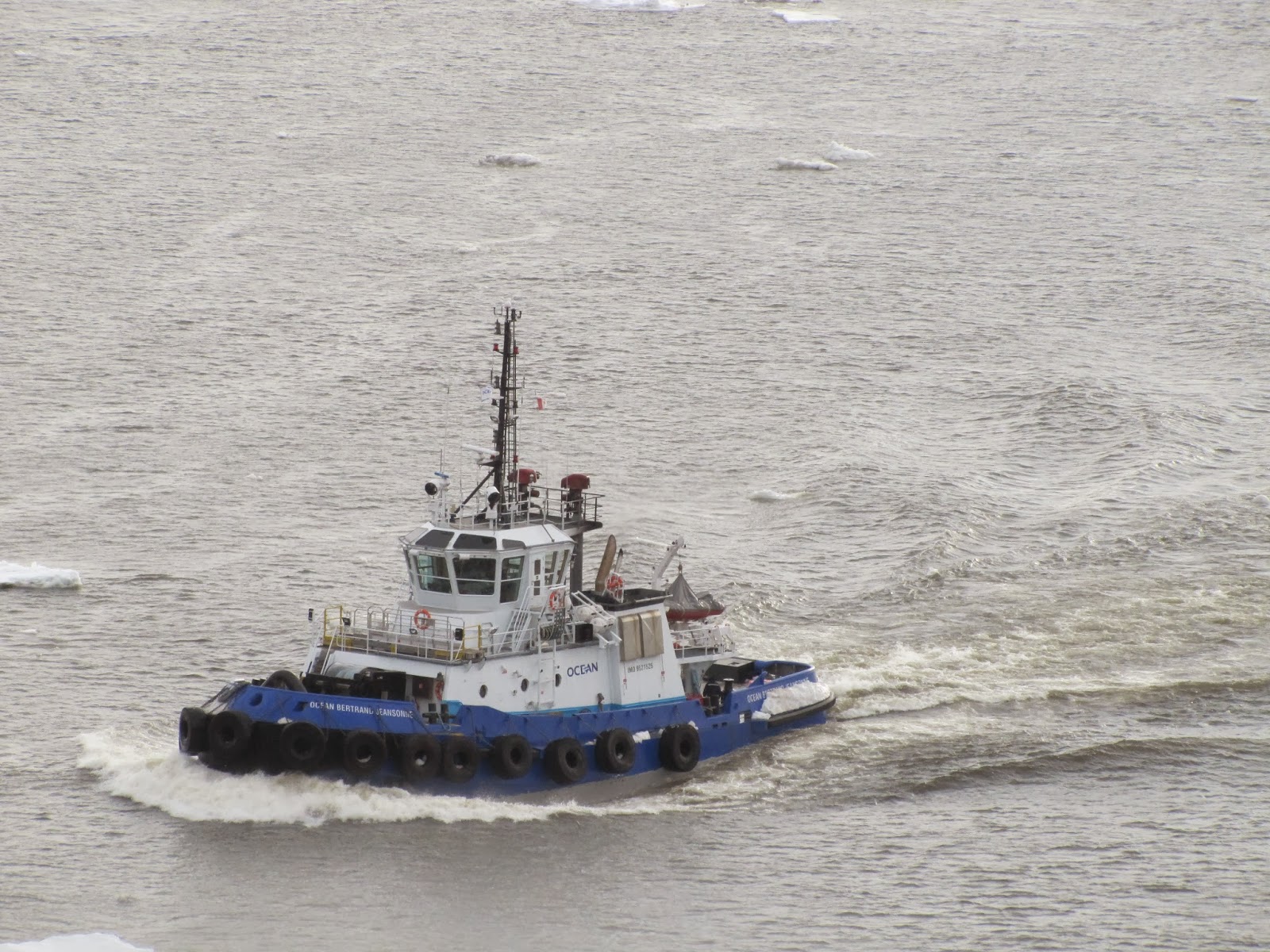 I passed a few people here and there, but when I turned back towards the hotel the tourist season was taking a winter nap.  In a few weeks as winter really sets in, festivals begin, the ice sculptures and ice hotel appear and shops reopen. 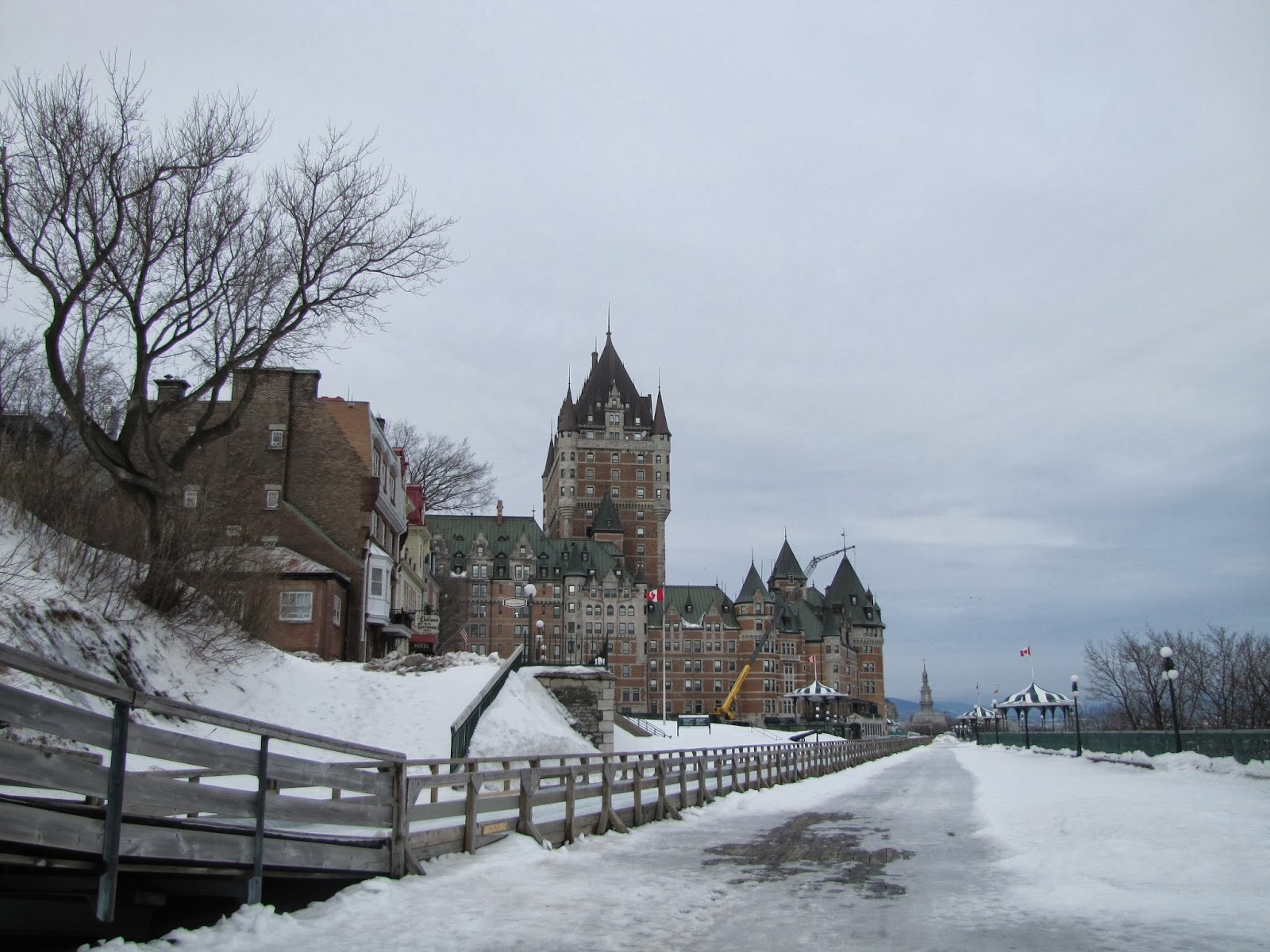 The hotel takes advantage of the quiet and works feverishly to repair exterior surfaces and redesign interior spaces.  I sat in the lobby awhile just enjoying the atmosphere.  Drills and hammers could be heard in various corners of the hotel. 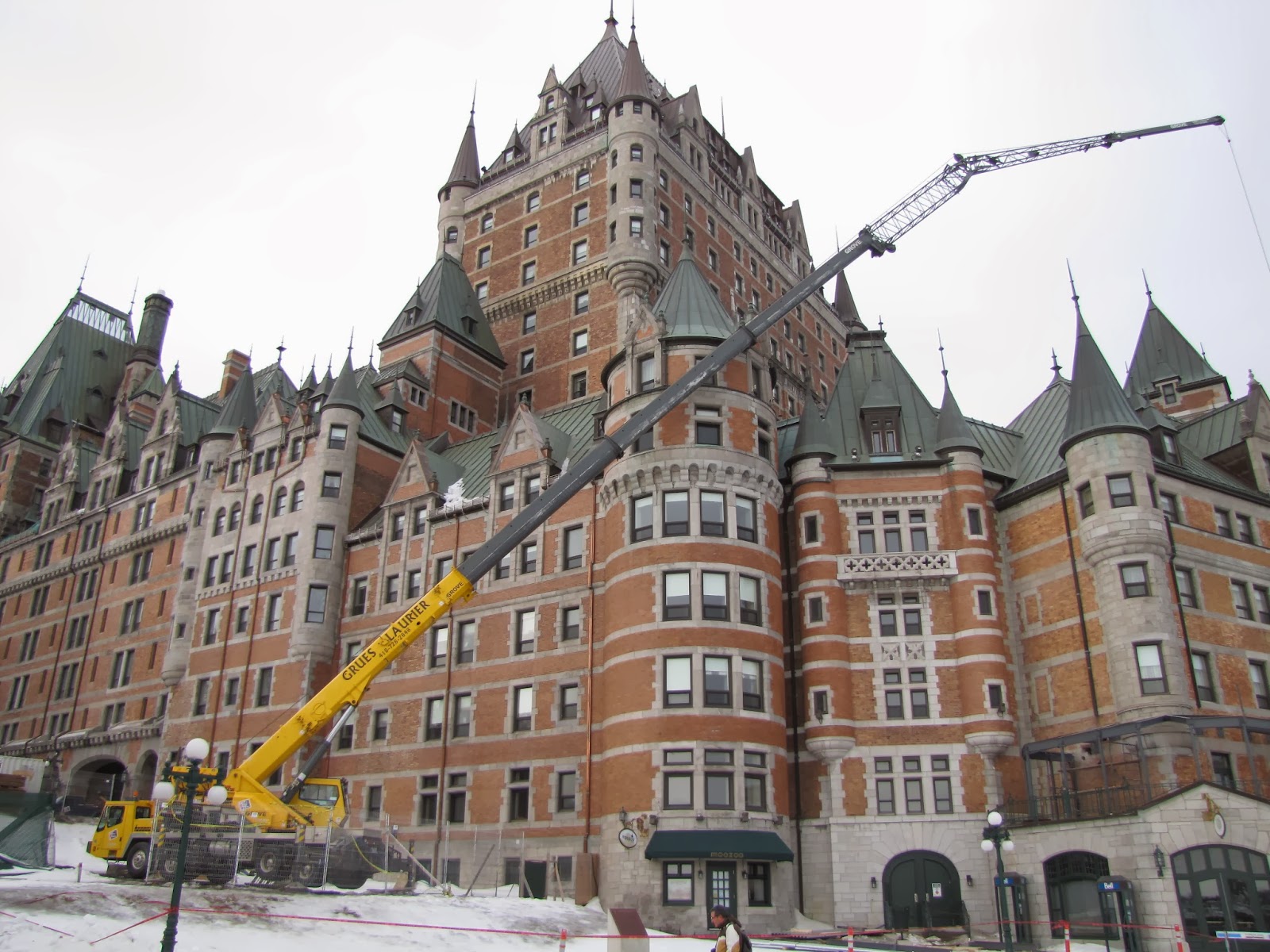 I carried two small guidebooks.  One of them noted a small restaurant that served traditional Quebec food.  I have rarely eaten-out in Montreal except to a sushi neighborhood restaurant and to China town, so this was actually a rare opportunity.  Besides the restaurant was in the oldest house in Canada (1600’s)  The low ceilings was crossed with beams, deep inset windows and a fireplace gave the dining room a snug feeling.  In the summer I think it would be unlikely one would gain a seat without a reservation.  Here in the quietest season the tables were full.  Time slowed while all of the guests bantered and supped in this cheerful and cozy room.  The hostess sat me by a window with a view across a narrow street and back across the room. 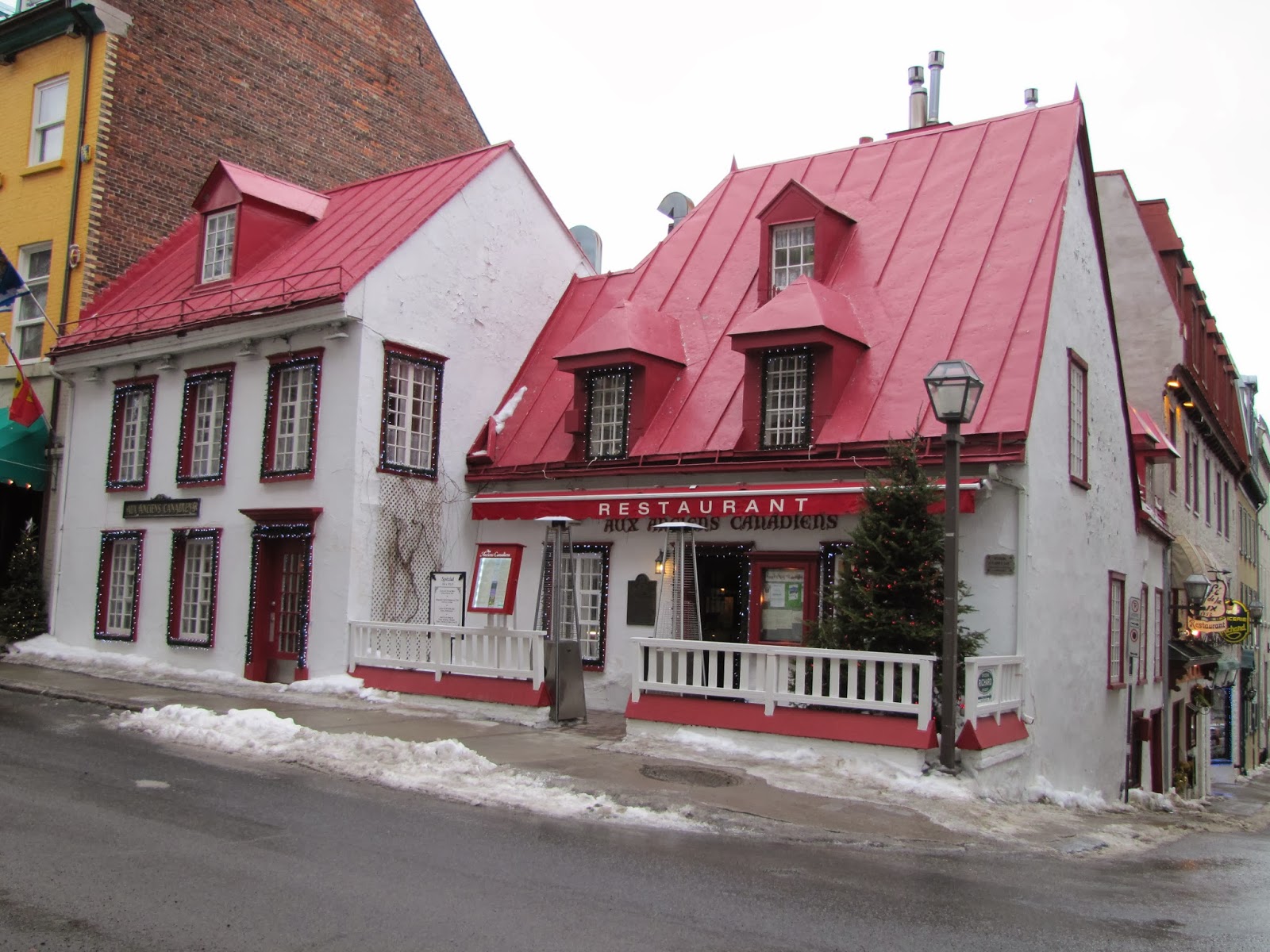 I ordered an appetizer of Quebec pie… duck with a confit of fruit on the side followed by maple syrup pie and coffee.  I didn’t know that this pie existed and of course could not pass it up.  If I had made it, I might have added a little more maple syrup.  If I had to choose a cul-de-sac, it would end here! 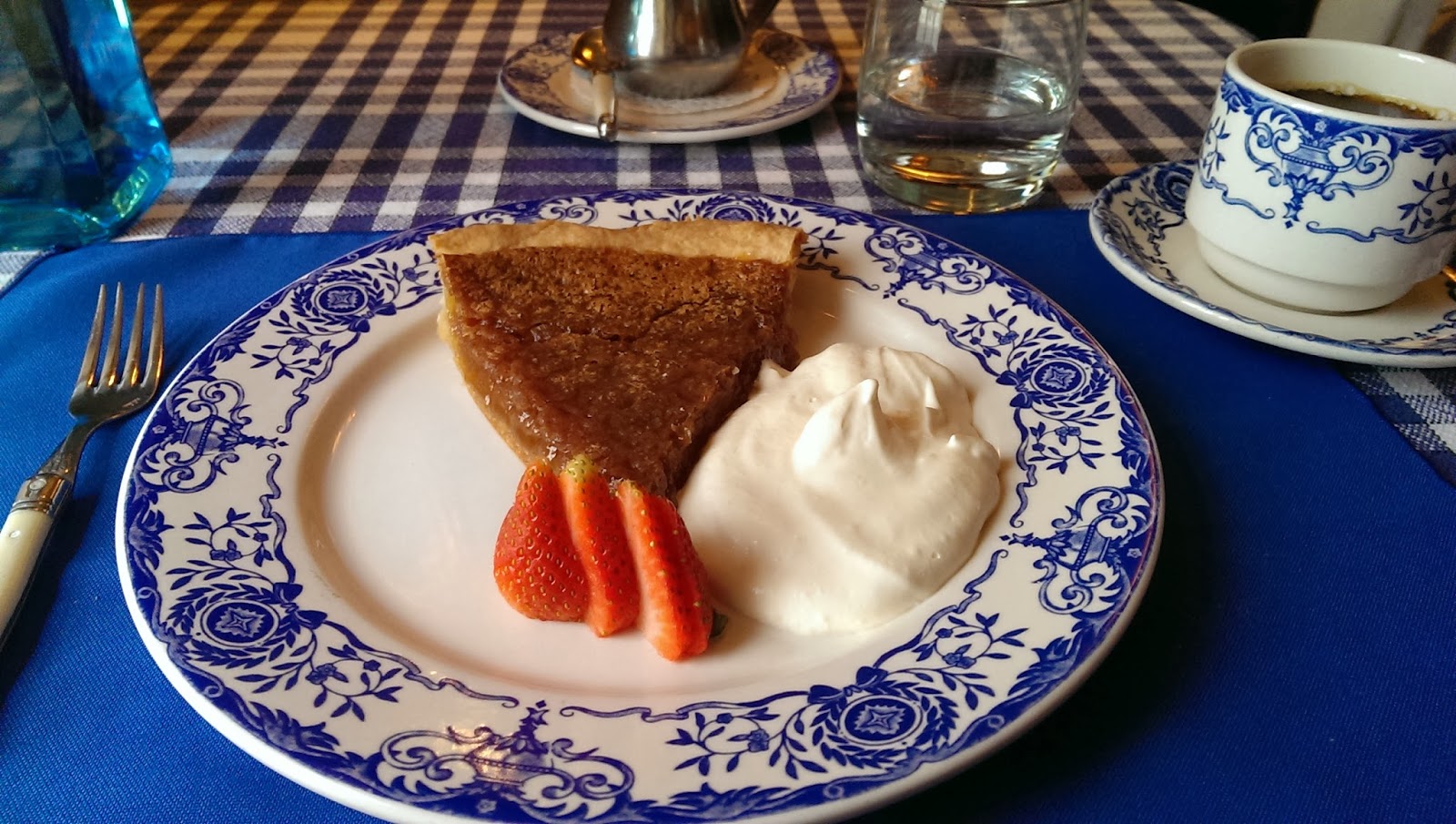 After lunch I took the stairs down and wandered the little lanes filled with shops.  I didn’t need to buy anything, so this was fine with me.  Glad actually that I came in the winter.  No jostling crowds.  Stepped into a few antique shops and enjoyed conversations with shopkeepers. 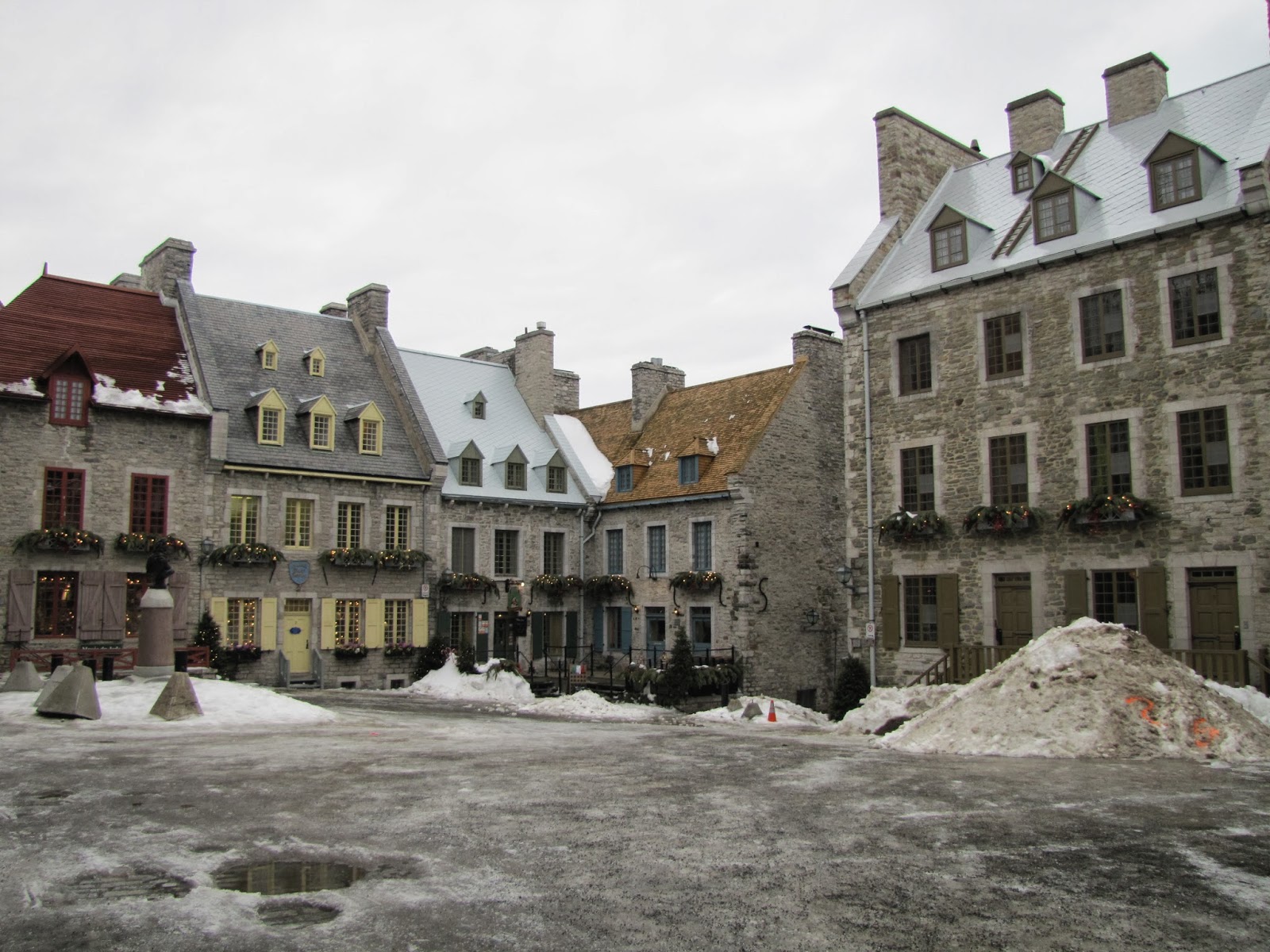 I returned to the bus station an hour before I had intended and came back on an earlier bus.  The wind was picking up and the clouds were moving in.  Time to head out of Quebec, the sweet little city ending the day. 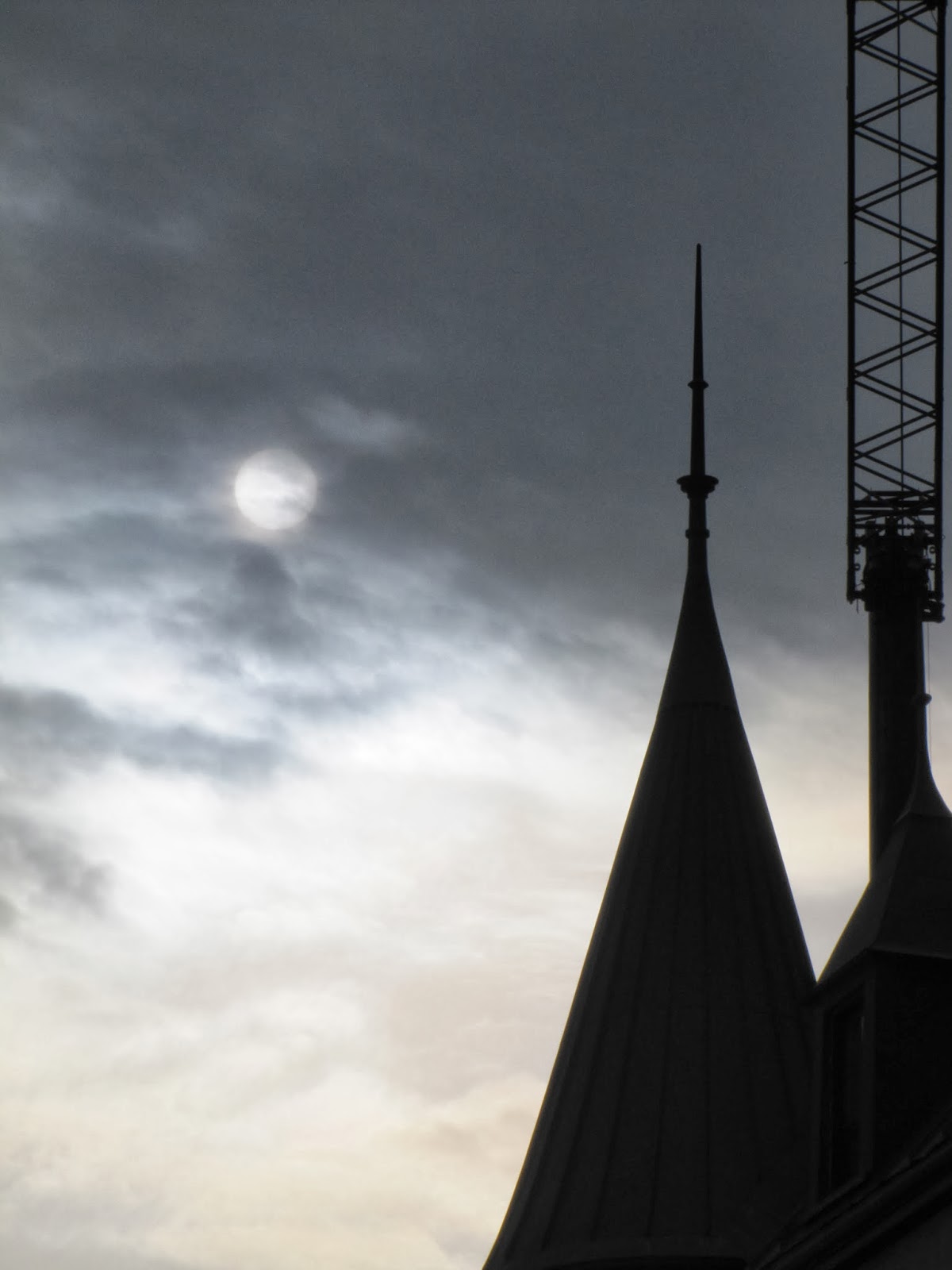 Posted by boxoftales at 9:17 AM