John F. Kennedy would say, “Arvard” and we all knew that he was referring to the venerable college, the rival of Yale.  Over my lifetime I have made a mental stack of the mentions of Harvard and built them into a myth.  Riding the T-line from Boston I knew that my stop would be Harvard Square and I prepared myself for my first view of this revered American institution.

Disconcertingly the Square is a triangle with the first view mostly of what seems to be the backside of a brick dorm.  There is an odd assortment of tacky buildings edging the remaining sides of the Square.  A newsstand hunkers down in the middle of the triangular island obscuring the entrance into Harvard.  Once one can see the entrance, it seems more fitting to a back entrance than a front and so it is. The original entrance was farther up the road.  Not to be deterred I made plans to cross the campus at a later date.

To be fair the “Square” began as a village center with a stream curving along side of it making it into more of a triangle.  The Square once had a stone marked with "eight miles" as the distance that it would take a coach to travel to Boston. When a bridge was finally constructed over the Charles River, the new mileage "two and a half miles" was carved on the back of the stone.  The stone remained until construction on the subway system relegated it to a rubbish heap.  Fortunately someone noticed it and rescued it.  The stone now stands nearby in God’s Acres, the old burying ground by the Common.

A short distance into the campus one begins to feel the elegance of the old buildings. 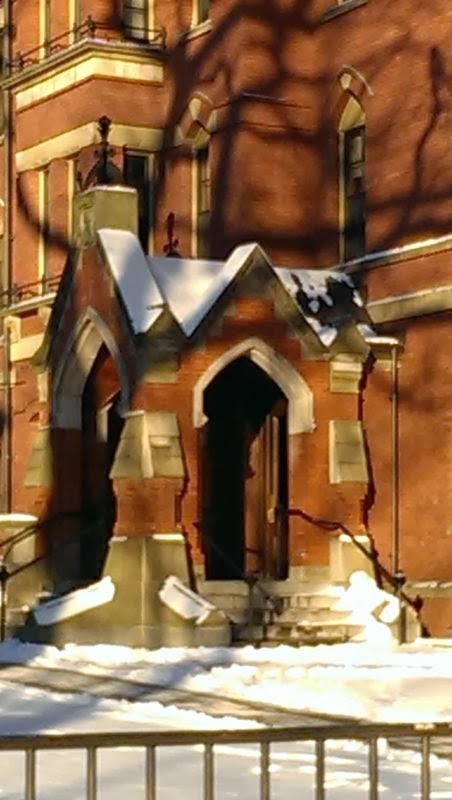 Harvard Yard, situated a hundred yards into the grounds, is lovely.  I crossed it late one evening with snow falling.  Not knowing precisely where I should be going, I followed the paths with the most footprints in the snow.

A lone yardman swept the high steps to one of the libraries as the snow fell, trying to keep it safe for late-night studies. The library is open only to students and professors (unlike some other university libraries).  Here is a view taken the next day from those well-swept library steps. 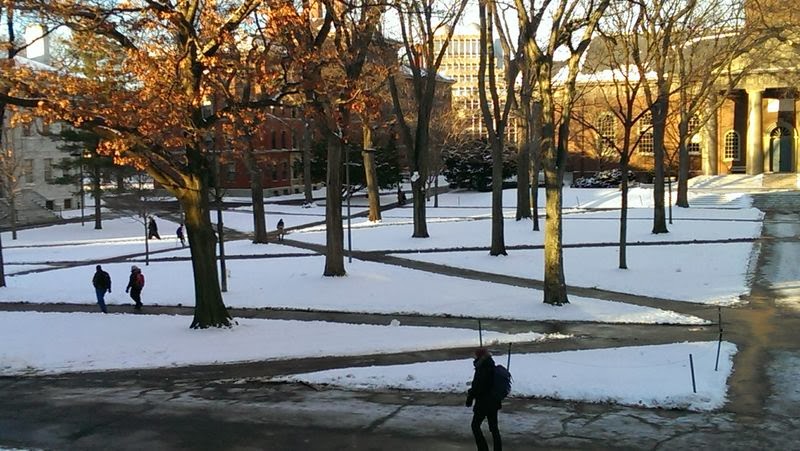 The campus of Harvard has now spread across 209 acres, some of which are located across the river on the Boston side.  Harvard is one of seven research colleges in the Boston area.  The total of seventy or so colleges in the greater Boston area is impressive. As I ride around on the transit system, there are college students on every route.  Today I spoke to a student from Turkey.

Puritans founded Harvard in 1636.  (It is unlikely they would have appreciated the co-ed dorms now standard.)  The success of the school in promoting excellence is astonishing.  Harvard has produced 47 Nobel Laureates, 32 heads of state and 48 Pulitzer Prize winners.

Betty, who I stayed with in Cambridge, a friend of hers and I walked Mt Auburn Cemetery, the oldest landscaped cemetery in the United States. Harvard presidents and many of its illustrious students are buried here.  The chilly sunlit snowy grounds were perfect for a quiet walk.  The day was glorious.  We enjoyed each other’s company stopping here and there to point out a particularly poignant headstone or tree.

Cambridge had been a most enjoyable place to visit.  I loved the feeling of tradition.  Betty was an exceptional host.  She had many varied activities planned.  She took me to a Thursday Morning Talk.  These benefit a Mt. Auburn hospital.  The Talks have been a regular event for about 113 years!  Beef broth is served in teacups from silver urns prior to the talk.  The talk on the day I attended was about the role that philanthropy takes in Boston's wellbeing.  Improving the education levels of young African Americans is their current most pressing task. 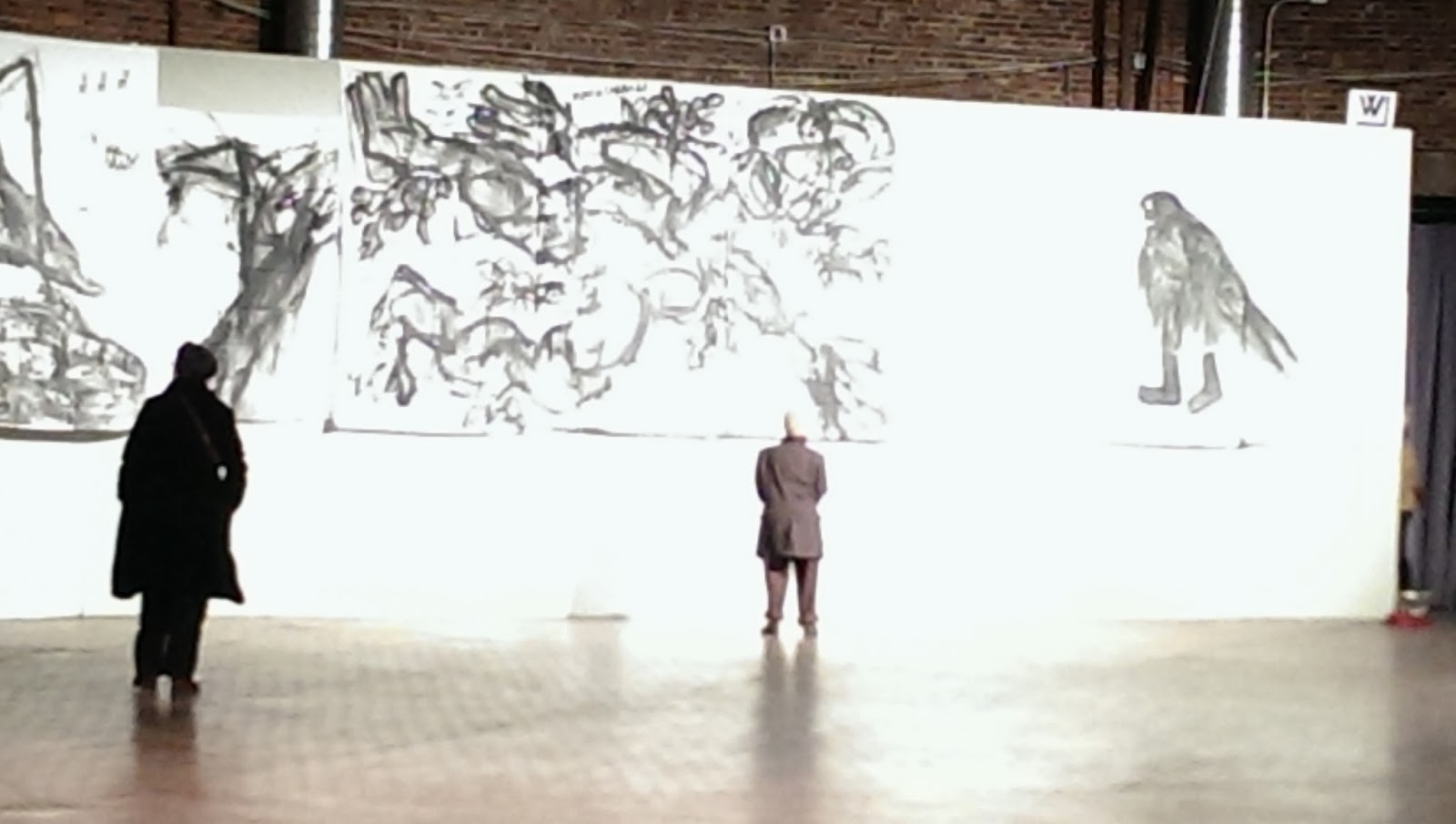 The intellectual and creative atmosphere of the Boston area is impressive.  I’ll finish this entry with a nod to the Bread and Butter Puppet Theatre.  I don’t know if anyone involved in the most recent show had a Harvard connection, but the show was at least Harvard worthy.  The depressing theme of oppression was conveyed by the large-scale background drapes of black and white drawings, the huge grim puppets (sometimes reaching fifteen feet in height) and the archaic machines. 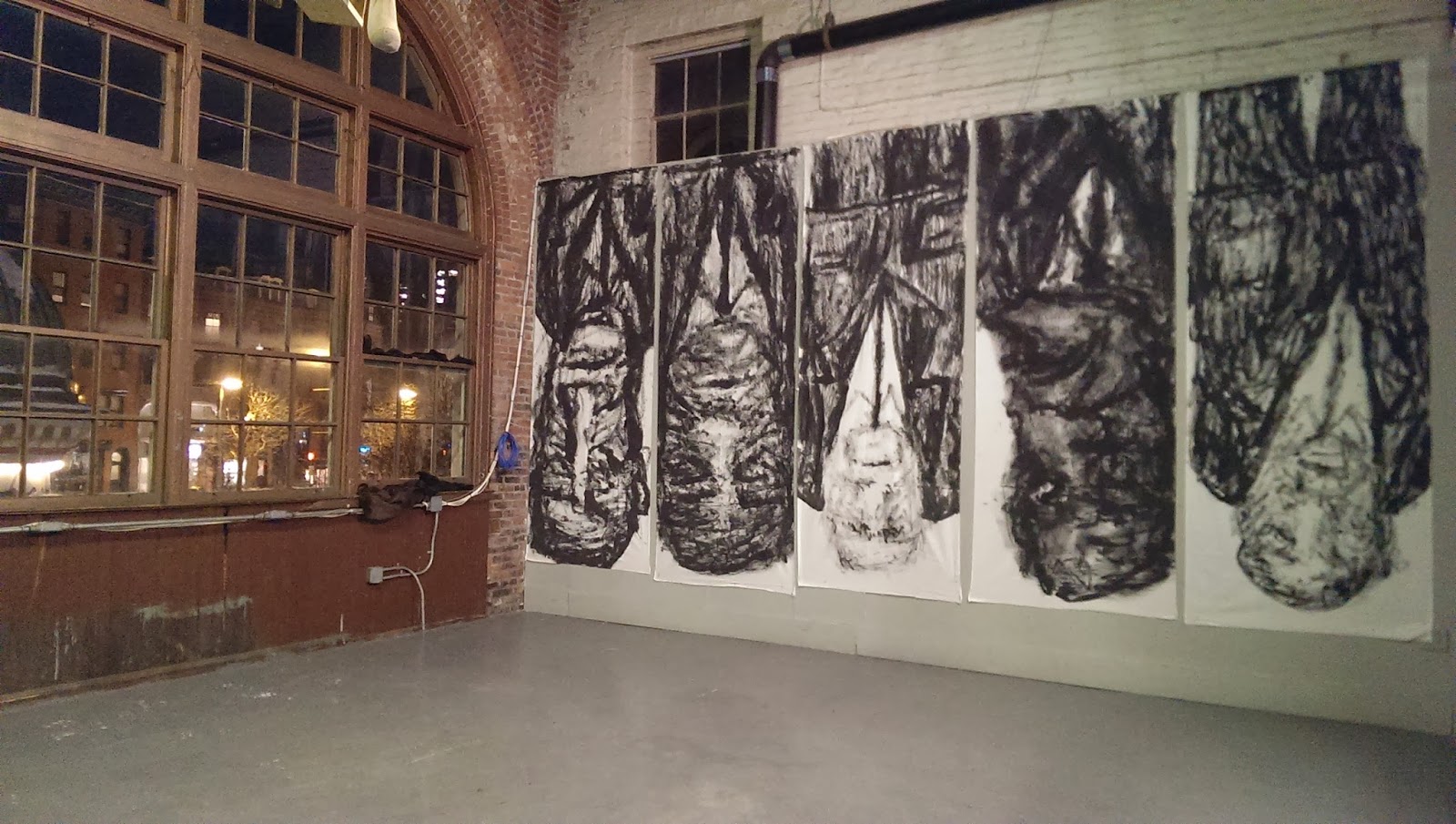 The audience walked about during the entire performance following the puppets, musicians or the people as they acted out the play with puppets appearing from behind the drapes, or dropping from the ceiling.   I am sorry that I didn’t get any photos during the play, but maybe these photos will convey its strange sadness.  The large room was dark during the play with various kinds of spotlights directing your attention. 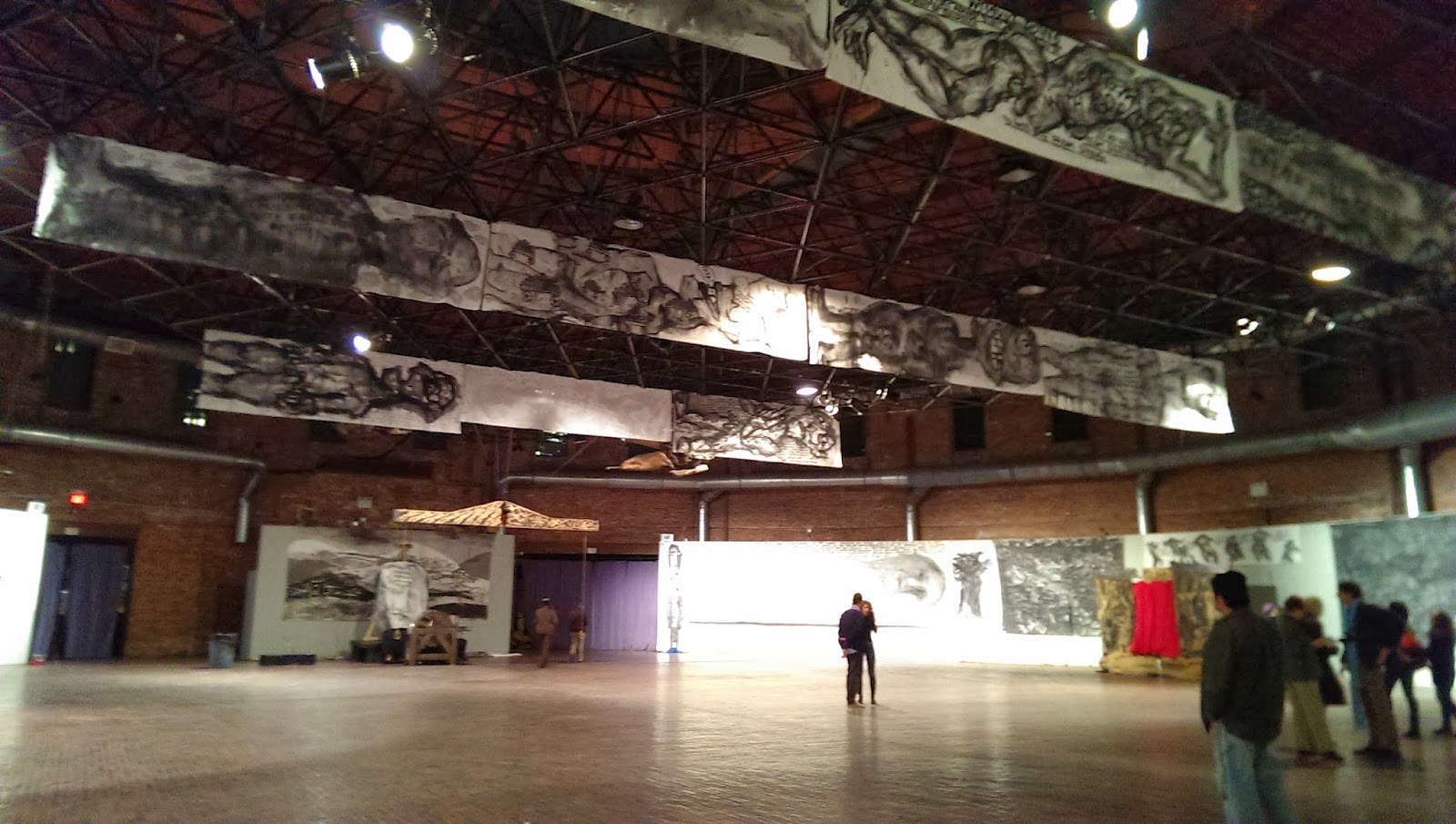 At the end of one week, Betty helped me move to Winthrop-by-the-Sea.  (I think we both shall miss our late night talks.)  For the next two weeks I am living about a block from the water in a community north of Boston.

Posted by boxoftales at 7:40 PM