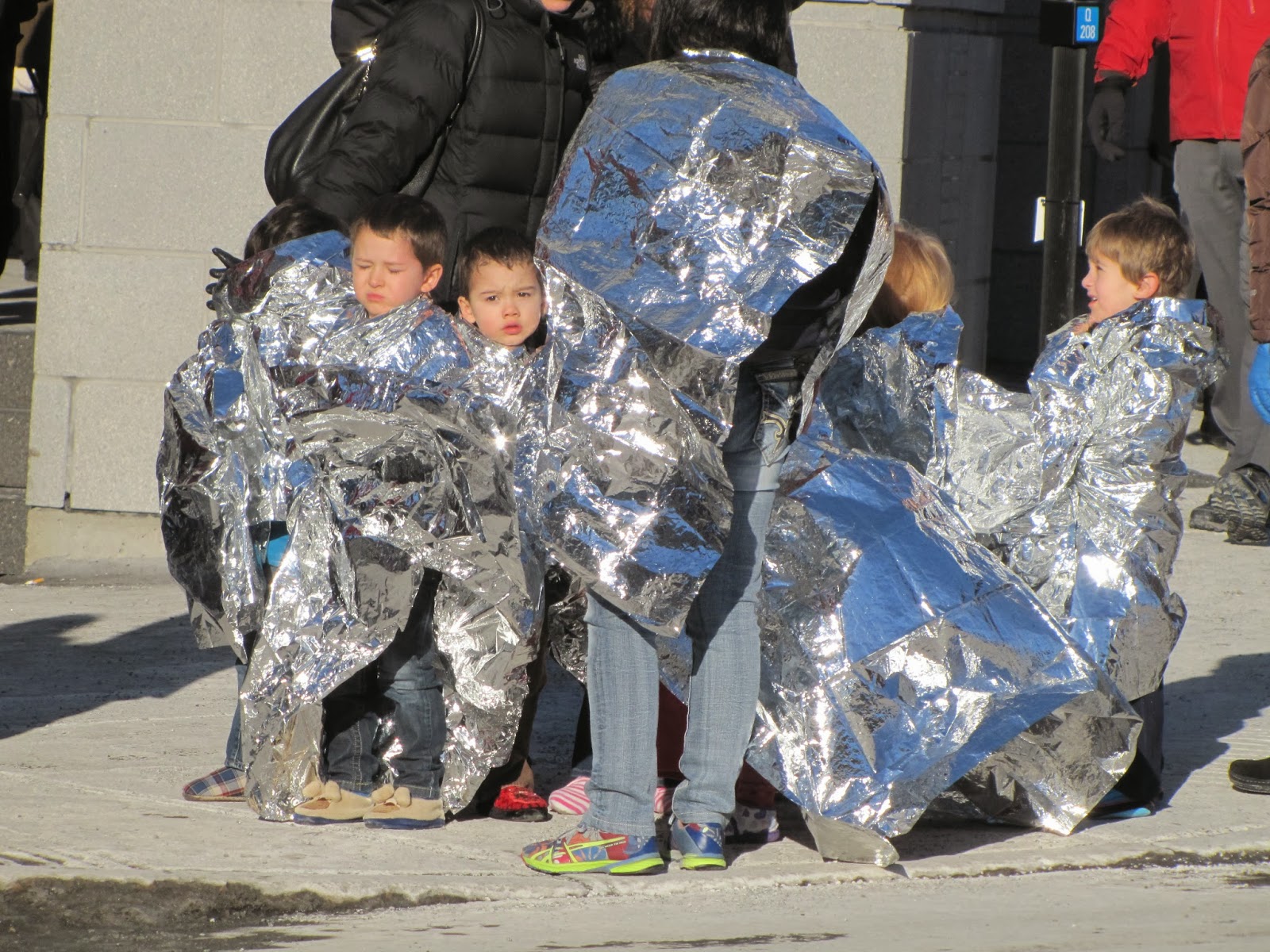 These children appeared to be on their way to give a performance of some sort about silver-winged angels in a post Christmas-inspired play.  Or maybe their play was about silver-backed beetles.  Or maybe one of them had just pulled the fire alarm and they were on a fire drill wearing space blankets to keep warm. The day looks sunny, but it was 12 degrees with a brisk breeze blowing up the hill off the Saint Laurence River.  As three fire trucks roared up the hill and blocked the intersection more children poured from basement stairs of the high rise all of them wrapped in their little soft fabric nappy blankets.  Office workers poured from the lobby doors.  Later looking at the photo I noticed the children's slippers and hatless heads. 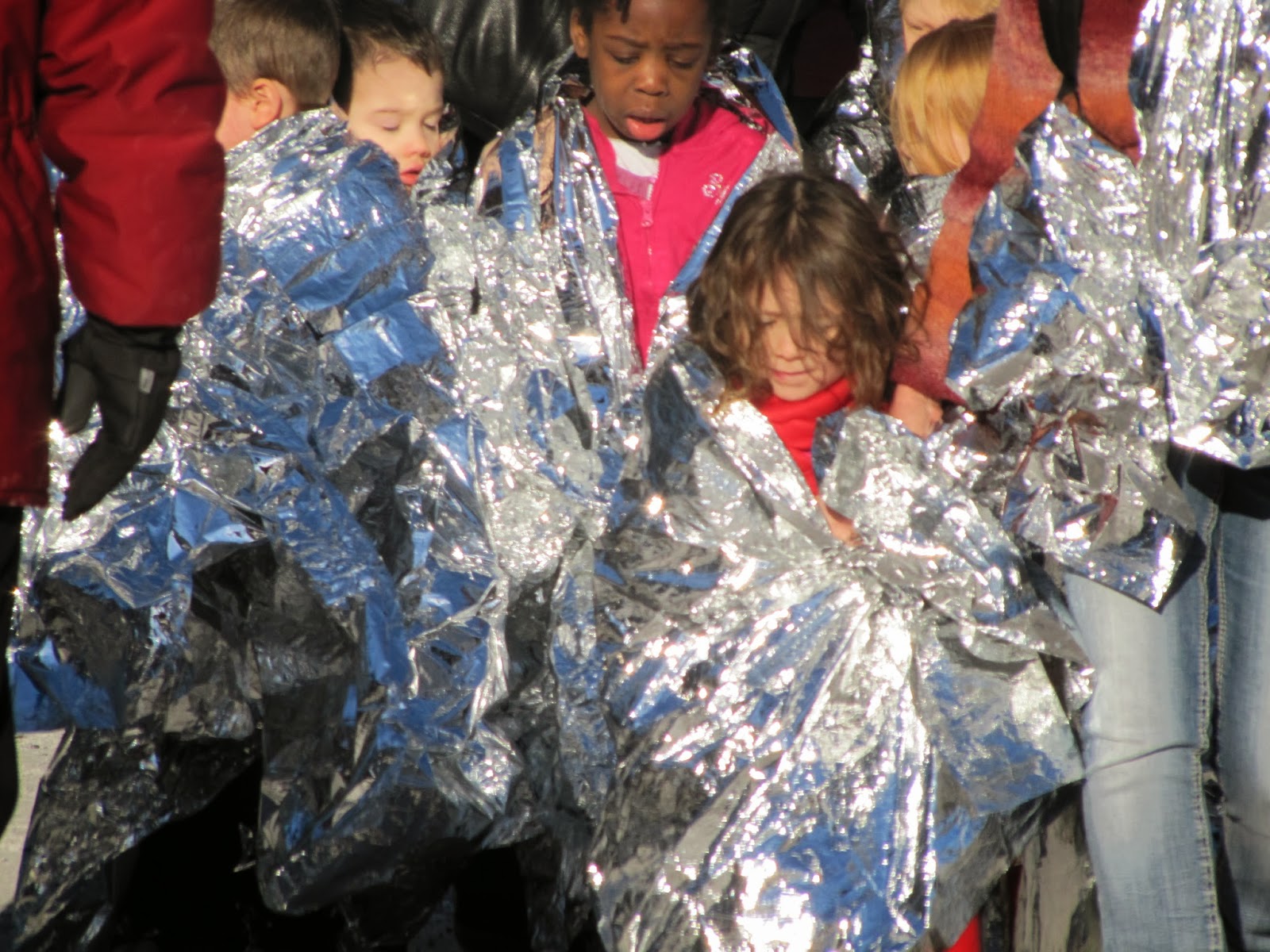 I've been through so many fire drills with preschoolers, but this drill takes the difficulties to new heights!  The wind whipped their little blankets about and the blankets appeared to be a tripping hazard.


Around the edges of our documented lives are the ordinary events like the one above.  As I write this blog, I am aware that I am leaving out some of the ordinary events that are actually making this trip so very much richer.  So today I thought I would write about a few ordinary, but wonderful things.

*Feeding birds.  Since the very coldest day, I have begun my morning by stirring peanut  butter into bread crumbs, sliding open the back door and stepping into the frigid air to toss the crumbs out to the little band of eight sparrows who live in the neighborhood.  As I step out I make the phishing noise that will call birds.  This morning I didn't even have the second phish out of my mouth before the first sparrow landed.  The little birds delight Lilly the house cat who watches through the glass door and makes her own little come-hither noises.  I have seen very few birds, although I did spot this Canadian starling with a most unusual beak checking the garbage cans at the Jean Talon market. 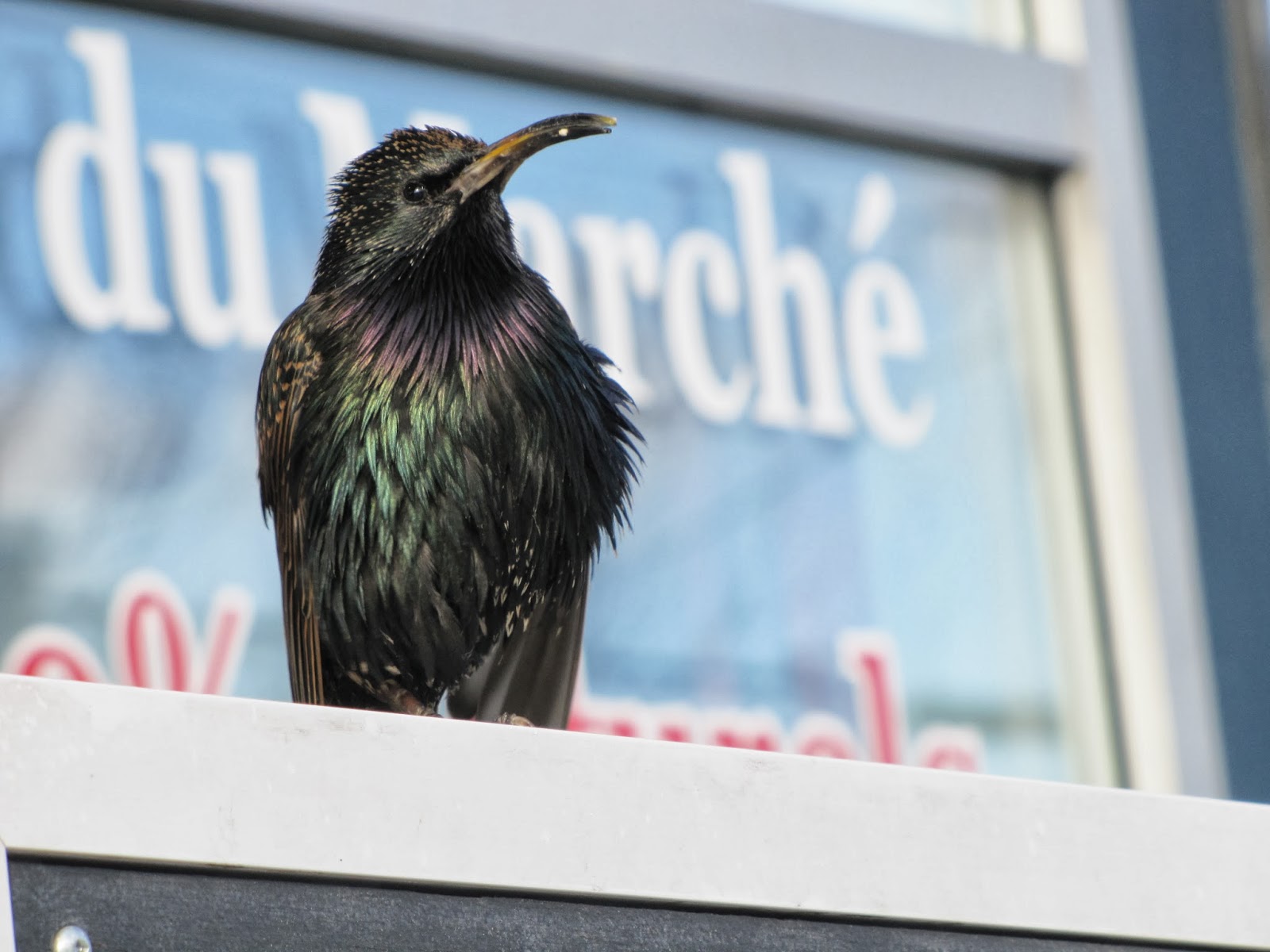 *Washing dishes.  There is no dishwasher, so everything is washed by hand.  As I often have meals here at home and share dinners with the family, I take my turn doing dishes every day.  Kara has a beautiful set of pink dishes purchased at a flea market in Manhattan and her grandmother's every day dishes graced with a flower design.  Washing dishes is a small pleasure. 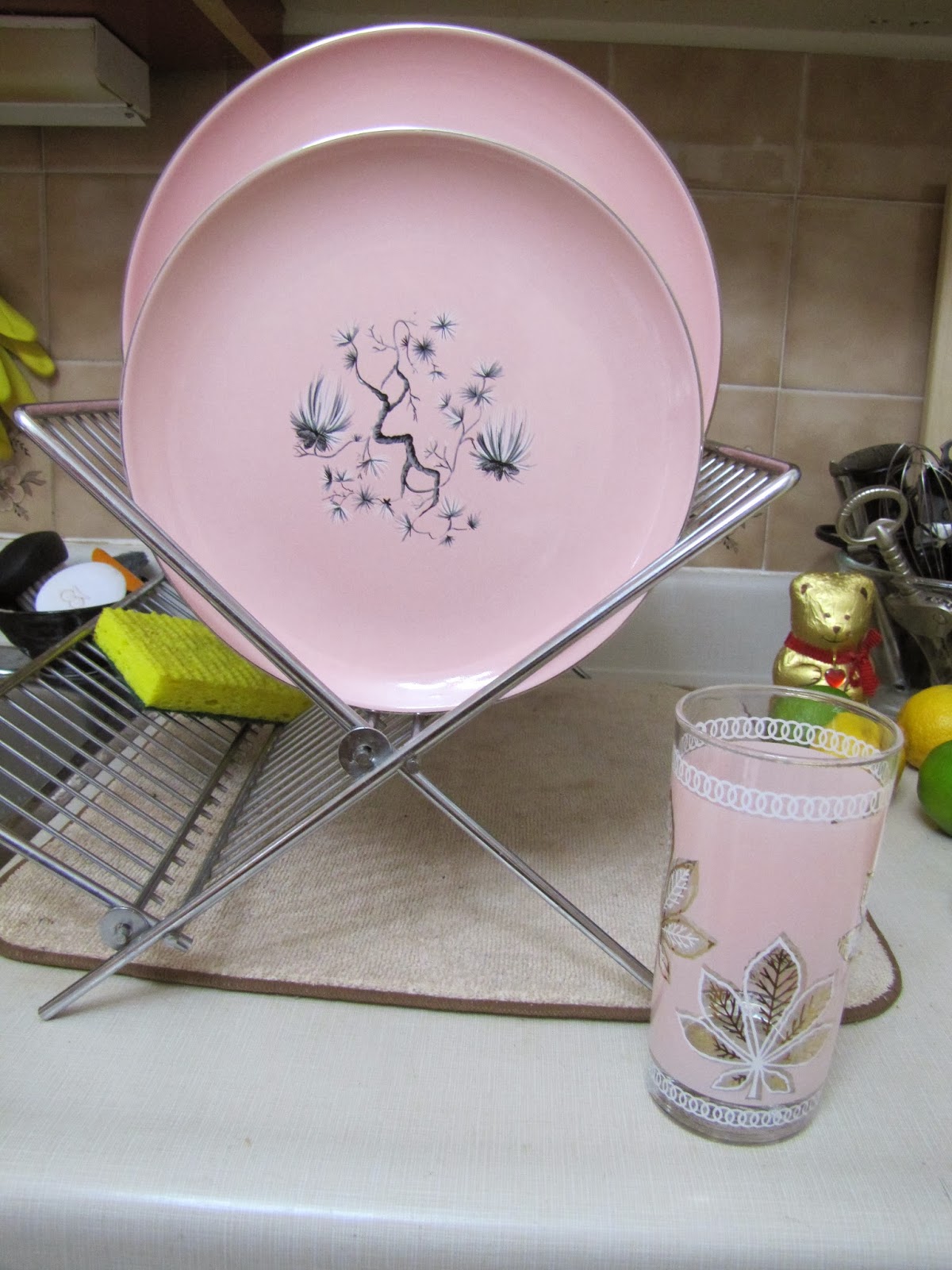 *Yoga.  Kara is a lyengar yoga instructor.  She conducts yoga classes in a studio in her home. I have been fortunate to get a space in a couple of her beginning classes.  Iyengar yoga teaches how to hold positions precisely.  I have learned so much in a short time as Kara is an exceptional teacher.  My occasional hip pain has all but vanished. 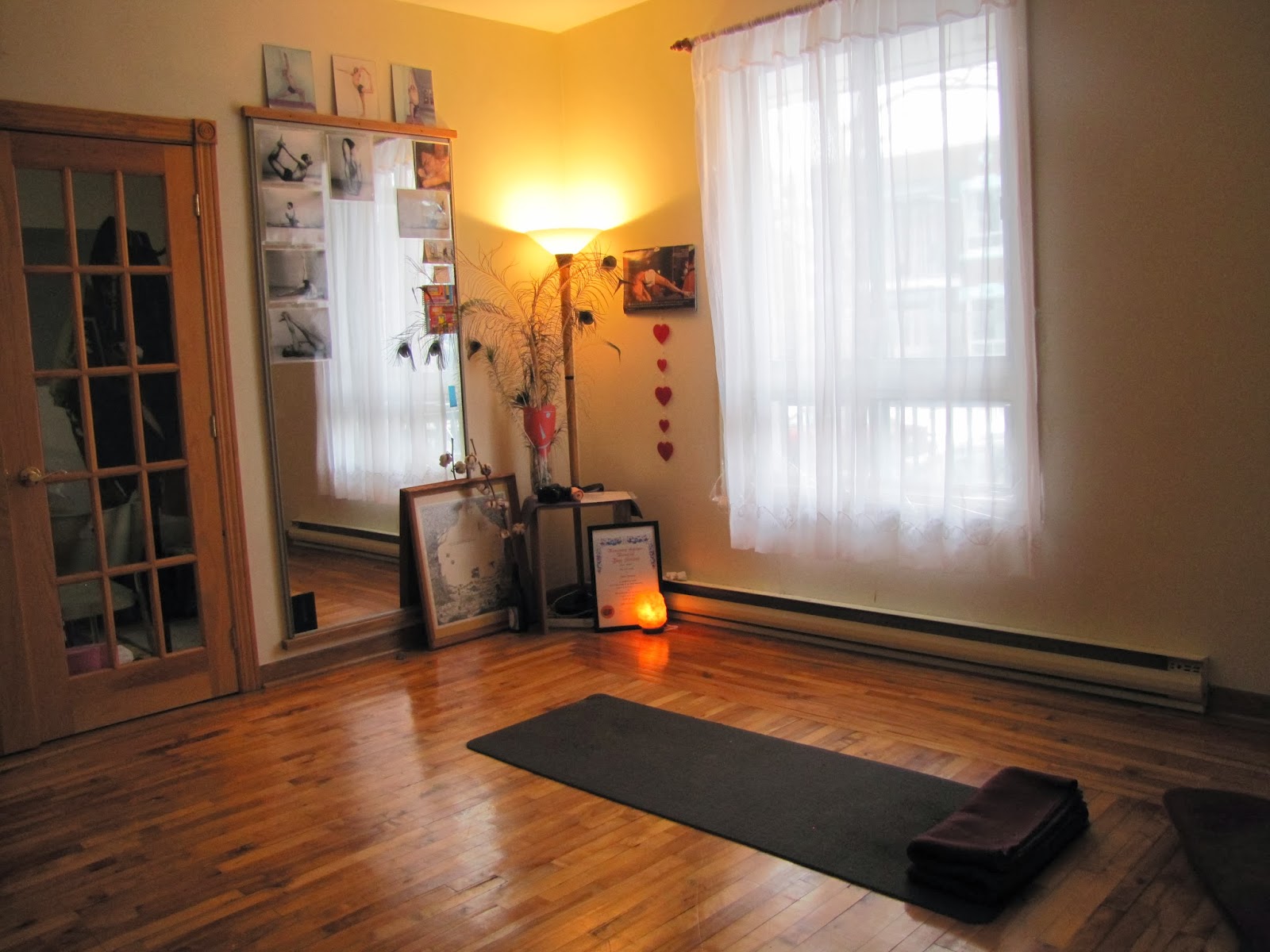 I haven't mastered the pose to the right yet! 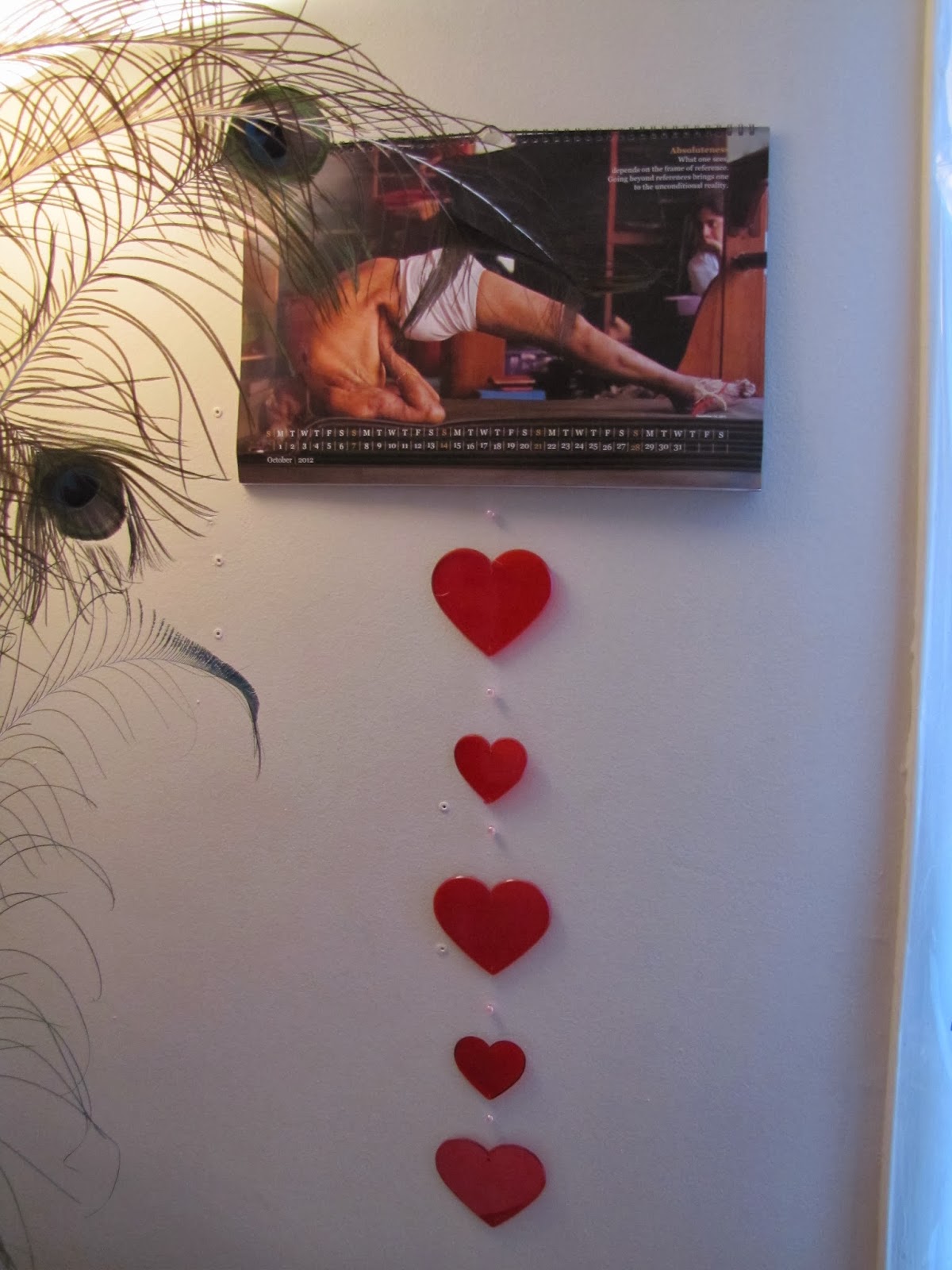 The coming and going of yoga students fills the home with banter.  I have gotten to know a couple of the students and have joined Kara and them for dinner at an Indian restaurant and a movie.

*Kara and Omaha.  I so rarely post photos of people, but this morning I asked Kara if I could include a photo of her and her daughter.  They are so much a part of this journey.  You will know immediately how delightful they are from their faces.  Omaha comes home for lunch every day and we occasionally watch "Glee" with her in the evenings.  Last night we had dinner together in Chinatown and went to see the movie "Saving Mr. Banks".  Kara and I have had many great conversations.  Omaha just lights-up the house with her cheerful demeanor. 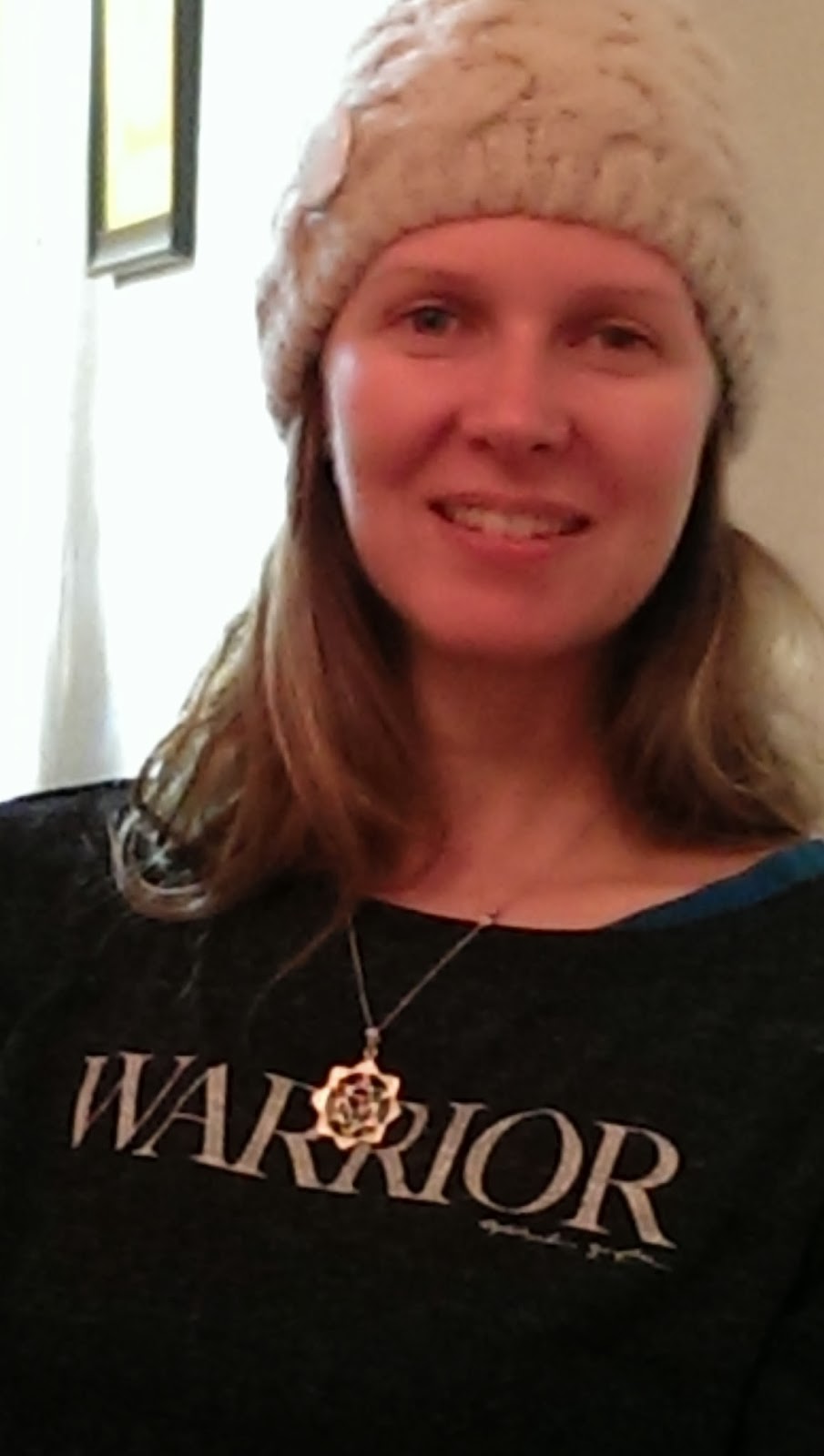 Kara grew up in upper New York State, but has lived in Montreal for a number of years.  She is fluent in French and English.  She has a great community of friends.  She is marvelous cook.  I feel very fortunate to be traveling and feel like I have "family". 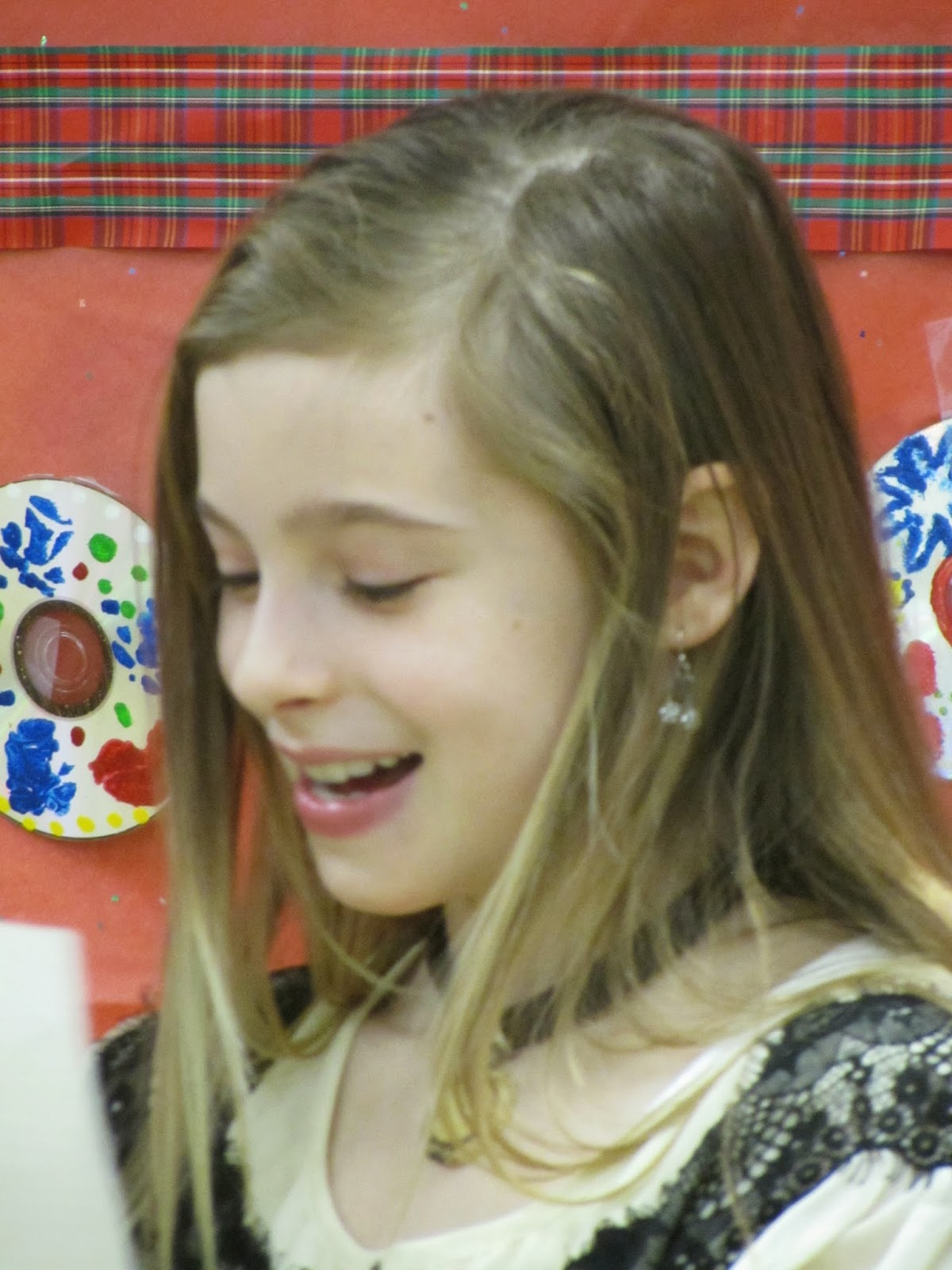 Omaha is singing at her holiday class celebration. She wrote the words and composed the song in French.  Her public school teaches in French, but her English is perfect.  She is an engaging and delightful kid.  Yesterday on the Metro she was singing in her high clear voice.
*The library.  I have spent a number of days at BAnQ, the National Library of Archives.  A couple of days ago I was there for five hours.  The older African American gentleman, who spends his time marking maps at the reference table, nods to me when I arrive.  I have seen him a few times and we now know each other.
Sometimes I sit by the high windows on comfortable couches or on one of the levels of desks with computer outlets.  These desks all have a view outside.  The archive area asks you to store all of your belongings in a locker and take your license in exchange for a locker key.  I have been trying to trace some of Gary's relatives and also the family of a friend.  I've been reading historical records trying to put the family's immigration into some context.  Gary's family is particularly difficult to locate so far.


*Baha'i connections.  When visiting the Montreal Bahai Center I met Samantha (Sam), a girl working in Montreal, originally from Newfoundland.  She invited me to her favorite coffee shop where she encouraged me to try their almond croissant.  Dense, heavy and flaky.  The best that I have ever had.
We had a great time talking and plan to meet again maybe for dinner and then for a fireside at the Center.  She is just curious about the Faith.  Fireside doesn't mean there will be a fire, although there might be.

May Maxwell was the first Baha'i of Canada. Her home was designed by her architect husband, and is a Baha'i Shrine in Montreal.  The living room with it's elegant fireplace was where Abdu'l Baha, the son of the prophet, gave talks about the Faith to crowds during a tour of America and Canada in 1912 .  The house has been left precisely as it was when he visited.  I have taken two trips there, but the first I missed the location from the bus and instead had a nice bus ride circling the city.  The name "fireside" is believed to have come to mean a teaching event starting with the events at the Maxwell home.  Baha'is won't teach about the faith, unless someone asks them for information.

*Women Welcome Women.  I have mentioned this group early on in the blog.  One of the women in Montreal lives only a few blocks away.  One recent evening I walked to her home and we had a laughter-filled few hours.  She served a dense dark cake traditionally from British Guinea.  Diane has traveled all her life.  Her father was a harbor captain.  At 72 she is still an active traveler.  Her next trip will be to Sri Lanka.  We will meet Sunday to walk in the other Victorian cemetery on Mont Royal.

Maybe there is more "extraordinary" in the ordinary after all!