The Waitress at Long Branch Cafe 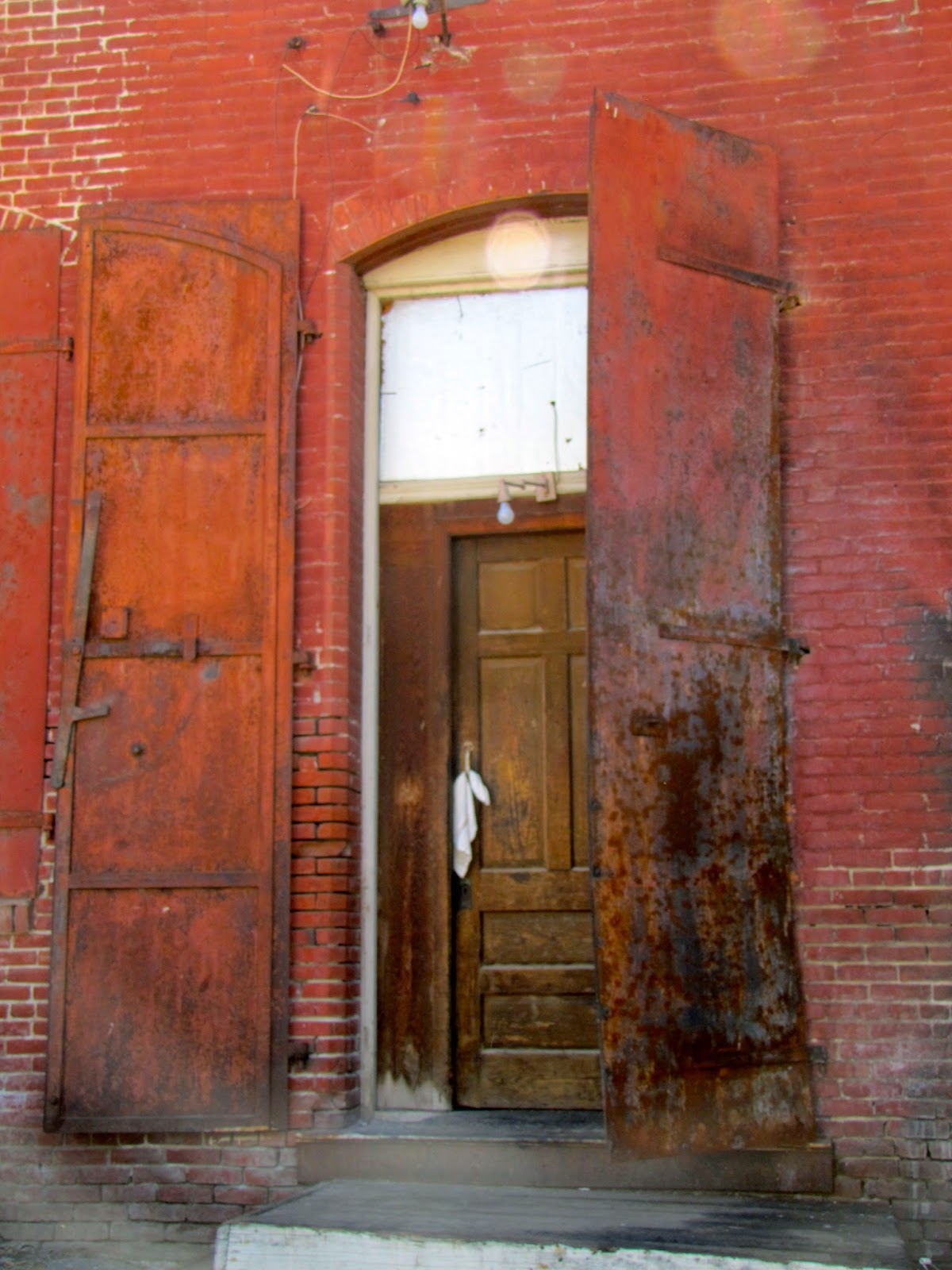 Small towns conjure up a sense of place, a sense of mystery. Their deteriorating buildings, painted with a patina of transformations, evoke the changing chemistry of people and metals over years, over decades, and over centuries.  The ordinary becomes the focus of the extraordinary, a story following the last story with the details known by everyone.

She was a waitress, who knew her customers. She addressed an old gentleman calling him "Honey", when she gave him his change.  She knew the movements that needed to be made, both hers and the busboy's.  "Give 'em water.  Set their places."  Move, implied her slightly exasperated voice.  She was the only waitress on duty and she knew her business.  She was also a smoker.  I could smell it on her black jeans and matching shirt.  I surmised that she was the "she" who left her dishrag on the back door, when she had gone out for a smoke.  In a small town these details are the story.  Her beautiful dark skin and hair matching those of the younger female cook.  They spoke casually, each confident that they could count on the other, that they could even chit chat and still get their jobs done.  Familiar like.

I don't come here often, so I was happy to find a binder of historical town information on the side cabinet.   Actually there were four or five binders.  I just chose one of them and took it to the counter, where Todd and I sat facing the kitchen and the standing army of condiments.  The cafe was once a hardware store facing a dirt street with a fountain in the middle of the road. The building survived the town's fires, lost its usefulness for awhile and then opened as a local and eventually legendary cafe with its wall of knick knacks and a menu to please any soul. 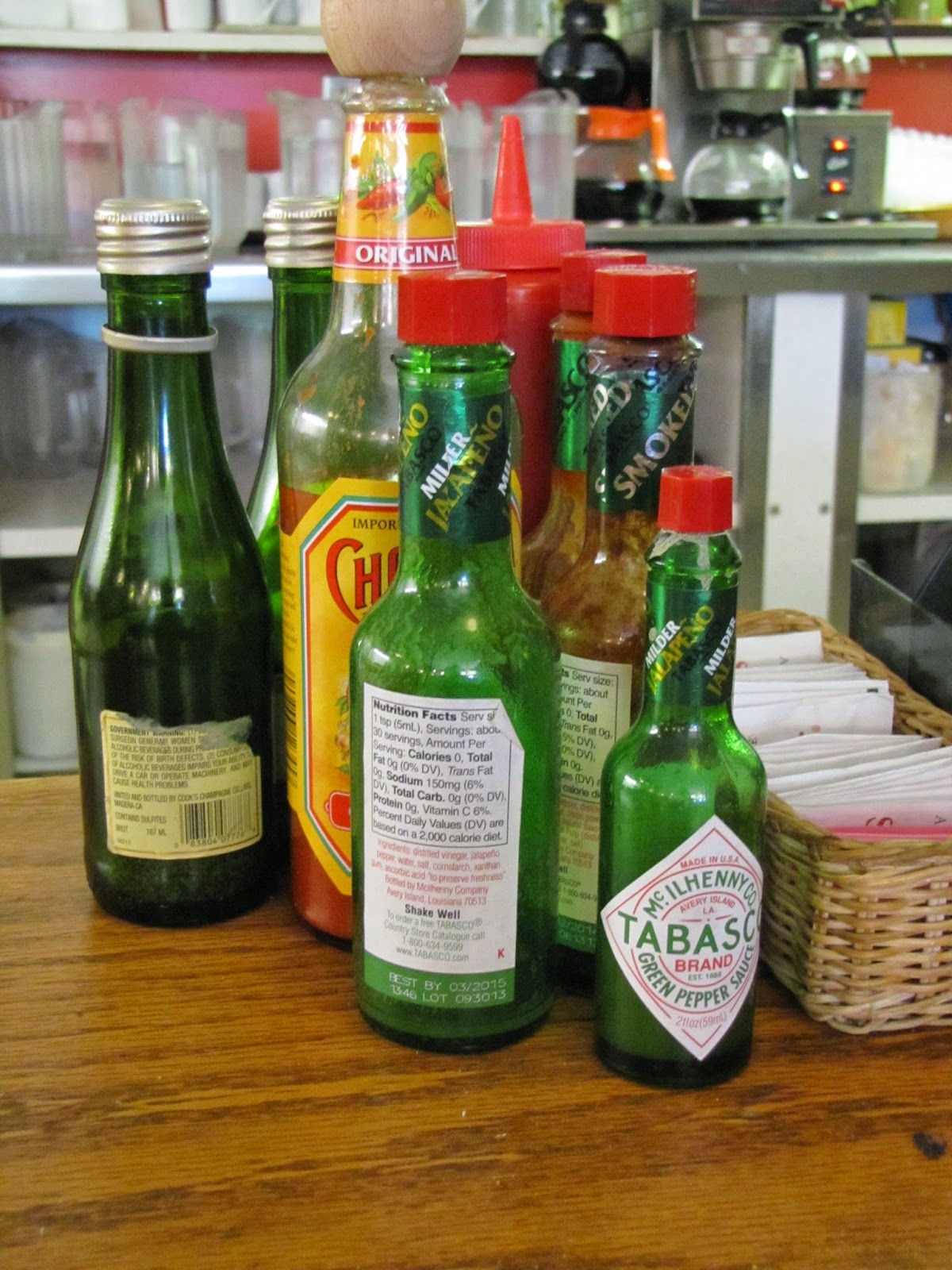 Steak (6 ounces) and two eggs (any way you want them) with a side of potatoes (hashed or cubed) plus toast (four kinds to choose from) was only $5.99.   A homemade biscuit came with gravy (sausage, chicken or bacon for an extra buck), and was also only $5.99.  The waitress informed us that the latter is the best selling item on the menu,  averaging over 250 orders per week.  We ordered it.

The pages of the paper menu were stapled in one corner.  Most items had two prices (whole order or half).  If you lived in this town, you could eat here every day for weeks and weeks and not have the same meal twice, but be recognized every time.  The congeniality of the waitress make me wish that I lived in this little town. 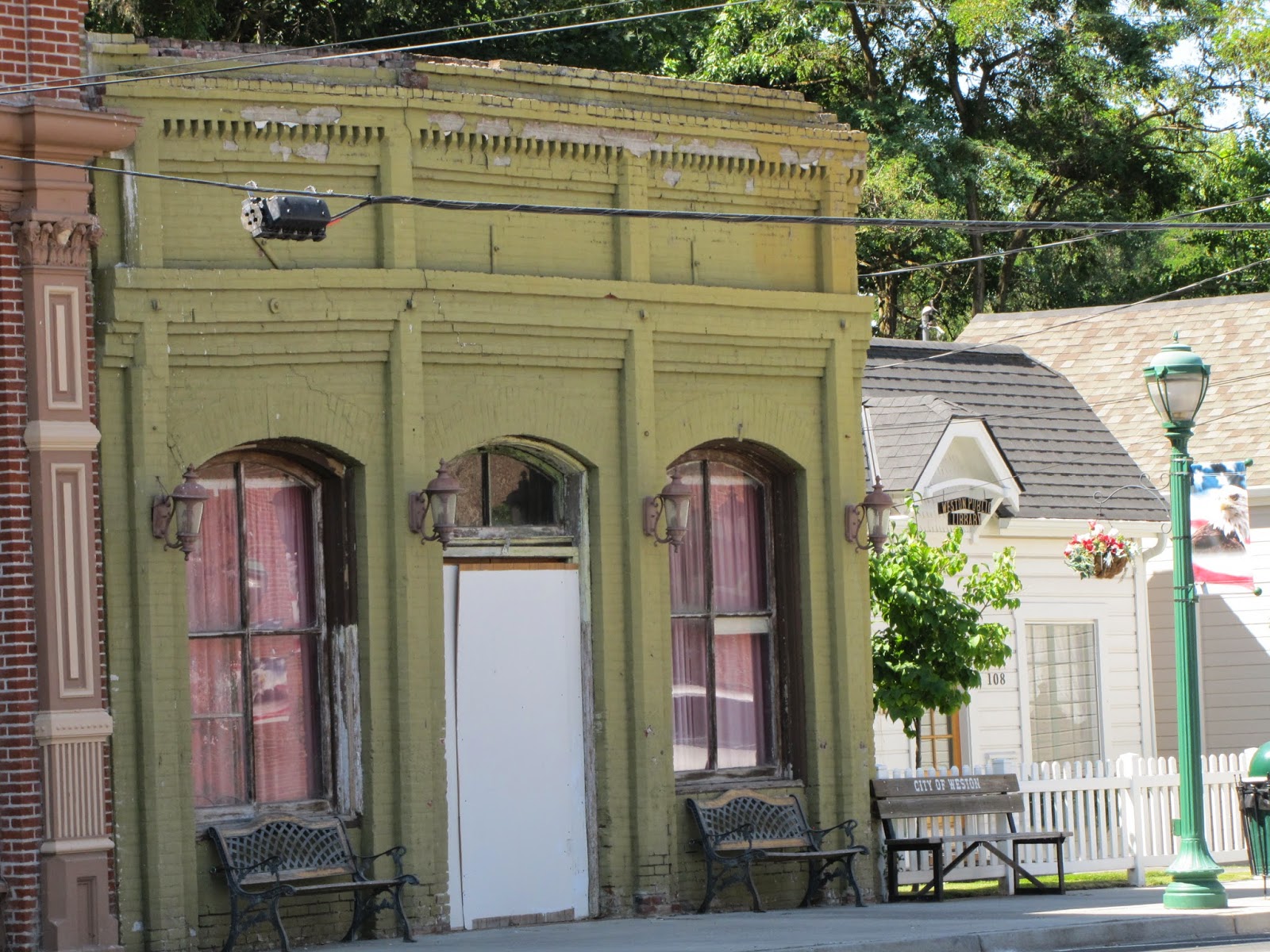 As in many out-of-the-way towns, there are buildings waiting for business tenants.  Weston, Oregon, has its share. I loved the little green building with its raised eyebrow windows.  It is sitting next to the local picket-fenced library.  The empty buildings up and down the street add to the illusion that the town is open for possibilities.  It would welcome you and your services if you moved to town.  Move here.  Besides there is that cafe just down the street, the one that would happily put your picture on their wall along with all the others and serve you steak for a mere $5.99. 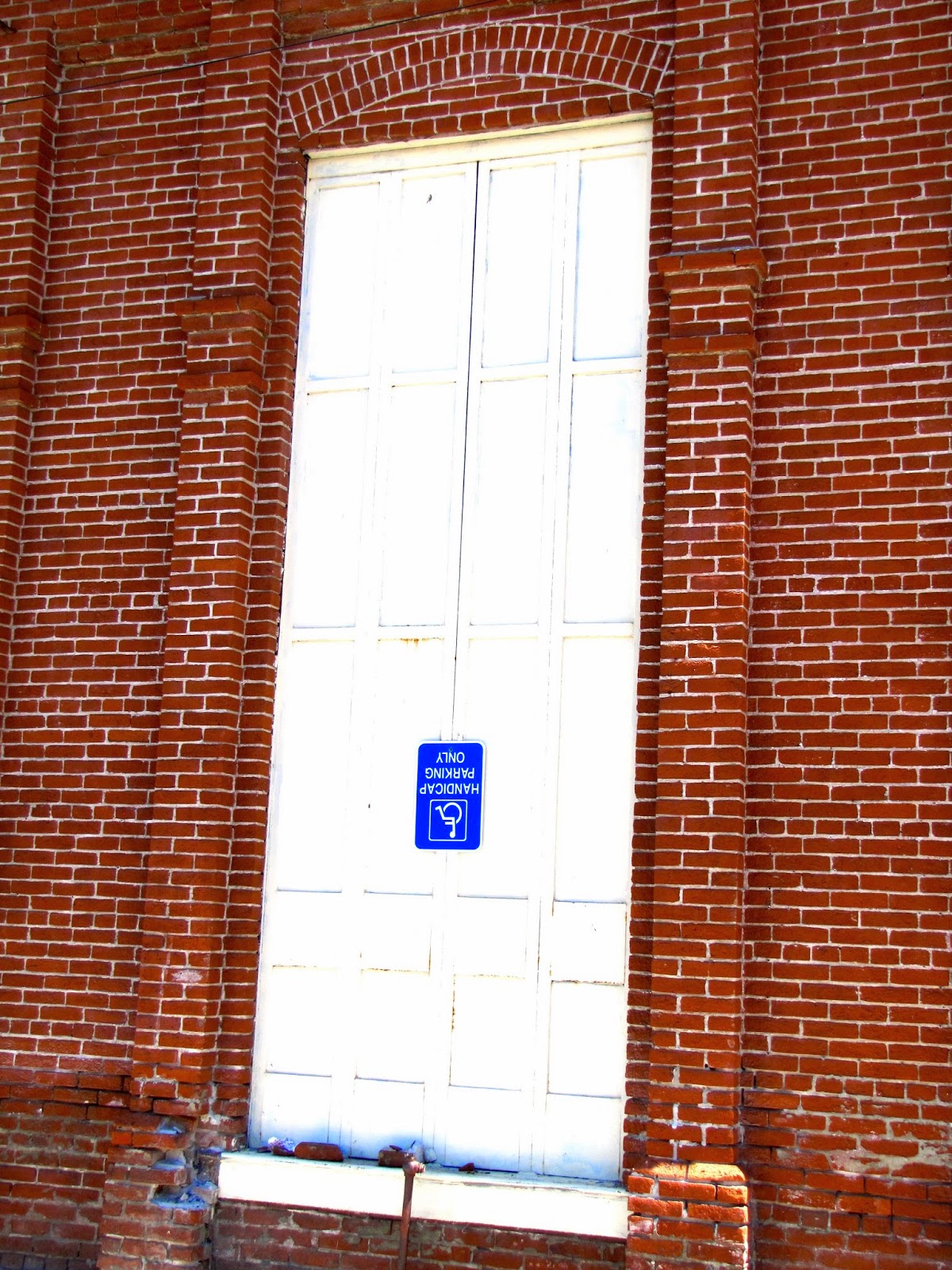 Little towns have the time to indulge its characters and let people be eccentric and silly.  The doors in this picture are on the side of the cafe.  They were built to let those monstrous boards or metal beams move easily in and out of the hardware store.  The doors are kept closed now and serve as a place to hang the mandated sign: "Handicapped Parking Only".  Note that the sign is handicapped itself, hanging upside down.  Life in little towns.