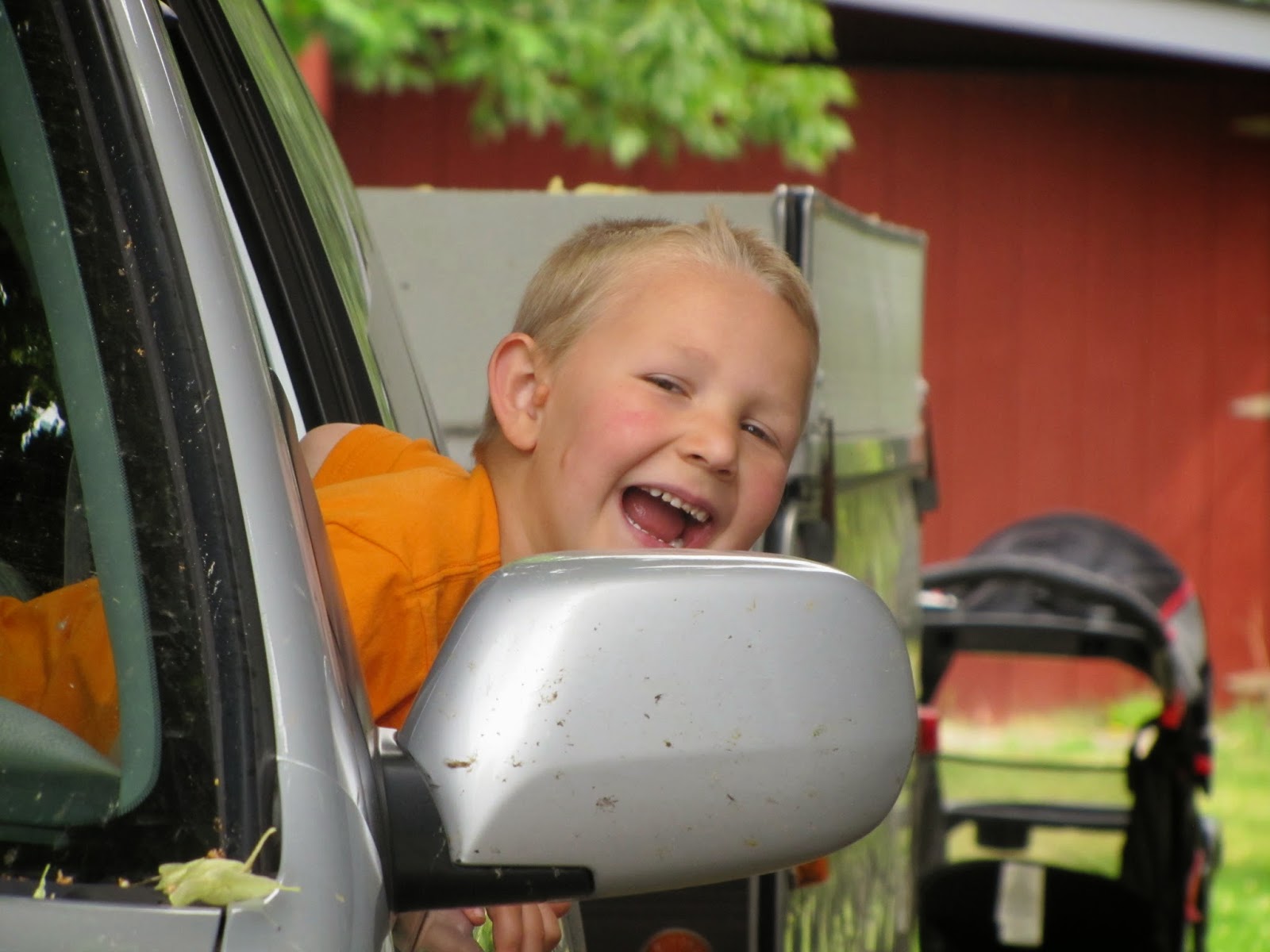 Otto laughed at me.  He had been hanging out of the car window watching his dad rinse the windshield with a bucket of water when he spotted me taking photos. He was in the car ready to travel to his grandparent's house six hours away for the Fourth of July. Already in an exuberant mood, he flashed his best smile.

Earlier in the week Sean and Naomi had backed into my driveway with their ever so cool foldout old camper.  Their three boys spilled out and all began helping their dad raise the camper shell.  They knew where the tools were stored and how to set up the stairs.  No child seemed without a task and there was very little skirmishing for a turn at an important job. You might be thinking that the three boys were all older than they were.  Their ages were two, four and seven.  Each one handled the tools and knew where things were stored as though they had done these tasks often.  No one whined, no one complained; they just cheerfully went about setting up, unloading and calling to me to see this feature or that.  Sean, their dad, interjected an occasional suggestion or admonishment always in an encouraging tone of voice.

All went well until the last step, when the metal rope wrenching the camper top into place, slipped out of a  clamp.  Prior to the last step Sean had the boys stand back just in case, keeping them safe. Work came to a halt.  A quick visit to Billie, the best mechanically-minded neighbor, brought assistance immediately.

Billie and I crawled under the camper to make a repair, when who should also arrive, but the three boys!


So there we were adults and kids all squeezed under the camper.  Nobody was yelling at the kids to get out of the way or acting like their crawling in the dirt under the camper was hazardous or messy. 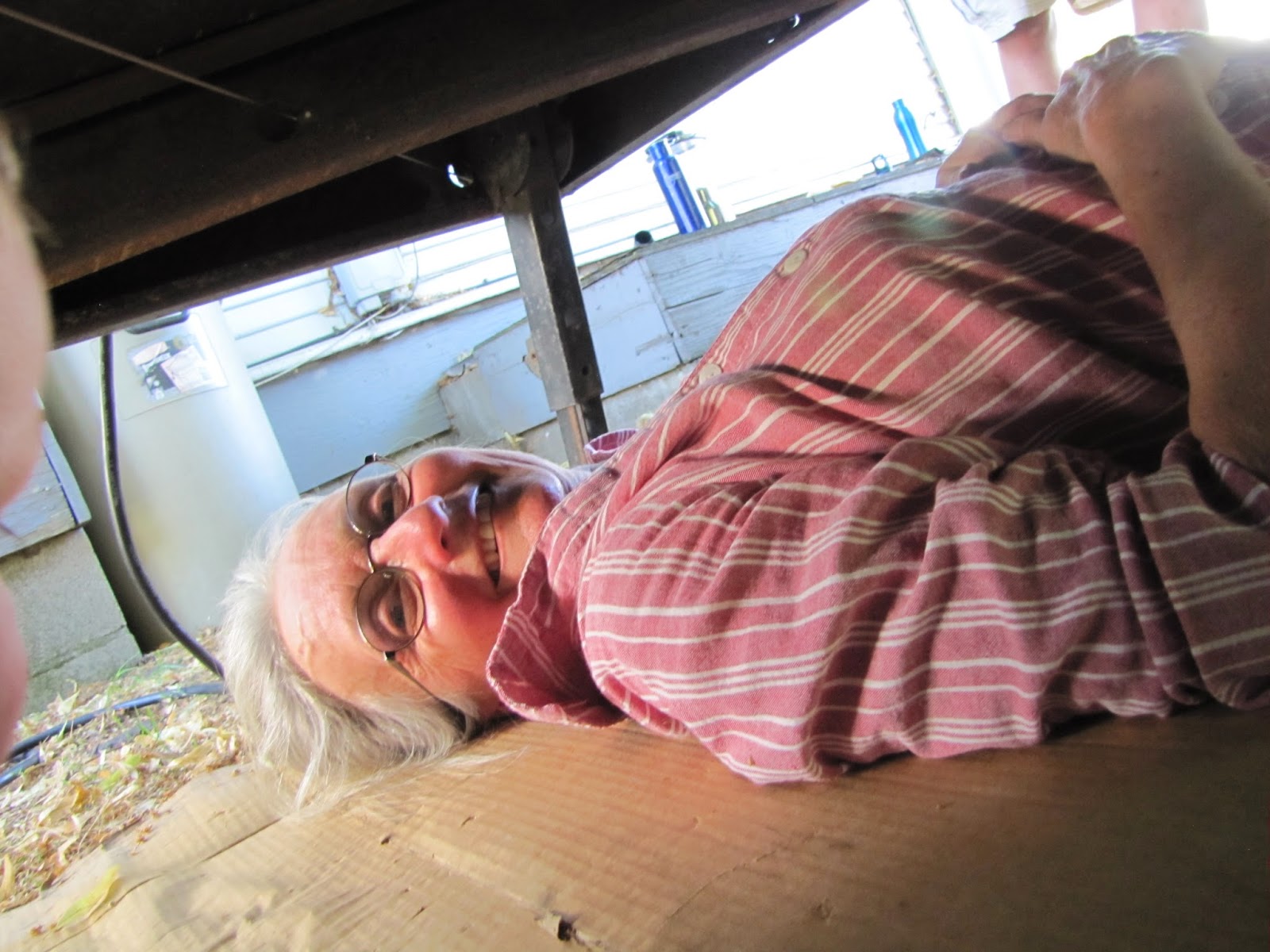 One of the kids offered to take my picture after I took theirs.  There was no fighting about who took the photo.

Do you understand how rare this whole episode is?  The parenting skills required to raise joyful, responsible and engaged children are many and subtle.  Here is the family bio: 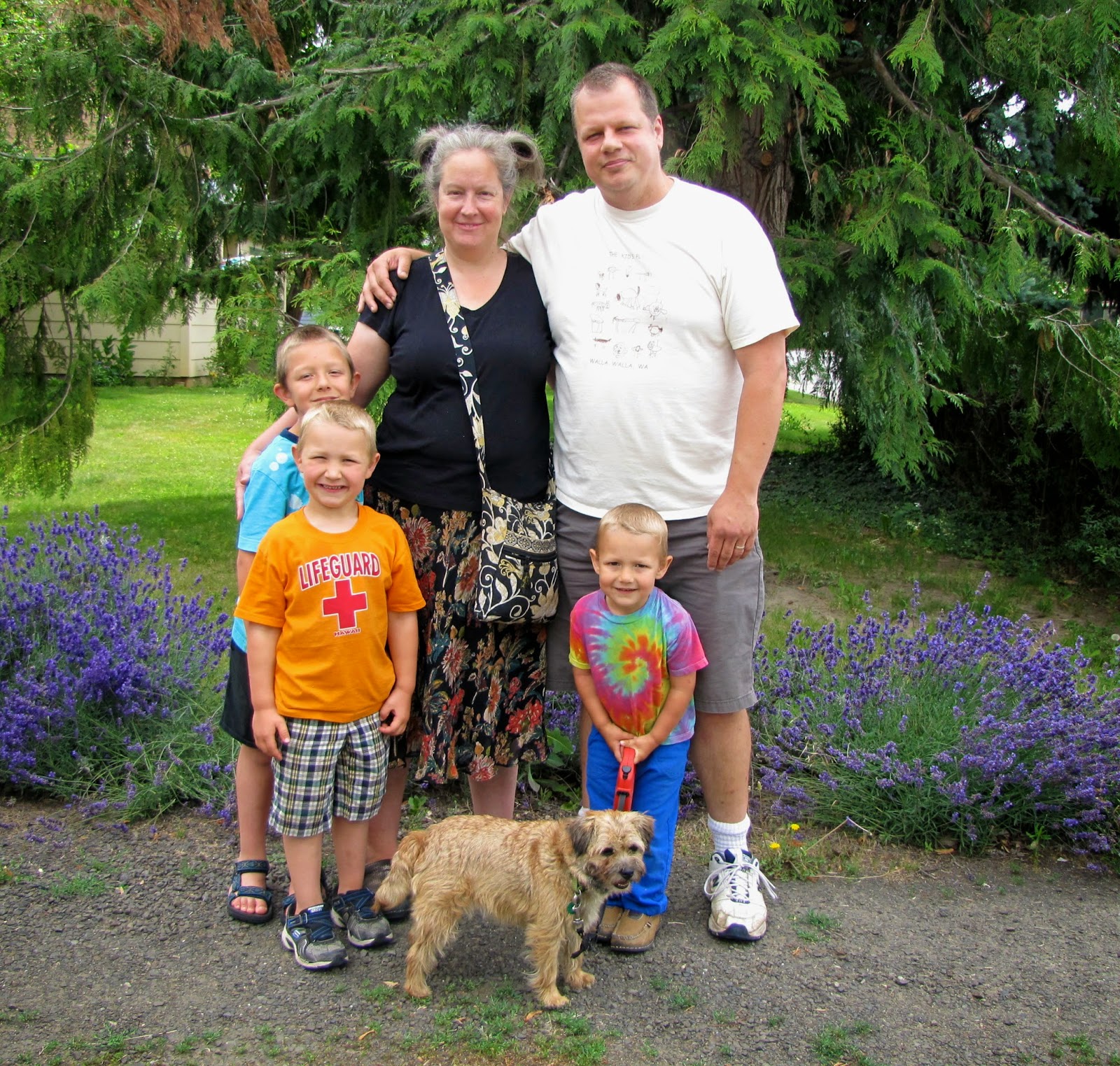 Sean is a first grade teacher.  Back in the early 1990's he taught at The Kids' Place and became a beloved babysitter for my daughter, Molly.  She called him affectionately Seany Boo.  Naomi is a stay-at-home mom and an avid school volunteer.

Their children are all distinctly unique.  August, the oldest, loves any opportunity to explain things like how fireworks are made.  Otto was the official dog tender.  He even came up with a solution of what to do with Lizzie while he came to help me set sprinklers.  He put the dog's leash in the camper and closed the door allowing pup to wander only so far on the leash.  Zephyr was in charge of door locks and books.  With the nimblest fingers he managed to lock every door he entered or exited.  (We were all surprised to be locked out on occasion.)  No one yelled at him.  This curiosity will pass.  The family felt like a smoothly functioning whole.

Healthy families work together and play together.  There was an imperceptible shifting between Sean and Naomi.  Sometimes Sean had the kids off to a park and Naomi rested or Naomi took a turn so that Sean could read.
The children played outside, exploring the stream area, sharing the hammock and the swing.  They pointed out cats, helped each other and ever so infrequently had some minor problem that they often solved themselves.  The parents were conscious of the children's whereabouts, engaged them in interesting conversations and made parenting look easy. 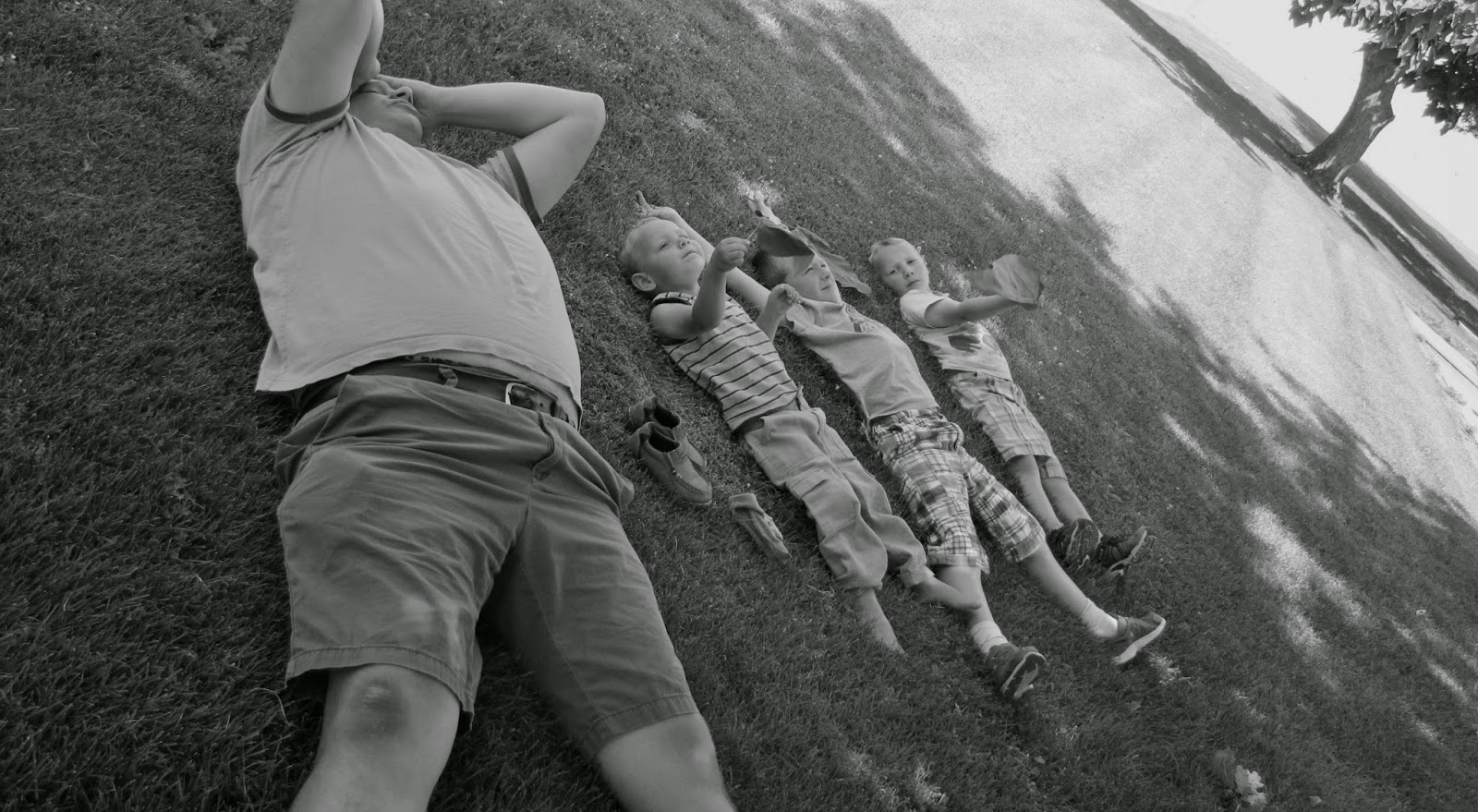 One afternoon we went to the Fort Walla Walla Museum for a couple of hours.  There was no hesitation to go to a museum even with a two year old and a four year old.  As we wandered in and out of buildings displaying farm equipment and mules, Sean and Naomi allowed the children to help set the pace.  When Sean laid in the grass between the buildings the children came to copy him.  They jumped up once and gathered catalpa leaves to use as fans.  August helped his brothers by reaching up and getting them their own leaves. 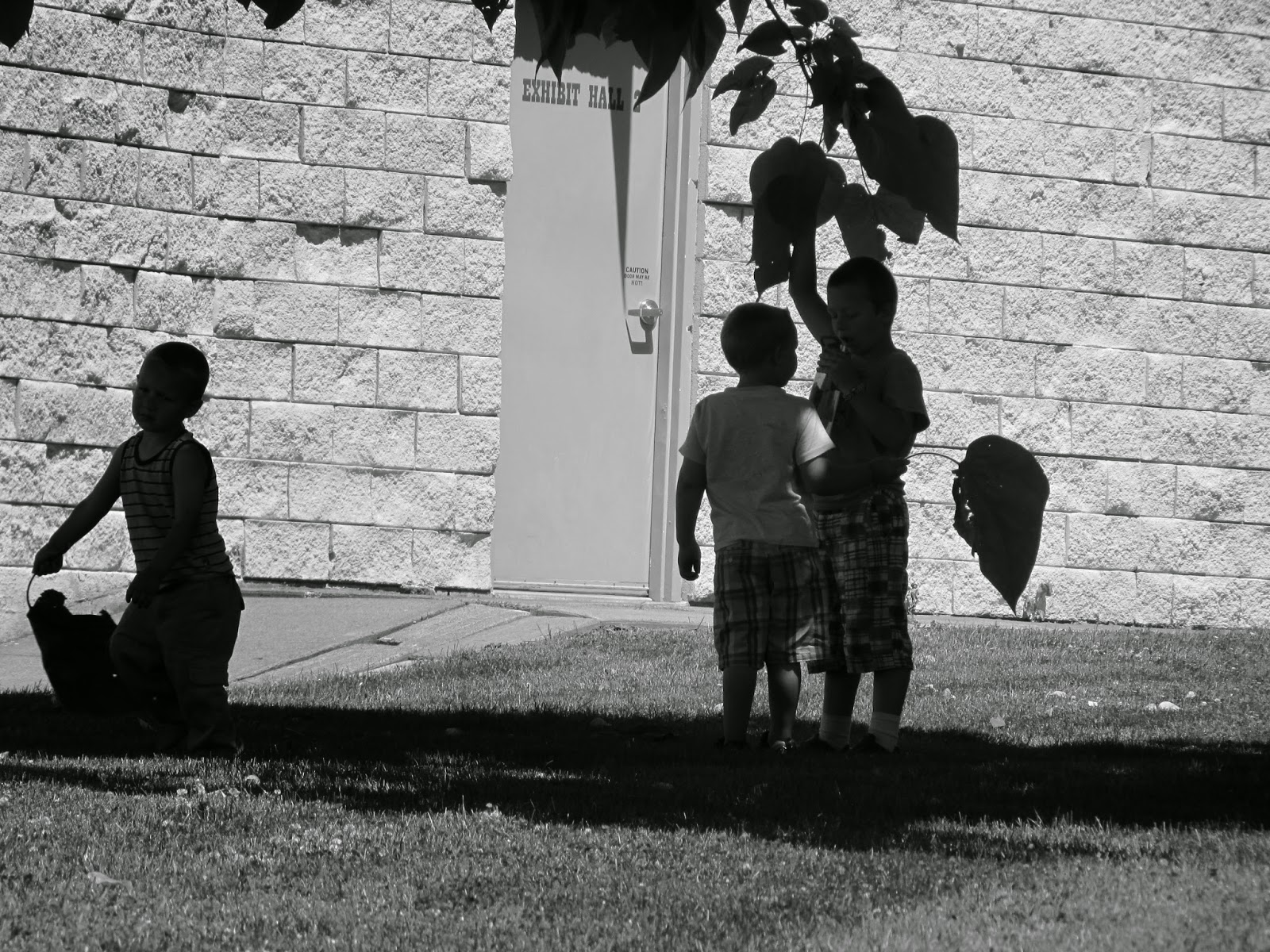 Naomi sat aside enjoying her family.  No need for yelling.  The children were engaged where ever we were.  Since electronic devices were not readily available for the children, no one had to say, "Put away your Game Boy and pay attention. 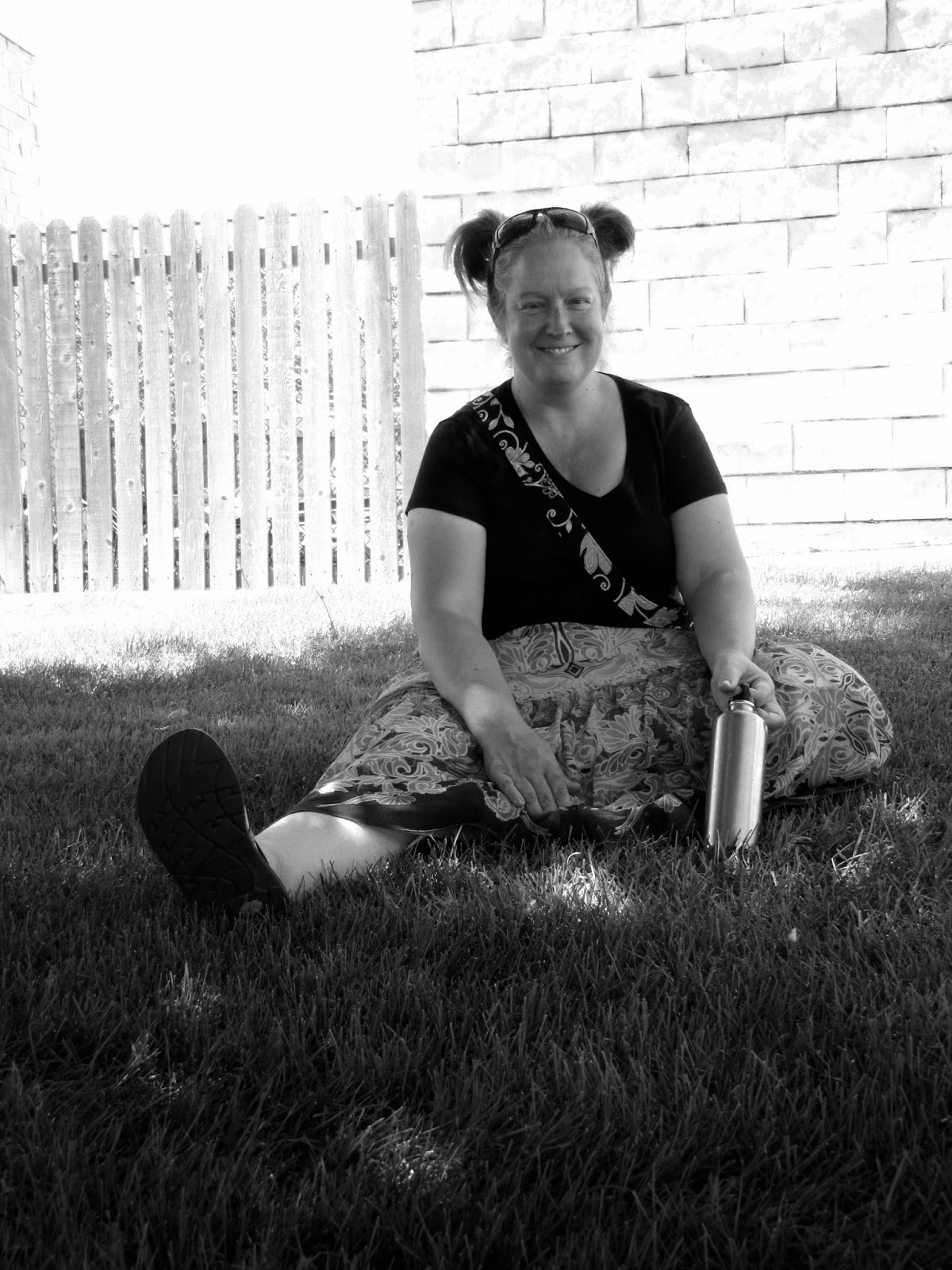 Sean parented from a relaxed and loving background.  The children hung around him.  They wanted to be with him and their mom, Naomi.
As bedtime approached, the children scurried to get into their pajamas and be ready for the nightly bedtime stories.  I was lucky in that I got to read from some of my favorite children's books.  Each child sat respectfully listening fully engaged each night.  There were no arguments about which books or who choose what.  We just read.  The second night Zephyr eagerly choose a couple of his favorites and so we reread  "Baby Come Out" and "The Catalog". 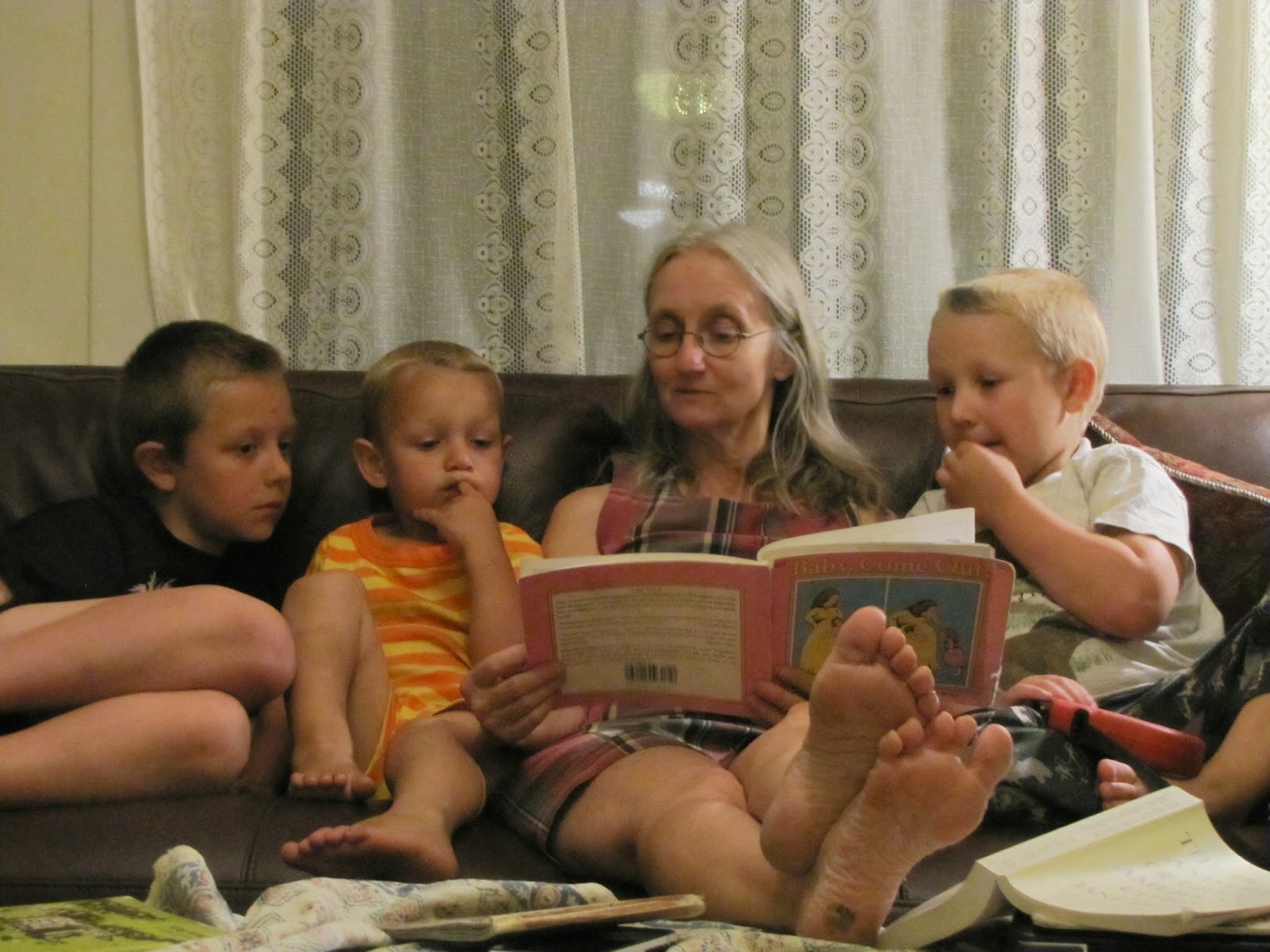 There should be a book about this family, not just a blog post.  The best part would be the photos taken by the joyful boys.  Does your child, if you have one, take photos?  The gesture of letting a child have responsibility for a camera could be an indication of a child being raised to joyfully be of this world noticing working adults, architectural details and the antics of siblings.

Posted by boxoftales at 8:05 PM