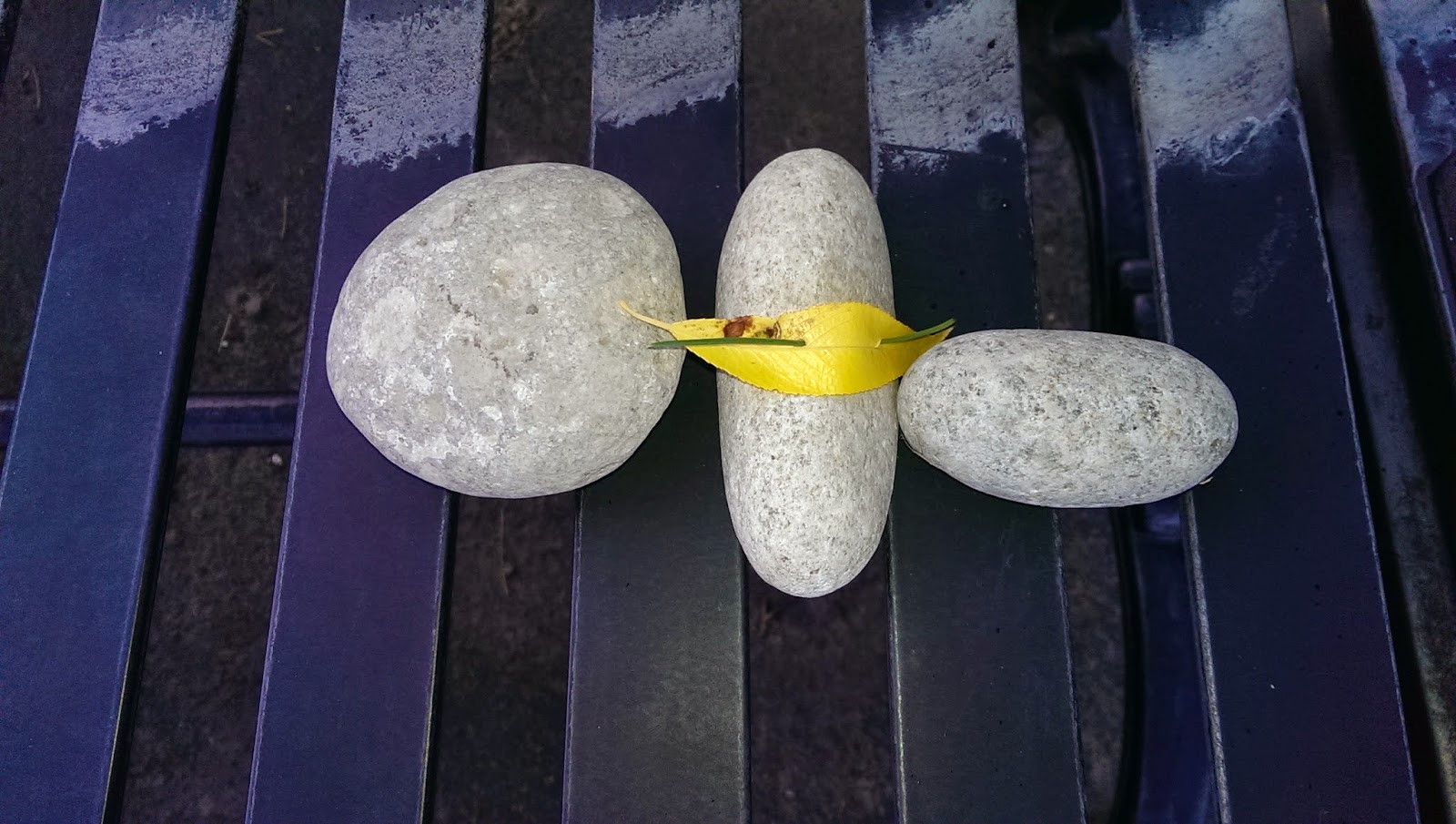 Stones have been speaking to me since I was a child.  Out walking pup one recent evening, I deciphered the message of these stones placed on the deep blue park bench.  The fullness of the first stone spoke of satisfaction.  The middle stone wearing the silly yellow cumberbund was saying, "Laugh, don't take life seriously."  The last stone was quietly whispering, "The end."  The stones precise arrangement were an indication of a frequent stone writer.  I didn't pause to respond, but I should have.  I might have left a message that said, "I like your silliness and thanks for leaving me a note." (In stones, of course.)

Stone movers are often a subtle bunch.  You can spot them by the motion of the hand in a pocket rolling a rock about feeling it's smoothness.  When I dropped my daughter off at college I collected a smooth round stone at Birch Bay beach and slipped it into the right pocket of my feather down jacket.  The stone remained there for all of the years of her college and beyond.  Each fall as I took the coat from summer storage and slipped my hand into the pocket, the stone would remind me of the joy of her successful launching.  The stone held images translated to my palm and written on my brain.  I lost the stone this year while traveling.  Likely it now lives on the edge of someone's washing machine or maybe it got tossed out into the yard where it will tell other stones stories of traveling in a pocket.

As soon as I realized that the stone was missing, I began looking for another one.  This stone was to mark my launching into retirement and traveling.  Pup got used to my stop-and-go pace along river banks looking for the smooth tumbled stones 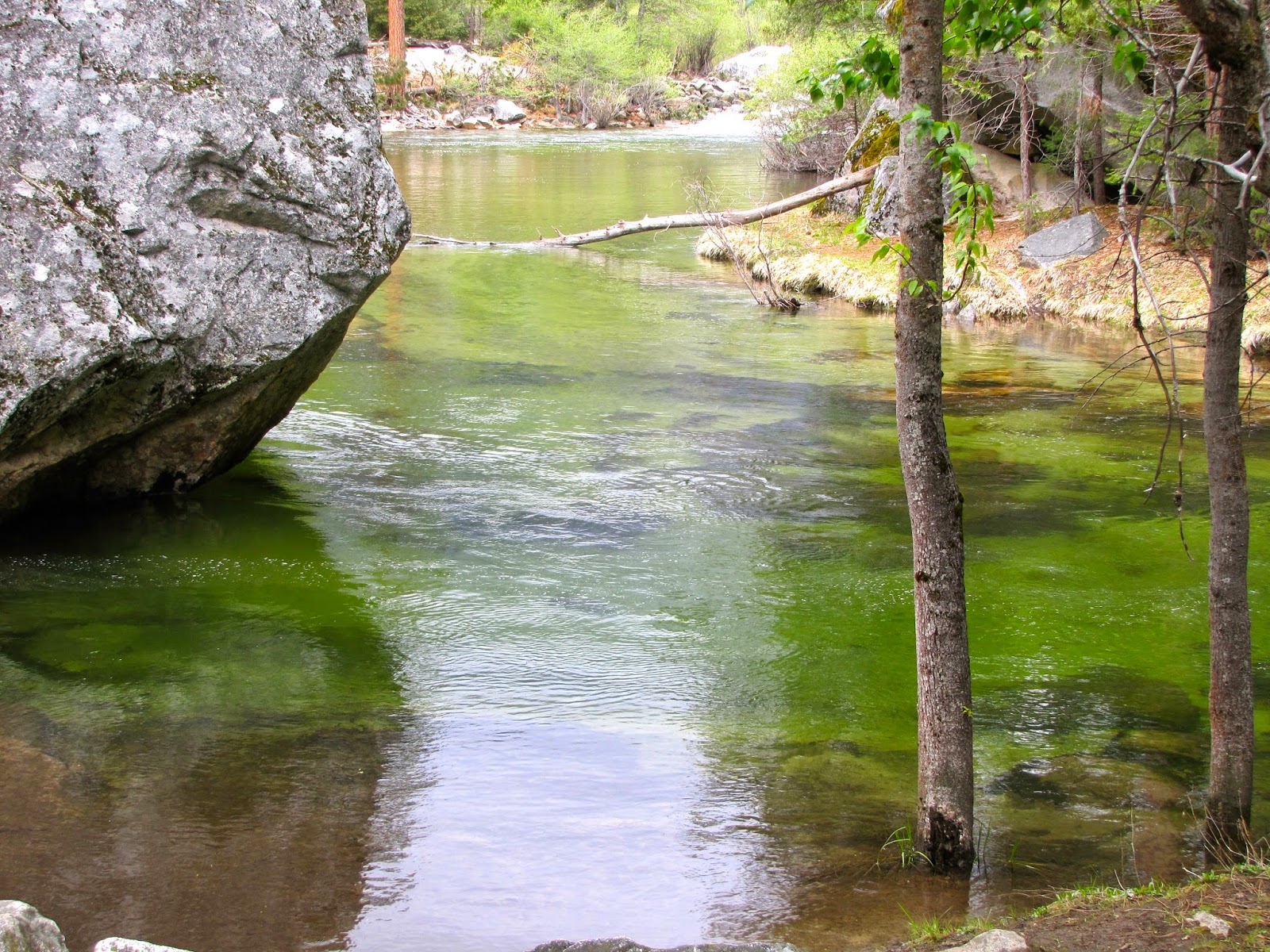 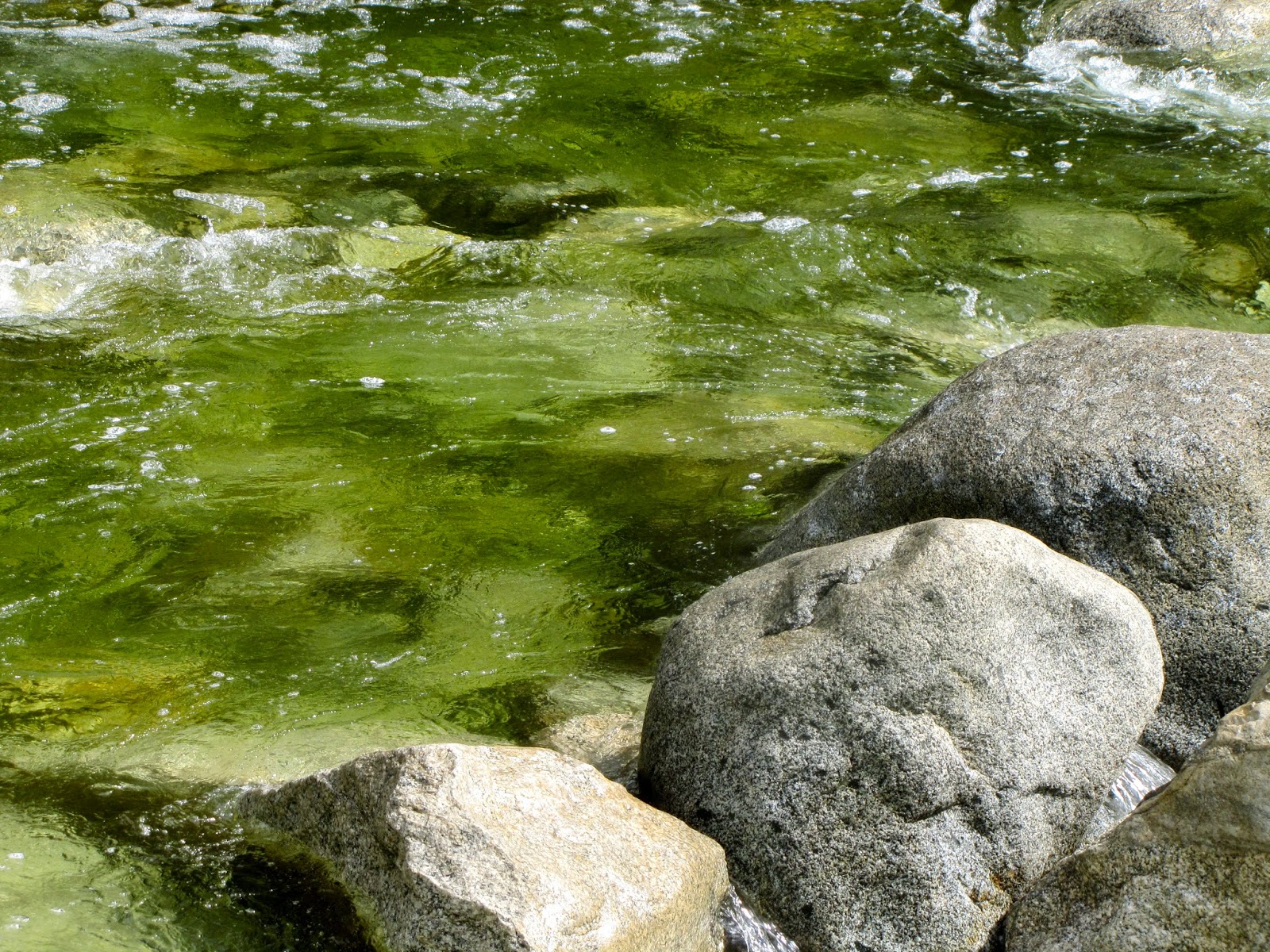 Our erratic walks along the edges of the ocean waves brought alphabets of stones my way, 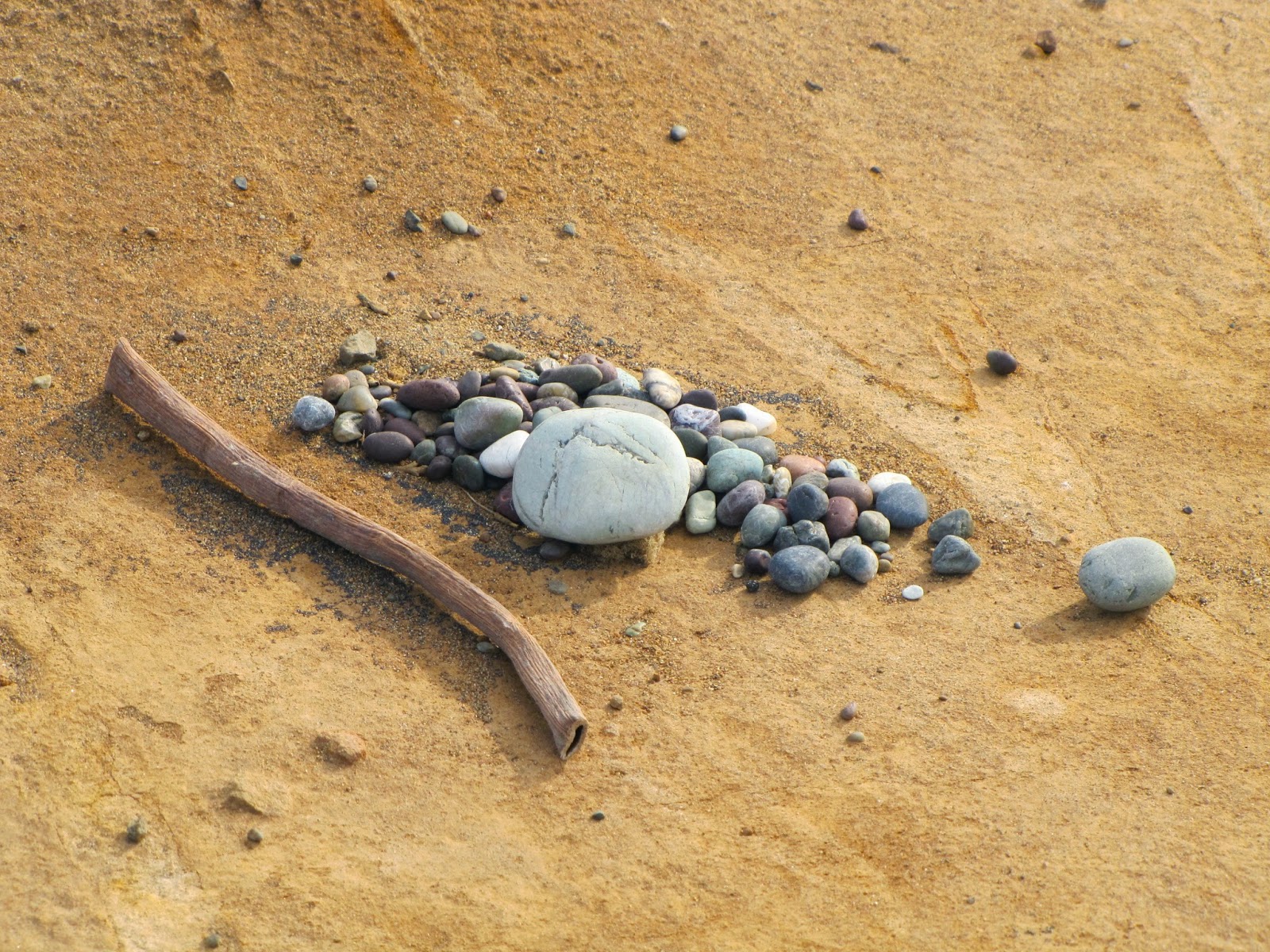 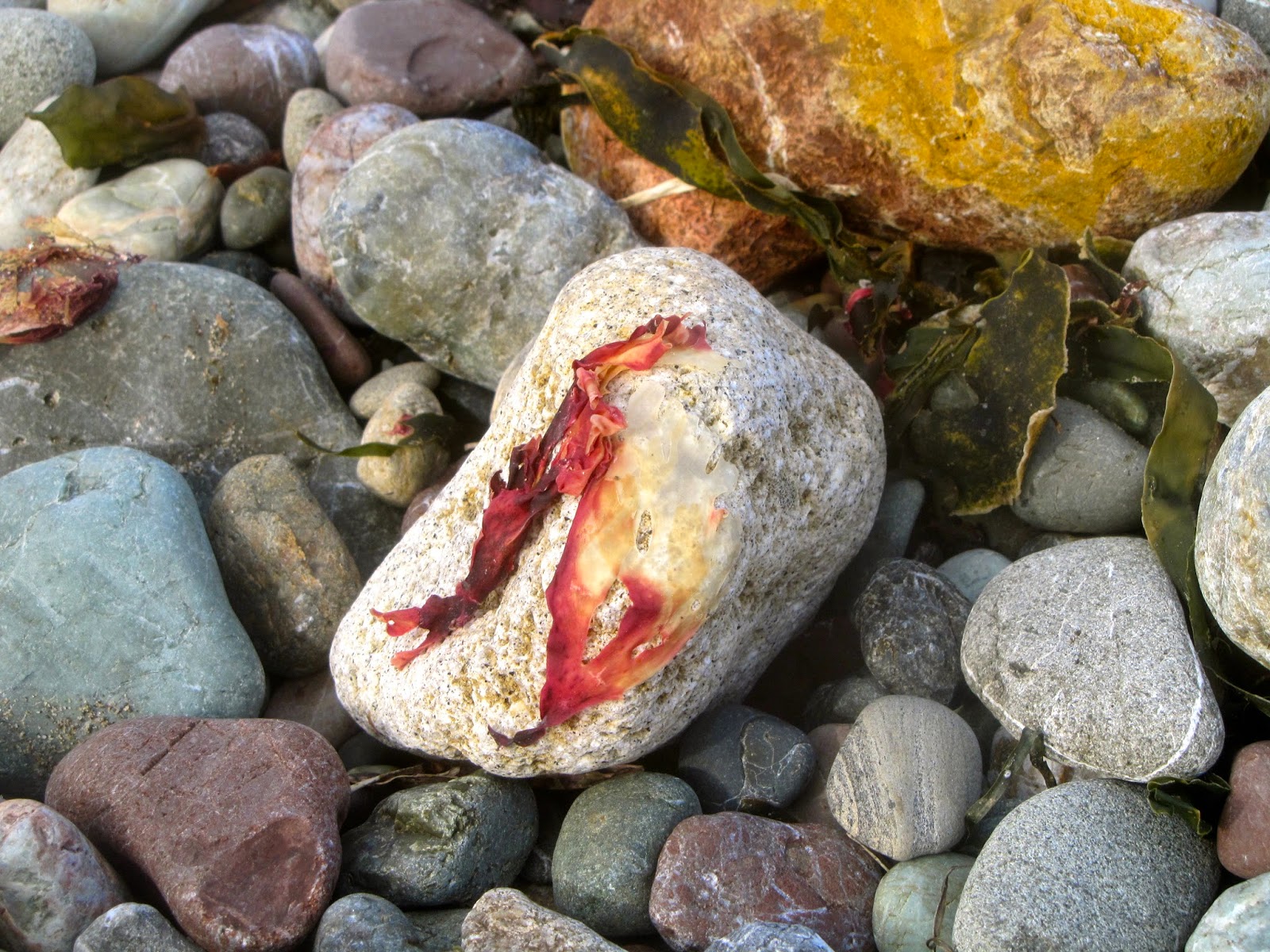 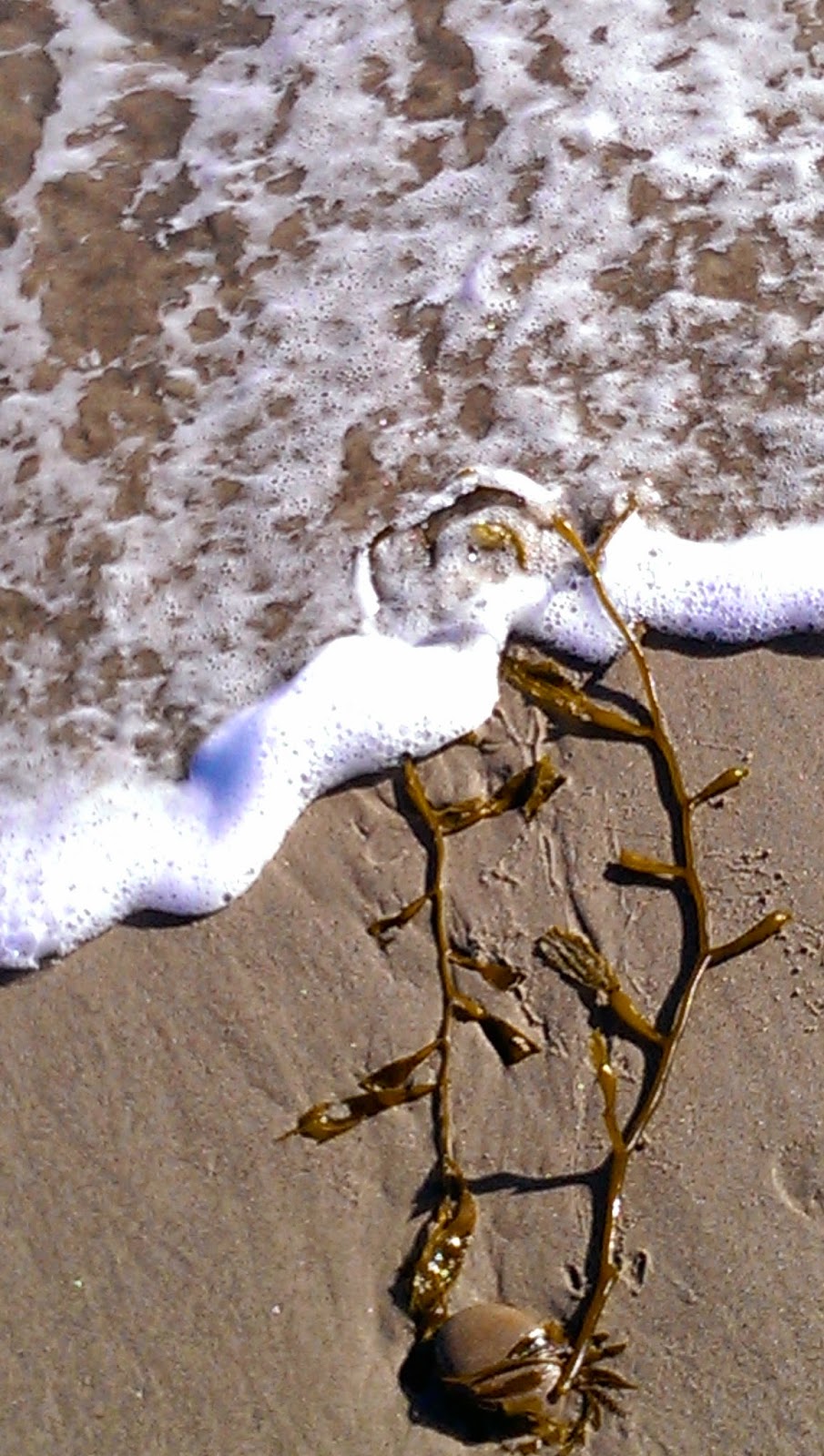 I found sentiments written in stones by others. 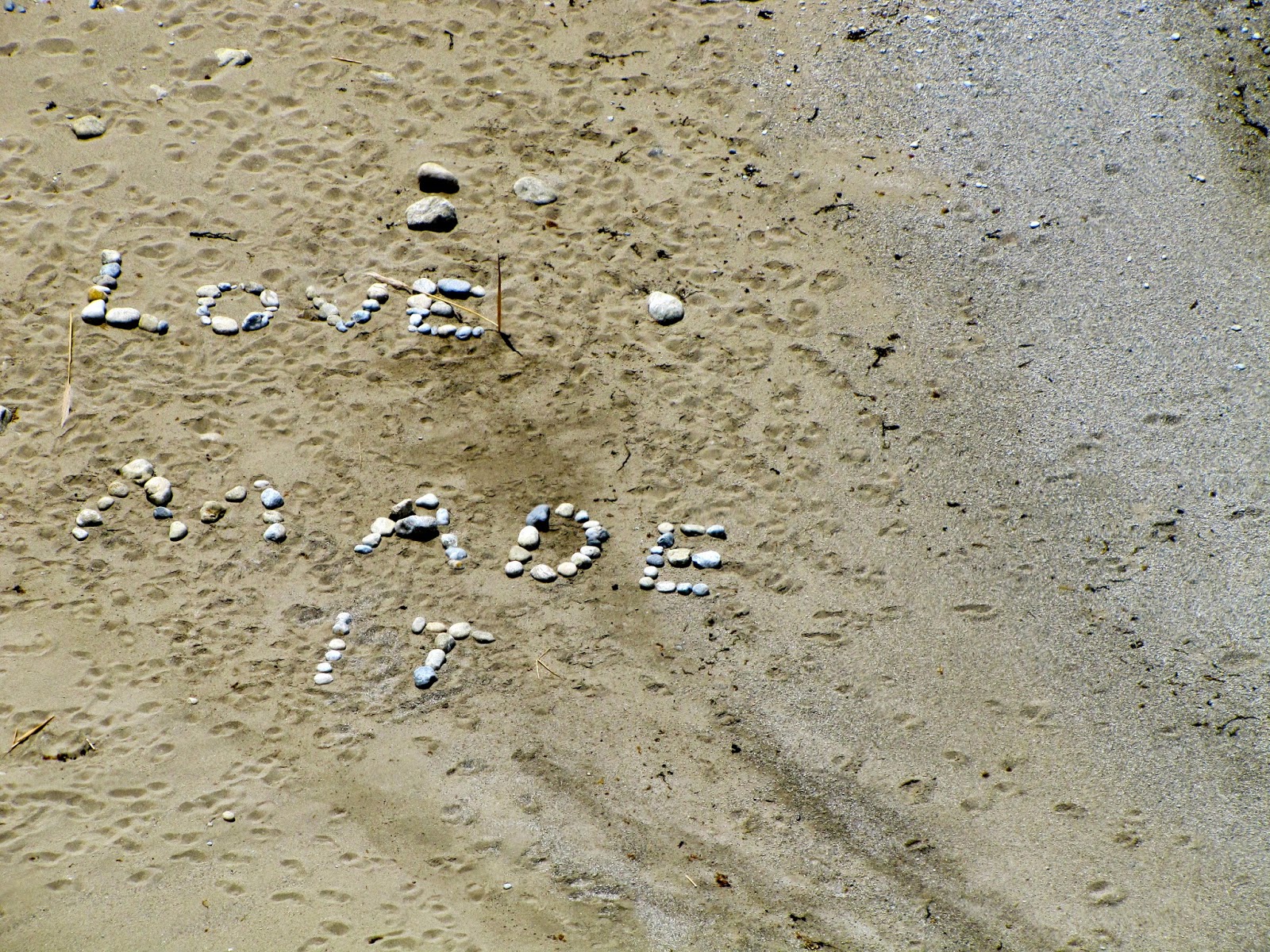 I gathered a pocket full of stones and a cup full of stones uncertain as to which singular stone would eventually speak to me.  Now at home when I pass the the bowl of stones, I stop and touch each one again, trying to determine which is suitable for such an important story. 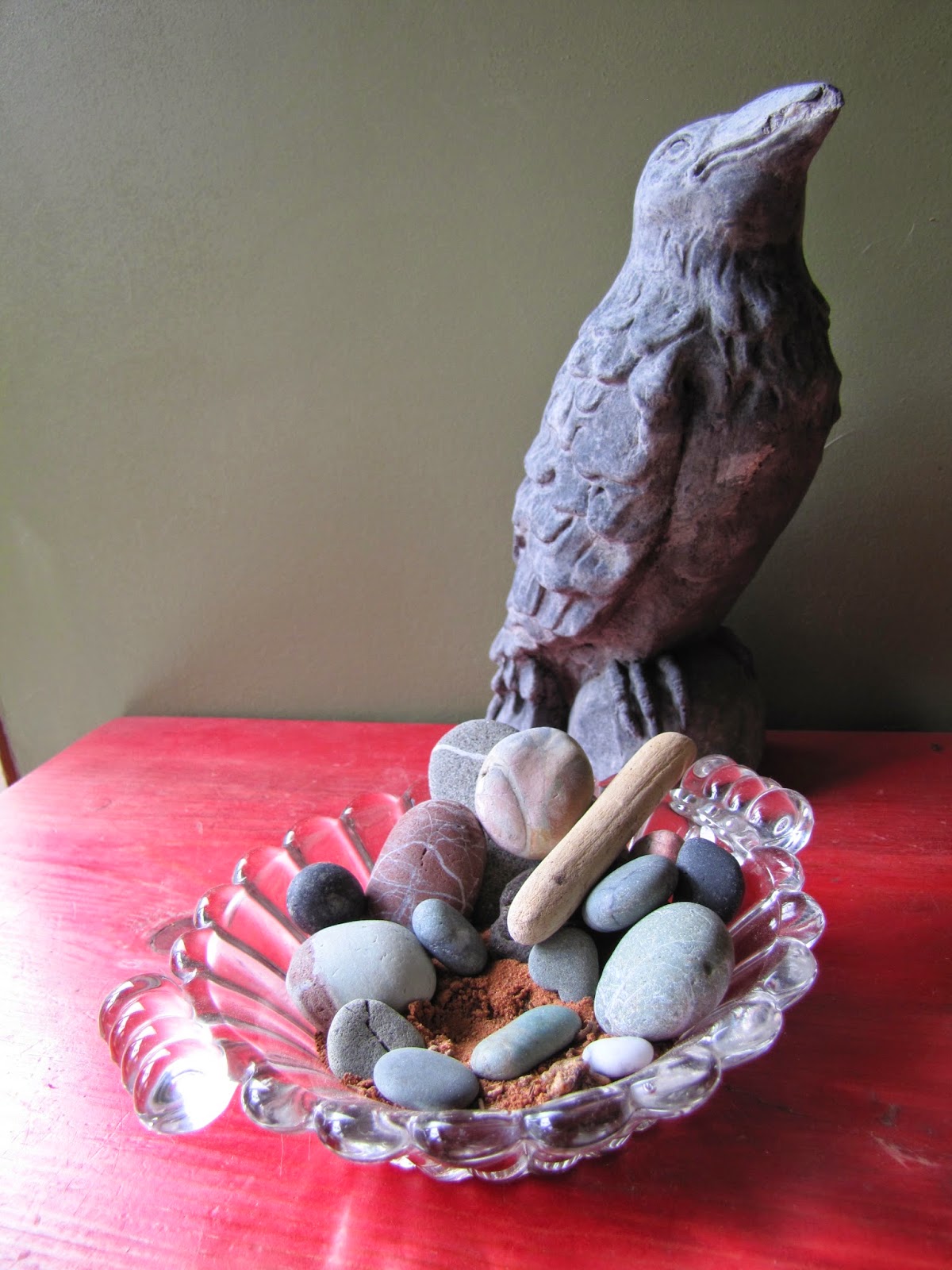 The bowl of small stones sometimes shares the table with a pot of million-year old, billion-year old rocks gathered from an ancient riverbed that emptied into the Snake River.  Resting on such volumes of history is the striped rock found in a pile of boulders during my travels.  The morning sun makes that stone almost glow. 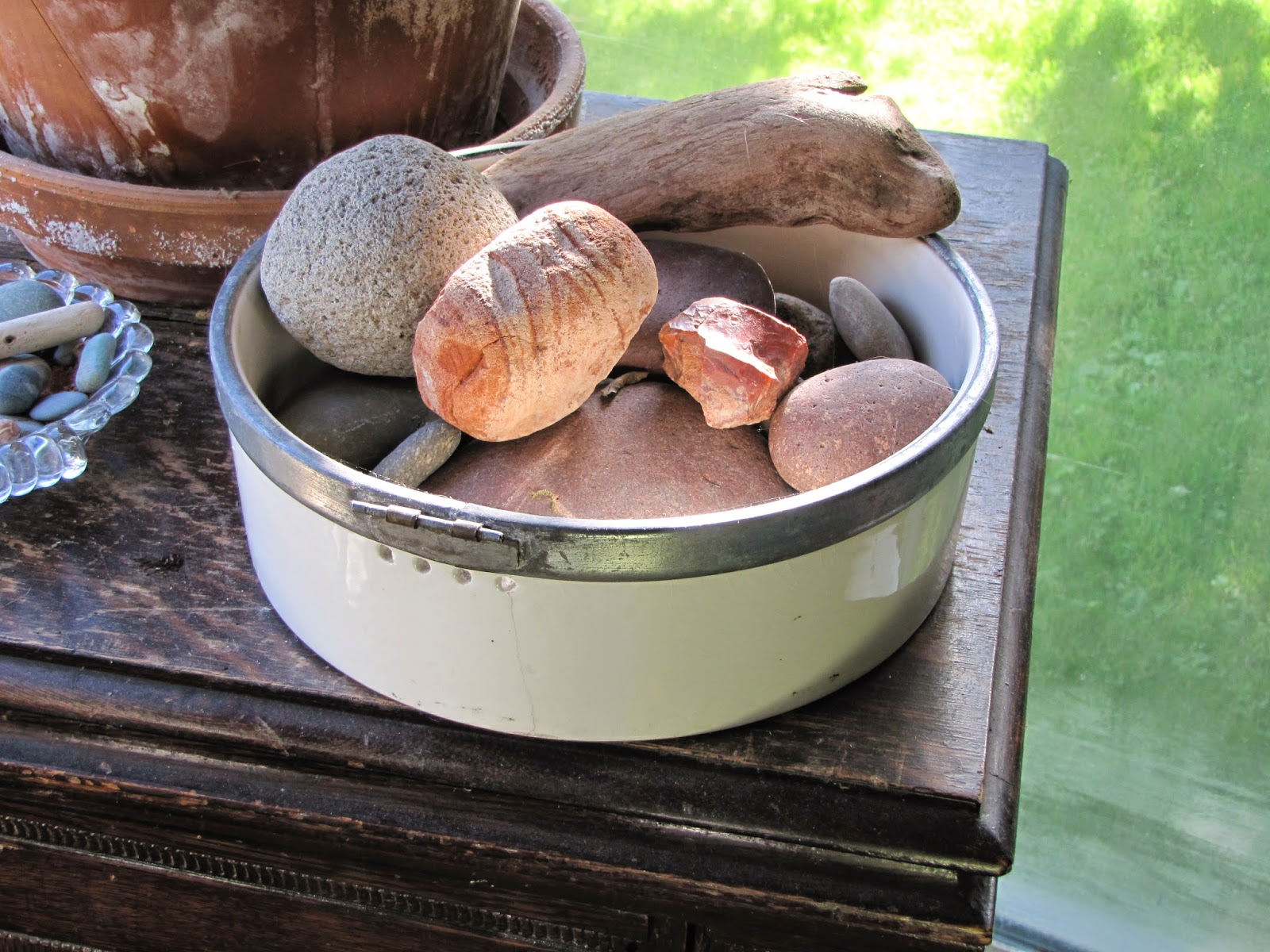 I think that I have chosen the stone to speak on behalf of my new reality.  The size is right for rolling about in my fingers in a pocket.  The smooth surface tells the story of the smooth transition from work to traveling. 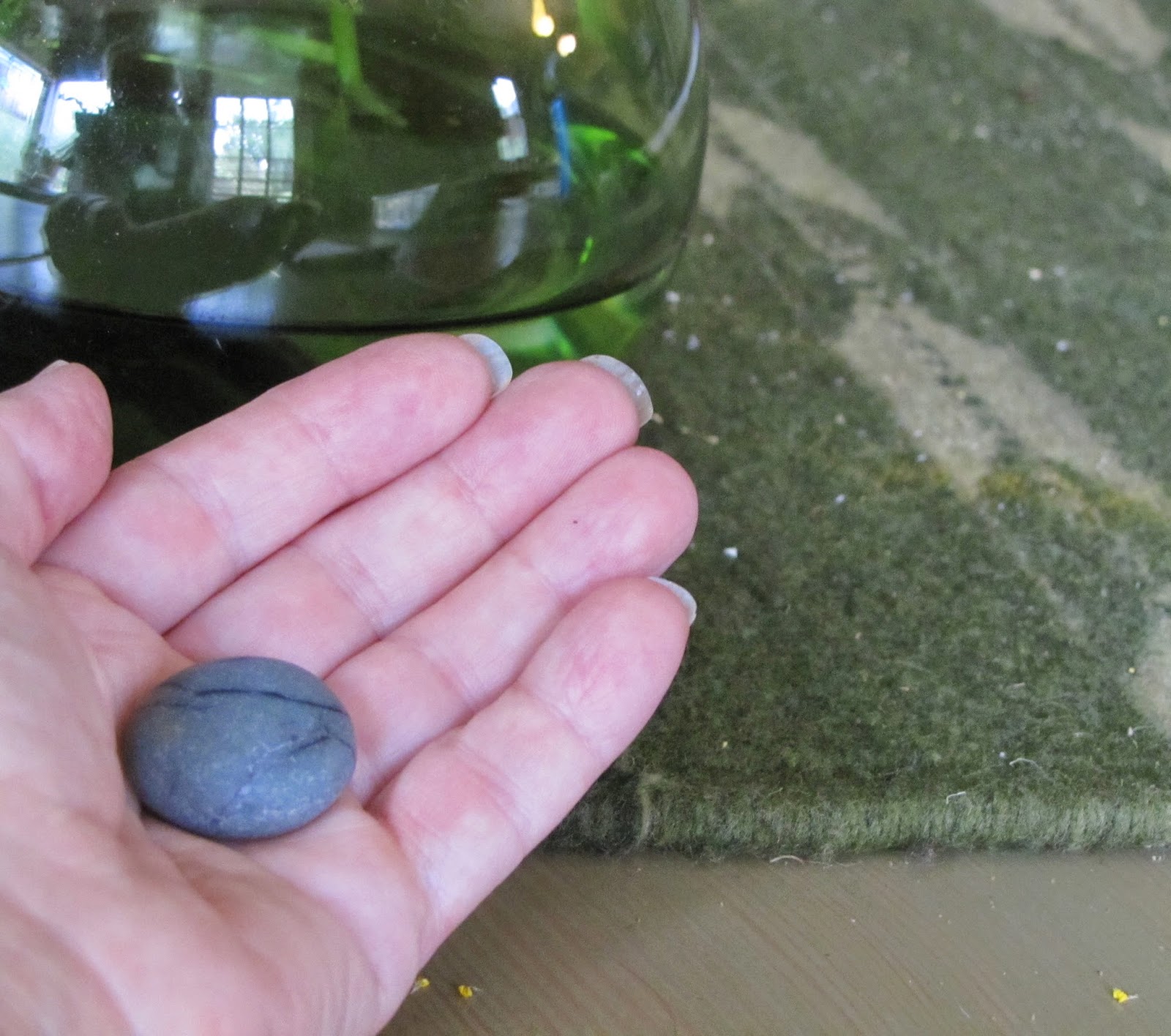 I have decided that I shall begin speaking in stones more often.  There are stone-speaking podiums everywhere.  Park benches, lanes, on boulders, sinks, railings, window ledges, and other edges of civilization.  Philosophical discussions will arise as to their meanings or stones will be rearranged for a new meaning.  Should the stones speak to a heart, they might be purloined and tucked into a pocket.  You too can speak with stones.  Say what? 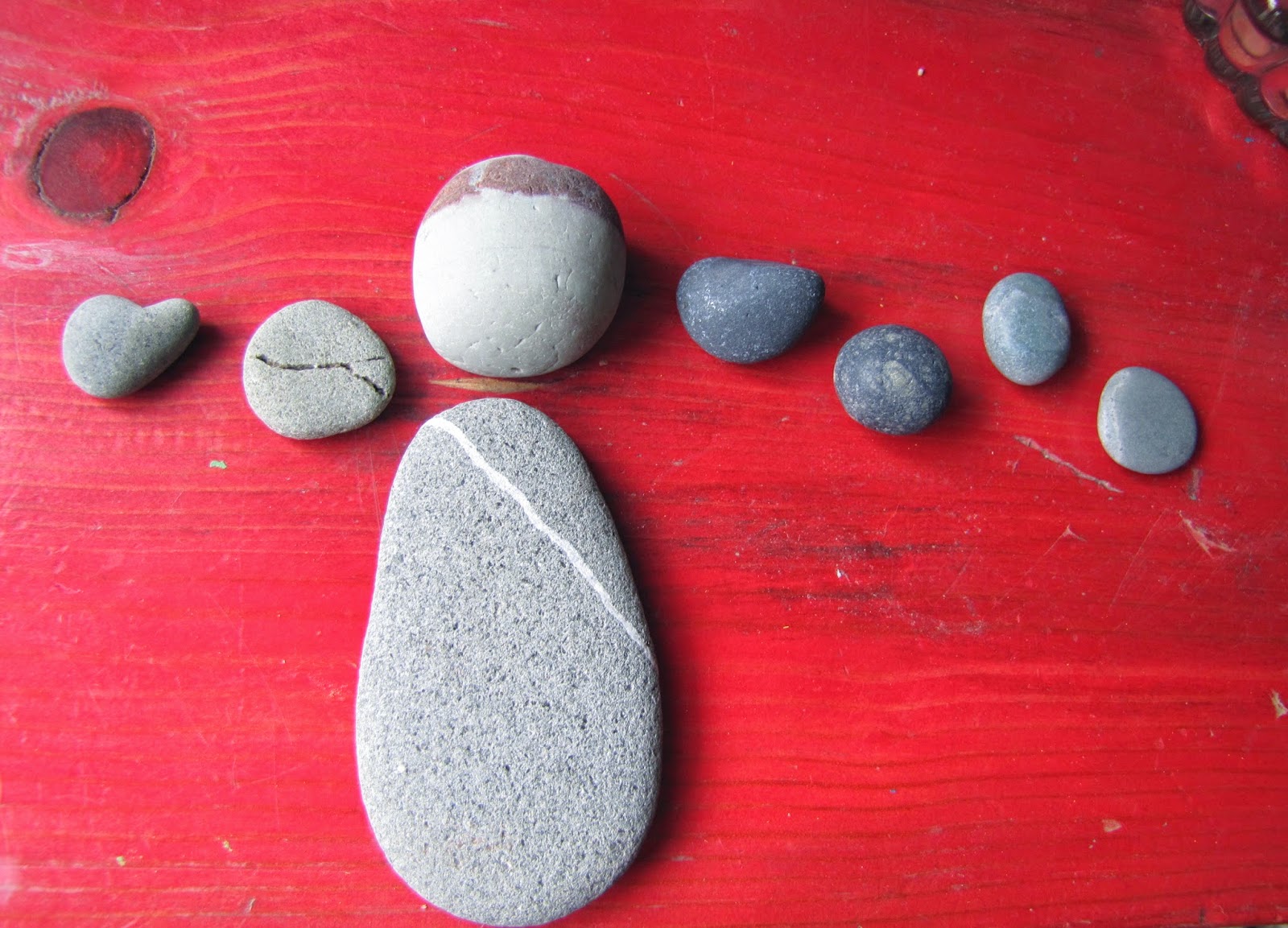 Posted by boxoftales at 5:23 PM