Portraits of Dog and I 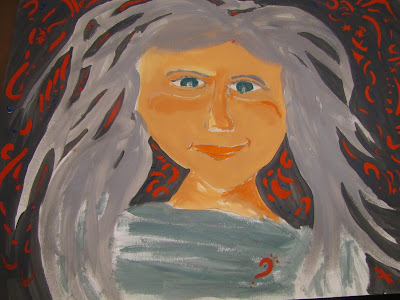 My Self- Portrait.  "Happy Lady with Wild Grey Hair".

This painting was inspired by the night of my sixty-fourth birthday. A dear friend honored the occasion by setting off a huge firework's display on the beach.  Earlier I had walked seven miles along the surf and up into the hills.  As the joyful day ended with the light and warmth of the campfire, backed by the deep bluish-black sky and the silly sounds of the erratic fireworks, I could feel my brain contently tossing about the questions and decisions from the morning's walk.

Traveling was to begin.  It was settled. 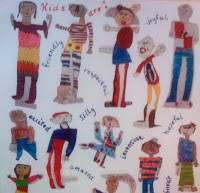 Although I have been teaching children to draw and paint self-portraits for years and years, I had not allowed myself the privilege of painting my own portrait.  I couldn't seem to do both.  If I was at school I didn't have the time and if I was home I didn't have the materials.  I also didn't want to discourage children by competing with them as an adult artist.  Over the years, children drew portraits of their faces twice-a-year.  Eventually this evolved into drawing and painting full-body pictures like these on the right.  The process and the results were so satisfying for them and myself.  I must admit that I was envious. 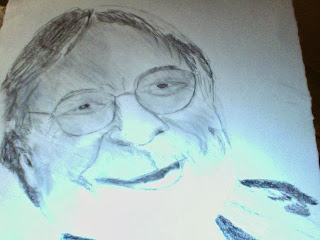 Gary, my dear late husband, and I were involved in a cancer support group.  On occasion a painting class was offered by Barbara, the beloved, artistically-talented social worker.  I never got to go.  I was always working.  Gary and I did manage to take a class in drawing portraits.  This picture is a portrait that I did of Gary from a photo. Barbara's class didn't ordinarily work from photos. (Although Gary insisted in doing so when he painted!)

Silence.  I never really thought too much about the silence that can accompany painting.  Barbara  insisted on silence.  No talking, no music.  Enough silence to listen to the heart and the soul.  What wanted to be painted?  You had to listen.  What colors, what medium, what feelings?  For six weeks those of us in the class listened.  I liked the habit.  I am quite comfortable with silence.  I think that this will do me well on this long trip.  The silence should let me listen to myself. Want to stop?  Explore?  Keep on?  This is a good habit for traveling.

I have a friend.  She traveled to Mexico in an old Volkswagen bug with a companion of hers.  These two came to an agreement.  One day they would both talk.  One day one would talk and the other listen.  Then visa-versa.  The fourth day they would both be silent.  On a day when both were silent the car slowly came to a stop on a desolate stretch of road.  No word was spoken.  Silence.  Along came a truck with a bunch of guys.  The truck stopped.  The guys tried to determine what was wrong.  They were met with a puzzling silence and yet they figured-out that the car was on empty.  So the guys filled the car's tank from a barrel of gas in the truck bed and left calling into the silence, "Adios!".  I love this story.  It is a funny story.  I hope my travels have this kind of luck, measure of silliness and time for silence.

Least you think that that sunny facade at the top of this post is all there is.  I'm adding one more portrait. 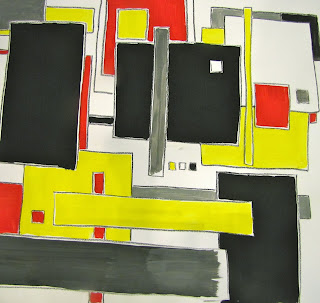 Some days start with that deep black rectangle to the left.  It is grief, not depression, but grief.  I miss Gary.  This self-portrait started with that black hole on the left.  I'm not sad about this grief.  If Gary had loved me less that hole might have only been a stripe or a dot.  But I was loved.  Each color is like a step.  Up and down followed by up and down all day long.  The direction doesn't worry me.  The color doesn't worry me.  The feeling doesn't worry me.  One follows another.  I don't seem to ever be stuck on any step, any shade of feeling.  When I describe myself as happy, I am happy.  My soul is always moving. 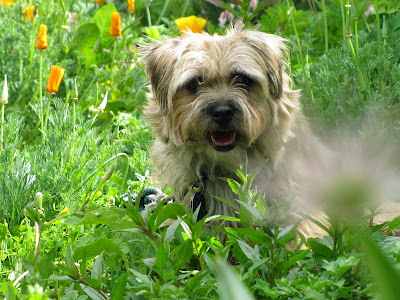 Look at this face.  This devoted look is the look little dog gives me.  I am so excited about traveling with little dog. 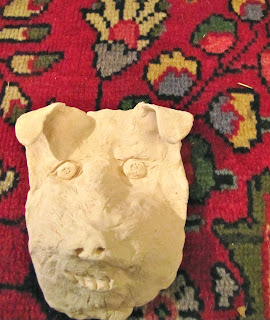 Little dog has had a sculpture made of herself.  Borders are known for being "calm, but tenacious in the hunt".   This is pup's ferocious face.  Our previous border killed a few possums and attacked a badger in our yard.  Borders were trained to run with the horses in fox hunts.  They have long legs for a terrier. Walking a border on a leash is a joy.  They check in to see which way you are going, just like as if you were the horse.

Pup doesn't yet comprehend that she will be by my side for the long trip.  I can tell you that she will be happy.  New smells, new people, new dogs and me!  We travel well together.  She is dressed in her wilder winter coat.  Should you cross us in the spring, you might not recognize her.  She'll need another portrait.