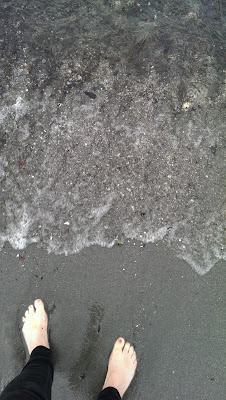 Lewis and Clark surely took off their smelly socks and well scuffed boots and let the Pacific wash across their feet. The beach at Carkeek Park in Seattle had to suffice for me.  There was no sound of thundering ocean waves. The quiet lapping of the Puget Sound tide contrasted with the "whoopee" sounds coming from my heart.  I have begun my journey with a wash of Pacific water.  The ritual left me with sand in my freshly cleaned car.

Packing the car for a seven-month journey has taken some planning.  At the Oregon Trail Interpretive Museum in Baker City a visitor can practice loading a small wagon with blocks marked with items like "flour", "bedding", "stove" or "china".  The blocks don't all fit, so one has to set some priorities.  I'm already sure that I have more than I need and also everything that I need.  Surely I'll be tossing things aside as I travel.  I'll try not to throw them along the highway!

The car top carrier that I had ordered has proved difficult.  How many people does it take to make a car top carrier work properly?  Six!  Two to snap the box back into the proper shape and load it on the car and two to get the key out of the broken lock and two more to attach straps to hold the box closed.  I both cried and laughed.  Thank God for friends and neighbors.  My car top carrier with it's motley borrowed and new straps looks a little "hokey' instead of the "cool" I had aimed for.

My first day of travel started out late with pouring rain, snowing up Cabbage Hill and then sun streaming through an opening in the clouds in the La Grande Valley.   Early pioneers to this valley were awed by its rimmed expanse.  Many years ago I came across the site of Hot Lake Springs in the eastern corner.  Three million gallons of 208-degree water bubbles up daily into a small lake.  Rushes attract yellow-headed blackbirds, a personal favorite.  Indians stopped here, pioneers and tuberculosis patients.  A sanatorium was built in the early 1900's and eventually earned the reputation as the "Mayo Clinic of the West".  Travelers arrived by train.  When I first saw the old three-story brick building, it was dilapidated.  I became enchanted with its possibilities.  For a short while one could soak in a claw-foot tub that had been hauled down from the rooms above.  The David Manuel family purchased the building in 2003 and began developing it into a bed and breakfast, a foundry for David's bronzes and an RV park.  Hard, hard work.  Worth a visit:  http://hotlakesprings.com/


I couldn't resist starting my trip with a soak in their mineral springs.  The Manuels have renovated the many-sided building that sits by the lake.  Water gurgles up into a large stone box emitting steam.  The water is then cooled in tubs to  more tolerable 105 or so degrees.  I alternated a meditative ten-minute soak with standing at the cool open window overlooking the misty lake.  Pure joy. 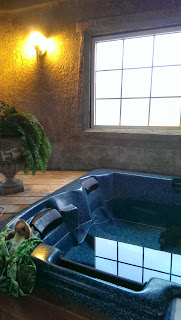 Water has both the properties of certainty and uncertainty not unlike my trip.  Gravity makes water seep through any crack, follow any downhill path and move as a tide.  I can catch water with a good plug.  Sitting in this tight tub I felt smug that my first stop had an element of certainty.  But I don't fool myself.

When I was a child I remember slipping under water at my mother's feet.  She surely caught me up quickly, but I was under long enough to know the fear of water, the certainty of its power.  As well-planned as my trip is, I have to expect that there will be uncertainty.  I remember looking up at my mom through that blurry, watery field of vision and knowing that she would rescue me.  I hadn't intended to be sitting at her feet.  I remember a feeling of calmness, a certainty as to the outcome and just a twinge of what if...

Farewell Bend.  I love the irony that my first night was spent at Farewell Bend.  Pioneers on the Oregon Trail left the Snake River at this Bend with the desert behind them going in the opposite direction of my travels.   As I walked the almost deserted park grounds, I mused that this is what retirement is supposed to be like.  I've passed this park on the train watching the flocks of birds' rise, in the car hurrying to get somewhere always thinking that I would love to stop here.  I took my time walking on the first morning of the trip.  It is now my time. 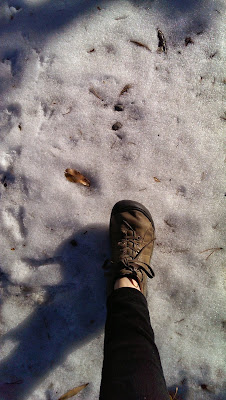 I had intended to leave in September slipping over the Rockies before the snow.  Instead I got snow.  Not much.  I had to look for some that the sun hadn't melted.  I was lucky.  The trip to the other ocean has started well.
Posted by boxoftales at 6:21 AM