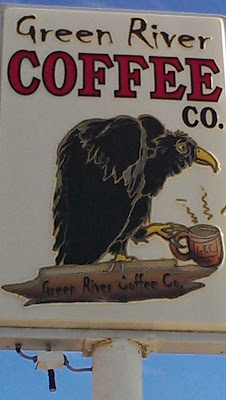 Fueled by Coffee and Desolation

Decaf is for everyday, but traveling begs for the real stuff.  In the 1600's women were banned from entering the newly established coffee houses in England.  If that had been the case last week, I would have had to nap at intervals instead of cruising along at a steady 80 miles per hour, the legal Utah speed limit.

Green River Coffee Co. was actually a destination for me.  Gary had bought a shirt at this coffee shop years ago when we traveled through with our kids. He wore it often bringing back memories of this desert area.  Scavengers abound.  Estimates of the United States crow population places it at a one crow to every thirty humans.  I have spotted crows every day of this trip.  I saw the most crows crossing the desert area surrounding Green River.  The corvidae family including crows, ravens and magpies is one of the most adaptable bird groups.  I recently spotted fourteen crows standing on a school garbage bin in Seattle picking through its contents.  In the desert they were obviously checking for road kill.  The desert and this highway are a scavenger's delight.

I caught the Green River Coffee barista just leaving for lunch.  She stayed open to make me a latte.  The day before my coffee was served with an unimaginable graciousness.  Gramma Gianelli's Bakery in Glenn's Ferry Crossing, Idaho had been closed for more than a half-an-hour when Gramma noticed me peering through her window past her closed sign.  She opened the locked door and inquired as to my wishes.  "Cup of coffee?"  "Sure, I just poured out the old pot of coffee, so I'll make a fresh pot."  I don't know what kind of coffee she used.  I should have asked, as it was delicious.  Small town grace wafted from the cup made from a fresh pot with no more customers in evidence to drink it.

Desolation.  What about Desolation?  What about Rifle?  What about Silt, and Cisco?  What depth of experience named Windy Mesa and Bittercreek?  Watching for the names of small towns and byways kept me awake as well as coffee.  I love this area.  Don't get me wrong about desolation.  The day that I drove this stretch will surely be one of my happiest days of the trip.  I've made this journey by train spotting mountain lion tracks in snow and traveled it with my mom and dad lying in the back window looking up at the stars.  The Bookcliff range is pleasing with it's images of rows and rows of books.  A geological bookshelf that preceded the thought of books.  I love desolation. 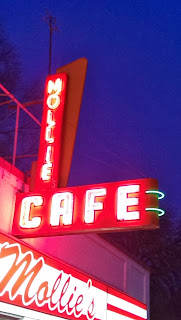 I hate to post without mentioning Mollie's Cafe in another tiny town, Snowville, Idaho.  I pulled in here late one evening looking for one of the advertised "home cooked" meals.  I had a tense drive ahead on the frenzied highways of Salt Lake and wanted a little lift.

Mollie was there!  I noticed an elegantly coiffured, gray-haired lady having an animated conversation at a booth nearby.  Something in her manner bespoke confidence like she owned the place.  Then I noticed on a wall photos of her in her cowgirl outfit and another one of her astride a horse in a group photo.  This was cowboy country.  That explained why the tables were too tall for me.  My elbows were about shoulder height when resting on the table.  These were tables for Mollie's customers.  Those tall cowboys.  This is the service of little towns. 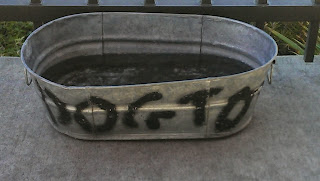 As I sit here in Dog Tooth Coffee in Colorado Springs I'm having a decaf.  It is an ordinary day.  A good day.
Posted by boxoftales at 9:37 AM