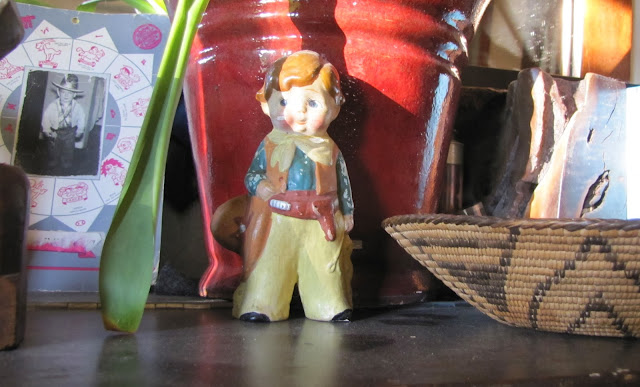 Cowboys and Indians were big in the 1950's.  That's Gary in the photo in his cowboy outfit as a three or four-year old.  Our fathers both read Louis L'Amour westerns; our families listened to Sons of the Pioneers, and watched Zorro and John Wayne movies.  My mom kept bananas in that Indian basket on the right.  We knew vaguely that she had gotten it on a trip to New Mexico in the 1930's.  I grew up with an affinity for the western landscape, artifacts and tales. 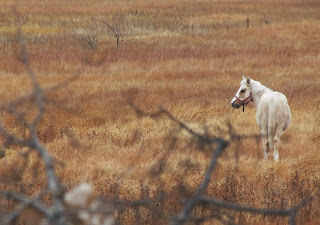 Horses were central to the cowboy mystic.  My family didn't own a horse.  My mom and dad's claim to horse fame was the time they were waiting for an elevator in Reno. When the doors opened the actor, Roy Rogers with his horse, Silver, strolled out of the elevator.  Whoa!

As my sister and I travel though New Mexico this week, one can't miss the horse trailers and coyote-style fence corrals.  This horse was grazing in the Chamas Valley near the home of Georgia O'Keefe at Abiquiu.  I don't recall her painting any pictures of horses. 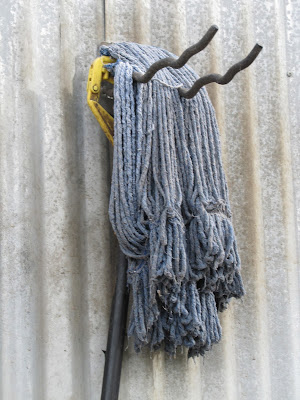 Ha ha!  I come all the way to New Mexico to find out about Indian baskets, pueblo architecture and those gorgeous hills, and one of the first photos that I take is of a mop head.  I just couldn't resist.  Blame this photo on pup.  On our first stop in Taos we ate at Orlando's Restaurant just outside of town.  Pup as usual needed to do a little scouting, so we sauntered around the back and encountered this native species.  With cows and horses on the mind, he just looked familiar.  He actually reminded me of the stick horses that my childhood friend, Diana, and I would ride around our backyards.  Diana eventually got a horse, but I remained horseless.

I learned that Georgia O'Keefe moved into her home at Abiquiu when she was 62 years old.  She lived there the next 35 years.  Being in my 60's as well, I can't imagine taking up horseback riding... even if I would love to do so.  Georgia instead focused on painting the horse skulls.  I think she would have painted something extraordinary even from my mop head!

Visiting O'Keefe's home was on my wish list.  Today we toured her main home.  One cannot take photos, so the picture below was taken from the website.  The rooms are unimaginably simple and breathtaking.  Her peaceful studio with its wall of mesa views is a room that one can hardly leave.  When O'Keefe first saw this home it was in ruins.  It took her ten years to convince the Catholic Church to sell her the property.  She proceeded to rebuild the house and layout extensive gardens.  She contributed  money to build a community center outside her walled garden.  It was a gift to the church and families in the pueblo. Later she gave more money to build an elementary school for the area.  I liked hearing of her generosity.
The valley below her home is filled with cottonwood and Russian olive trees.  These trees likely existed when she was painting.  I was glad that we were traveling in late fall. 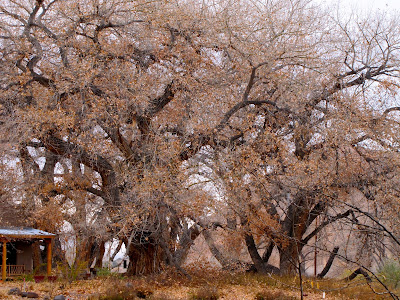 The southwest would not be near so impressive were it not for the Indian influence.  The pueblo architecture, basket weaving and jewelry make this area unique.  I had not visited Taos before.  We did not stay long or I would have tried to get photos down some of the lanes lined with adobe houses.  The following are just a sampling of some of my favorite snapshots.  The sky was filled with rolling clouds, not much sunlight and yet the colors used in the adobe and in window trim were still striking. 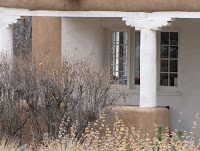 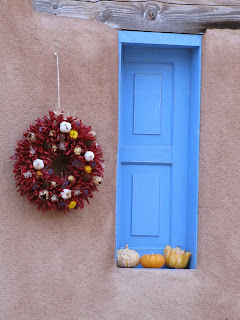 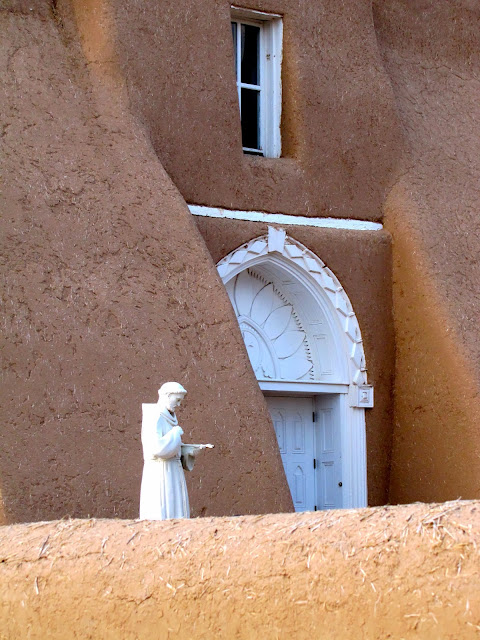 The photos are such exquisite tiny portraits.  Imagine turning 360 degrees and seeing this beauty everywhere.  Put Taos on your list.