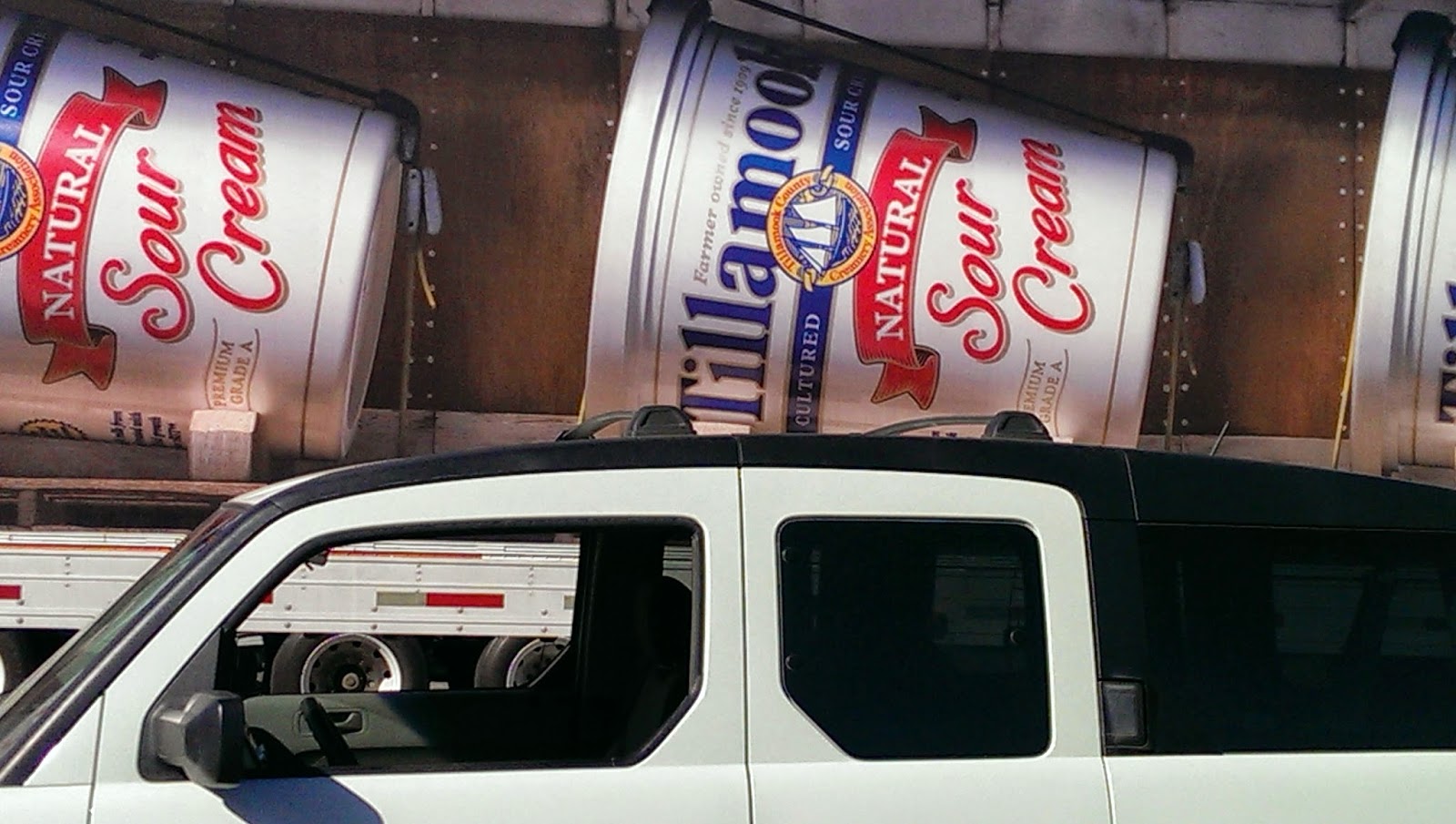 I am off to the land of dairy, big trees and seafood along the coast of California and Oregon.  Carol is pulling her little teardrop for her “tent” and I get to sleep in the Element.  It's fun to pull up by the big trucks and motor homes at rest stops.  We always get attention.  Twice the motor home owners have offered to trade straight across.  All parties laugh contemplating the possibilities. 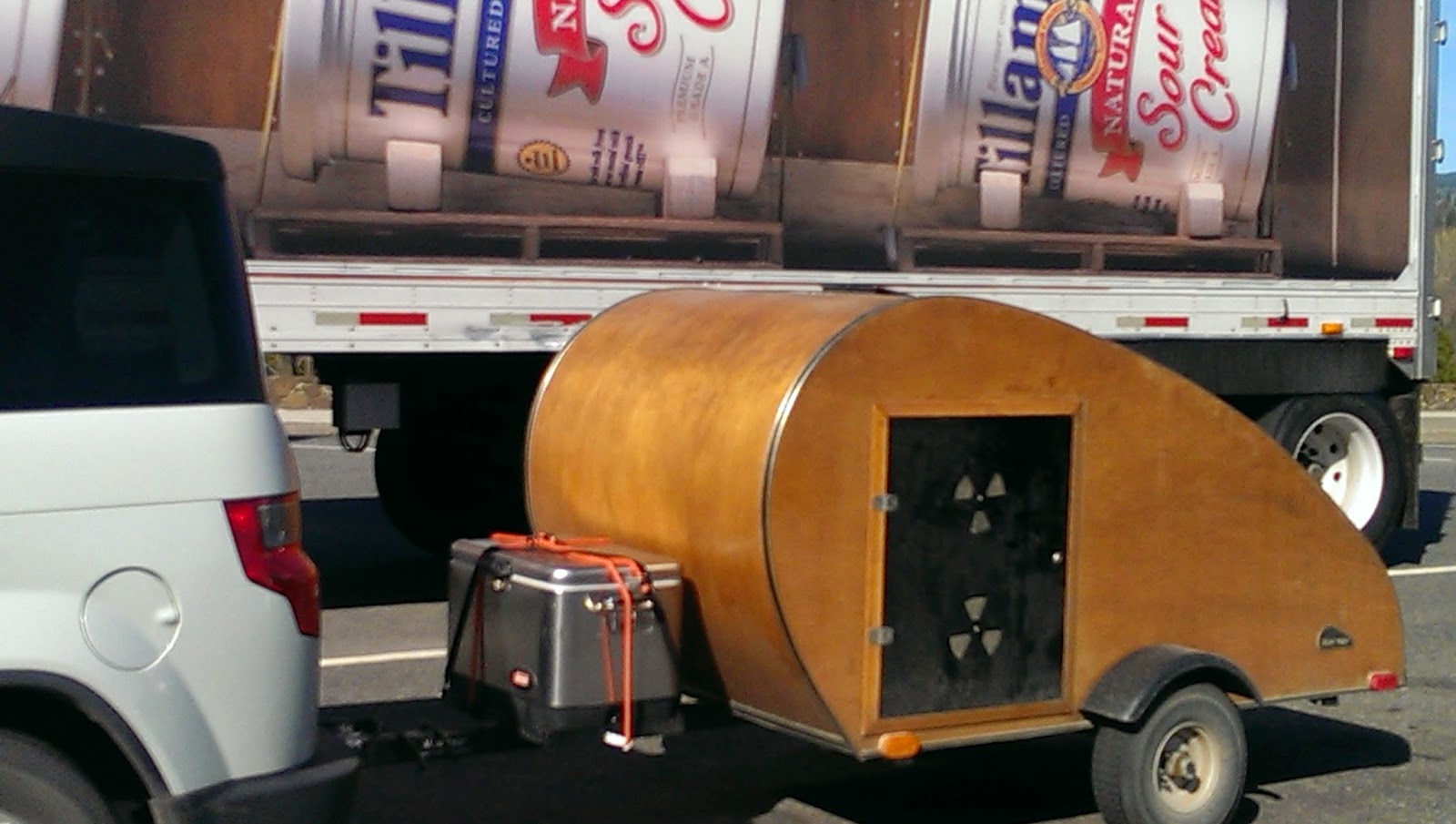 The first night we camped in the woods at Silver Falls State Park outside of Salem.  Carol, mind you, has been trained as a cook.  Camping with her is like finding a gourmet restaurant in the woods. She had prepared a dinner ahead of time- a delicious homemade beef curry with potatoes.  Carol has come up with an ingenious way of keeping food cold for a long time.  She freezes a case of water bottles and any food for the meals ahead all stored in a cooler.  We defrost a couple of bottles a day for drinking, while the remaining keep everything cold. The food warmed us up enough to complete our camp preparation by the light of a full moon.  The temperature began heading into the teens.

In the photo below, I appeared to be going to the mines instead of the sleeping bag to read the book, "Rats".  The author of the book spent a year observing rats in alleyways in New York city.  A chilling read for a chilly read. 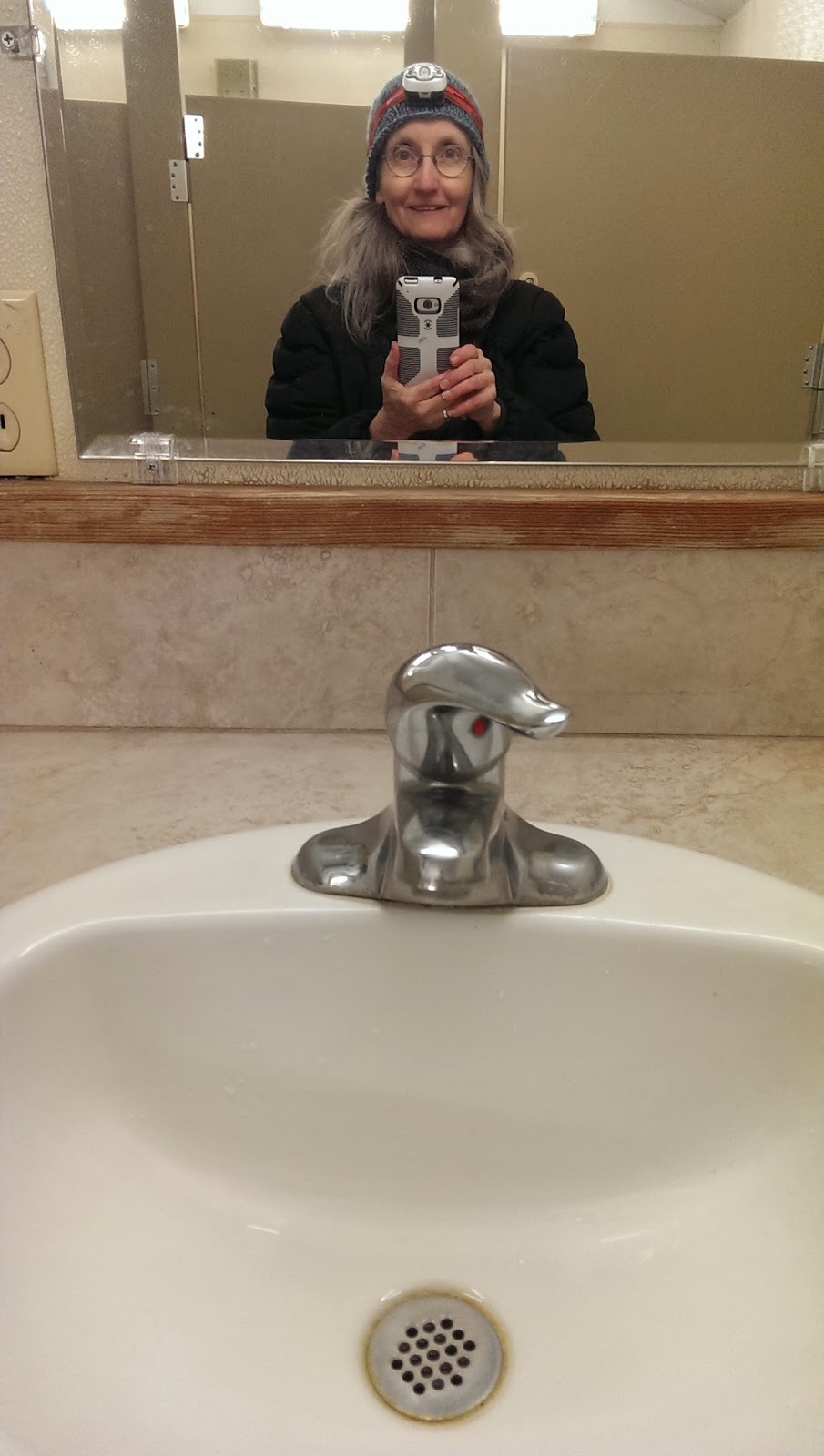 By morning there was thick frost everywhere including on the cutting board, which we had left outside inadvertently.  Even Carol agreed to have some of my favorite hot cocoa with cayenne pepper to quick start the day. 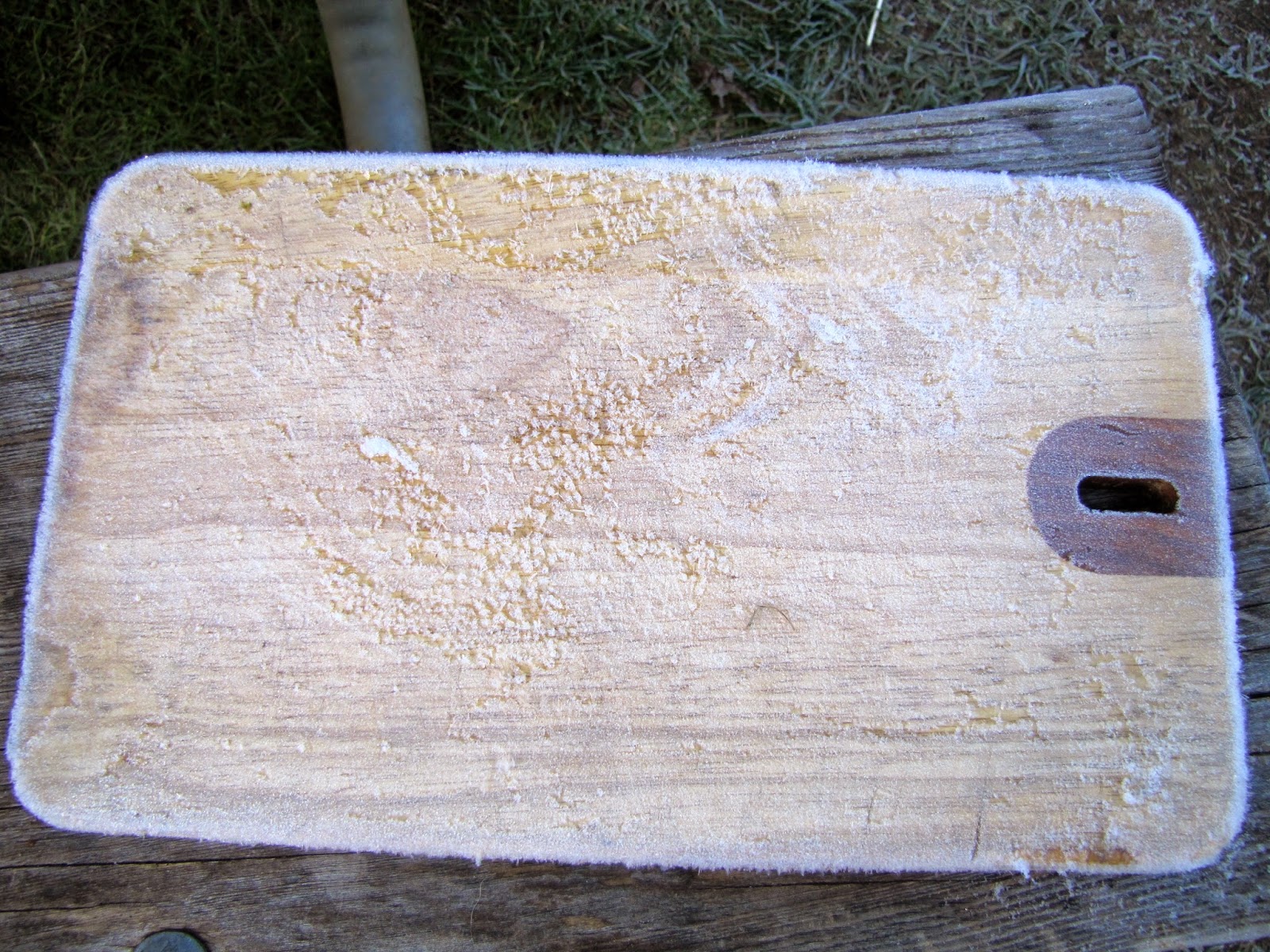 This is a blog really about food. Knowing that I was traveling with a cook, I tried to contribute something worthy of her standards.  I had fixed Hills ham on sourdough with tomatoes and lettuce for lunch the day before, but Carol always topped me.  For her next dinner we had hot homemade squash soup and then we had yogurt, crumbled blackberry scone and blueberries for breakfast.  We realized early on in the trip that we only had one fork, one knife and one spoon between us.  We had lost the spoon by the second breakfast, so here is the yogurt that Carol ate with a knife.  It's possible! 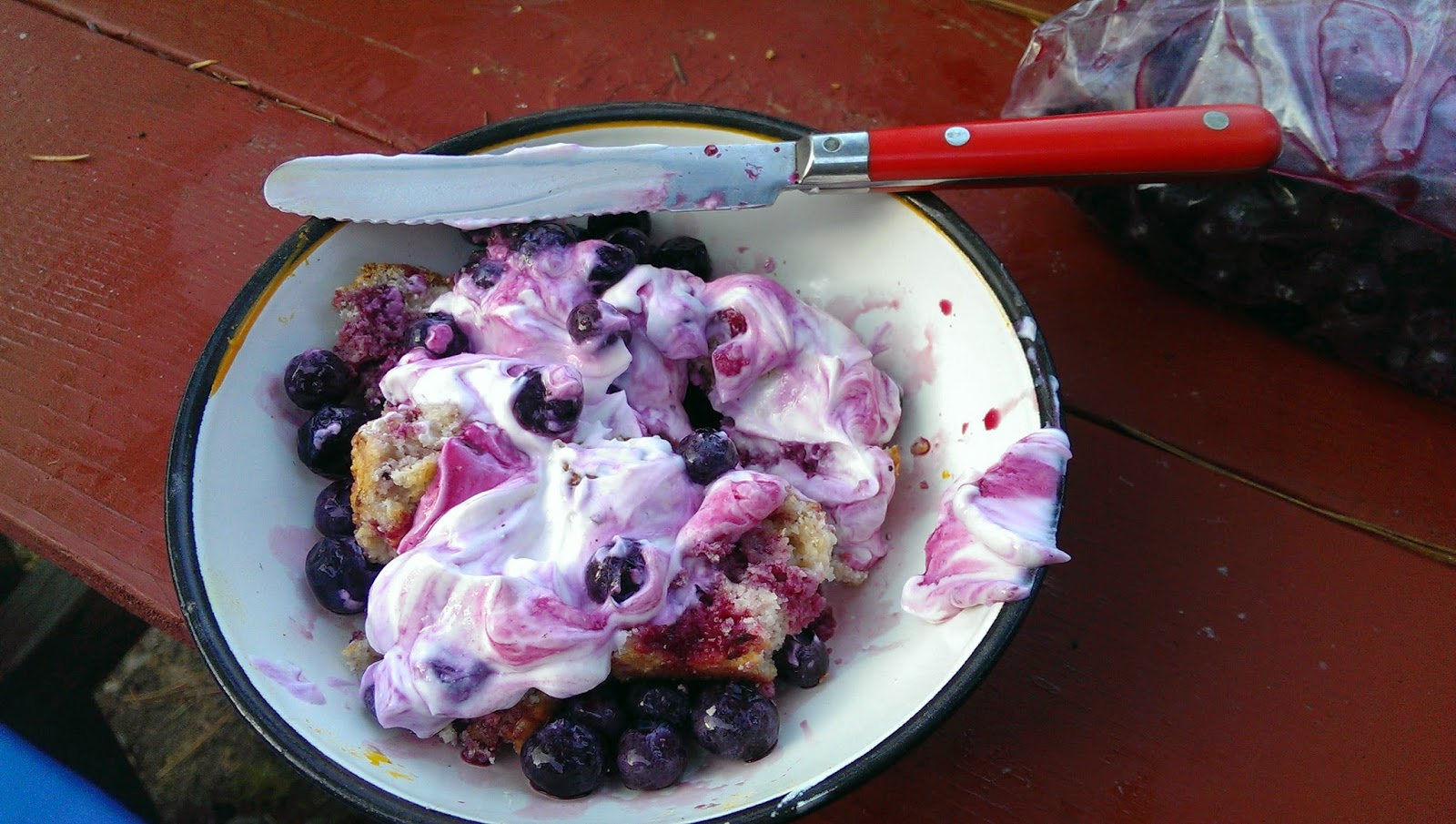 Neither of us had made extensive plans for where we were going to camp.  We had started out late in the morning on Wednesday waiting for the frost to lift with the temperature in the teens.   Thinking that we might make Crescent City and a national campground by nightfall, we didn't look further.  We made one stop to buy seeds from Territorial Seed Company in the charming city of Cottage Grove and to have sandwiches of avocados, sliced eggs and tomatoes alongside a little river.
Nightfall approaching we decided to try the next closest state campground, that proved to be closed for the winter.  Fortunately we had passed a little private camp with cottages.  They were "closed", but willing to let us use a site for $5... no water, no facilities.  We chose the most beautiful site alongside of a river and had the grounds to ourselves.  In the morning the upturned fire pits provided photo frames for the dogs, Lucky and Lizzie. 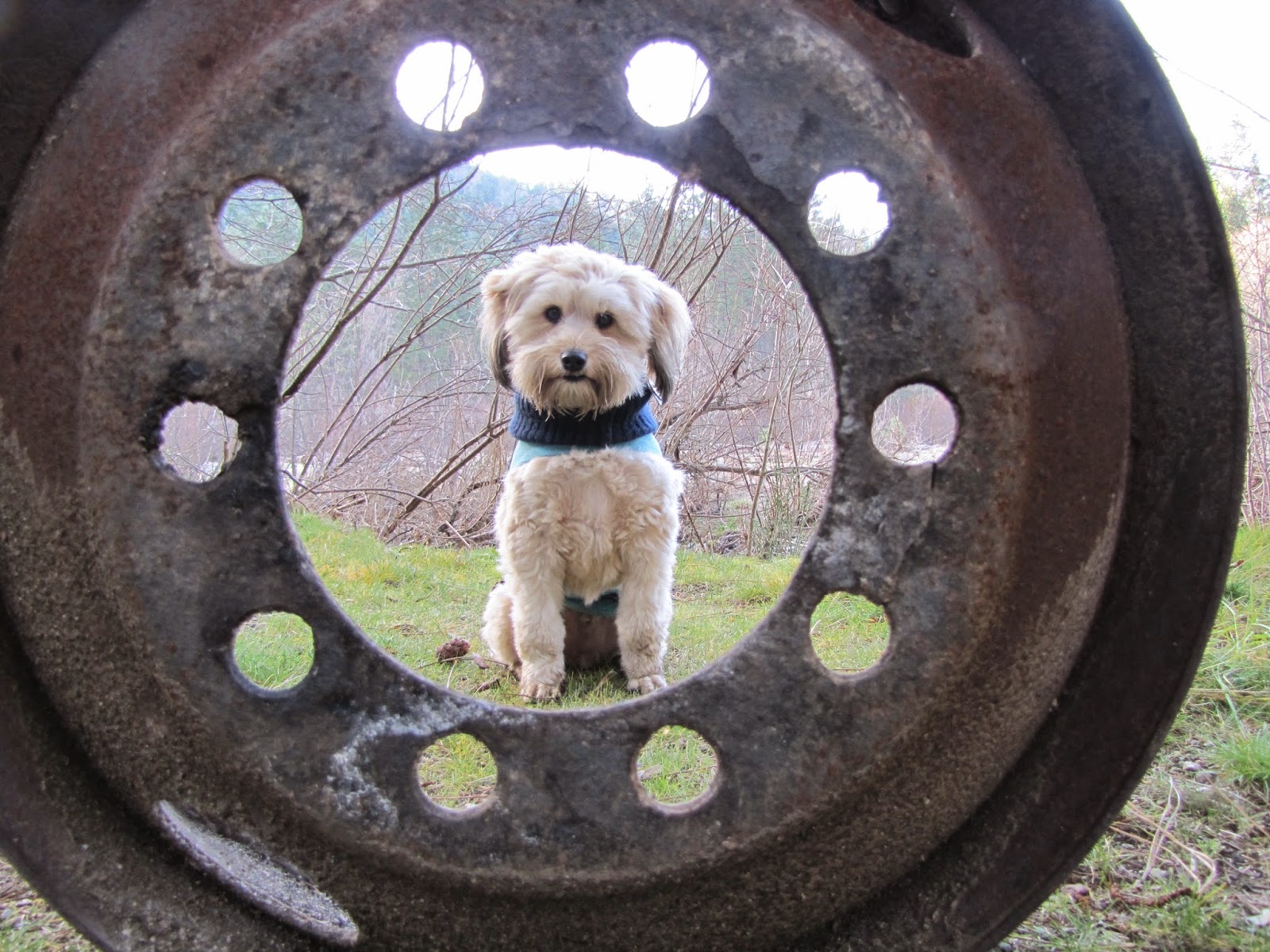 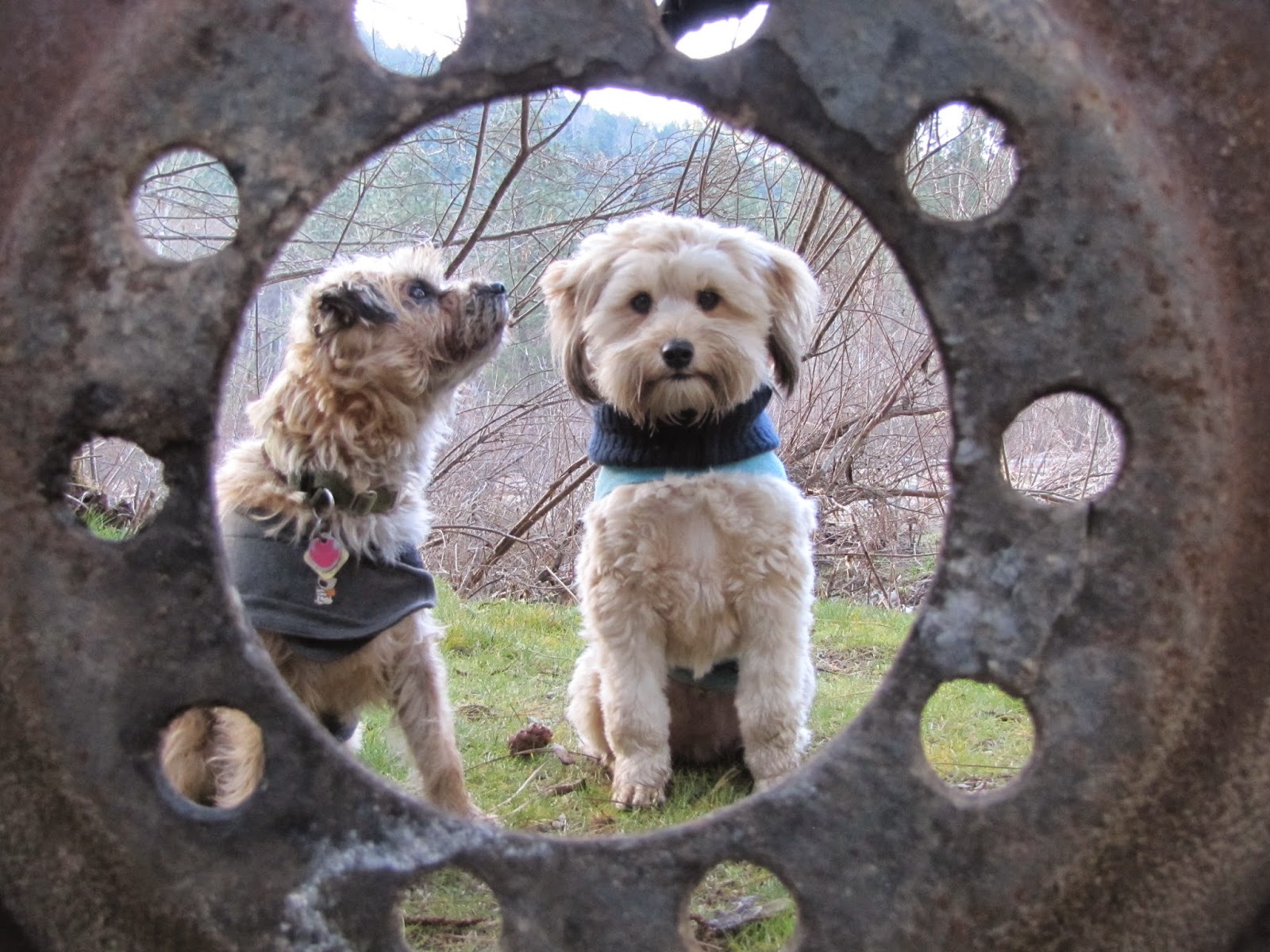 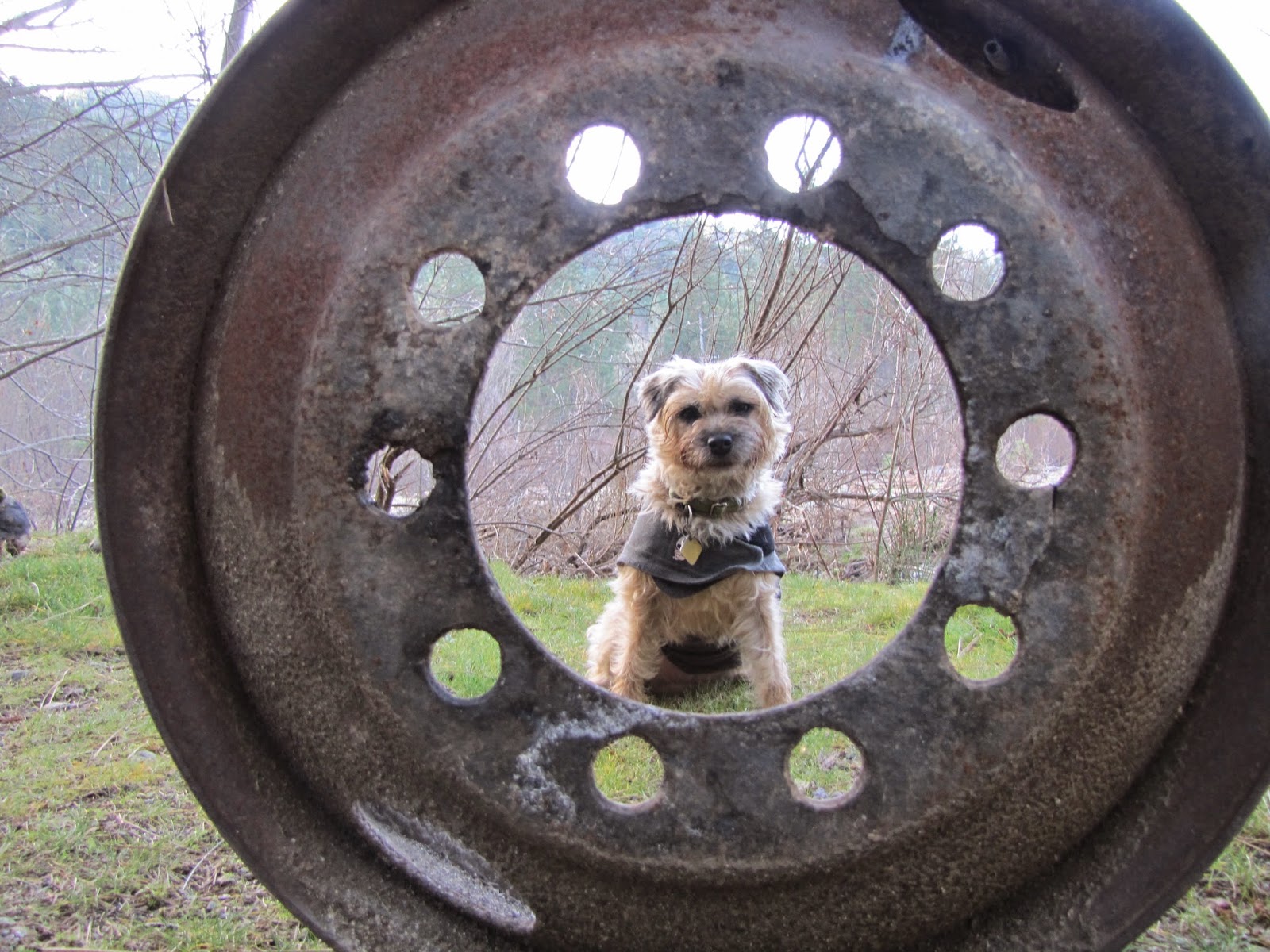 When we pulled up at the beach in Crescent City there were whales blowing and seals snorting.  Carol and I roamed with the dogs and then had just an appetizer of prawns at the Chart Room.  Are you planning your trip to the seaside yet? 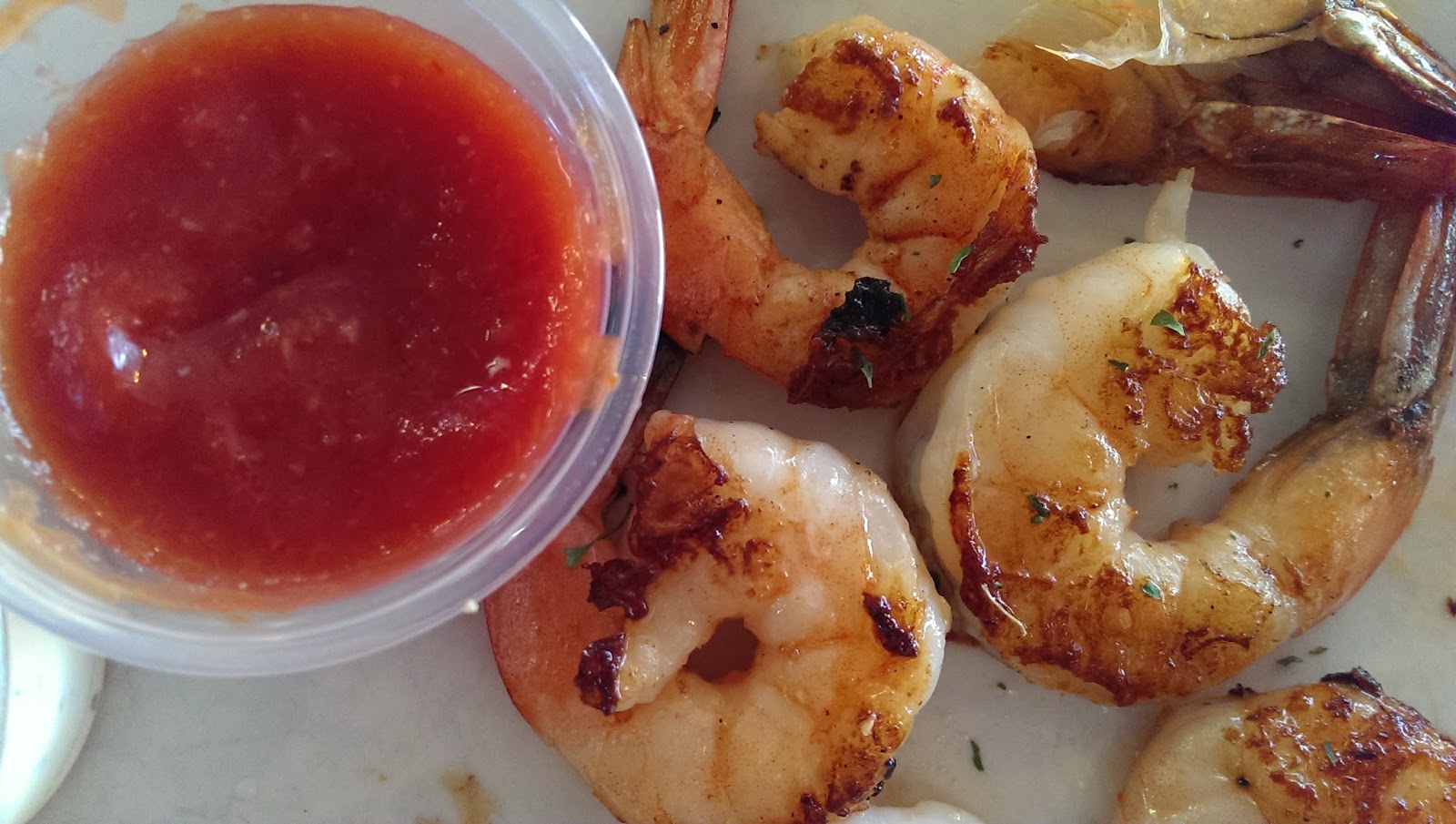 We continued eating.  The next two dinners that we had brought with us were ham, roasted Brussels sprouts and steamed potatoes with herbs prepared by myself and then fabulous chili made by Carol.  We ate these two meals with our good friends in Crescent City.

Our camp was on another river with a little meadow in front of us. We napped by the river and took some photos of the big trees.  Hikes in the woods are planned.
Here is Carol by the biggest tree in our camping area. 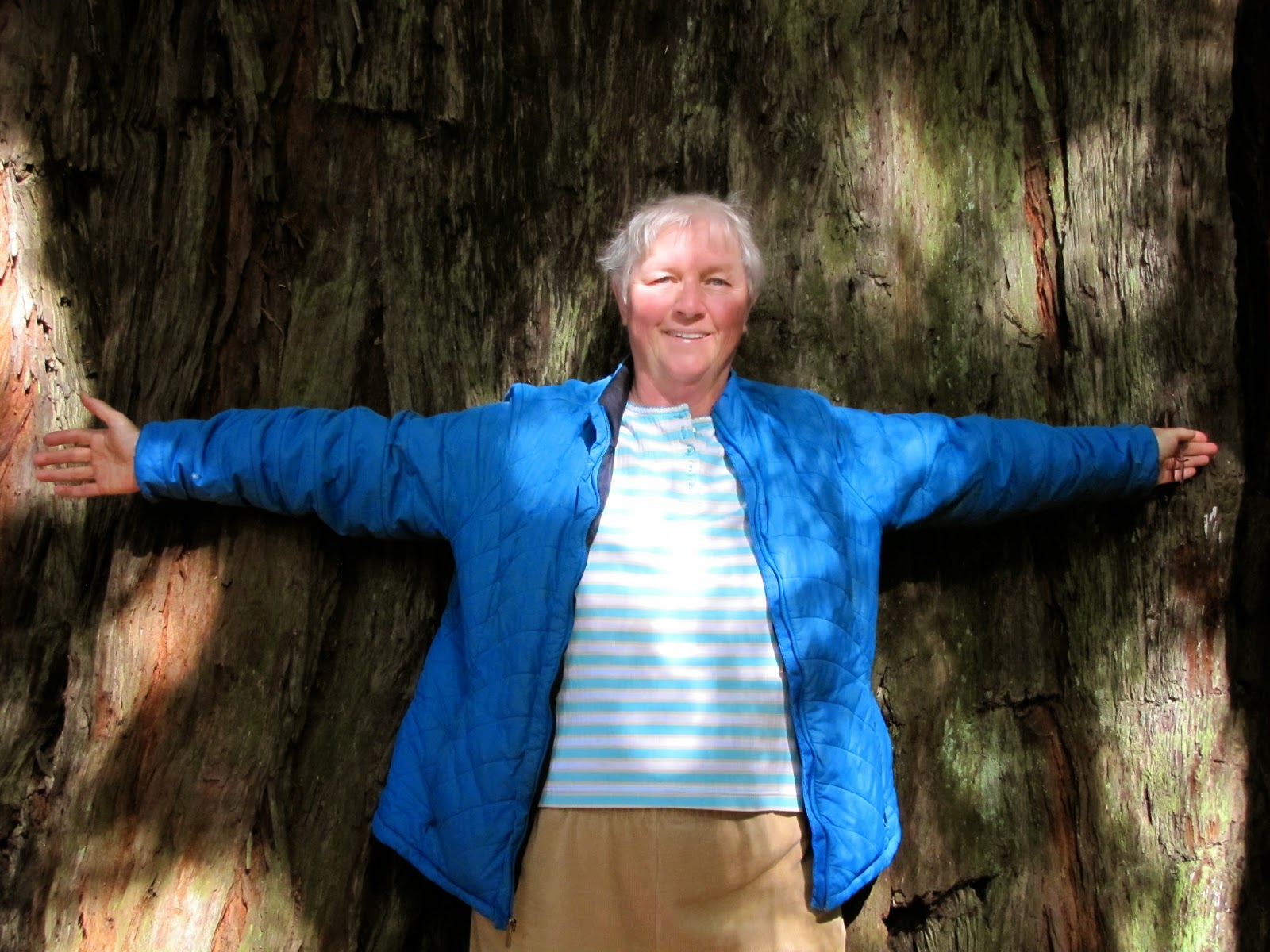 Another day we took a foray up the Smith River and spotted mergansers in the turquoise water. 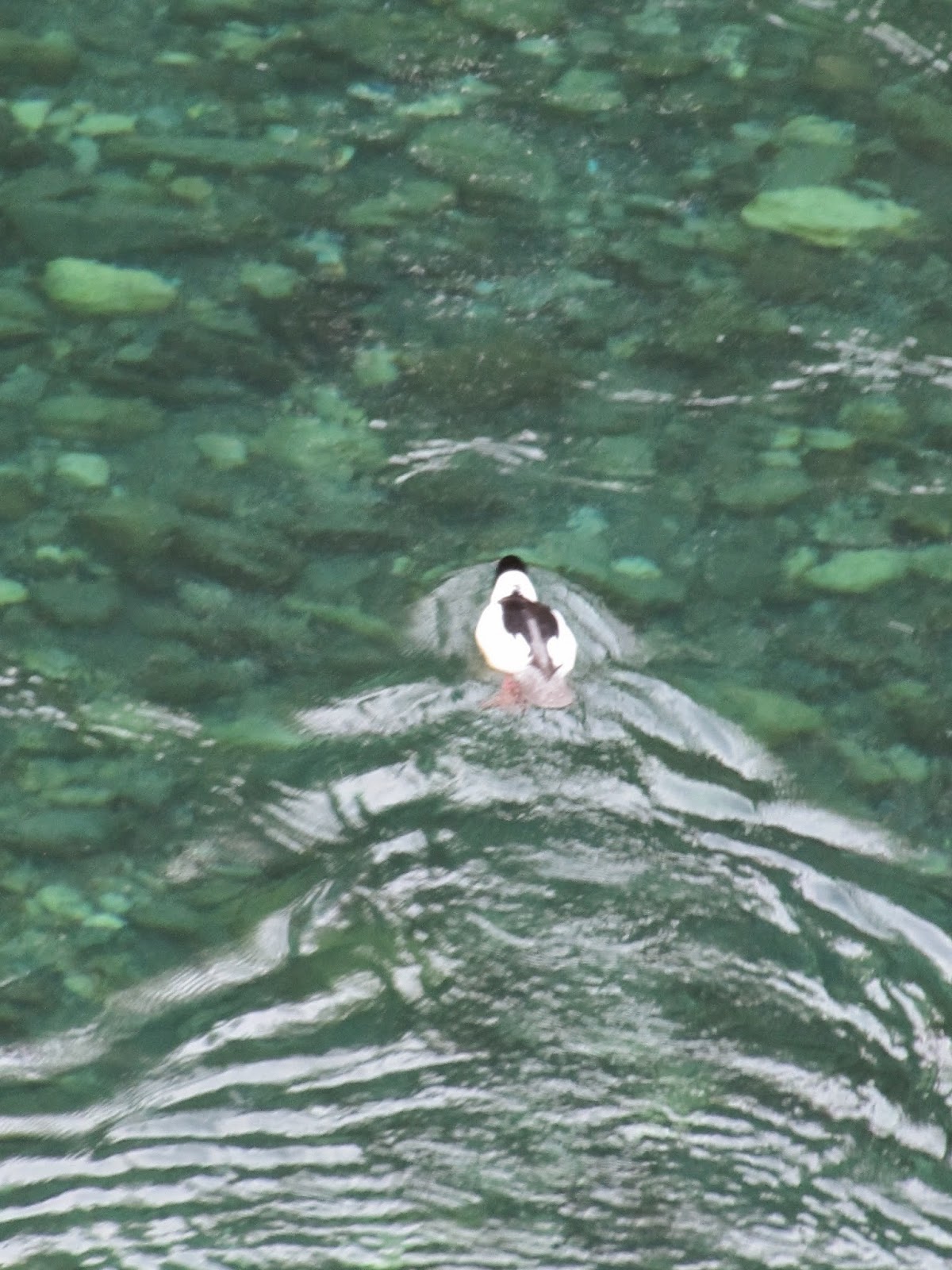 More seafood was on the menu, so before heading to the beach to search for agates and take a nap in the sun, we got crab sandwiches and coleslaw.  The sea lions at the end of the dock barked at us as though to say, "We agree seafood is the best!"  For those landlubbers the sign below alerted us to the fact that we needed to be careful.  Water nearby! 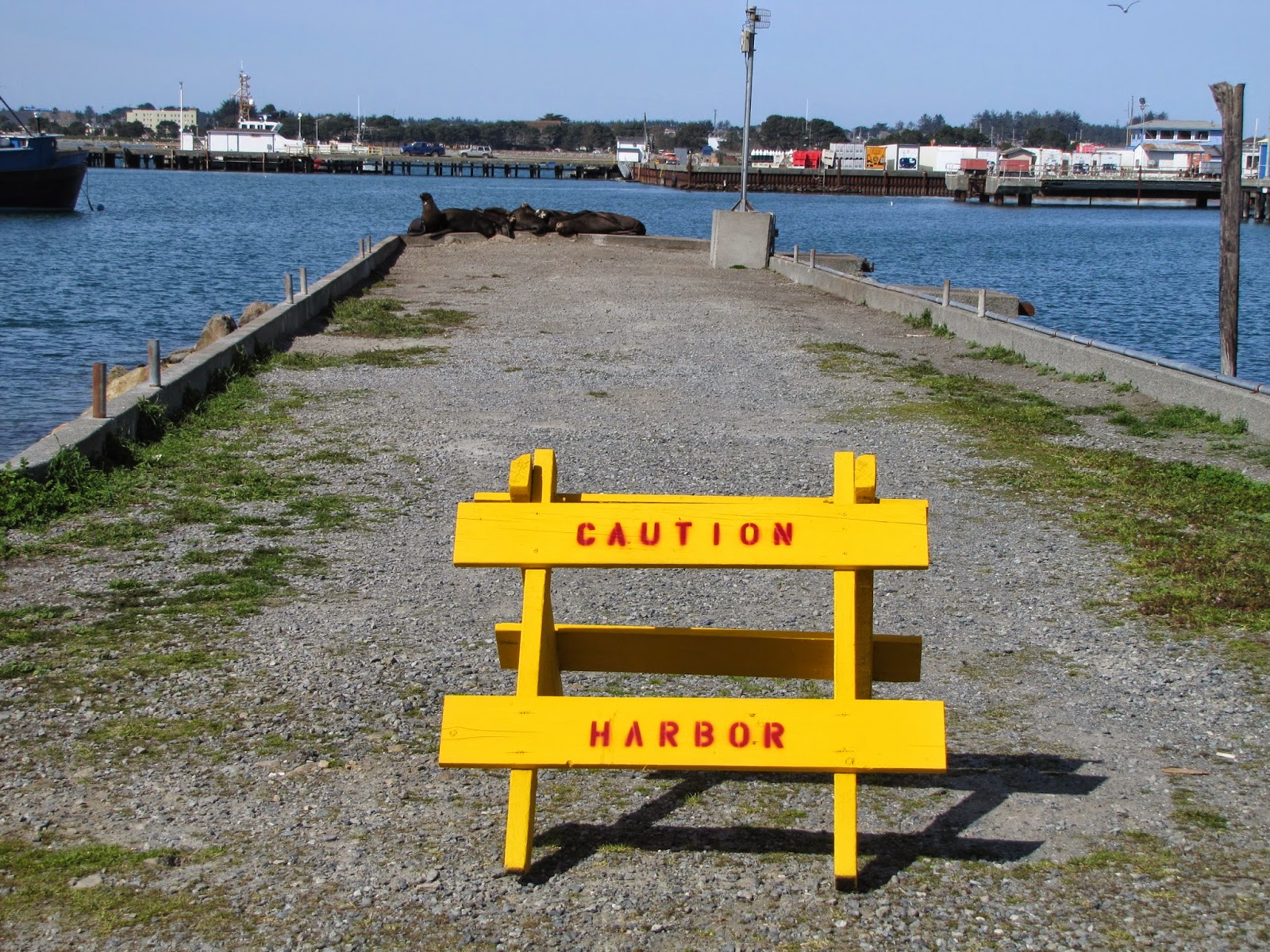 Today off for more adventures.  And good food!
Posted by boxoftales at 10:32 AM