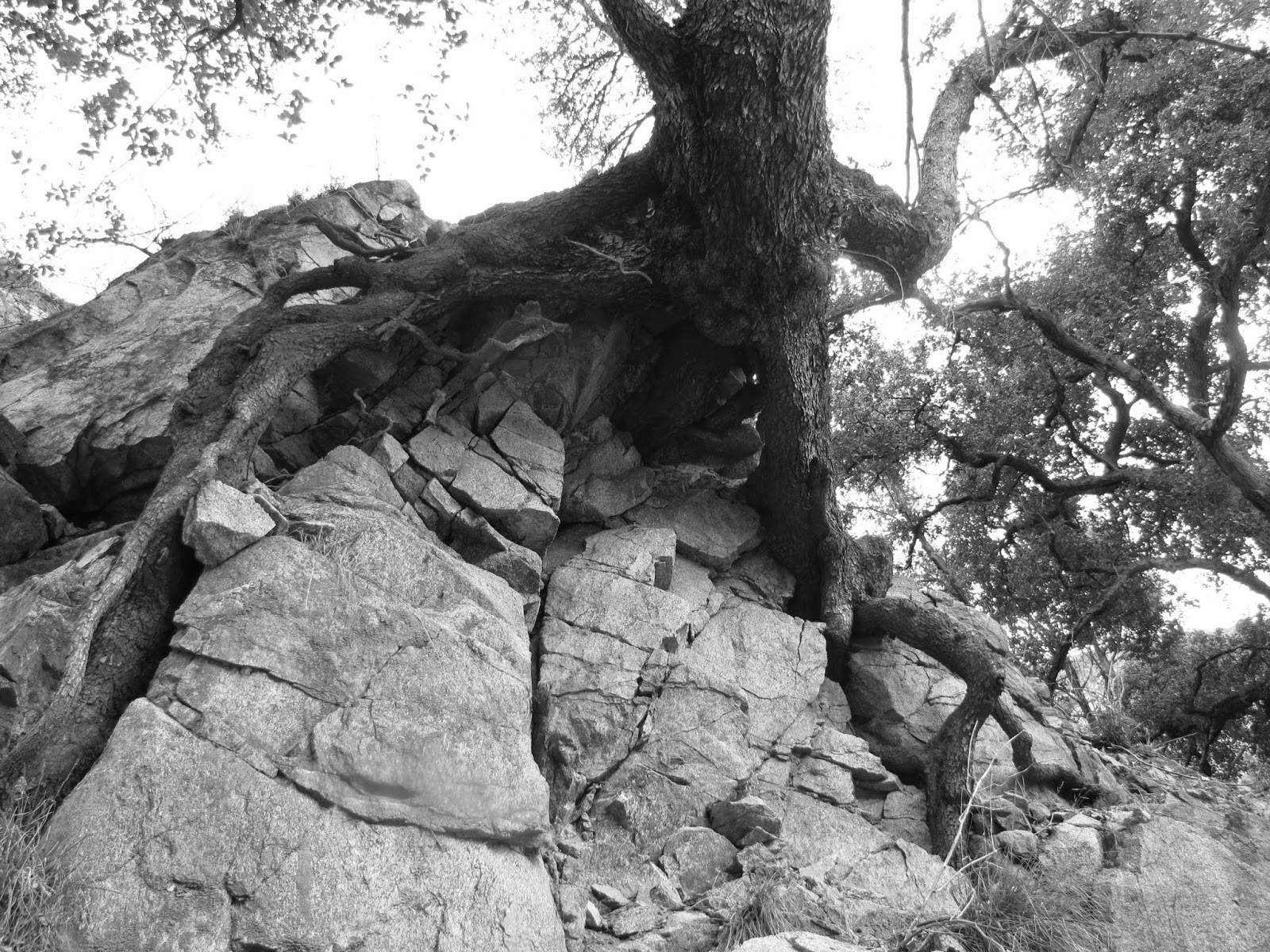 (A conversation overheard between a tree and a rock in a chaparral canyon in Los Angeles.)

“Did you ever hear the short story by Ursula LeGuin, The Direction of the Road? It’s about looming, about how trees learn how to loom up when animals or humans or cars approach.  Then the tree has to reverse its direction, diminishing its size as the creatures or vehicles move away again.”

“Maybe, I think that I’ve heard the end of that story.  An oak tree had to loom up quickly as a speeding car approached.  At the last moment the car swerved crashing into the tree leaving it to remain in a forever-loomed position in the eyes of the driver and the passengers.”

“No, that was the end of the story?  I never heard the end.  It’s so sad.  No one expects me to loom forever.  One look at my root system clinging to these unstable rocks and they’d know that my days of looming are numbered.”

“Hey, shush.  Here comes a hiker with a big dog.  Hope he doesn’t pee on my chin.  I hate it when they do that.  I’m beginning to smell like a French urinal.” 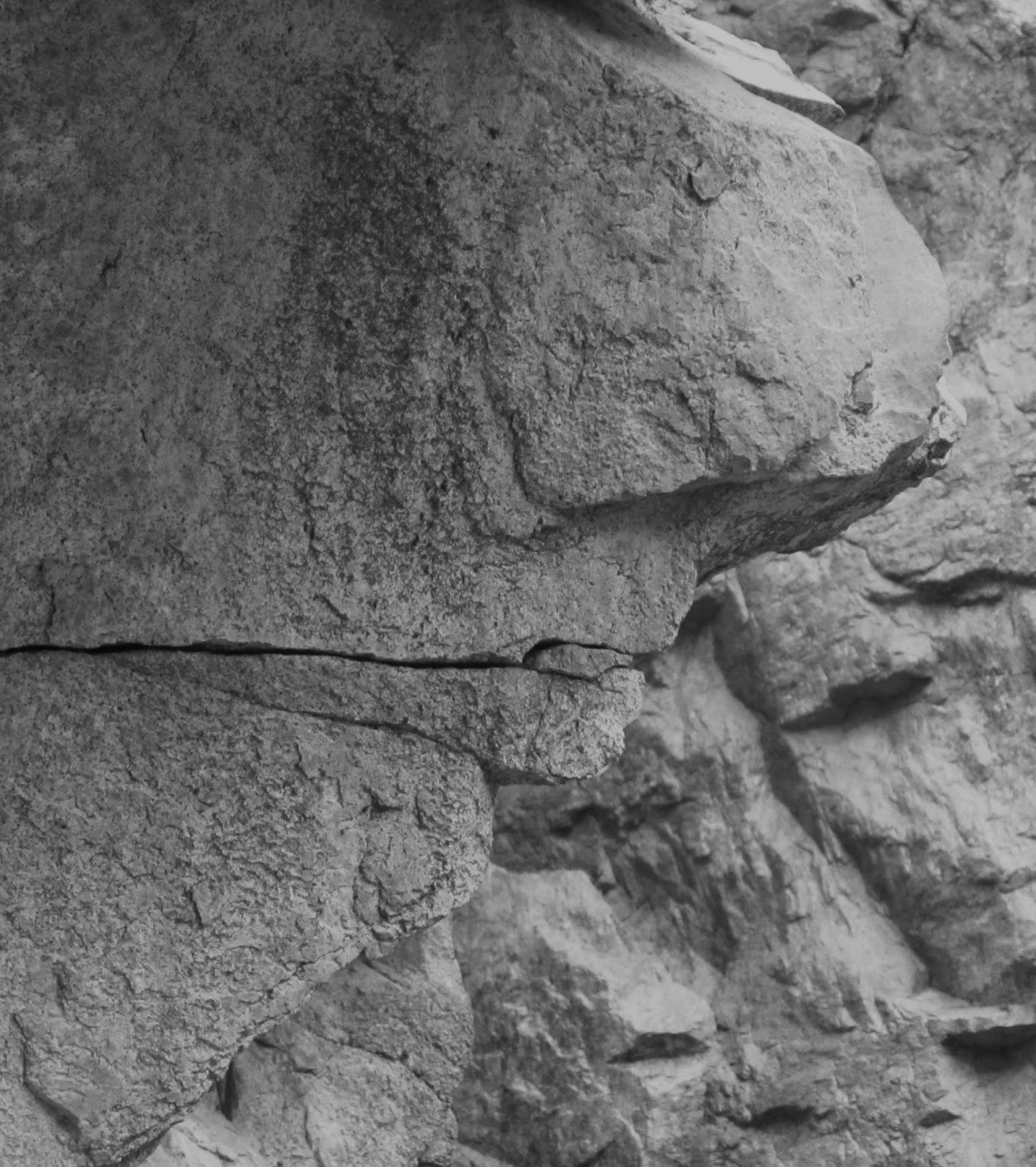 “Sorry, buddy, he caught you fair and square.  How do you know about French urinals?”

“ I have a distant Italian cousin, he’s Carrera marble.  Hoity-toity, but he’s in my family, so I have to be nice.  One chunk of him was made into a urinal on a street corner in Paris, way back.  It’s still in use.  He mentioned the smell, but downplayed it because of the great secrets he could hear in the urinal.  Guys talk, you know, at the urinals.”

“You rocks, you know everything.  Being the most advanced intelligence on earth must be trying for rocks at times.  Humans, still thinking that they are the smartest, even though their role is just to move you rocks around, hardly appreciate you.  And now the last many years with people so preoccupied with their cell phones, good thing rocks have intelligence and patience.”

“I’ve been meaning to ask you about those cell phones.  They do occupy so many folks these days, even kids.  They’re cellular, so they’re like you.  Alive, like trees, right?”

“Cellular…  Yeah, I hadn’t thought about that connection.  Maybe humans are evolving.  Could they be storing their brain cells in their cell phones?”

“You have a solid idea there.  For a tree, you’re quite savvy.  Those scientists from that place down the canyon, Jet Propulsion Laboratories, maybe they came up with the idea.  They began carrying those phones first.  Brainy folks.  You were younger then, but do you remember when us rocks had those folks fly to the moon and bring back our relatives, the moon rocks, so that we could meet them?  Potentially the endeavor of designing those complex engines enlarged their brains so much, that they had to start storing their extra mental cells somewhere.”

“Shush again.  I can see some more hikers coming up the trail.  One of them is ahead of the other by about 40 feet.”

“Hello, Joe, I don’t know about you, but I’m getting winded.  We could keep going just a little ways.  We’re almost at that precariously balanced tree and the rock with the Jimmy Durante nose.  How about we go to the next bench. (A pause.)  O.K. Good.  You got water?  I forgot mine.  See you soon.”

“Hey tree, are thinking what I’m thinking?  Those passing guys were talking to each other on their cell phones even though they were within voice range.  I see this occasionally now and I am beginning to understand that this is evolution at work.  The humans are loosing the capacity to talk to each other or even think in their heads, so they have to talk to their brain in the phone and the brains talk to each other.”

“That explains the selfies, too.  Humans must be loosing their eyesight, so they are taking photos of themselves.  Then they won’t forget what they look like. Their images will be stored in their cellular brain.”

“Hmmm.  That teenager, who said, ‘Oh you, asinine cell phone,’ didn’t mean that his cell phone was stupid.  I think we misunderstood the meaning.  Cell phones are smart.  He must have meant that his cellular phone was the kind that fit in the back pocket.  An asinine cellular.”

Post Script:
The engineers, Douglas H. Ring and W. Rae Young at Bell Labs, selected the word cellular, as in cellular phone.  They had made a diagram of a network of wireless phone towers.  They chose the term cellular to describe its appearance when each tower’s coverage map took the shape of a biological cell.

Credit to Ursula Le Guin for her looming idea and to another anonymous author of a short story (whose name I can’t remember) about rocks being the most intelligent life on earth.

Posted by boxoftales at 2:54 PM