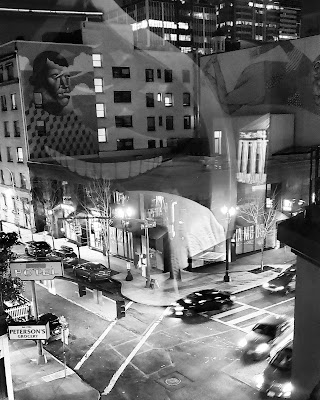 The city of Portland dressed in black tails and white ties for our date on the town. The grand staircase: the rooftops of shops, old hotels and newer skyscrapers, stepped up to a moon. The playlist beat to the rhythm of streetlights, the spotlights headlights. Murals provided a façade of other guests, slightly blurred as if in a room swirling with cigarette smoke.
In front of me on the inside window ledge sat two cardboard boxes containing the evening’s dinner. The menu included three meatballs in the left-hand box and a spicy kale and a roasted cauliflower entre in the righthand one. The spread was catered by a friendly neighborhood grocery store named Whole Foods.
My front row seat was in a room painted ceiling and all in midnight blue with gold highlights, its dimness lit romantically by table lamps wearing elegant Victorian shades. The accommodation multitasked with a sink in one corner, an antique—some might just call old—wooden chair that I had pulled up to the window, and a queen-sized bed on which lay two thick bathrobes, the better to visit the bathrooms down the hall.
Snow on Snoqualmie Pass made me detour south through Portland, Oregon. Taking advantage of the circumstance, I booked a night at the Crystal Palace Hotel, a block from Powell’s bookstore. Although I had promised myself twelve hours at Powell’s, their hours had been shortened due to Covid, so I stayed until their new closing time at six o’clock and did “the night on the town” from my room, practicing downtown living.
When I occasionally think it would be fun to live in a city in a classic older hotel or apartment, I do so from a position of privilege.

A fuller view from my window, without the romance of being dressed in black and white, put another hotel up for consideration. The Georgiana advertises “reasonable rates.” It’s amenities included street level shopping at a sex shop, Peterson’s Grocery with most of its windows boarded over, and two bars and a nightclub A guest review noted that you were required to sign a waiver stating you were aware of the amenities, particularly the nightclub and bars. After signing, you would not get a refund no matter the complaint.

Sex shop aside, it was the blue window that eventually placed some perspective on living in a downtown hotel. I noticed an occasional burst of light coming from the upper corner window. A young man wearing a yellow ski hat sat on a twin bed smoking a bong. The hat, I suppose, serving as a nightcap in the cool room. The bong’s intermittent white flashes illuminated his stark surroundings. The euphoria or the stupor that followed his inhales must have helped irradicate the young man’s sense of failure. A hotel with “reasonable rates” has connotations. None good.

In the morning, I pulled aside the curtains to let in the eastern light and checked the view again. When your refrigerator is winter and the shelves are the window ledges, I am sure that you worry about spring’s arrival and even maybe global warming. And so you take another toke on your bong. Summer’s arrival worse. Living on upper floors of an old hotel, the window has to be open to get cooler air, but the opening invites the company of street noise: engines, garbage trucks, sirens, and the shouts or mutterings of drunks.
Other than the brief noise of the joviality of other guests arriving on my floor, my night had been blissfully quiet, buffered by carpeting, insulated walls, and the thick door of my classier hotel.

Early in the morning around, I walked to the Louisiana-style donut shop, Nola’s, for lemon poppyseed and chocolate beignets. The expense of two donuts would have bought a loaf of bread and a jar of peanut butter at the Peterson’s grocery.

View of my hotel from the evening before.
I ate the beignets downstairs at the hotel accompanied by a mug of free coffee from the lobby.
I would still like to spend a month or so in a downtown Portland lodging. I envision long walks, good restaurants, and perhaps attending a few art or writer’s events along with those twelve hours at Powell’s. The reality of living in a big city would be a lark for me, but the inequities in downtown housing—so obvious during my one night in a hotel—is for many not the fantasy of a town dressed in black tails and white ties.
Posted by boxoftales at 10:01 AM