Quonset Huts and Why They Evoke Nostalgia 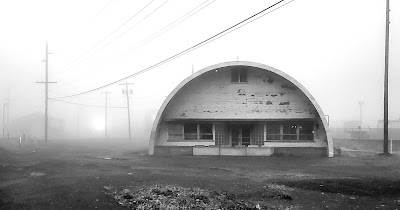 I frequently pass this Quonset hut, a WWII relic, where it sits on the edge of a sketchy industrial area on the edge of town. It looks lost and lonely most days, but none more so than on a foggy one. Every time I notice the hut, I think of my dad and his long ago military service. 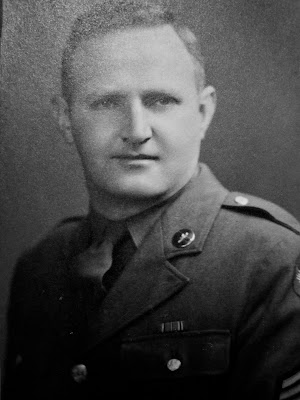 I've tried taking the hut's photo before, but I couldn't seem to catch its sense of uselessness, illustrating I hope the passing of the necessity for buildings constructed for purposes of war.

I admit to a certain nostalgia about WWII. This would seem to be in conflict with my aversion to military endeavors, but after some thought, I have concluded that my feelings of nostaglia, a word derived from two Greek words: return home and pain, has to do with my appreciation for a time when a frightening challenge was met with competence and some measure of grace. 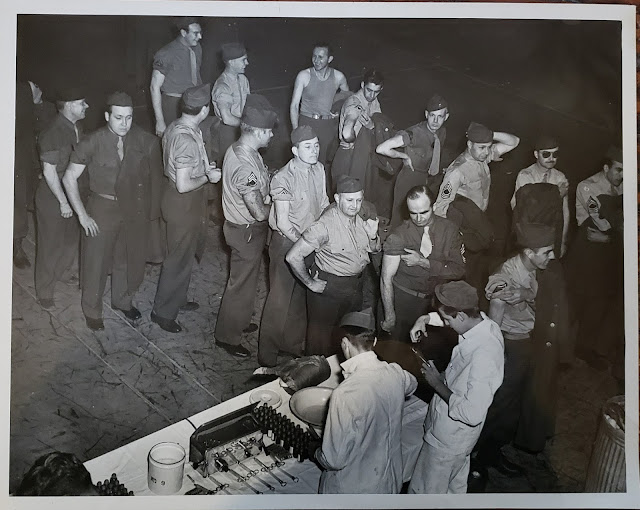 My father (third in line) with his sleeve rolled up, his jacket casually tossed over his shoulder, and a slight  smile on his face conveys the spirit with which I speak. I have no doubt that my father would have preferred to continue his schooling to be a forest ranger, but within two weeks of Pearl Harbor he enlisted in the Army-Air Force and was sent to England for three years. In almost all of the photos of my dad during the war—a night with fellow Coloradan soldiers at a U.S.O. event, sitting on a bench with a WAC by some river, and standing in a heavy overcoat in front of the Louve in Paris—he is smiling. I know that he experienced and saw things of which he did not speak and certainly would not have left a smile on his face; and for me not seeing these things likely skews my impression of the War.

(This photo reminds me that this is the spirit with which I wish all Americans were approaching getting vaccinated for Covid-19. Just do it.)

I am reading a book about President John Adams and in it is mentioned the fact that silverware was melted to make lead bullets during the Revolutionary War. In both the First and the Second World Wars the practice was repeated with all kinds of metal. Somewhere in this world there are silverware and sewing machines and coins and bumpers all which contain traces of metal once used in implements or accessories of war and previously might have been silverware. When I notice a Quonset hut, a steel-sided structure, I know that it speaks of sacrifice of something gathered and given up for the cause of winning a war. Consider how lovely it will be when the sole purpose of recycling and repurposing will be to take something made in peace time and use it to make the world a better and more equitable place. When we skip the intermittant stage of recycling to make war implements.

During WWII the Lionel toy company switched from making toy trains to making compasses for warships and the Mattatuck Manufacturing Company switched from making its stock upholstery tacks to making  cartridge clips. This is the stuff that I admire. The making of the Quonset huts in huge quantities falls into the same category. The unified effort of ordinary people, sustained and focused, is what bolsters my feelings of nostalgia for the war in which my father fought.

I love Quonset huts for the elegance of their swooping curve, an imitation of a rolling hill. I love that they were repurposed after the war as temporary houses, as roadside cafes, and mostly as farm sheds. I love that their easy-to-construct design makes them portable. Mainly, I love that they exemplify the good qualities of American democracy, our intentions to make the world right. And as always, I love that they remind me of my dad.

Posted by boxoftales at 5:00 PM