Hwy. 395, A Road for Remembering and Honoring Those Who Passed Too Soon 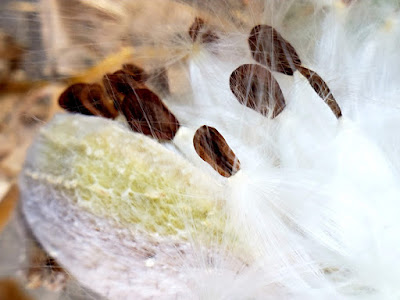 When John Goodnight fell backwards, he wasn’t expecting that by the next day his body would be remaining earthbound while his spirit would spring skyward to the next world.  Like the milkweed pod, bursting out its seeds in a canyon in Reno on the morning of his Memorial, John dispensed his final gifts to this world, ironically, in the season of fall.

The friends and family gathered on the crisp and sunny day, filling every chair, overflowing to stand in the back of the room, and peering in from the wide-open doors.  John’s three sons with much grace and humor began illuminating their father's gifts.

First his smile:  “We had a hard time finding any pictures when he wasn’t smiling,” said the oldest of his three sons.  On the screen flashed a photo of two of the very exhausted-looking sons, having just hiked fourteen miles - seven with elk or deer meat on their backs.  And there stood John, grinning and looking not the least tired.

In my memories of John Goodnight, I likewise can’t find any in which he was not smiling.  Not as he walked down the halls of Reno High School, not cruising Virginia Street after a football game, nor after school as he stood around with my friend DeDe, hoping to impress her.  He was a good man way back then and he never tarnished that image.  He married Dede, had three children with her, and was with her to his last minute.

Second gift – his positive outlook and skills:  “Wow,” John said smiling as he surveyed the damage of two huge trees that had fallen on his cabin, piecing the roof and tearing off part its front facade.  Next, he and his sons set to work with chain saws and tarps and in one day had the cabin safe from further damage.  (I am fairly positive that when John arrived at the next world, he just might have smiled and said, “Wow!”)

I might not have traveled to Reno for the Memorial, if John’s parting had been some years in the future.  But a death that arrives too soon beggars the presence of mourners and asks of them the twin tasks – to cherish what was worthy and to speculate on what might have been.

Traveling to Reno, I went first to Portland, Oregon, and that detour meant that I would cross over to Nevada through the Mount Lassen Forest.  I remembered that Dede and John at one of the last high school reunions told me that they had a cabin there.  I had never traveled that route, but it seemed appropriate.  As darkness fell, I kept up with a fast-moving truck, assuming that its driver knew the turns in the road and might spot the deer in the meadows and the road better than I.  I scattered prayers for the departed to either side of the road and out to the lake...  just in case John’s spirit was paying the area a visit.

The memorial was all anyone of us would appreciate for a memorial about ourselves.  The many photos and the lovely tales of John’s loves (flying, golfing, hunting, fishing, camping, his kids, his grandkids and Dede) and of his lectures to his children were delightful.  It was noted that John gave nearly one hundred of his body parts to others.  I mention this to honor his generosity and to make note that as unexpected as was his death, there was an element of planning in his passing.

(Today, another friend of mine – who is in the middle of a stem cell transplant – wrote that when things seem most disappointing, he reminds himself that he has planned everything.  The thought brings him back to a measure of control and therefore of comfort.)

John Goodnight’s passing put a light hand on all of us and restrained us for a moment to consider the messages embedded in his swiftly-executed leave-taking.  My drive home from Reno to Walla Walla is ordinarily a twelve-hour drive, but with an incontinent dog aboard, the trip was to take an extra couple of hours.  Plenty of time to consider the meaning of John’s demise.

Hwy. 395 is one of my favorite roads.  This trip, I tried to observe intensely, accept memories of my own good man, with whom I had traveled this road, and to savor the reflections about lives well-lived like John’s. 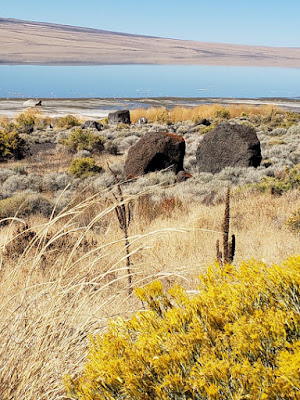 North on Hwy. 395, I always look forward to seeing the alkaline lakes, remnants of an ancient inland sea.  Along their edges are huge boulders, tossed and tumbled down from cliffs.  Both of these phenomena remind me that the lives of humans are and will always be a speck.  A miniscule particle of life.  Least our existence be irrelevant, it behooves us, like John to live deep and well.

There isn’t much traffic on Hwy. 395 on the stretches between the small towns.  In hundreds of miles over multiple hours I saw five semi's - three of them hay trucks, a handful of passenger cars, a fist full of pickup trucks - one loaded with wood, and three motorcycles. The sparse traffic didn’t distract me from reading road signs.  Bacon and Hogback Camp, Shirttail Road, and Cougar Crossing.  They reminded me of John’s love of hunting and sport.

When I entered the town of John Day, I noted a sign: “Population 1752.”  Who keeps the sign current?  Seems like a death like John’s or a birth ought to require a quick reposting to honor their significance.  Checking on the internet later, John Day's population has dropped to 1669 from the 2010 total on the sign; someone is keeping an honoring count. 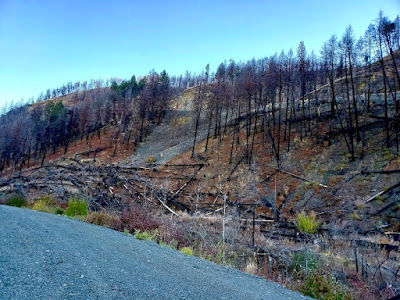 At the foot of the first of many ascents over mountain passes, three semi-trucks, trailing an acrid smell of burning brakes, approached me.  Further on, a large sign in a winding canyon indicated one curve as being precisely located on mile 53.3 of the highway.  The marker helps in designating the location of any nearby accidents.  Hillsides bore scorched trees.  All of these reminded me of the fragility of life and of the normalcy of accidents. 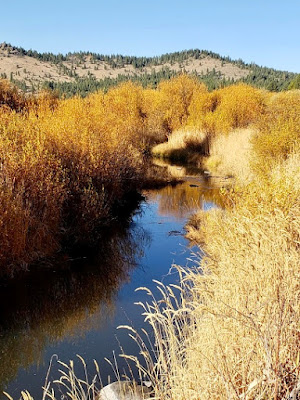 The canyon streams and rivers along Hwy. 395 dress in river willows.  Dark red stalks in the winter. A silvery red in early spring. Greenish in the summer and gorgeous shades of ocher yellow and muted orange in the fall.  All beautiful.  Any time.  They called to mind a quote from the writings of the  Baha’i Faith, “If thou is not happy in this season, for what season do you wait…?”  John with his year-round smile seemed to know this wisdom. 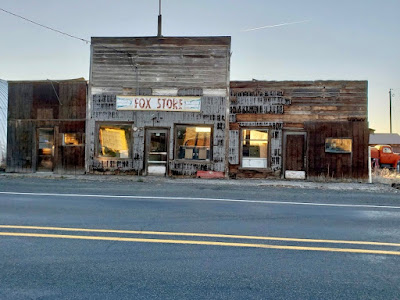 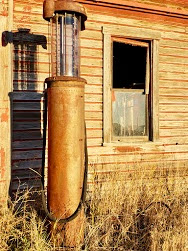 In early evening, just before the sun was to set, I came to the town and valley of Fox.  In all of the length of the road, Fox is my favorite valley.  Its few buildings shoulder up to the edge of the highway, wearing a swagger like an old cowboy.  The wind-scoured buildings, dated gas pump and deteriorating asbestos siding speak of hopes, disappointments, and tenacity.  I don’t know if John Goodnight ever visited Fox.  If he had, I think he would have written a cowboy poem to honor it.

I traveled Hwy. 395 a couple of times with my husband, Gary.  He passed away seven years ago now.  I remember our two girls and us hurrying into Squeeze-Inn Restaurant in John Day before a torrential rain.  Laughing, we watched the storm and puddles forming outside in the parking lot as we snuggled together.  Another time, Gary and I stopped in Fox Valley and he took photos of a gray-tinged tumbledown house.

Like Gary, John Goodnight seemed to have scattered a good share of memories, wisdoms and comfort.  Good men, worth honoring for their many gifts.  In the seeds of their examples are the genetics for the rest of us living an intentional life. 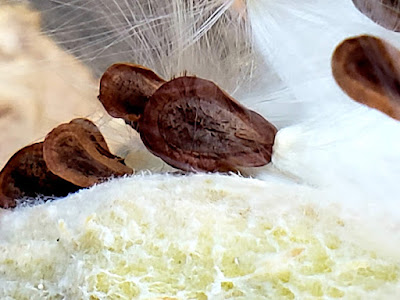