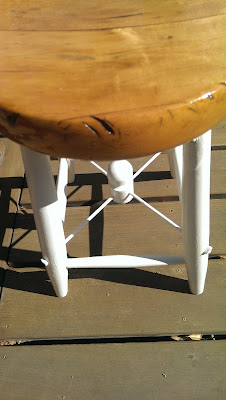 I’m late.  Most years by mid-June a list of the summer projects has been posted under a magnet on the refrigerator, the shop cleaned and the sawhorses set-up.  Last summer I missed the ritual when I spent the summer mostly painting over smoking damage from a renter.  So three weeks ago, late for me, I finally began on this summer’s list. I found myself delighted to be among old tools and pleasing tasks. 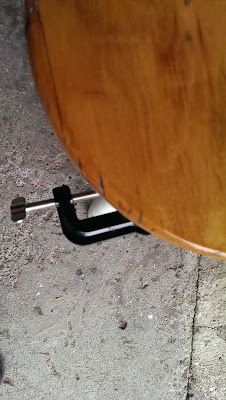 Clamps are among my favorite implements.  I seem to use them often.  I have large ones for repairing chairs and smaller ones, like this one in the photo that I was using to hold together a re-glued leg. Flipping the little stool over I had realized from the dark green paint on the bottom that it had military origins.  Walla Walla hosted a large air base during WWII.  I’m imagining that this stool could have been a mechanic’s one since its two-inch thick maple seat has saw nicks and deep oil stains. I’m curious how this little stool with its gorgeous thick maple seat came into being.  Who during the war designed it and designated its use?  How many were made?  Where are they all now?  The stool was obviously made with some pride.  I’m glad it still has a life now as a table next to the smaller of my claw foot tubs.  It is nice for holding a book, an iced drink or a candle.  One day it may be a shop stool again.  That would be fine. 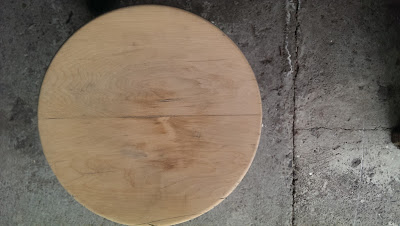 The leg that I was repairing had been previously screwed together and I was just reinforcing the break with some glue before retightening the screws. I sanded the seat for almost an hour having to go fairly deep to eradicate the oil.  I left the slightest trace as a historical marker.

Back and forth to the refinishing cabinet for supplies was pleasing; it was familiar work with precisely the tools to do the work.  Scrappers, masks, stripper, steel wool, wrap to cover the stripping fluid while it worked, dental tools and those clamps.

My jobs this summer have included stripping, repainting and varnishing the stool and also a bathtub seat.  I finished stripping white lead paint off of old shelving for the kitchen cabinets and sanded, stained and varnished them.  I took off the old paint from a couple of doorknobs to put into the freshly painted antique doors upstairs. 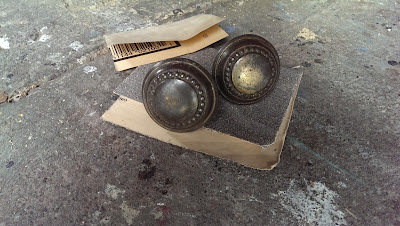 The work was transformative and reflective.   The kind of work that opens doors.