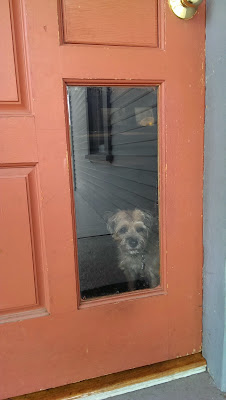 "Company coming today," I said to my dog, Lizzie.  She was sitting next to me on the floor, while I put on my socks.  She immediately turned her head looked down the stairs and cocked her ears to hear the arrival of someone at the front door.  Although I was just making conversation more to myself than her, to my surprise she knew precisely the meaning of my words company coming.

Only recently have I begun to say company coming to her, but she is a quick learner.  Realizing that she had added these words to her list of known expressions, I began to feel guilty for not having given her more extensive vocabulary lessons.
But now, I shall begin.  She is four years old.  So much more grown up then when she first arrived as that tiny puppy.  She now is twenty-eight in human years.  She could have such a better receptive vocabulary than she has.  What should I include in the list of new words?

Two years ago I taught her travel meaning that we would be in a different place at the end of the day from where we had been at the beginning.  She seemed to at least absorb the excitement in my voice and responded accordingly.  I would love to say that that word is still in her repertoire, but I am afraid now that she might have lost it do to the lack of opportunity to be out on the road again.  Even though we are no longer traveling in it, I could begin teaching her more technical vocabulary to keep her abreast of the changing world.

She knows the difference between an e-mail and a text message.  The latter she despises, as its incoming ring tone is so annoying.  If she is on my lap and hears that noise and I say text message, she'll jump down and go away.  She knows that if there is one text, there is almost always a second.  (I feel that she would prefer to be with someone, whose phone is so old, that texting is almost impossible.)  Maybe she would appreciate learning the words: hashtags (like #doggy social clubs or #dog park), Dogpile (search for one), or blogspot (might smell good).

That reminds me that she does have some mathematical skills; she can count to three.  I toss three treats into the grass in the morning after she has eaten.  Sometimes I count the treats as I throw them.  One, two, three.  I am sure that she is checking.  At the command go find, she races off of the deck to search-out three treats.  You would think that a Scottish English terrier would not mind getting her feet wet, but early morning she won't go into the grass without some encouragement in the form of treats.  Once there with the early morning dew having wet her paws, she will then wander and do her dog business.  I believe that she would appreciate learning higher math, but I have been reluctant so far to feed her more treats.  Ten.  One-hundred.  Infinite number.  She would translate learning higher math as dog joy.

She already knows take photo.  When we are out walking, I'd stop to take a photo and she knew that there would be a little pause in the walk.  She had taught me the word smell, a stop for her expressed with butt to the ground and a refusal to move.  (Now that she knows that she can teach me dog, I am wondering what she is planning to add to my vocabulary.)

You would not expect a dog to have multiple definitions of words in their vocabulary, but you would be wrong.  Case in point.  Like the Weimaraner in the photo above, whom I met last year on a trip to Los Angeles, Lizzie likes to get on top of the table.  When I hear the kitchen table squeak, I know that Lizzie will be on it checking for crumbs.  From the other room I would yell No!, but Lizzie quickly would choose from her multiple definitions of No! and respond accordingly.  Get off the table (move quickly, surprised that Kathy knew what I was up to), stop begging (ignore this command), do not bark (time for just a few more well emphasized barks) or don't eat the cat food  (respond so slowly, that it will all be gone before Kathy could reach me).
I could add words to Lizzie's vocabulary like surgery, groggy, and pills.  Bey, the dog down the block, recently added these words to his vocabulary.  If Lizzie knew their meaning, she might be more cautious about her health.  For now she just sees Bey go by and admires his new outfit.  She does smell Bey on me and wonders why I smell a little like that worrisome place that she knows as vet's office.  She doesn't recall that they sell those stylish shirts.  Maybe vet's office has two meanings.  Worth considering in a dog's mind.

Posted by boxoftales at 1:54 PM