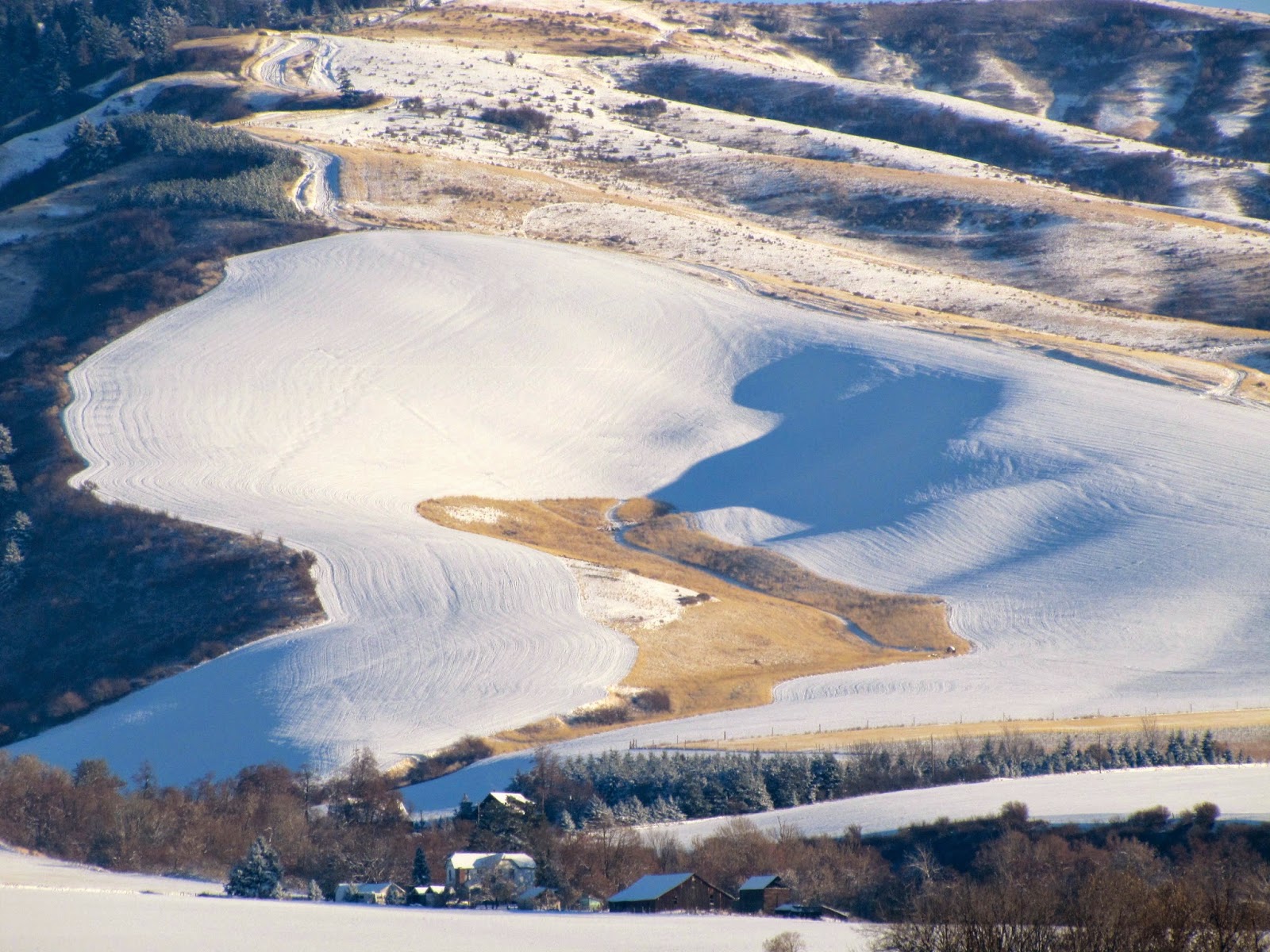 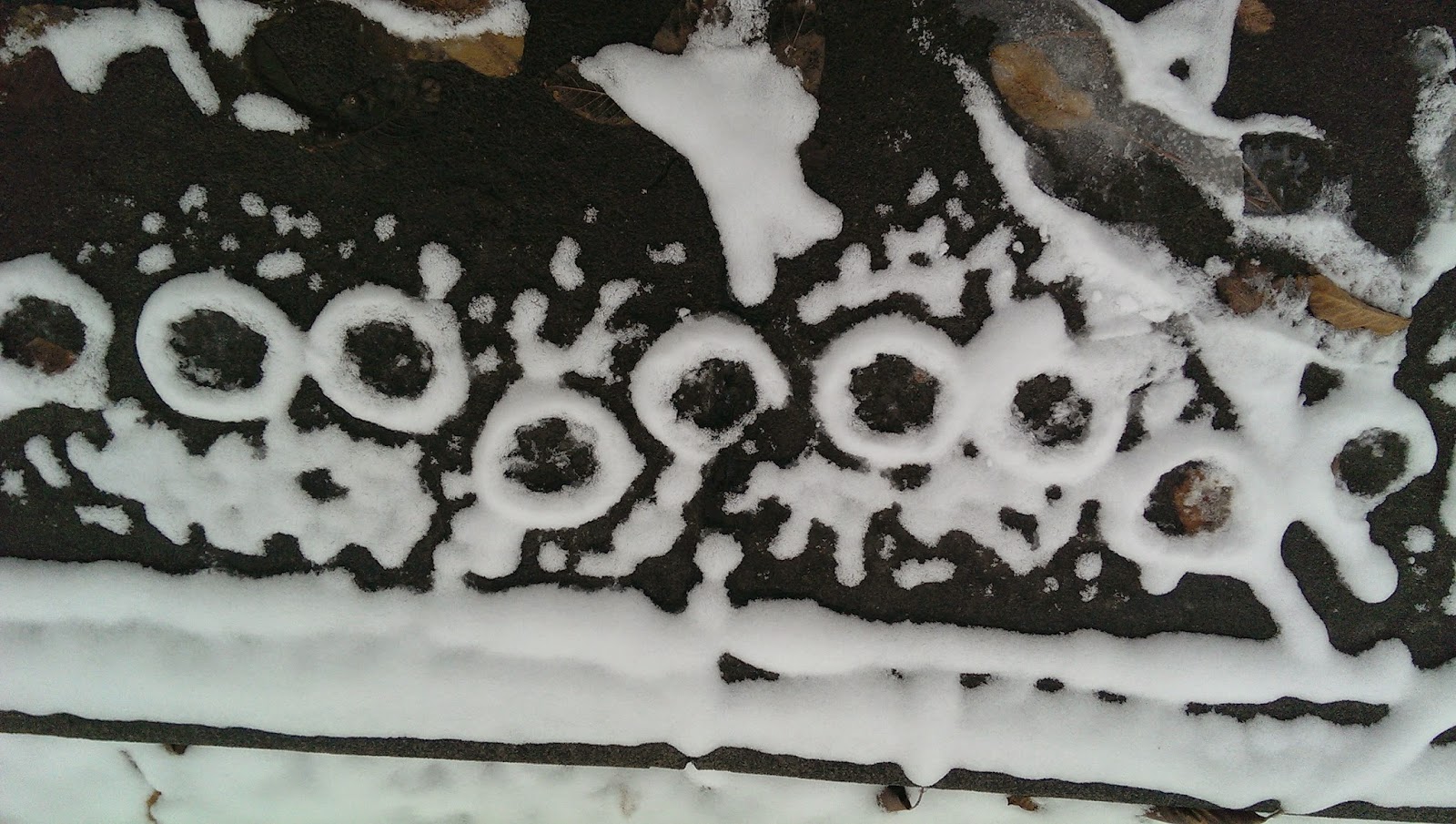 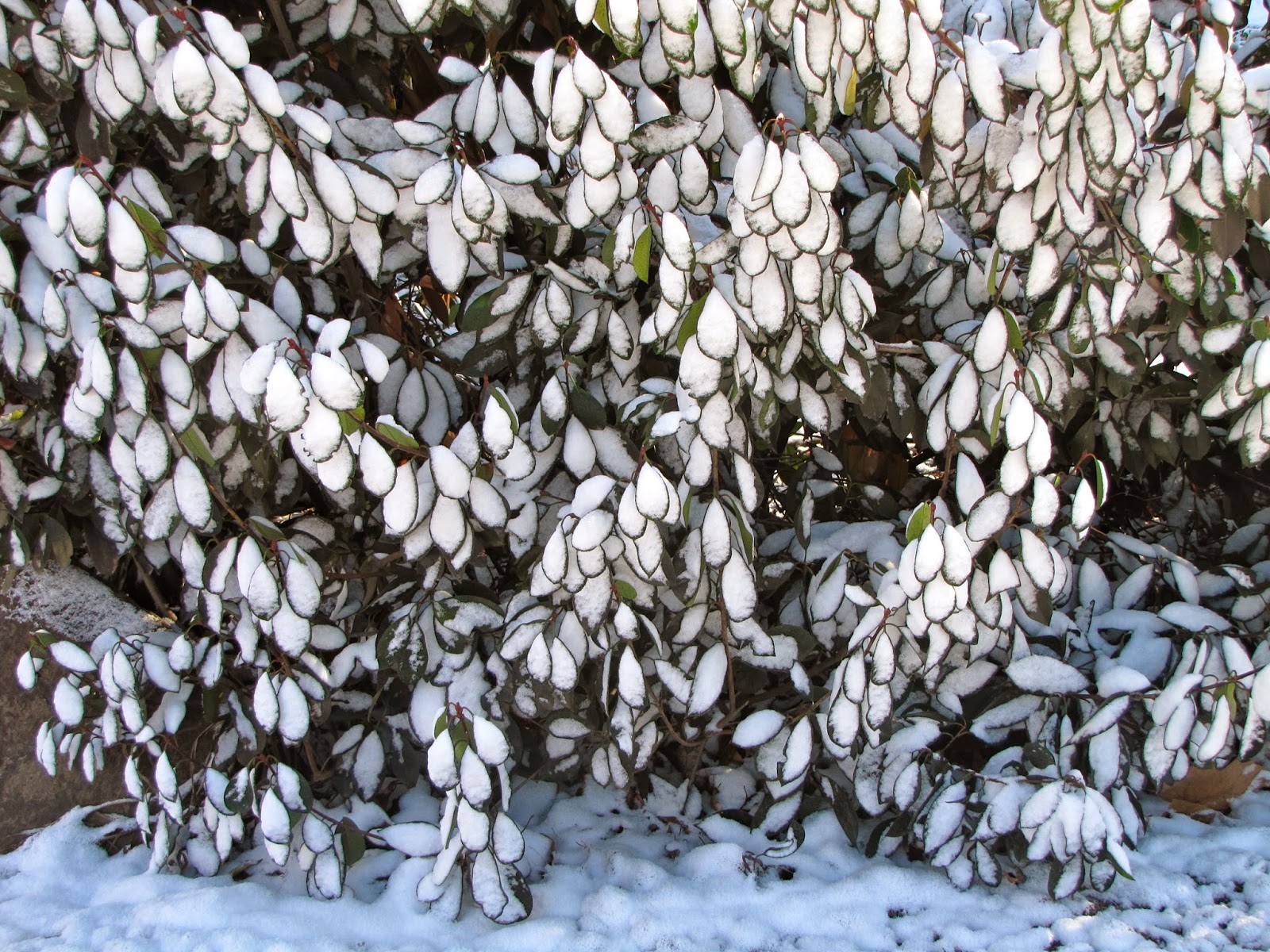 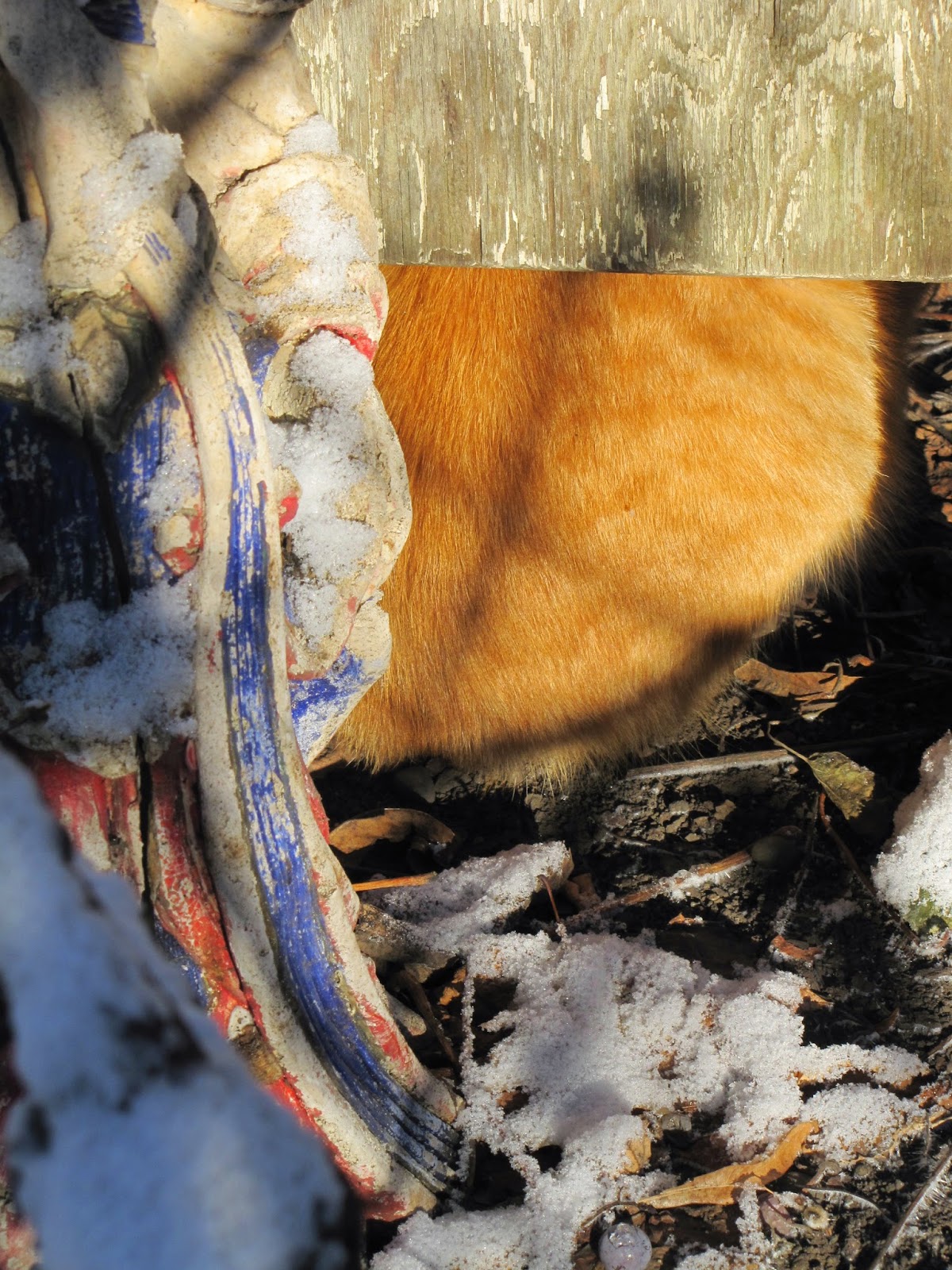 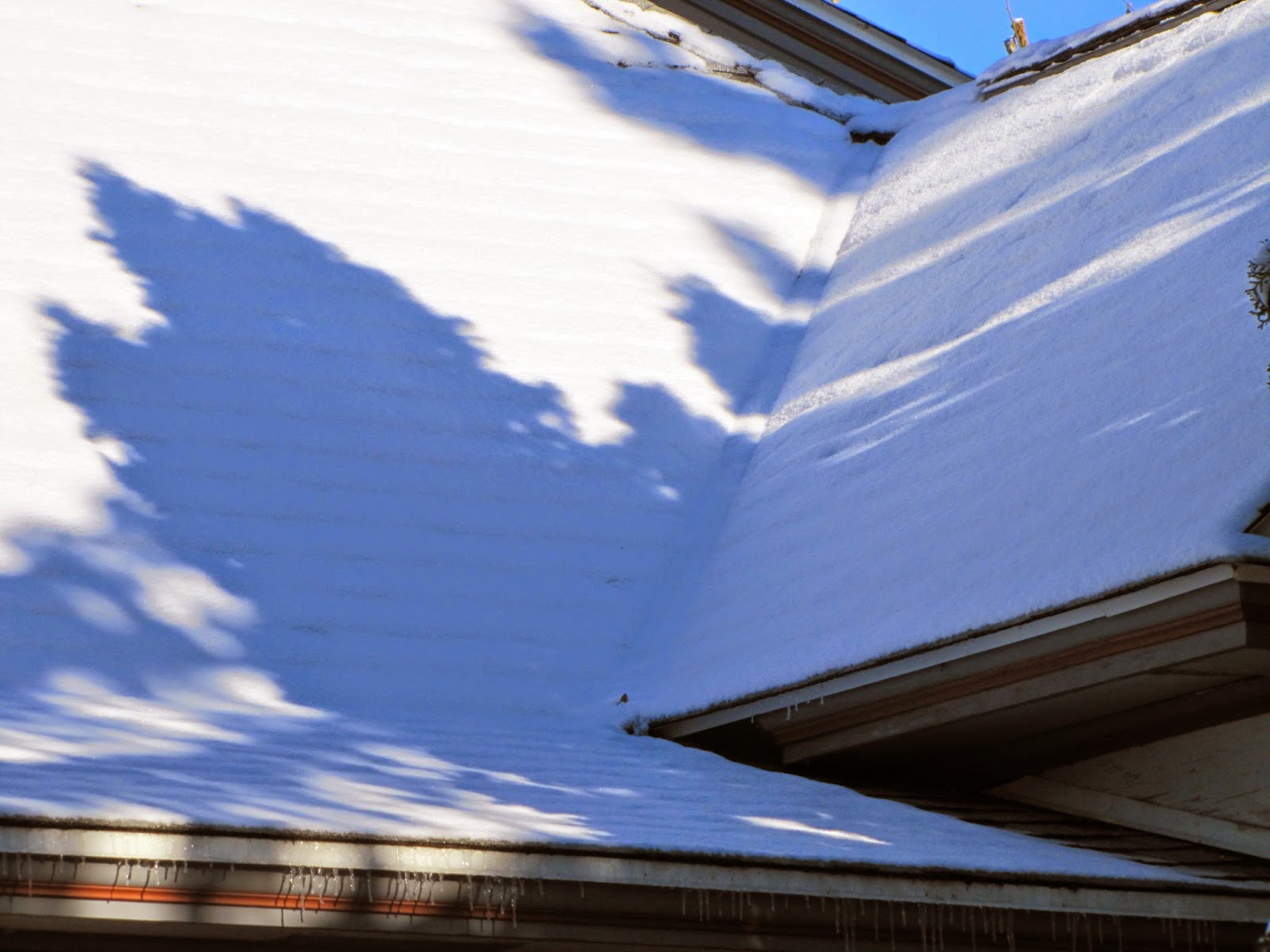 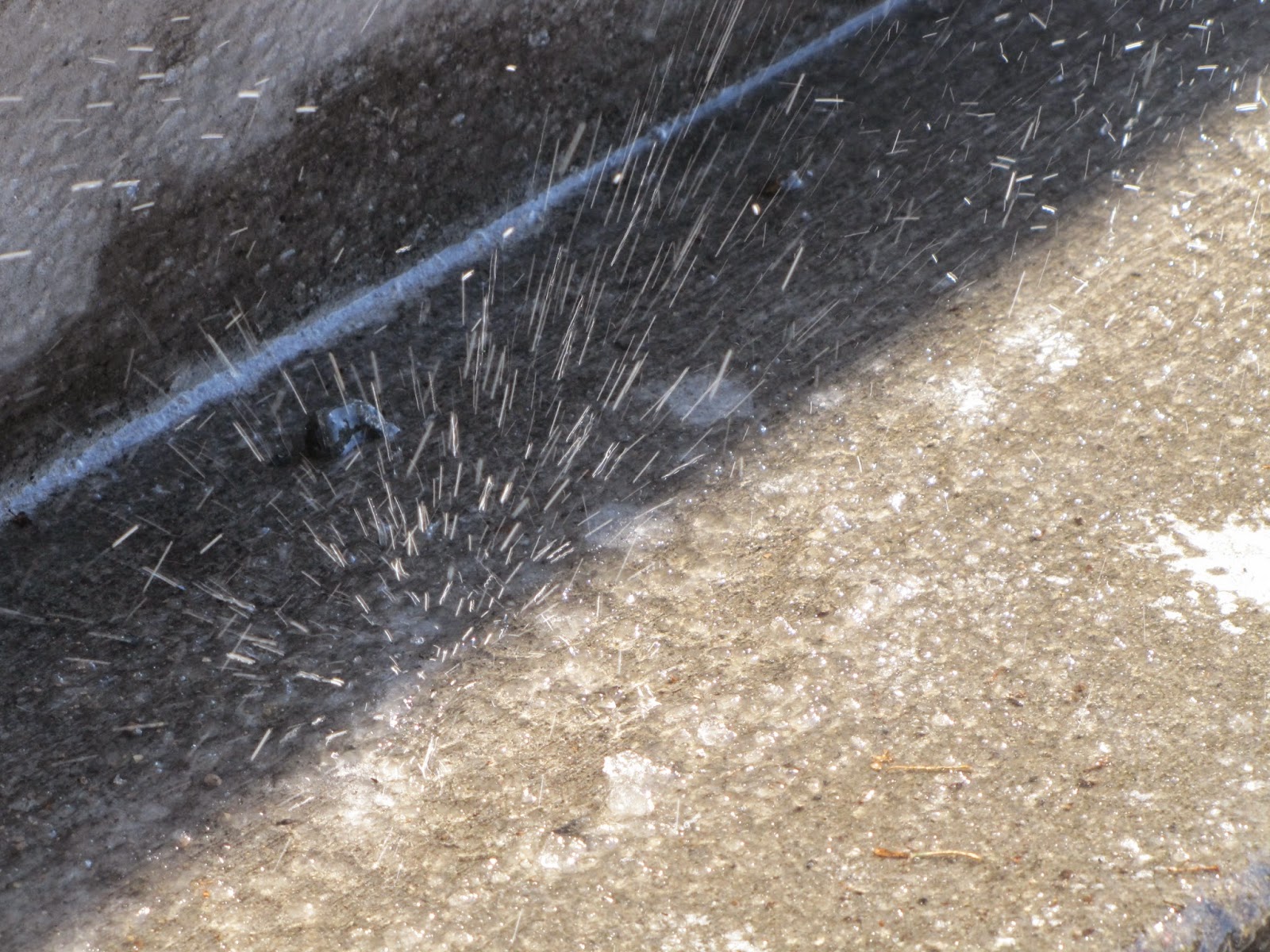 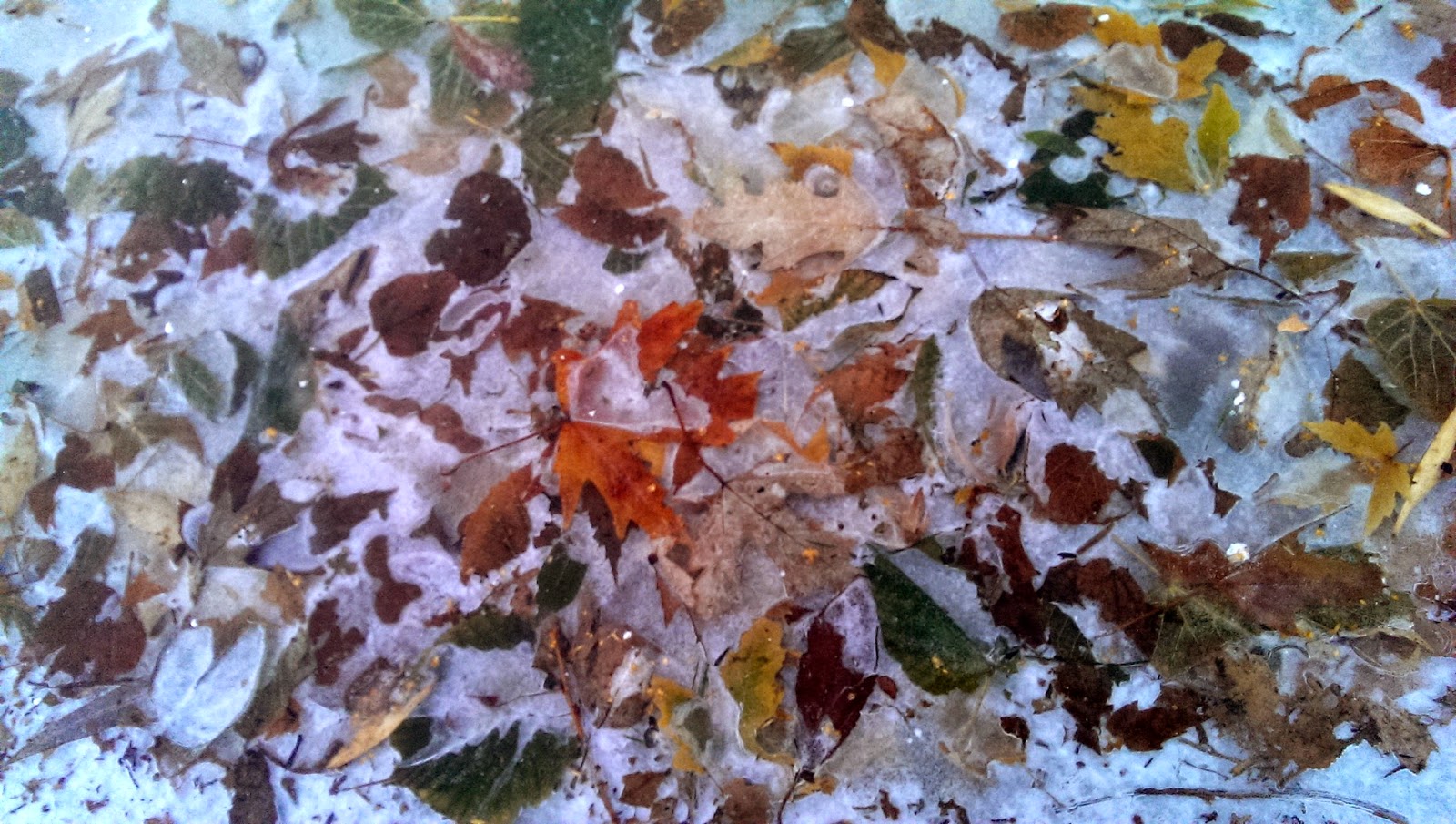 Hold these images in your head.  A swooping crow carved by a hill's shadow, suction-like prints from a creature from out of space, a new species of white leaves edged with green, a cat's butt hiding under a stool hoping birds won't see it, the morning sun making shadows on the roof, a splash of melting ice just above the last photo of fall leaves frozen in an early snow.  Look at them again slowly.  They are for your good health.  Your brain health.

Senility is like the topic of sex for a teenager.  It is on your mind, but proffered as a conversation piece with hesitancy and reserve. Forget the name of your host, whom you have known for twenty years, and wonder if Alzheimer's will be diagnosed next week.  Can you still smell peanut butter?  Good, you likely don't have Alzheimer's yet.  Hedging your diagnosis, you begin doing crossword puzzles, take vitamins for brain health and if you are lucky find some snow.  Yes, snow.

We have had two snowstorms in Walla Walla that left just enough of the white stuff to brighten the world, make walking treacherous and challenge the brain.  Let's start with the walking piece.  Walking in snow, when it is a sporadic activity makes the brain focus and makes you proceed deliberately.  Minute decisions ask of your brain to choose the safest route, to guide your footsteps at a slower than normal pace, to be alert to the sheen of ice and to be more aware of oncoming traffic.  Successfully navigating snow and ice is a boost to your ego, a lift to your spirit.  A good mood is good for brain function.  New or at least rare situations make the brain work harder.  Bring on the snow!

Walking during the first snowstorm brought my attention to those suction cup like footprints.  At first I was puzzled about who or what had made them.  My brain went into "what if" mode checking off possibilities.  My first thought was that the footprints were made by a creature from out of space, or a giant octopus or finally made by Bey, the big dog from down the block.  While my brain whirled through the options, it was feeding off of a situation that simply doesn't appear on a dry or wet sidewalk.  No snow, no wild brainy ideas, no thinking out-of-the-box or even in-the-box.  Bring on the snow!

The crow swooping down to grab a morsel of bread shadowed on a hillside would have been almost invisible on a muddy field of wheat.  The snow made the bird so clear that I almost checked it on my bird list for the month.  Recalling data like the shape of a crow uses one part of the brain and then grabs the piece that creates fantasy from reality (hill shadows in the snow resembling a crow) and the brain makes synapse connections once again.  Snow at work.

The snow covered green leaves were so stunning that I stopped and gasped.  My brain sent out a wish.  Could I have a bush as beautiful as that one in my yard?  What kind was it?  At that point realism caught up with my brain and said, "Oh, that is just snow on leaves with the edges melted in the sun.  No new species.  I want my brain to have work like this.  Shakes things up.  Reminds me that my brain still loves to work, to play and to solve problems.  Snow at work.

Clumps of snow falling from a branch indicate the movement of bird or a squirrel, a swinging bird feeder marks a leap by that cat who has been hiding near the feeder and splashes of icy water mark the sun warming the roof and warn of ice on the stair later.  We must be programmed to notice motion in winter.  I catch my brain being sharper in snowy weather.  Were I a hunter, I would need to notice motion, tracks, and the angle of the sun on the roof and mark the weather's oddities like snowing on fall leaves before they have even lost their fall color.  I would need those skills to bring food to the table and to keep myself safe.  One day, maybe, going south for the winter will have an appeal for me.  For now, I prefer to take my brain work in snowstorms.  Bring them on!

Posted by boxoftales at 8:03 PM