A Travelogue of Embarrassments and Disasters 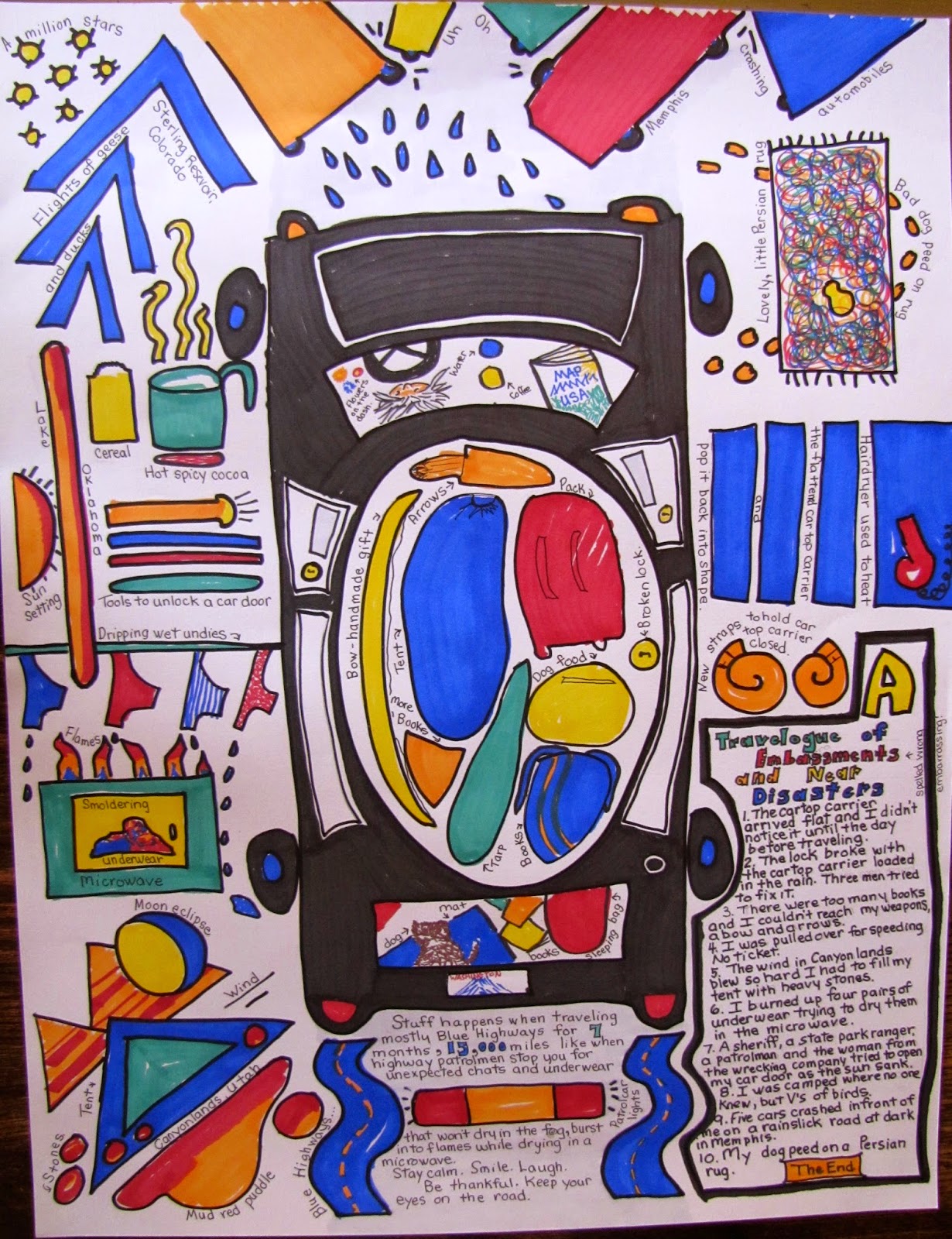 Fairy tales usually tell all.  The seemingly stupidity of trading a good milk cow for a bean or the hazard of carelessly pricking your finger on a poison-tipped object are everyday disclosures in fairy tales.  When I packed my black wagon and set out for seven months of adventure, I decided what got embellished and what got left out in the telling.  But I was shortchanging my readers and I knew it.  Burning up my underwear in the microwave was perhaps the, stupidest and the funniest tale that was excluded.  Coming around a highway bend with a five-car crash spread across all four lanes of a rain slick dark highway was potentially the most disastrous untold tale.  (I survived.) 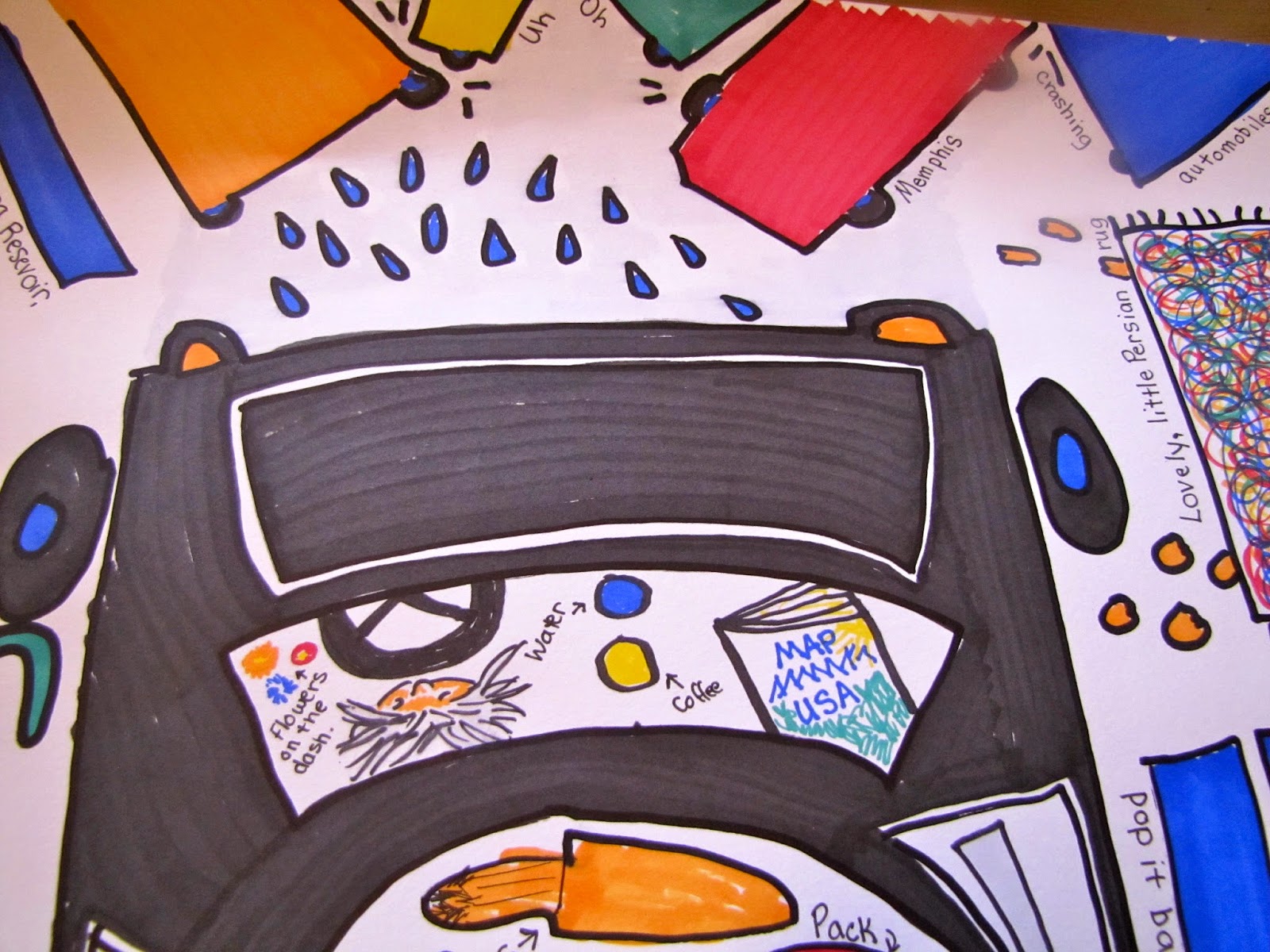 My travelogue may have seemed a little bland minus fire-eating dragons, ogres and talking animals (other than Lizzie, the dog), but here in this singular post are the undisclosed pieces of the tale.  I had locked them in a portmanteau and hidden them from your sight, but guilt struck and so here is the unadulterated version of my fairy tale of a trip. 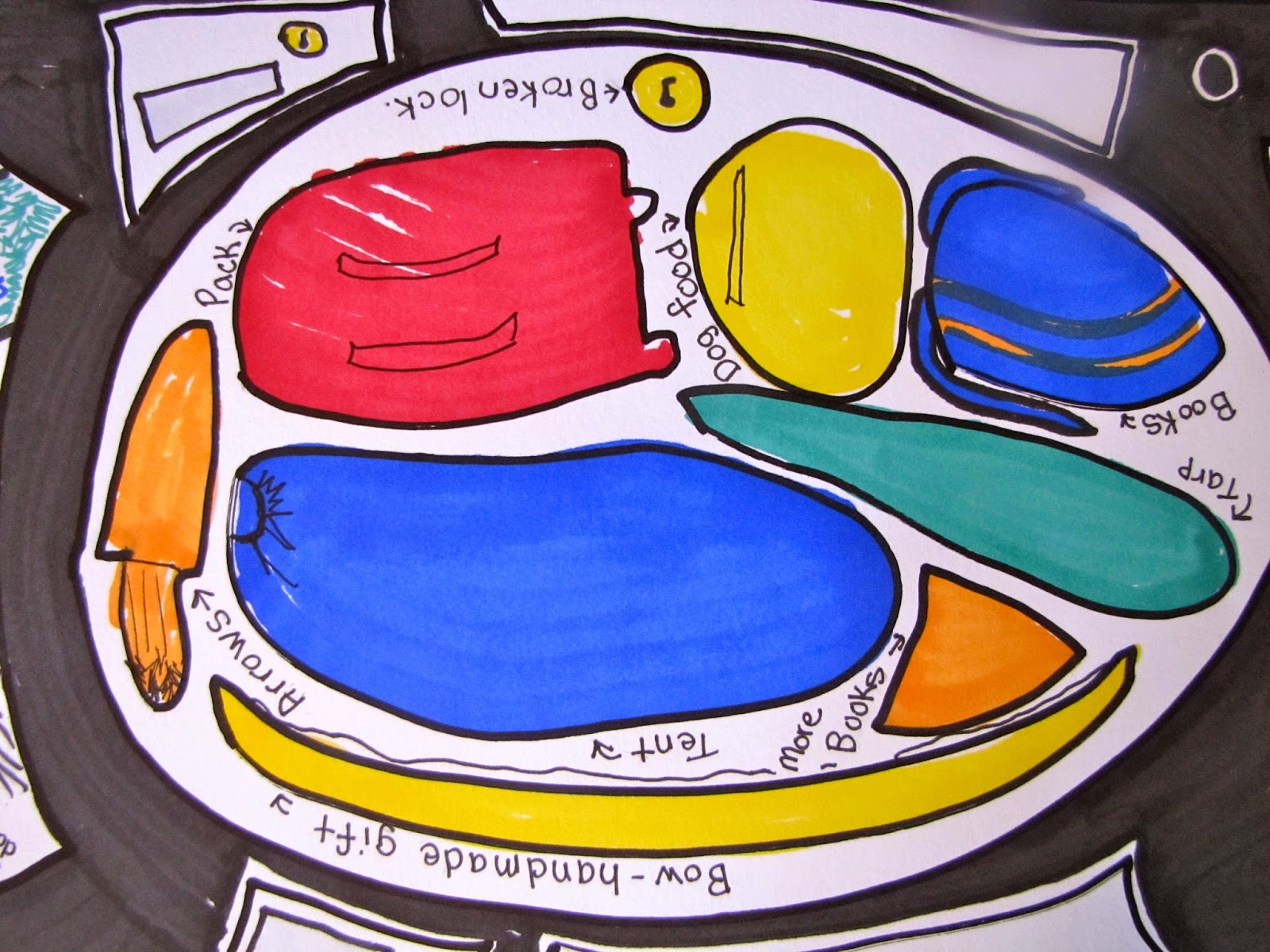 Like a princess setting off to fight the dragon and find a prince on a long journey, I planned ahead ordering my car top carrier well in advance.  Saddlebags weren’t going to be sufficient to carry all of my baggage.  The carrier came wrapped, delivered by a moving van and dumped on the porch. Stupidly I didn’t open it right away, just happy that it had arrived.  The day before the beginning of the journey, I dragged out a ladder and unwrapped the car top carrier to find it had been flattened by a heavy object (maybe by a dragon) on the journey here and was now oddly warped.  Tears rolled down my face as I tried to pop it back into shape.  I called my friend, Marc, and the two of us got out a hairdryer, warmed the plastic and with a fair amount of stomping and grunting we managed to get it back into a useable shape.  Marc assisted in getting the thing up on the car and secured in place.  Rescued by a prince of a guy.

The next day in pouring rain I loaded the car top carrier.  “Are you taking a weapon?” some friends asked.  My lovely hand carved bow made by Marc went in the far side of the carrier.  Not very accessible as a weapon to be sure, but I just wasn’t expecting trouble.  I went to lock the car top carrier.  No luck.  First Phil, than Billy and finally Bob, all neighbors, came and tried their hand at battling the lock.  When it would not function properly, Billy lent me a tie-down strap to get me as far as the locksmith, who couldn’t work her magic on this lock and so on to the auto parts store to buy two brightly colored straps that the store lady helped put on.  Off I set with straps gaily flapping in the wind like a decorated steed with ribbons flowing from its bridle.  Actually the whole thing looked dorky and make shift, like I didn’t quite understand how a car top carrier worked.  Just lock it!  In Colorado Springs R.E.I. cheerfully ordered a new carrier, refunded the shipping cost of the original delivery and a young salesman assisting in getting the new one loaded.  Another prince. 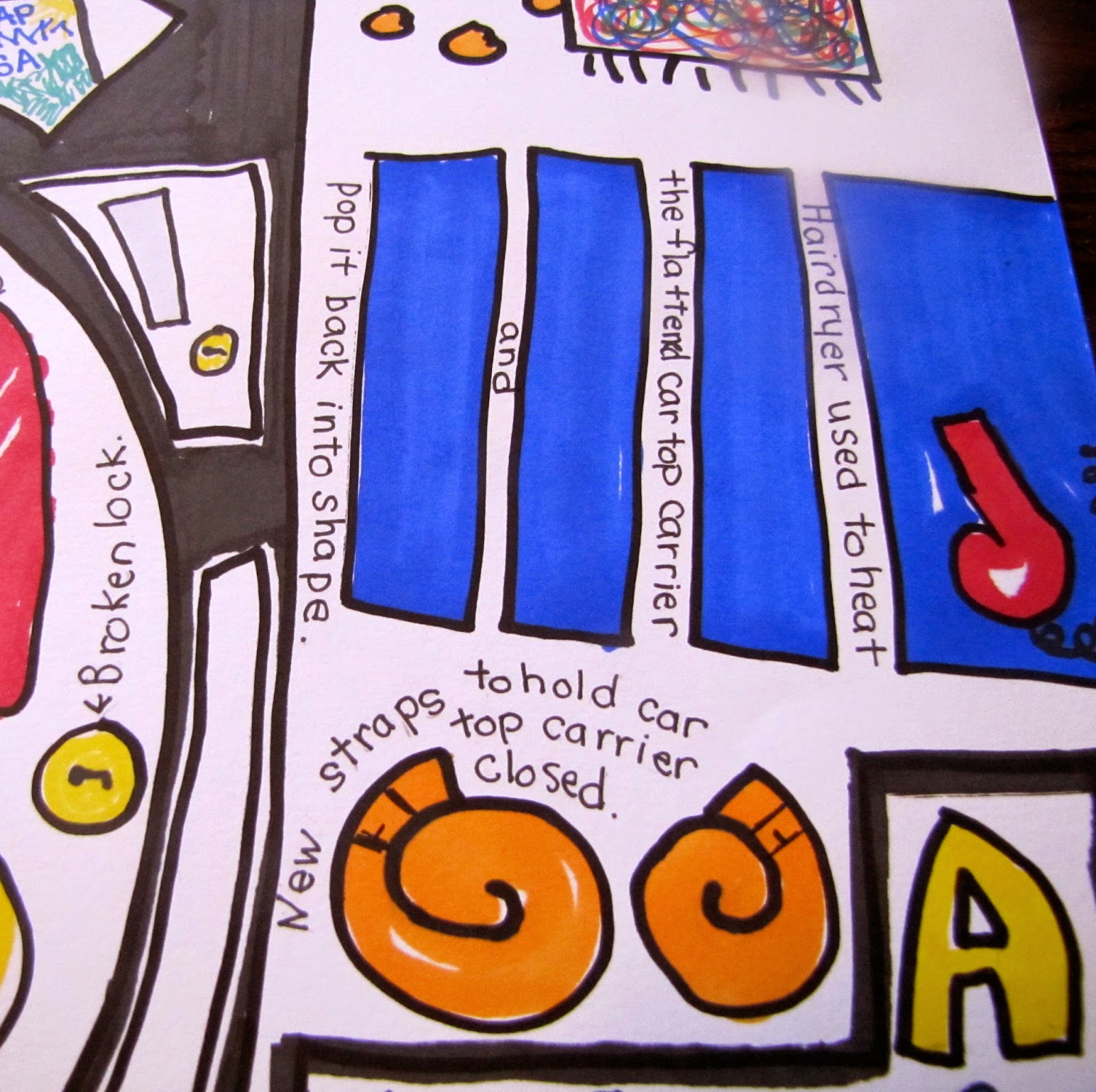 Utah is was where a tax collector (as this is what they are) pulled me over for swiftly speeding on the outskirts of the town.  I actually was looking for the sign that said I could speed up again and thought that I must have missed it.  Desert towns sometimes seem to spread so slowly outwards with a house here and now there, that I couldn’t tell if I was back on the highway or not.  Well I was also fiddling with the radio stations.  Grey-haired smiling ladies must look pretty harmless and maybe slightly inept with bright yellowish-orange straps dangling from their roof top carrier.  “A warning”, he said.  But of course this is where my driving record stands as a testimony to my usual law abiding bent.  Another prince of a hardworking highway patrolman let me proceed on my journey. 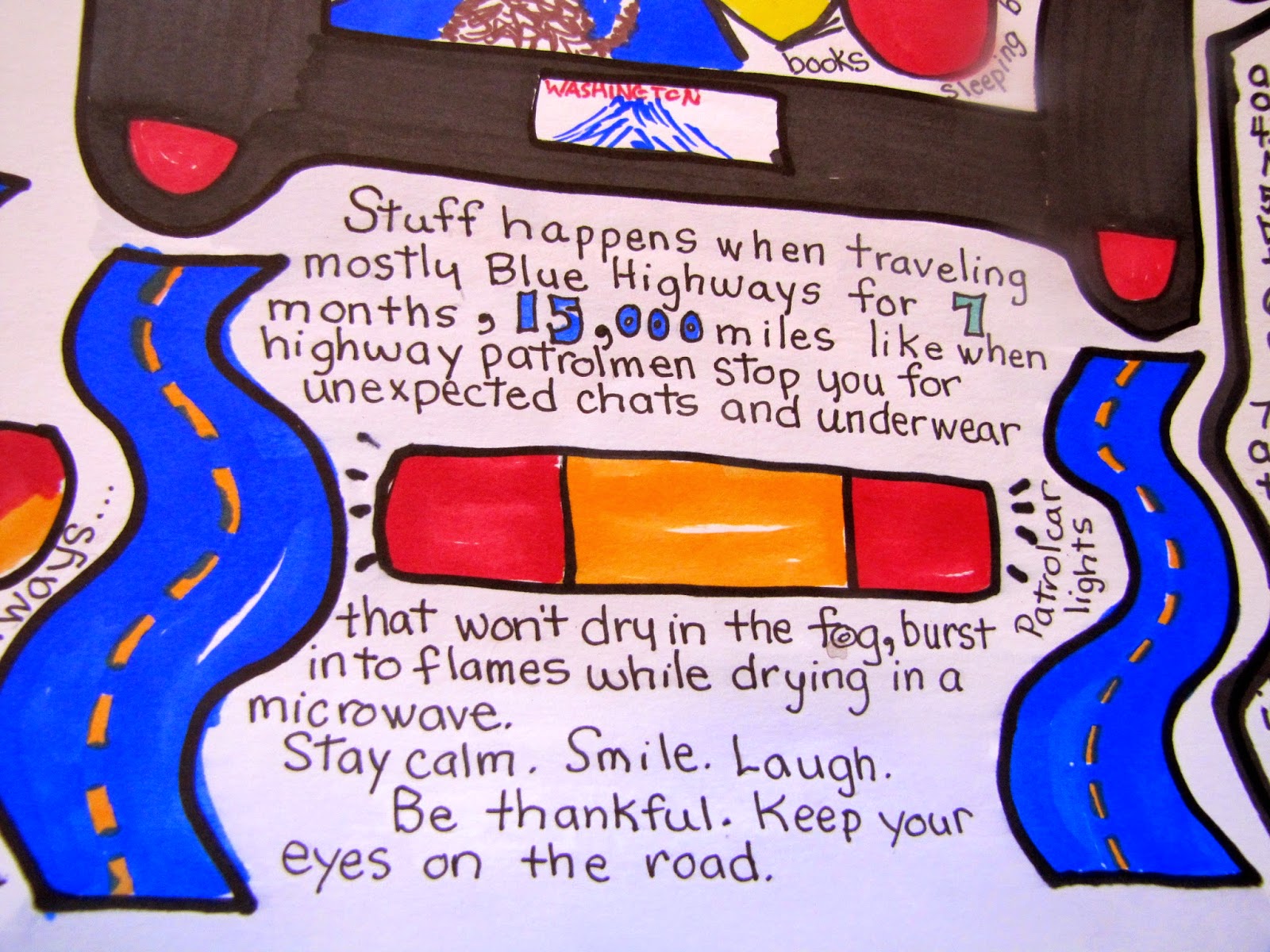 Wandering maidens usually sleep in cottages or snuggled under the roots of a tree.  I could sleep in my wagon, but I also had a tent.  In Canyonlands I choose a free camping site on BLM land just outside of the park.  The campsite had to be reserved with some evidence of possession.  Exhausted at the end of a long driving day, with wind pushing me sideways and rain clouds moving in my direction, I set up my tent to mark my site. The meaning of a nearby scattering of large stones became obvious, as I had to use them to hold the tent corners down.  When the tent still threatened to blow off into the desert, I added more heavy stones.  With the tent well filled with rocks, I never slept in it.  It looked a little crowded.  The photos of the tent sitting on a hillock above a deep red puddle made the week’s camping site look idyllic, when actually the tent up close looked more like a rock shop. 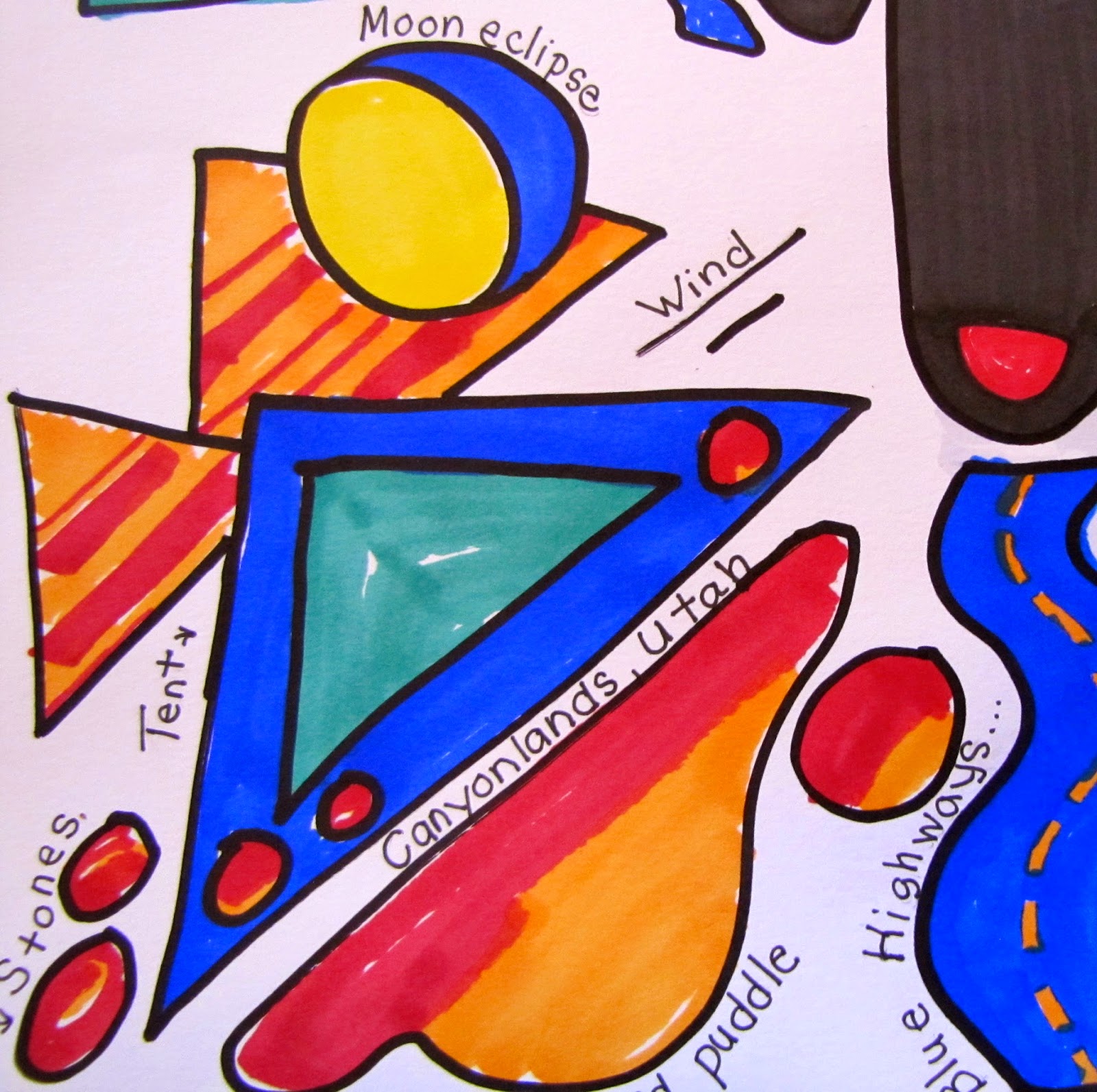 Mothers must have worried mightily as their children left on adventures.  Fairy tales are replete with the hazards of not being able to send word home for help.  In Canyonlands, no one knew precisely where I was.  I felt a little guilty that those who worried about me didn’t know where I was precisely.  But really, I kept myself safe.  That is the bravery that new-age princesses possess.  The most glorious of all nights was one of those nights.  I pulled into a deserted campground after having been lost.  GPS got me there finally.  As I stepped from my car a million stars from horizon to horizon greeted me.  The last few honks of the night foretold of a body of water nearby.  In the morning I was woken by continuous waves of geese and ducks flying over my car as I ate my breakfast of steaming hot chocolate and cereal.  A real princess could have lived happily ever after in this spot and the story would have ended right there. 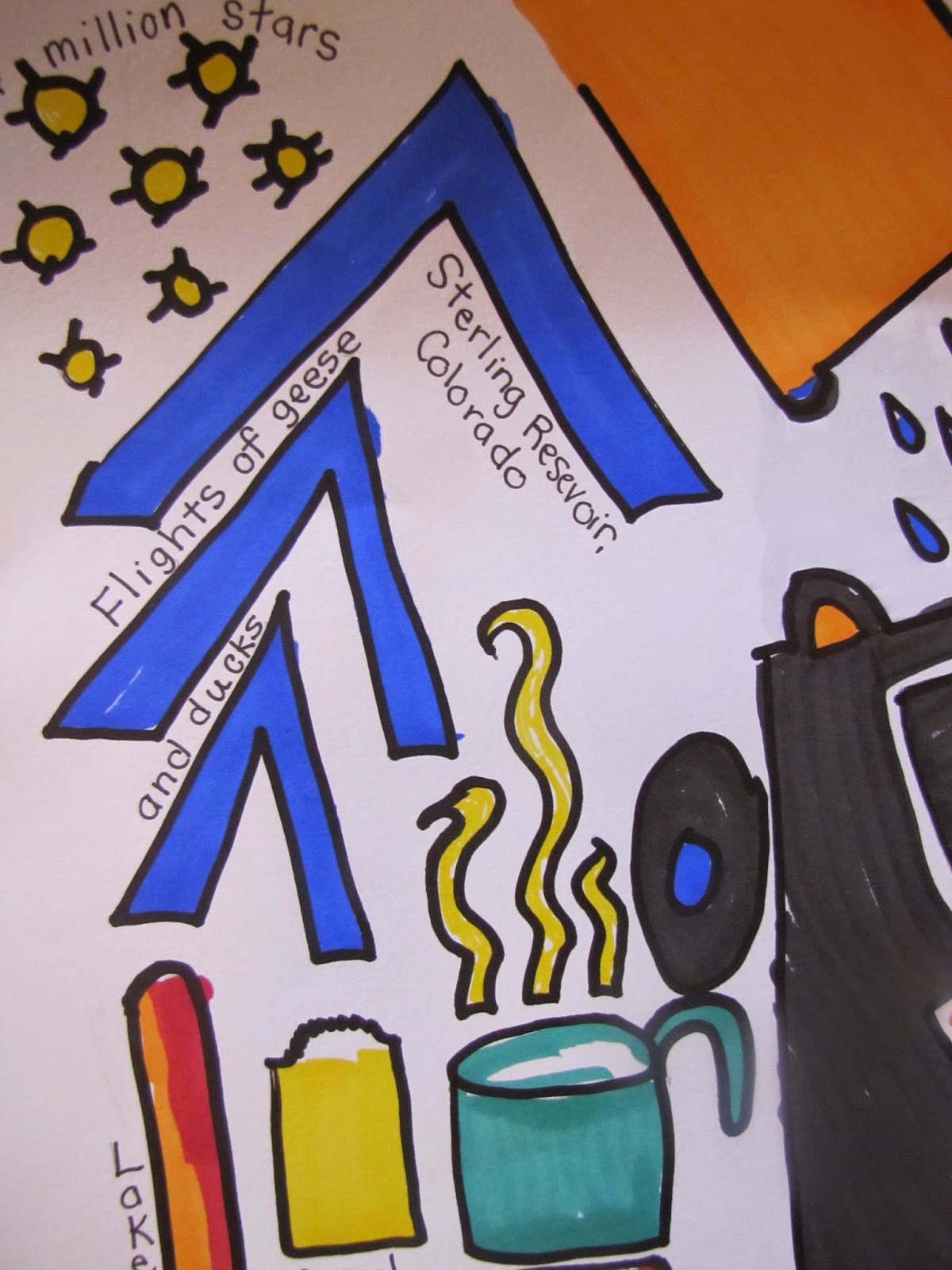 What book of car stories would be complete without at least one locked out of the car tale.  Now I prepared for this event with a key hidden under the car.  But the plot thickens when the key must have been brushed off in the snow and ice many states back.  So when inevitably I locked my key in the car fussing with the dog, the sun was heading rapidly below the horizon in a small Oklahoma state campground.  With the luck of a princess I knocked on precisely the right door (and actually the only one available) of the young couple watching the sunset.  The teenager called his dad, who it turned out to be the local sheriff!  He arrived, and then the park ranger arrived, the highway patrolman arrived and eventually from an hour and a half away the wrecking company lady arrived.  Coming and going, the highway patrolman checked on me in the cooling evening, negotiating the best price for the wrecking company and returning with his flashlight at just the right moment.  By the patrolman’s flashlight and headlights, the wrecking company lady with her bags of tools finally unlocked the car for only $90. She was a princess for sure. 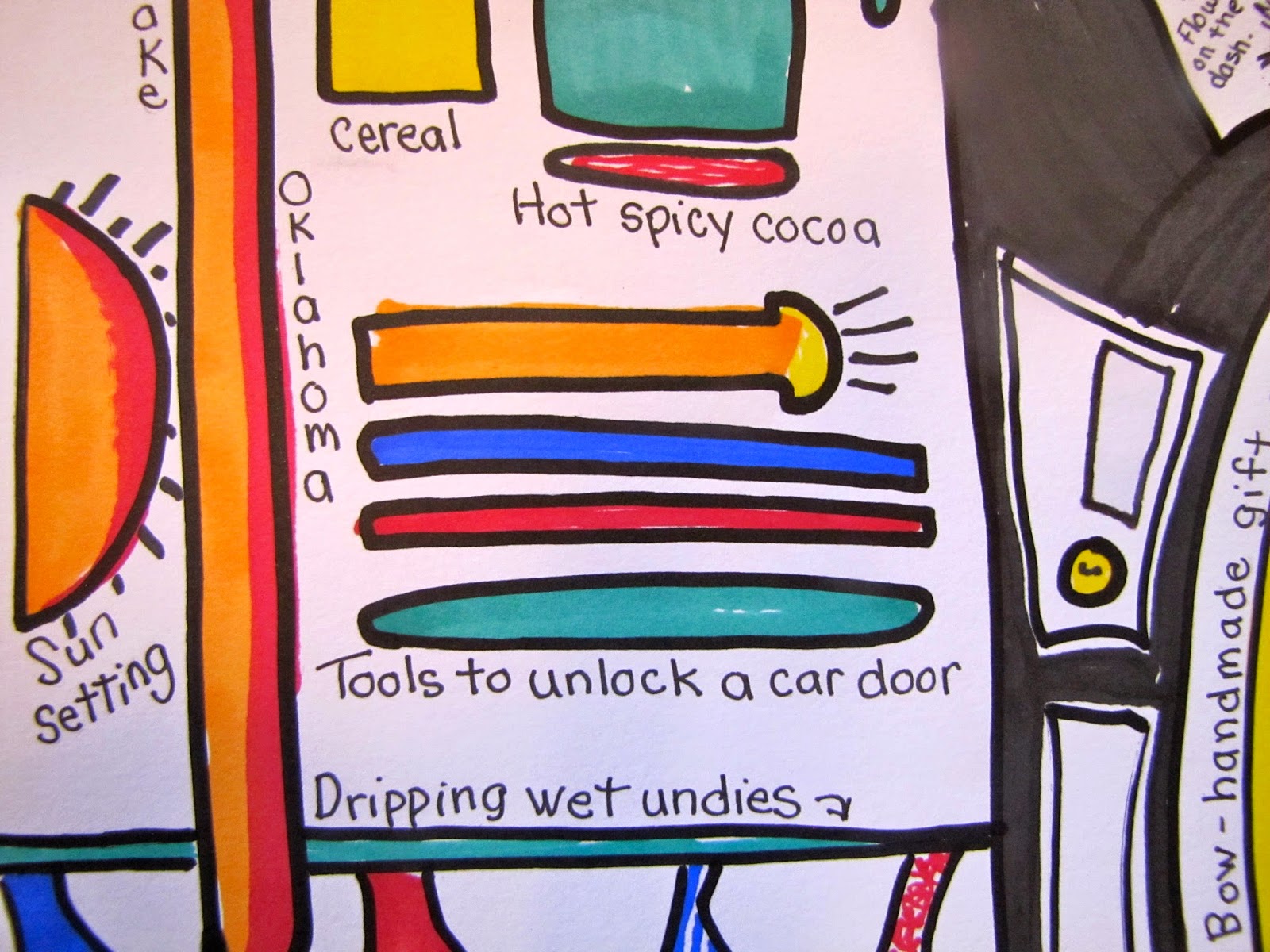 My dear friends in Akron have collected gorgeous Persian rugs for many years.  Tim travels to the middle-eastern region of the world for archaeological digs and brings back an occasional rug.  The one my dog chose to pee on was the smallest and I think that it was the most gorgeous.  Tim just graciously cleaned it up.  Another prince. 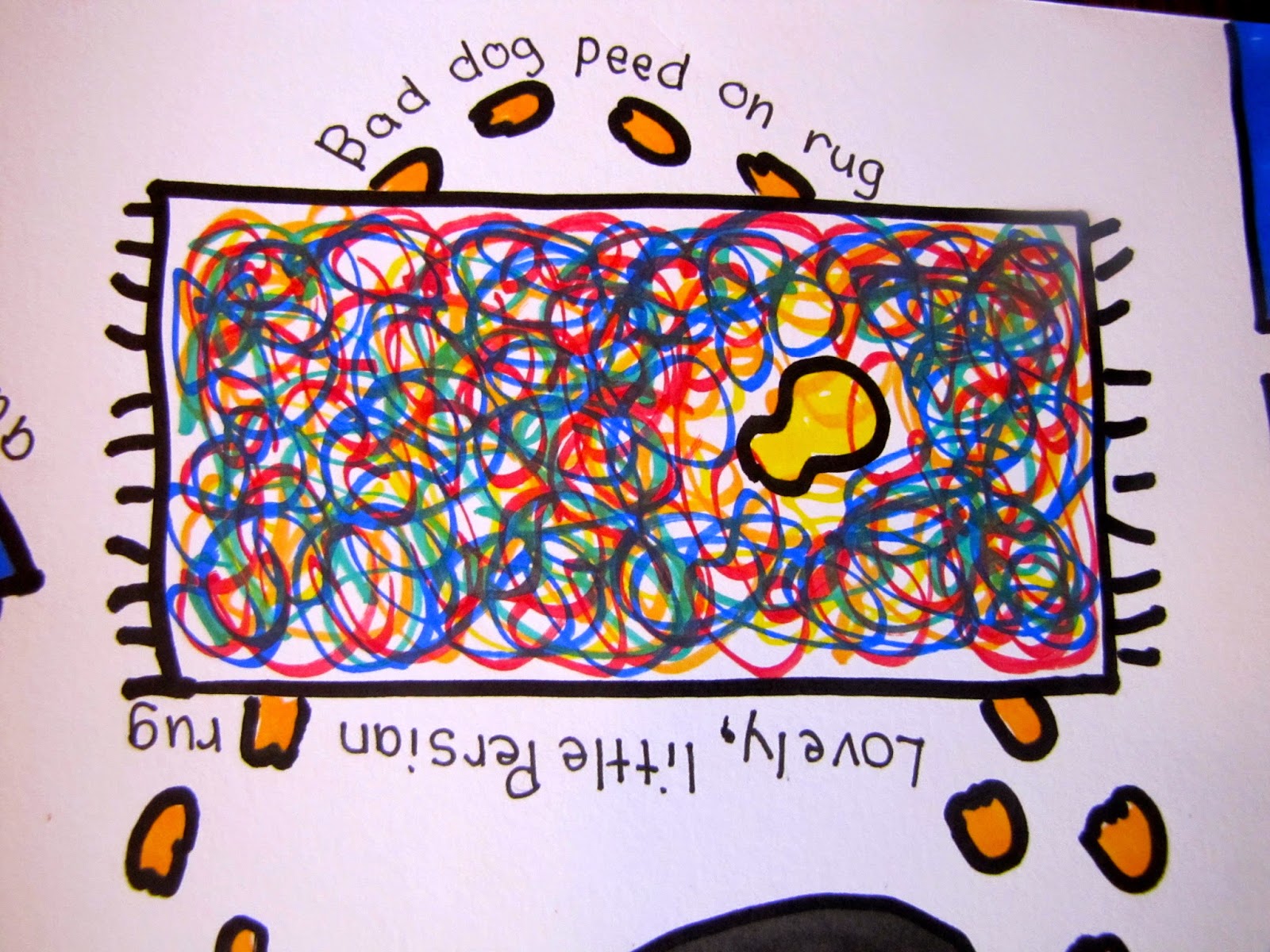 Have you been waiting for the burning underwear tale?  Me too.  I burned my hand grabbing the smoldering pile of underwear from the microwave and swiftly throwing it into the bathroom sink laughing hysterically all of the way.  Haven’t you also heard of people drying their socks and stuff in the microwave?  The idea seemed so ordinary.  I had been camping in California campgrounds for some days with the bathrooms locked due to the statewide drought.  Sticky from the sea air and salty water, I finally decided to head to a motel for a night.  A sweet motel receptionist granted my wish and gave me a cottage amid gardens instead of the motel room, which I had called about.  “Same price.” she said.  I even had a little private patio for pup and for hanging underwear.  Off I went to dinner on the beach when the fog rolled in.  By morning my underwear hanging out on the line seemed even wetter than the day before.  That is when I remembered the microwave trick.  And trick it was.  Thirty seconds.  Nothing.  Thirty more and there was a little steam.  With breakfast-making beckoning, I rashly gave the underwear two minutes. The smell of smoke alerted me to the urgency of checking the microwaving underwear.  The grey smoldering pile of newly purchased underwear was tinged with small rings of fire.  Faster than a sword's swoosh; I swept the underwear out of the microwave and into the bathroom sink.  At that moment the fire alarm sounded the alert to the village.  Now my cottage was actually a duplex, which had occupants at home next door.  But they simply ignored the warning, possibly chuckling about the likelihood of it just being someone burning up their underwear in the microwave.  I opened doors and windows, turned on the fans and took the underwear disguised in a brown paper bag to a distant garbage can.  I was the rescuing princess in this story… and the ass. 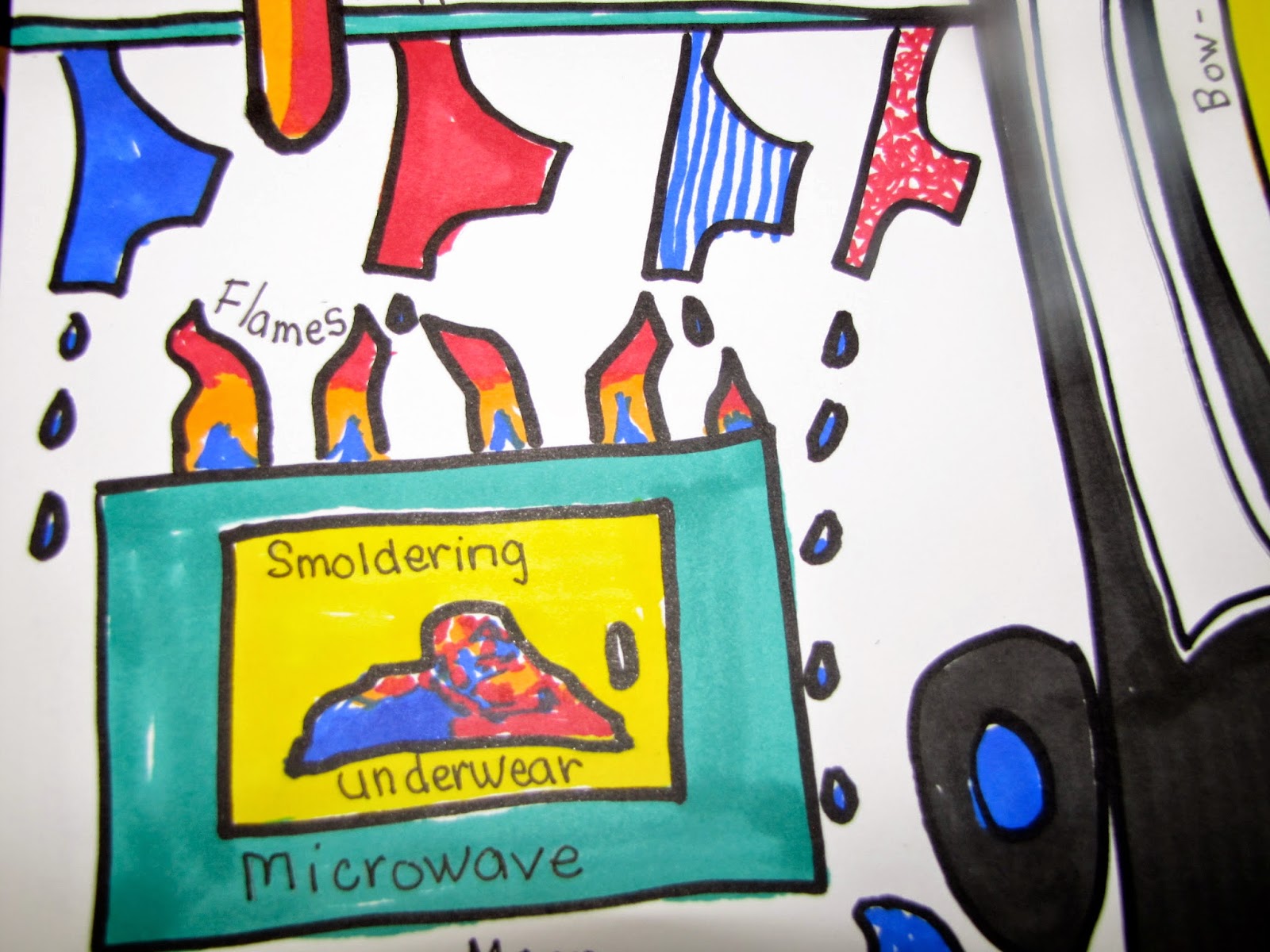 Postscript.  Embarrassment is spelled wrong on the poster of:  A Travelogue of Embassments and Near Disasters.  (This is a full disclosure post.)