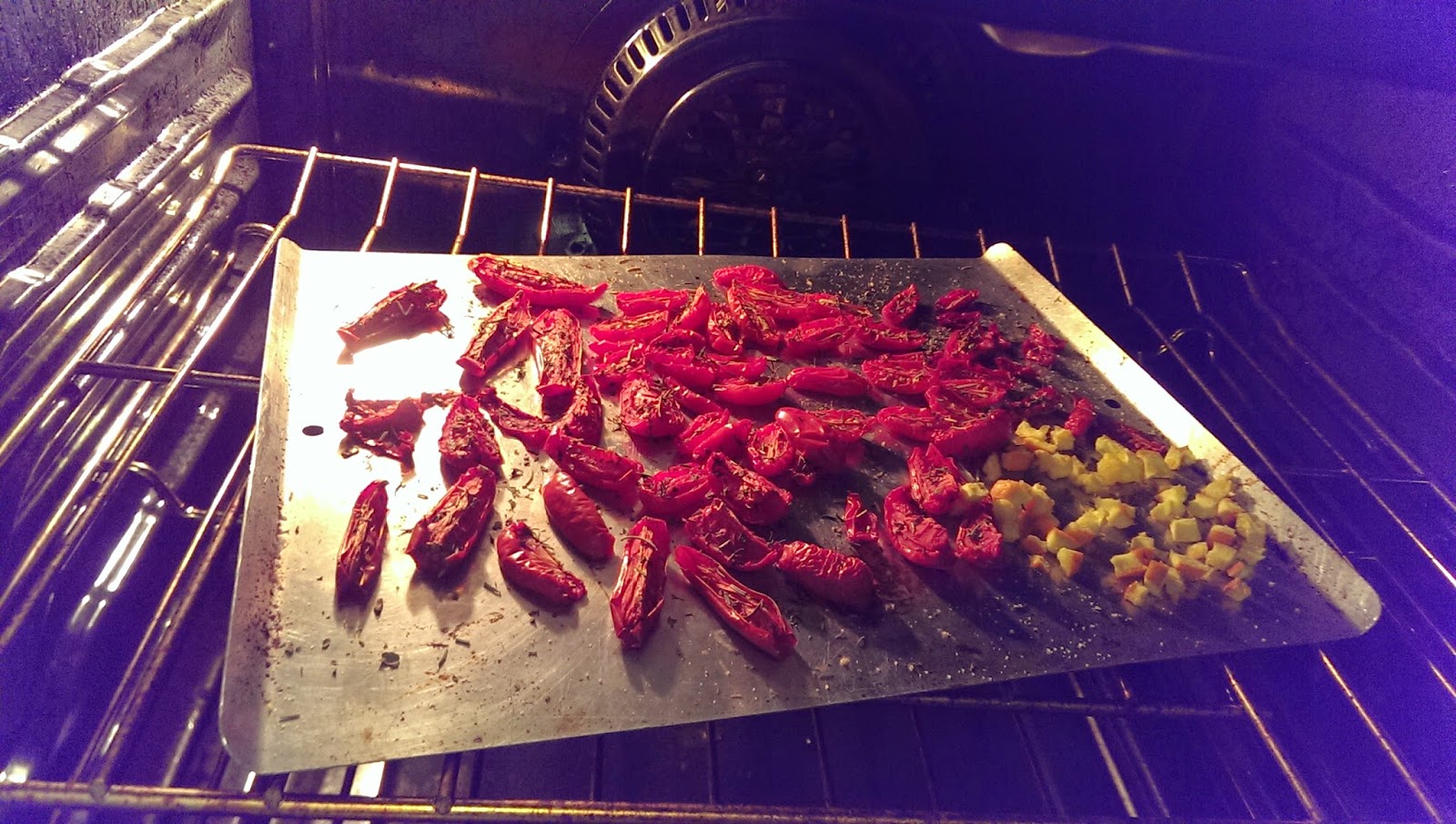 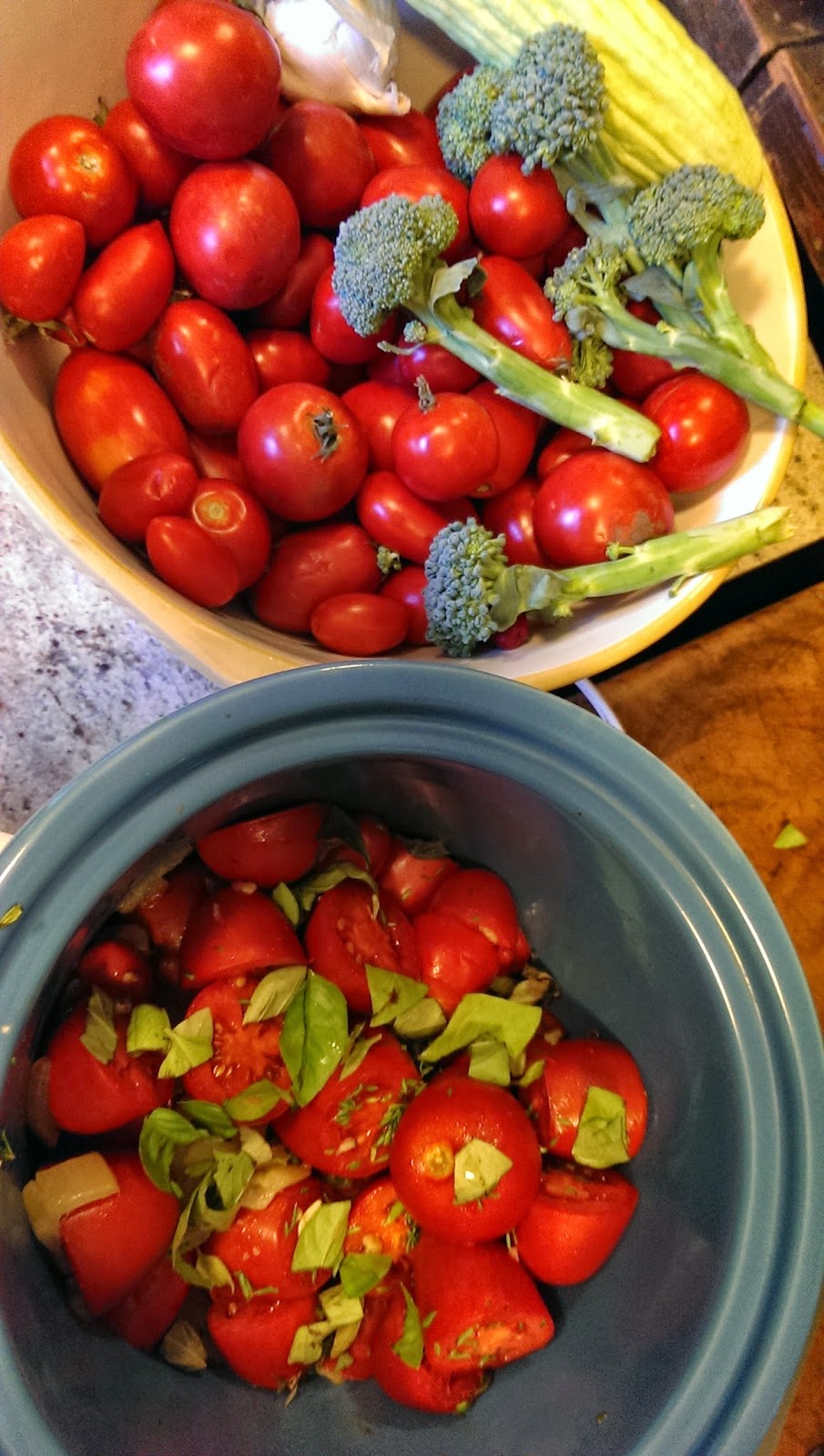 The fifties and sixties era of cooking was all about the innovation of vegetables cooked in plastic pouches and boxed cake mixes.  To the latter you added water and an egg.  I didn't learn to cook.  When I was selling a cake for a school fundraiser an older lady asked me if my cake was homemade. I was genuinely puzzled at the question.  Of course it was homemade.  I made it at home.  Only some years later did I realize that
cakes could be homemade or in other words "made from scratch".

"Made from scratch".  In the 1920's James Joyce used this term to mean starting from nothing.  (Previously it meant to start from a line scratched in the dirt in the games of cricket and boxing.)  Much of my cooking this week literally started from nothing or from scratch.  My garden has few tomatoes, no plums or nuts.  The boundaries of my yard are the scratches in the dirt.  This is where I started.

Crossing the boundary to my east is one of the best gardens of the block year-in-and-year out.  This is due to Bob, gardener extraordinaire at age 80.  Even his vegetables that come up from the previous year's seeds are better than mine planted this year!  He always has an extra bounty.  The tomatoes in the yellow bowl and in the crock pot making pasta sauce are mostly his and a few from the neighbor to my west.  Phil to the west is a new neighbor.  He planted his tomatoes directly into bags of planting soil and leaned them against the fence.  Phil told me to pick whatever came through the fence and I have.

Years of cooking from tomatoes from scratch have taught me a thing or two.  I start by slicing Roma tomatoes in half and spreading them on a baking sheet.  Then I coat them with garlic salt and the herbs oregano, rosemary and basil from my garden.  I bake them for hours at 220 degrees until they have begun to dry around the edges, but remain slightly soft in the middle.  These little bites pack a powerful zing of sweet tomato and salty herbs.  I eat many of them just as they are, dumping others into egg dishes, pasta and onto sandwiches.  The remaining get frozen for use in the winter.

Back on the top photo you can see something piled in the corner of the baking sheet with the tomatoes in the oven.  This is orange peel dusted with sugar.  I'll save these for scones or pancakes made from scratch.  The orange peel was left over from making plum orange jam.  The plums came from my neighbor at the end of the block.  Mo has generously shared her plums.  So far I have made a plum pie.  The plum orange jam was a new endeavor. From scratch.  Halved, cooked for 10 minutes on simmer four different times and then sealed in jars in a hot water bath was all new to me.  I added lots of nutmeg.. only because I know this makes a plum pie sing. 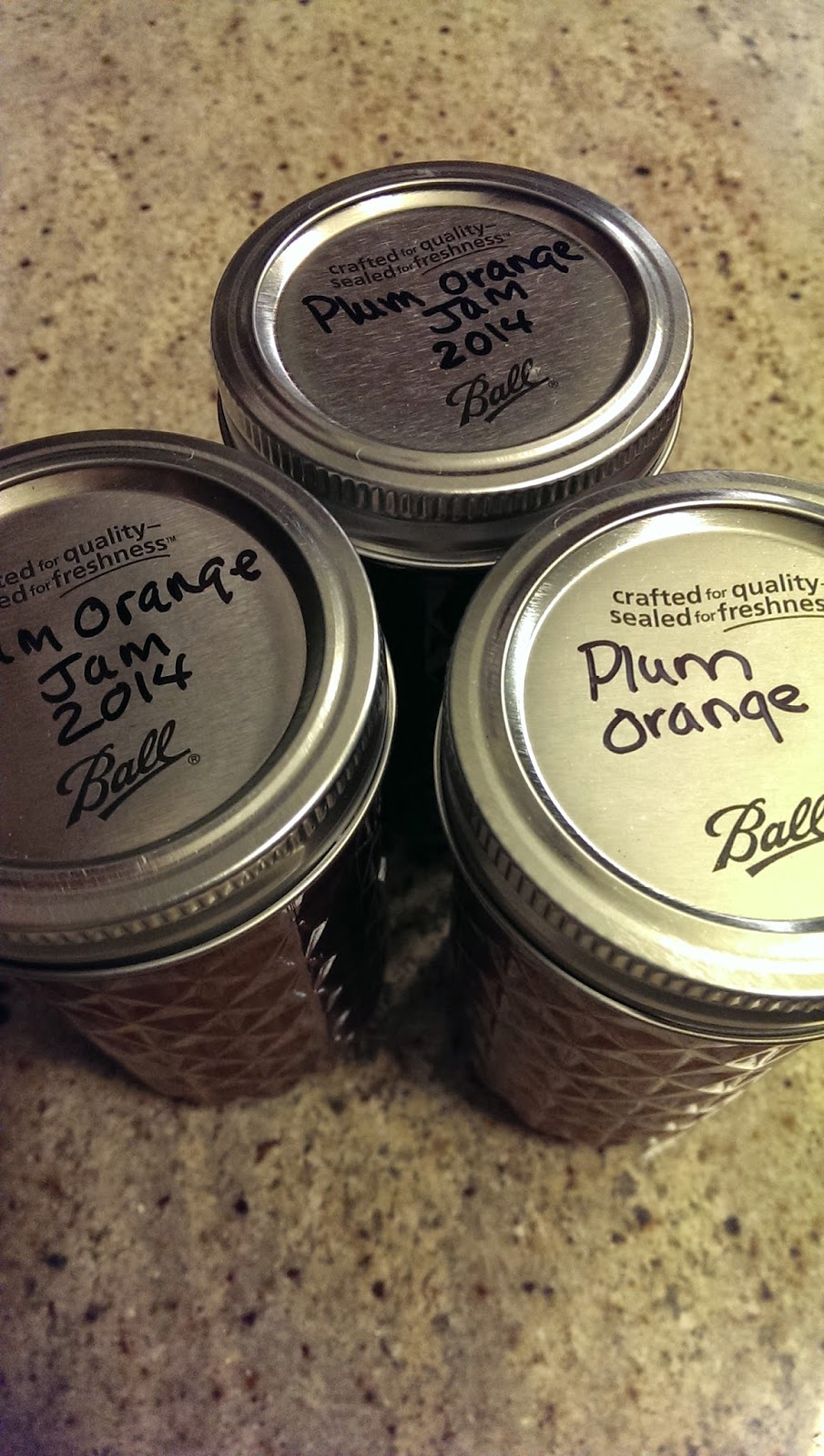 I am beginning to think that I should say that I cook from neighbors instead of from scratch!  My neighbor Judy, Bob's wife, and I confer often on cooking.  She worked in a professional kitchen making pies and salads.  She knows so much more than I do.  We laugh when we share recipes and say things like, "Put in enough nutmeg until it looks right."  Really?  Cooking from scratch means cooking with friends. 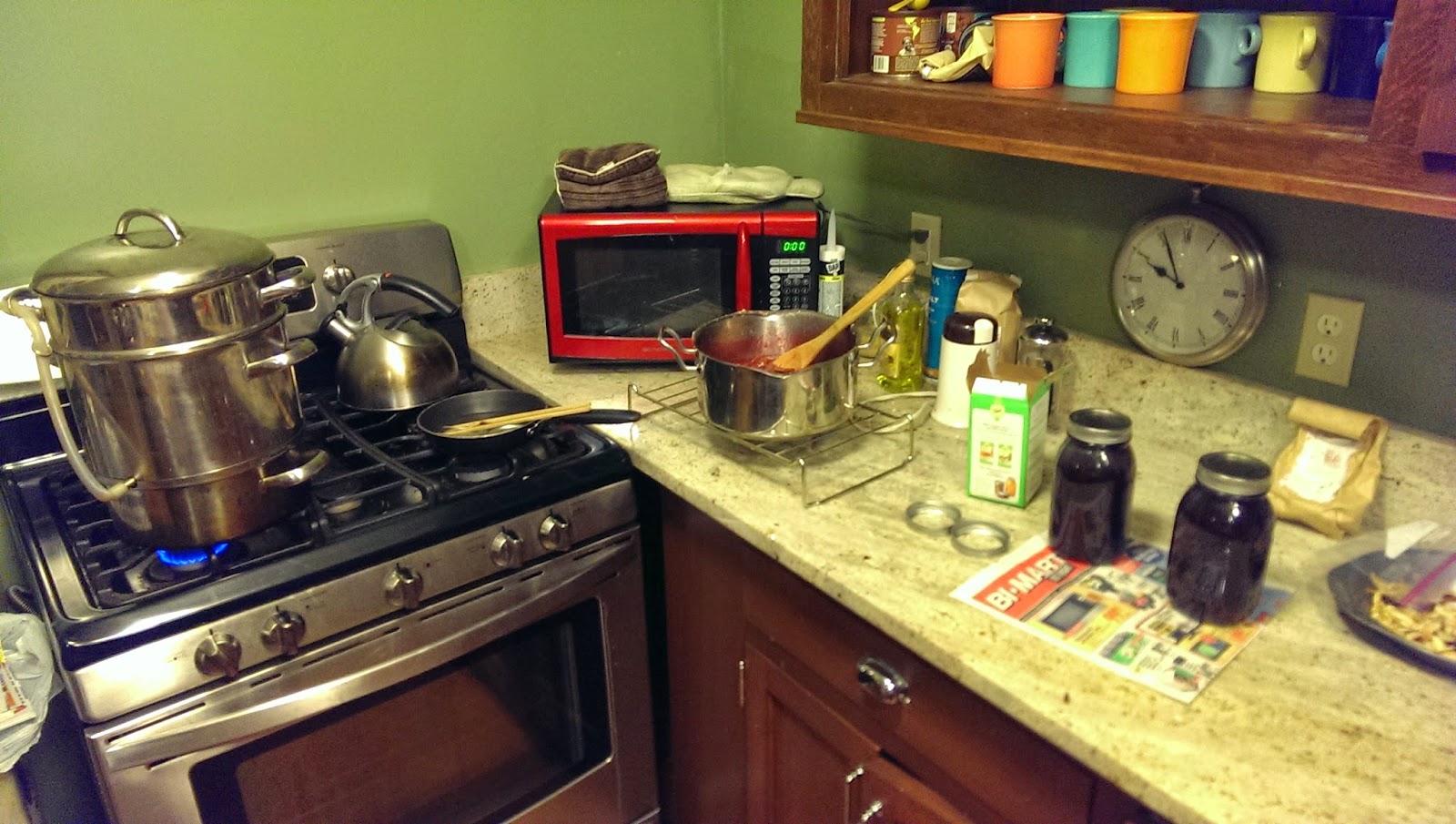 One can't be a slacker this time of year.  The photo on the left shows the three-stage steam juicer making the first batch of grape juice, the pot with a spoon in it is the plum orange jam resting between cooking and on the far right next to the grape juice jars are dried Walla Walla sweet onions on a tray.

On the same day that I took the photo above, I gathered nuts before a rain.  The filberts are as usual hugely bountiful.  Bob and I give them away and keep what we need.  I add filberts to yogurt and top them with maple syrup in the winter or chop the the nuts and put them on pies.  Last year I made up a new recipe.  I saute filberts in butter and olive oil adding garlic at the end and serve them over fried potatoes and top them with blue cheese.  This year I am thinking of topping them with an egg too.  Breakfast from scratch from nuts I gathered along the line scratched in the dirt.  Life from scratch, one neighbor, one fruit, one nut at a time.  Homemade. 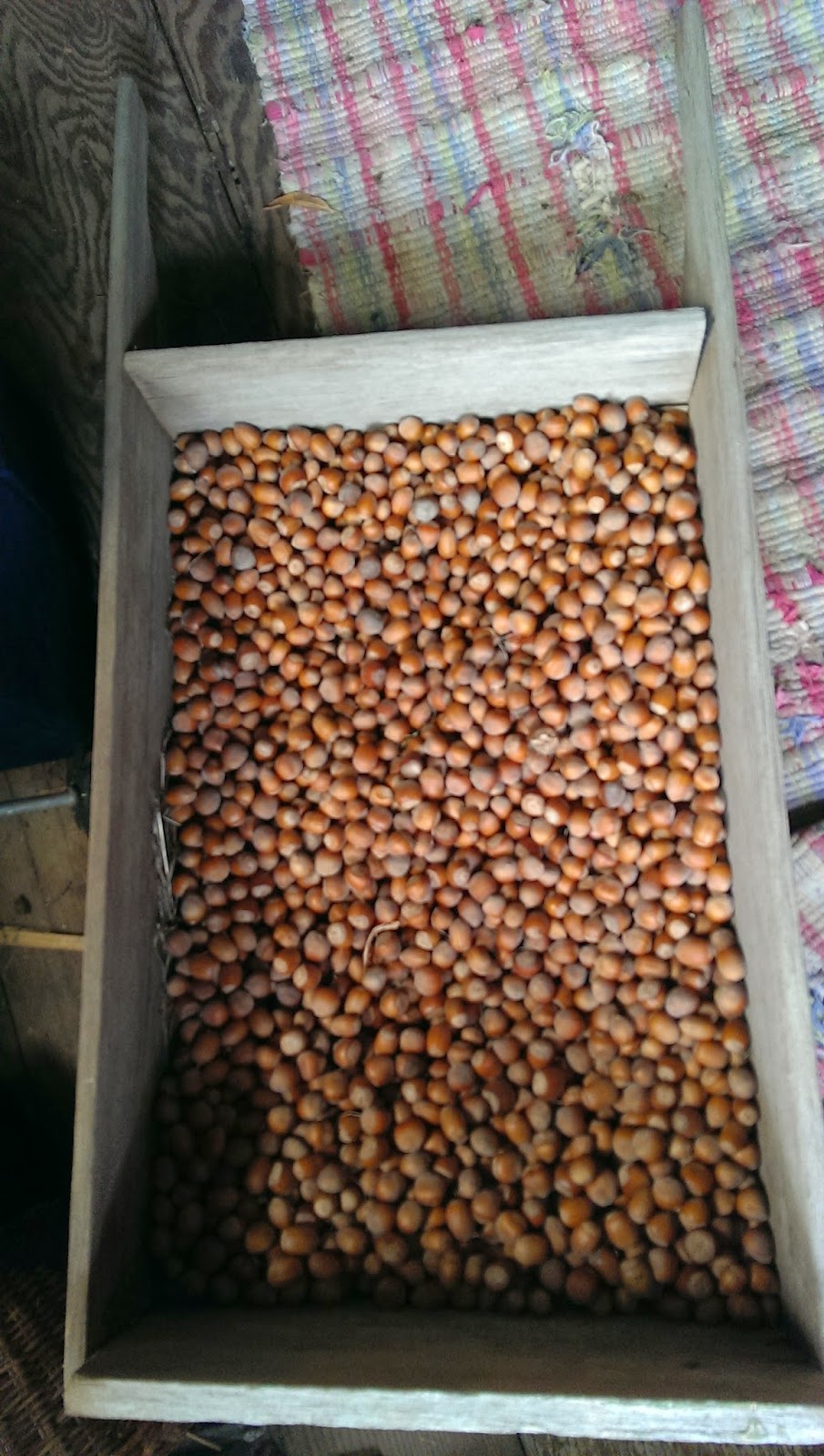 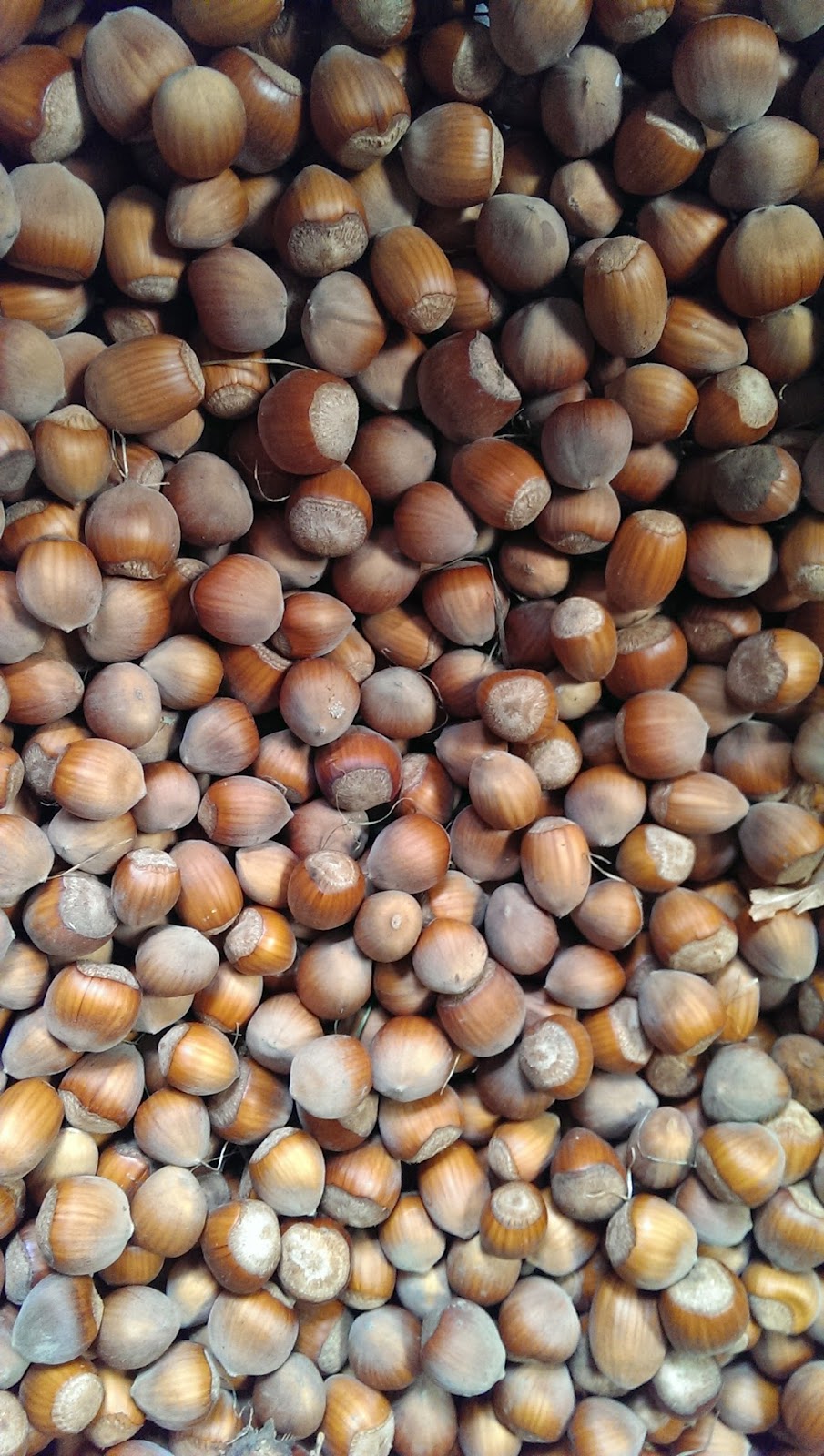