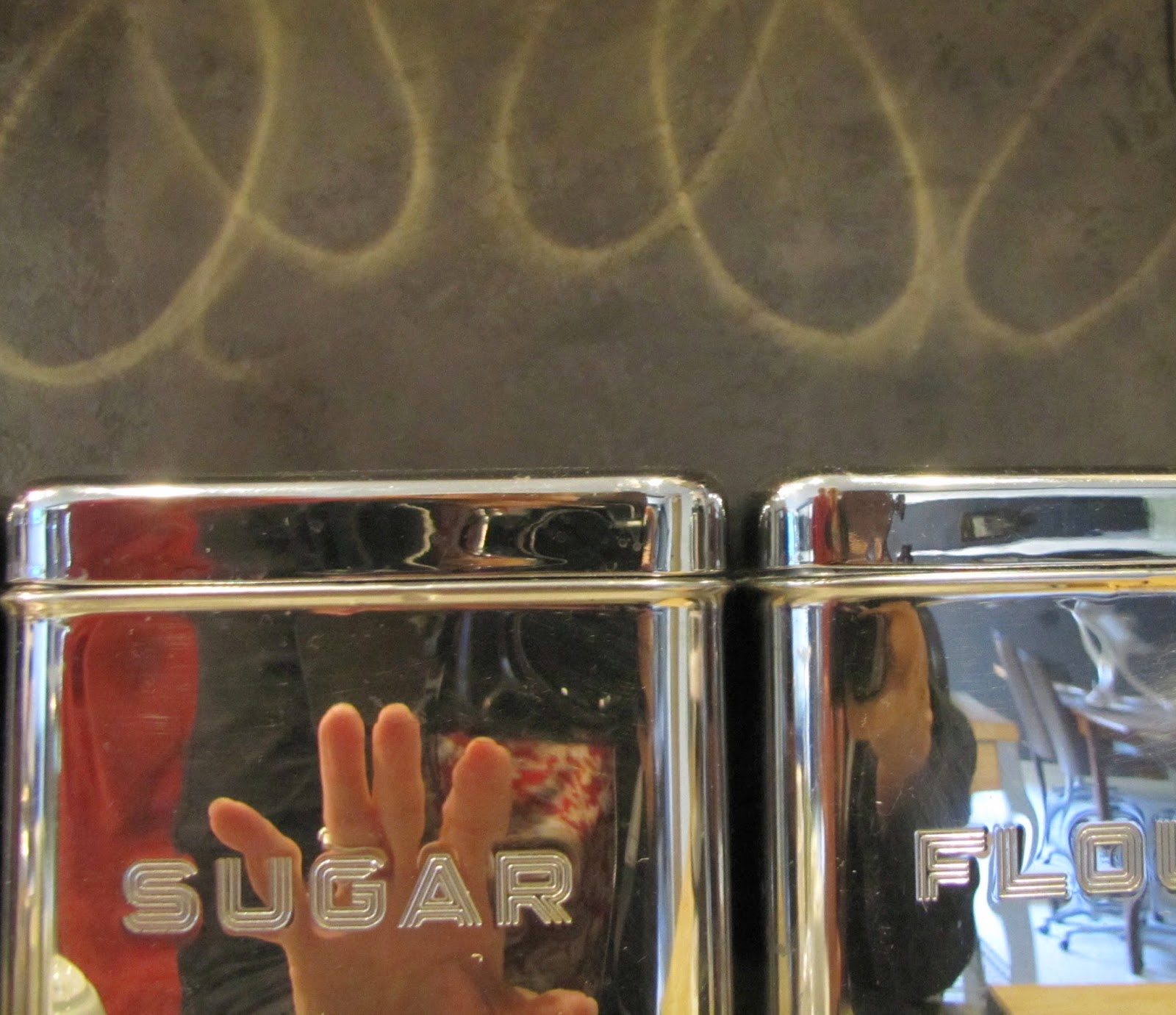 There was a spill of images.  Loops of light were reflected on a gray wall.  The edges of mid-century canisters gleamed and shimmered in "The Atomic Ranch" kitchen. The lettering on the front of the canister wrote itself across my mind and then my fingers reached for the word that seemed to be speaking in a southern accent.  "Come here, Shu-gar”.  This spill of images noted sequentially over a dozen angles produced one of those pleasurable "ahhs", as all of the elements were captured in one shot.  I like tumbles of opportunities non-existent in a prior moment.

The city of Portland in Oregon tumbles out ideas on a scale that seems uniquely it’s own, a city with a conceit for being frugal and a delight in being indulgent.  The contradiction of these virtues is the ground on which their ideas roll.

Take those mid-century canisters.  They live with mid-century lamps and rough practical concrete pillars.  (The peaches are mine.)  Portland’s frugality has made recycling and building on a budget stylish. 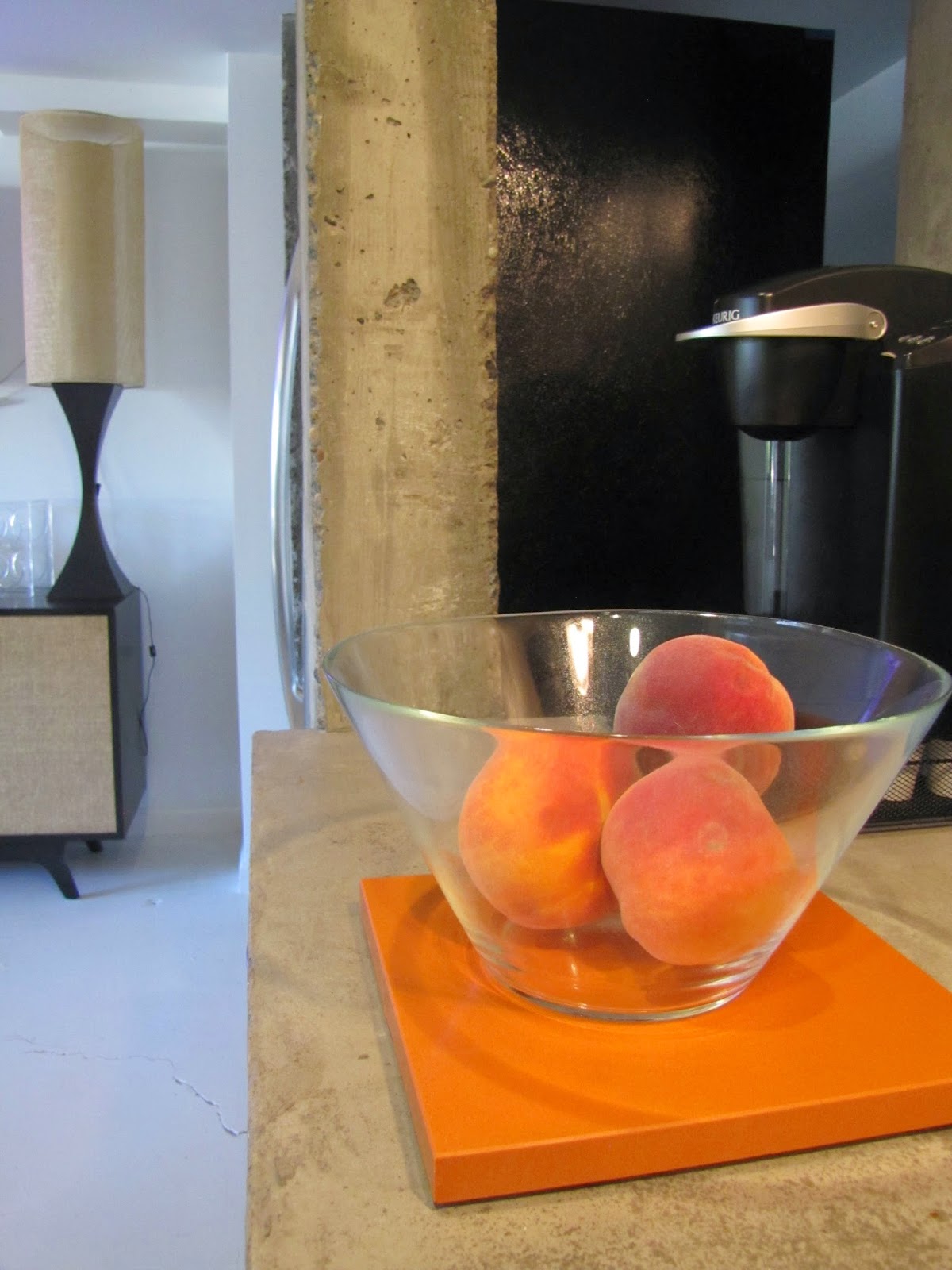 Frugality in furnishing a home in a period style is a slow, but indulgent way of shopping.  While prowling the city's second-hand warehouses and antique shops, I have found myself grinning at the sensual pleasure of piles and ofttimes the reward of finding a gem in a jumbled dusty corner.  Hippo Hardware used to be scary, dirty and worthwhile. 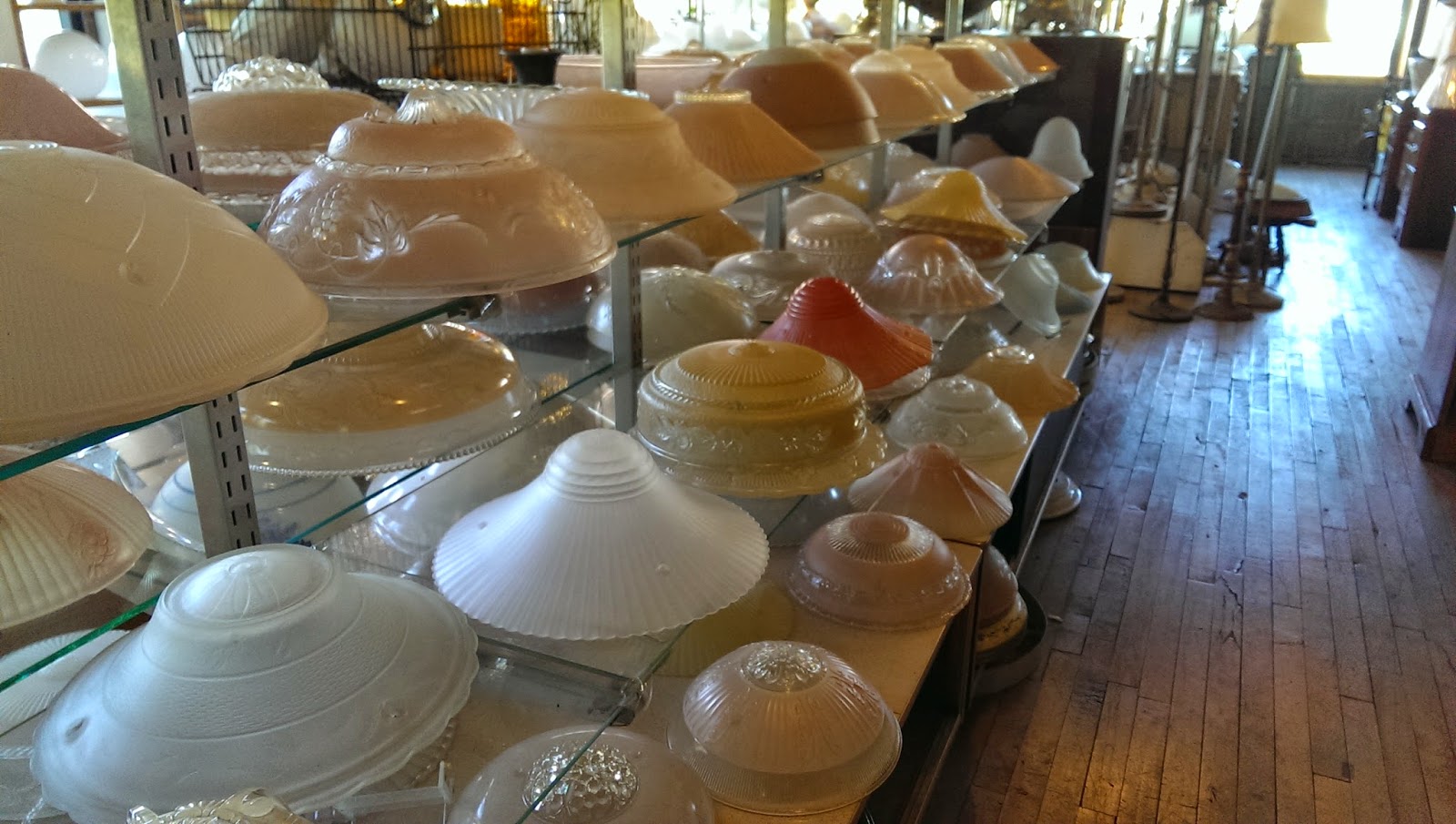 Now it is worthwhile without the fright, dusted lampshades piled invitingly. 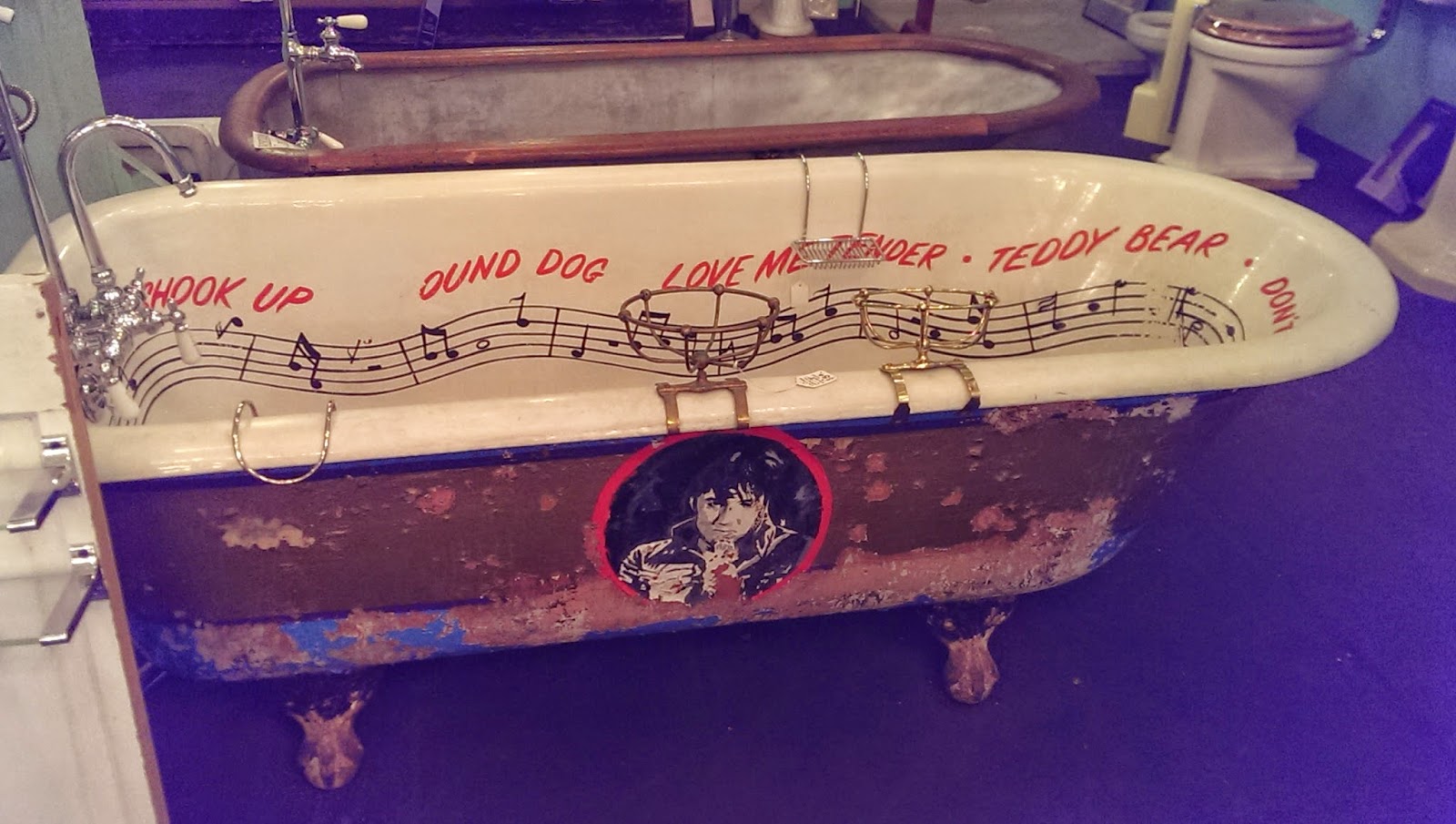 Where else can one shop and find such humor as in this Elvis tub?  I can rush about a store with all new stuff and never laugh, never indulge myself in fantasies.  Here I am shopping for a replacement glass shelf at Hippo Hardware and I am given so many choices by the helpful attendant that I decide to come home and do some more measuring.  Slow down, take my time.

When Portland can boast of having the largest used bookstore this side of the Mississippi, a multitude of house renovation companies and one of the best ratings for bike use for commuting in the country, these are reflections of frugality and indulgence in action.  The indulgence comes with the intensity with which Portlanders pursue their habits of frugality and the pleasures that come from living slowly.  Money saved by commuting by bike, buying used molding and cooking from scratch, frugal habits one-and-all leaves resources for splurging. 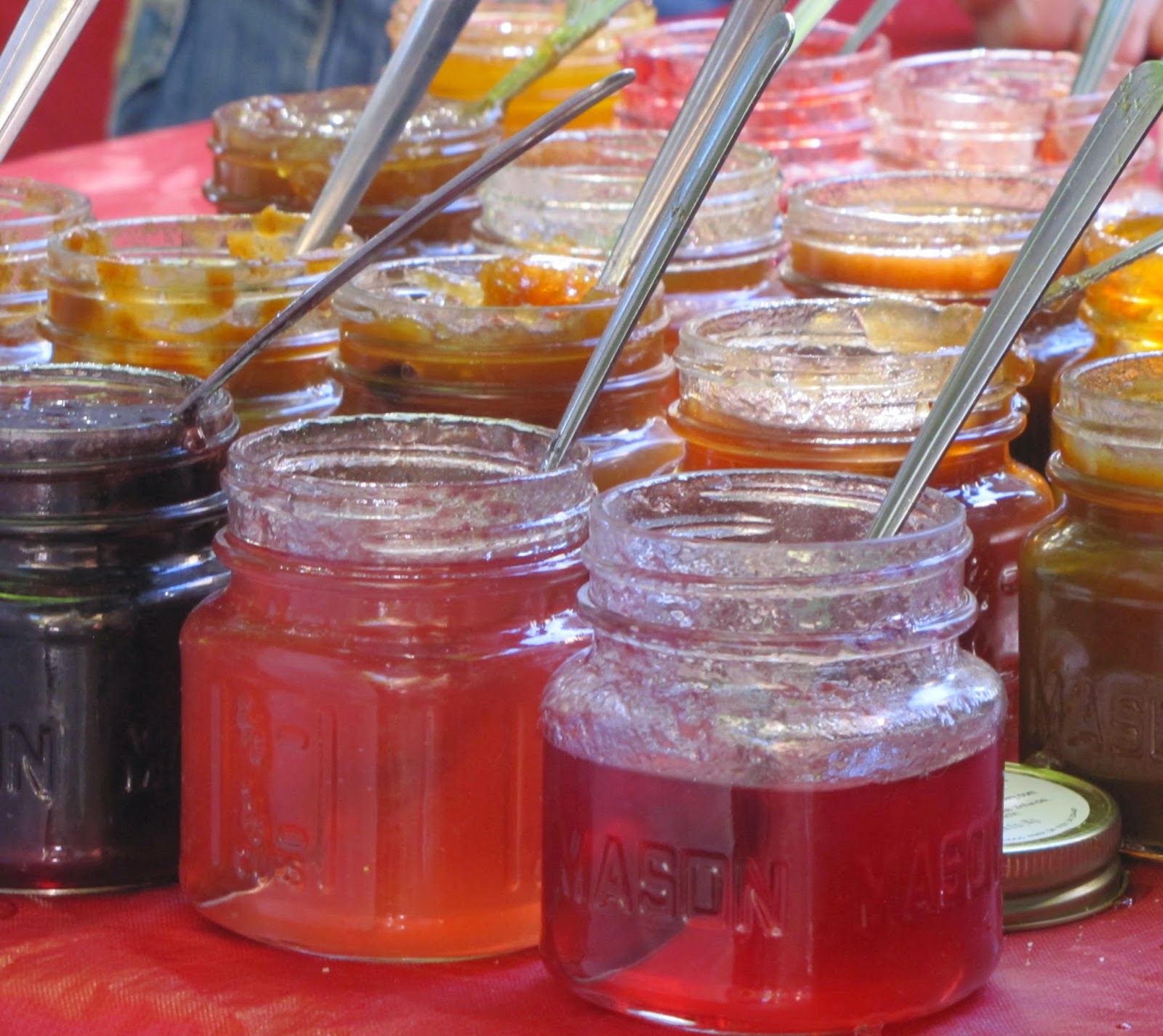 In a time when canning and making jelly at home was on the wan, Portland just kept cooking from the garden and expanding its farmer market.  The plethora of fresh fruits and veggies inspires home cooks and  restaurant chefs.  One can indulge oneself eating out and eating well.  These are images from the Saturday Farmer's Market on the Portland State Campus. 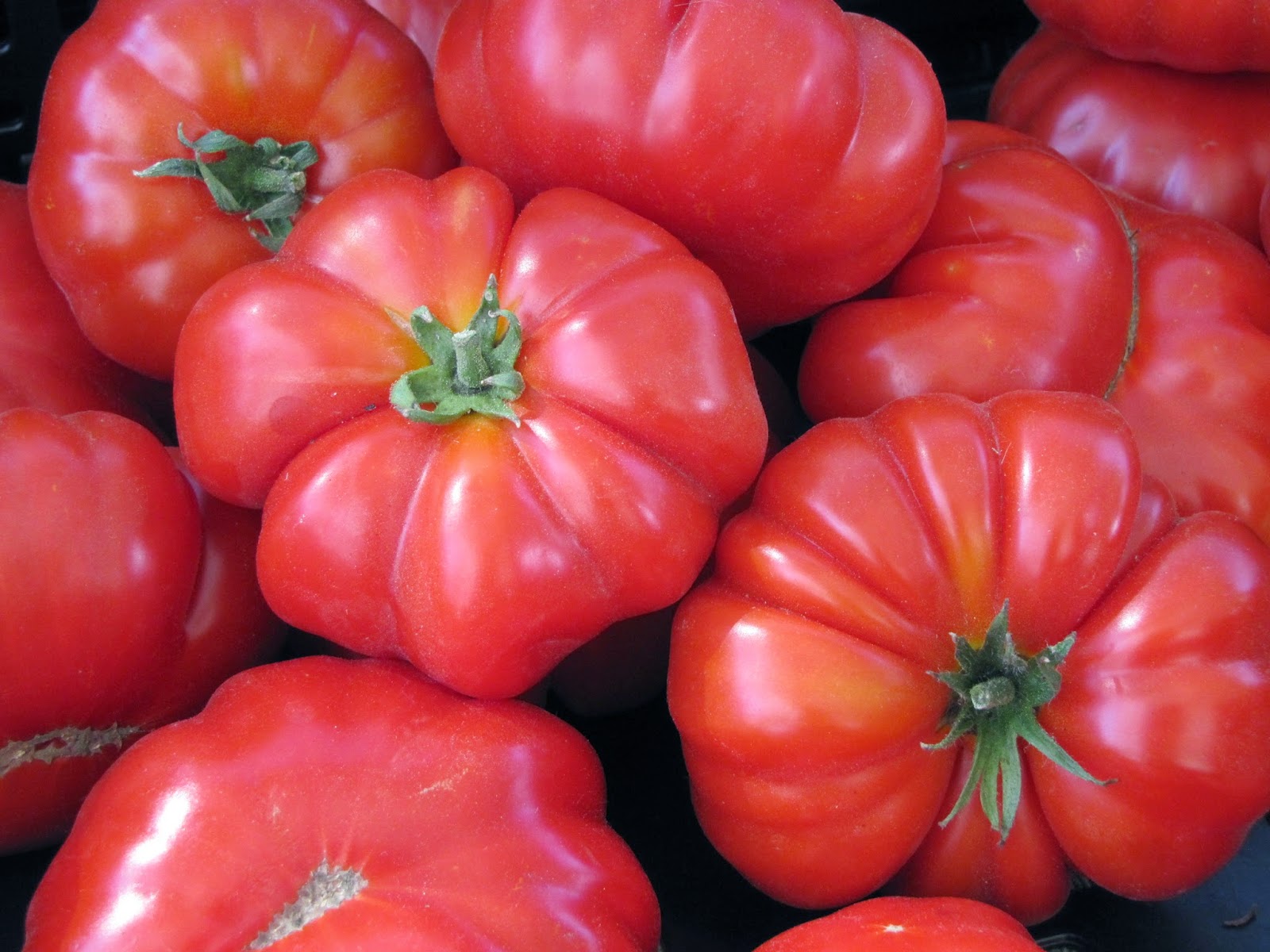 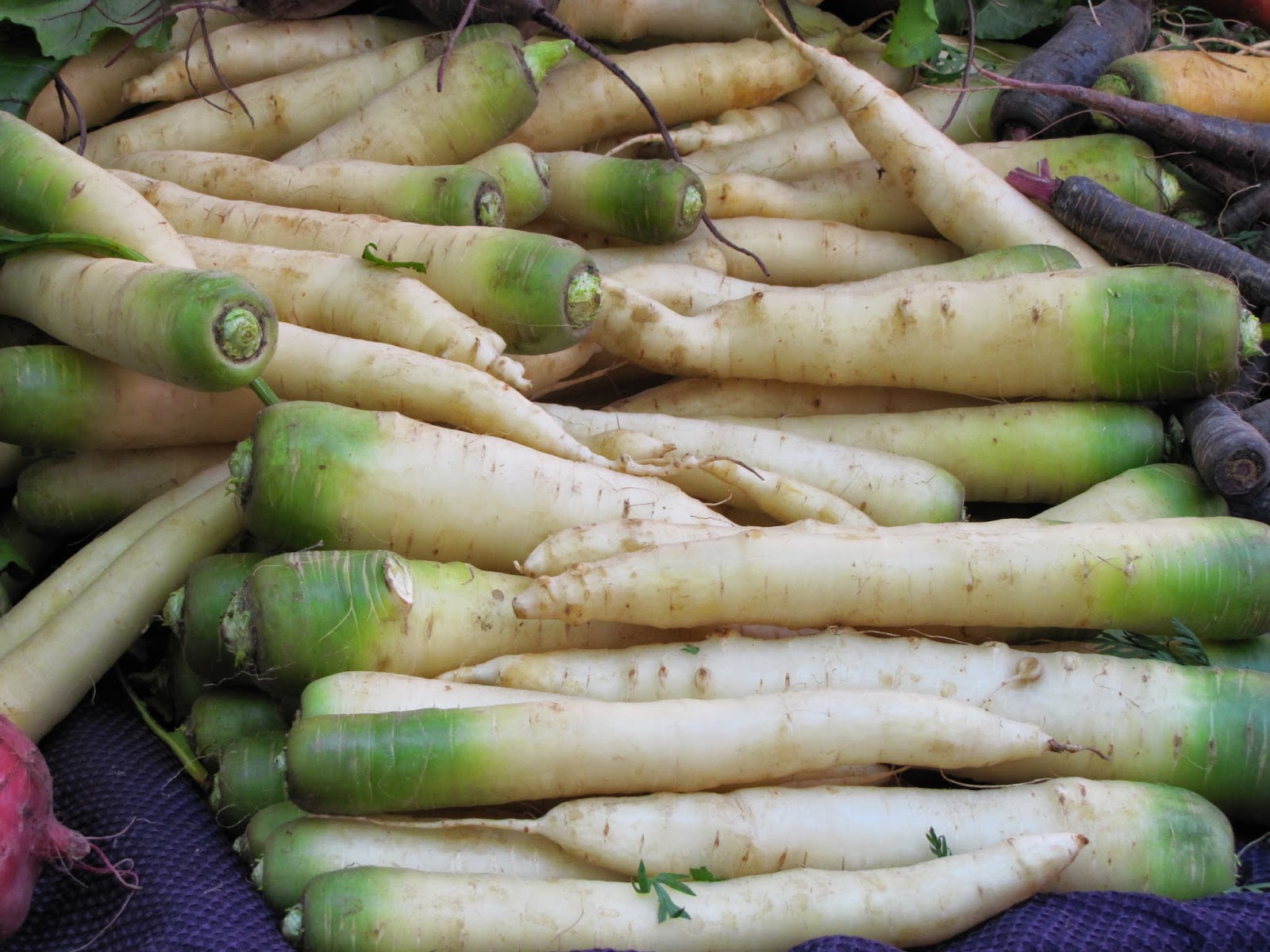 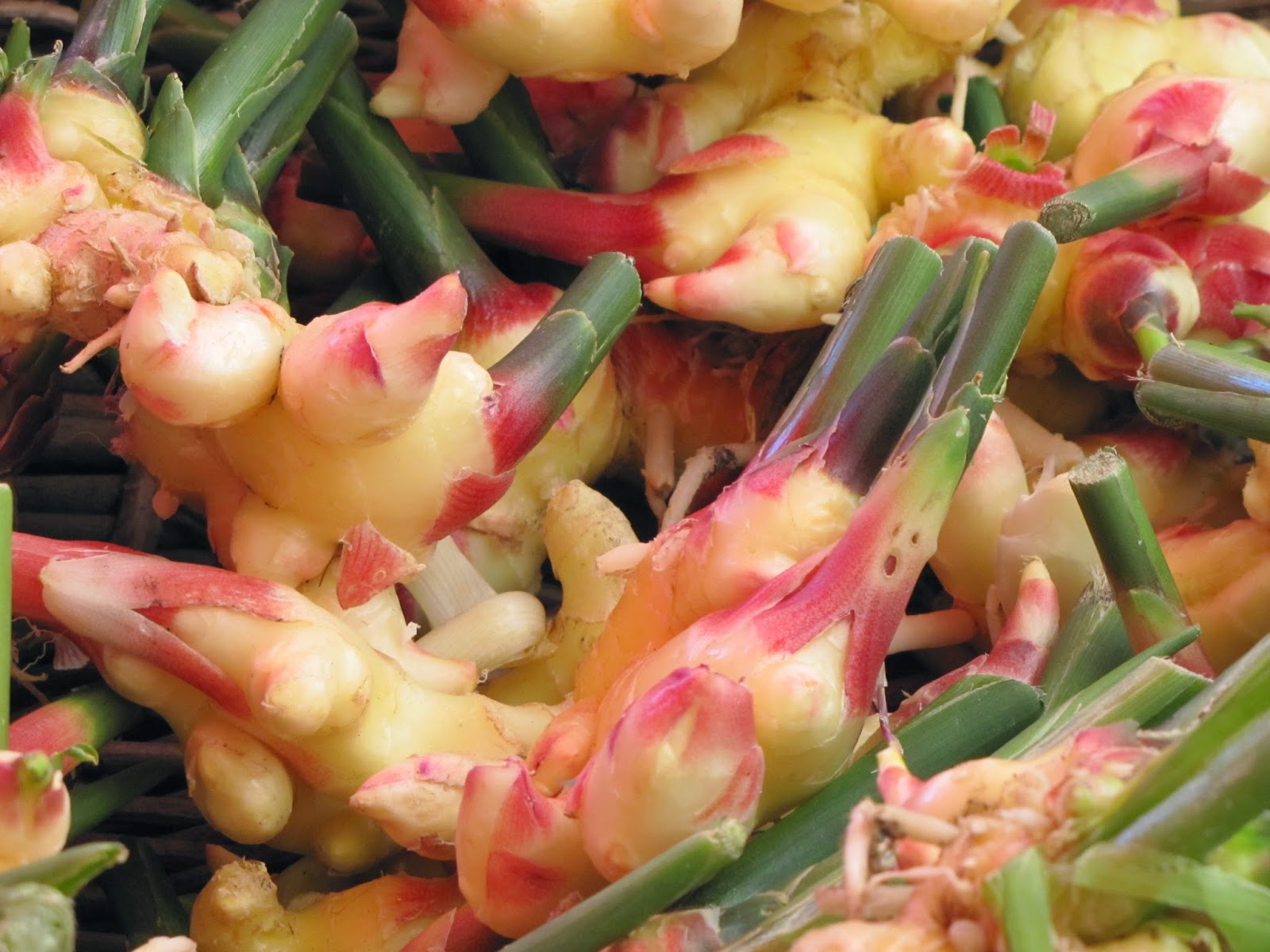 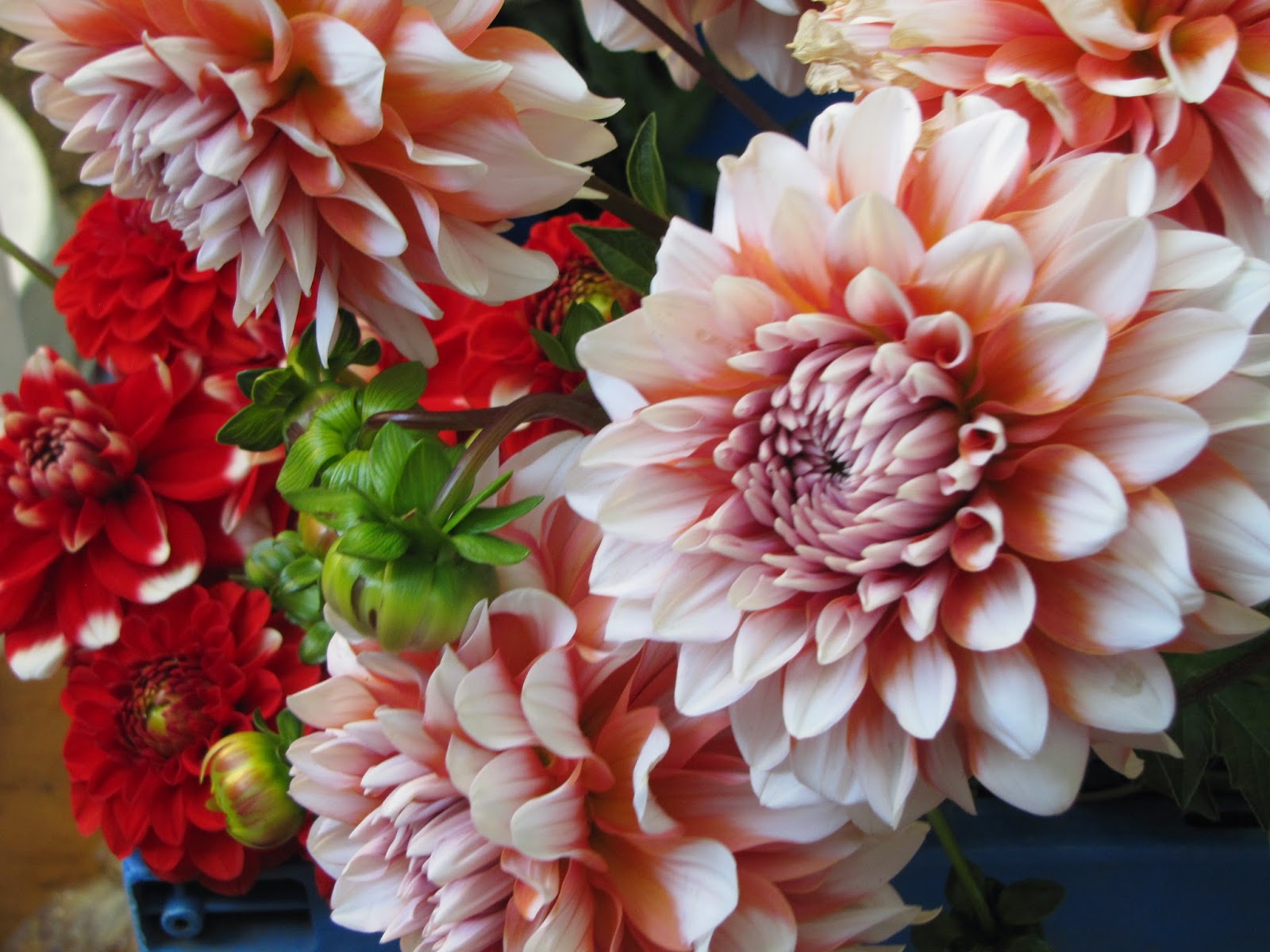 As I cross Burnside Bridge I pass the homeless sprawled on the sidewalk waiting for the mission to open so that they can drag their belongs in for a night.  They have been there for years.  Some may be the same folks or not.  They are the epitome of frugality, their few possessions often hauled in a single grocery cart.  The sight is a confusing one.  Portland has that passion for indulgence and the admiration for frugality.  Watch Portland.  The city has just begun exploring options for building tiny homes and micro houses for its homeless.  Frugal housing built to pleasing standards that lets highly independent homeless have a home.  Portland's answer to a social problem proffered with dignity, thoughtfulness and tinged with a social indulgence worthy of its traditions.  Portland may soon add "no homeless" to its list of accomplishments.  Frugal indulgence Portland style. 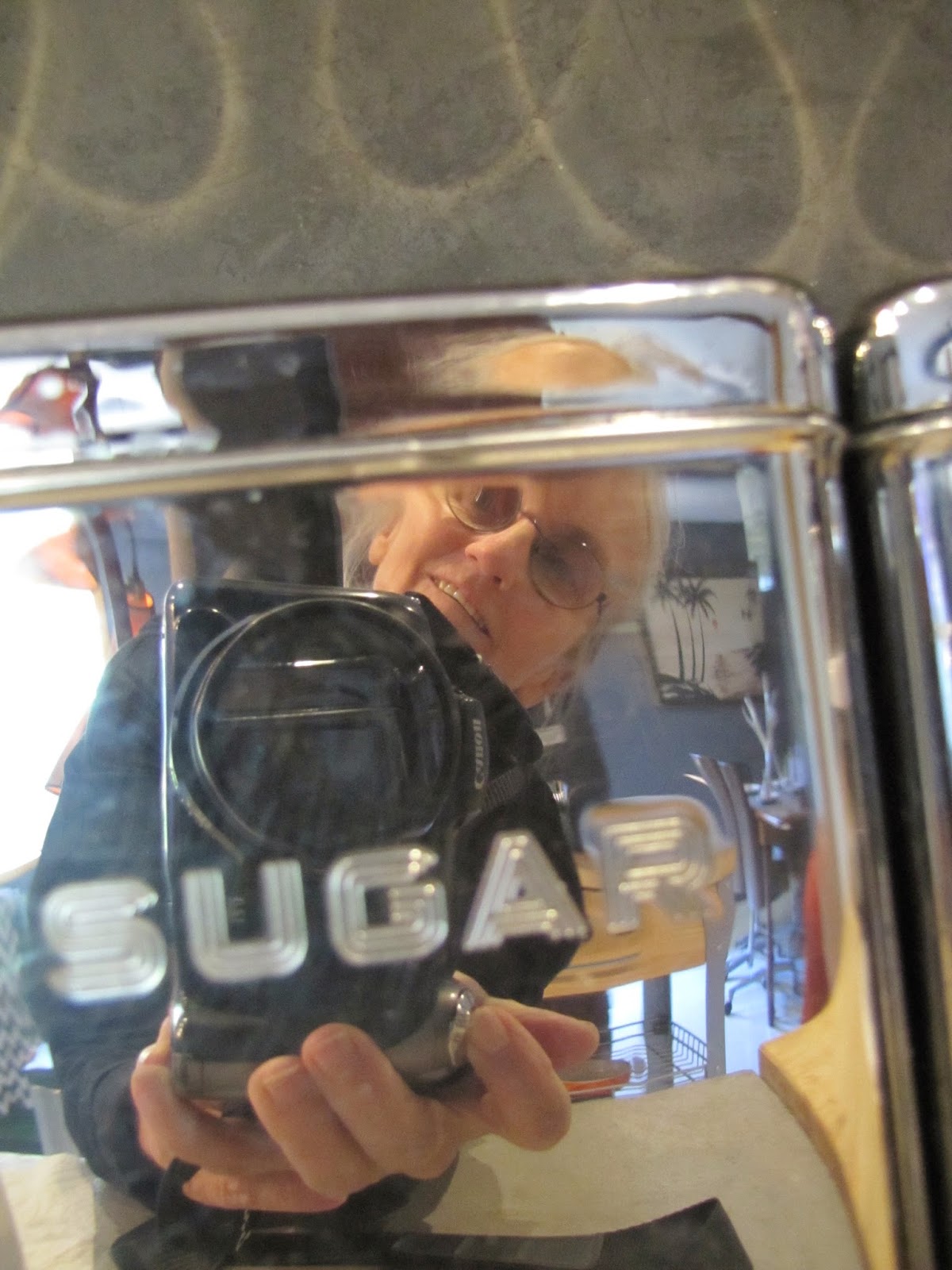