Reflections in the Windows


Tracking ancestors is like looking into a window's reflection.  You try to to peer past the image on the surface to see the reality of the place beyond, the facts that form a pattern of relationship.  The glass, the light, the time, the records and the lies distort the shapes within.  Getting closer brings some clarity, but at times you just can't get reality right.

You hope that in seeking your ancestors you will find a reflection of your own hopes, talents, quirks, health and graces.  You may find those qualities, but they may come back imperfectly, distorted by the stir of genes, much like the swirling imperfections in the handmade glass of the Session House window.  The Session House window reflects the church, the sky and the red bushes, but reveals little inside with clarity. 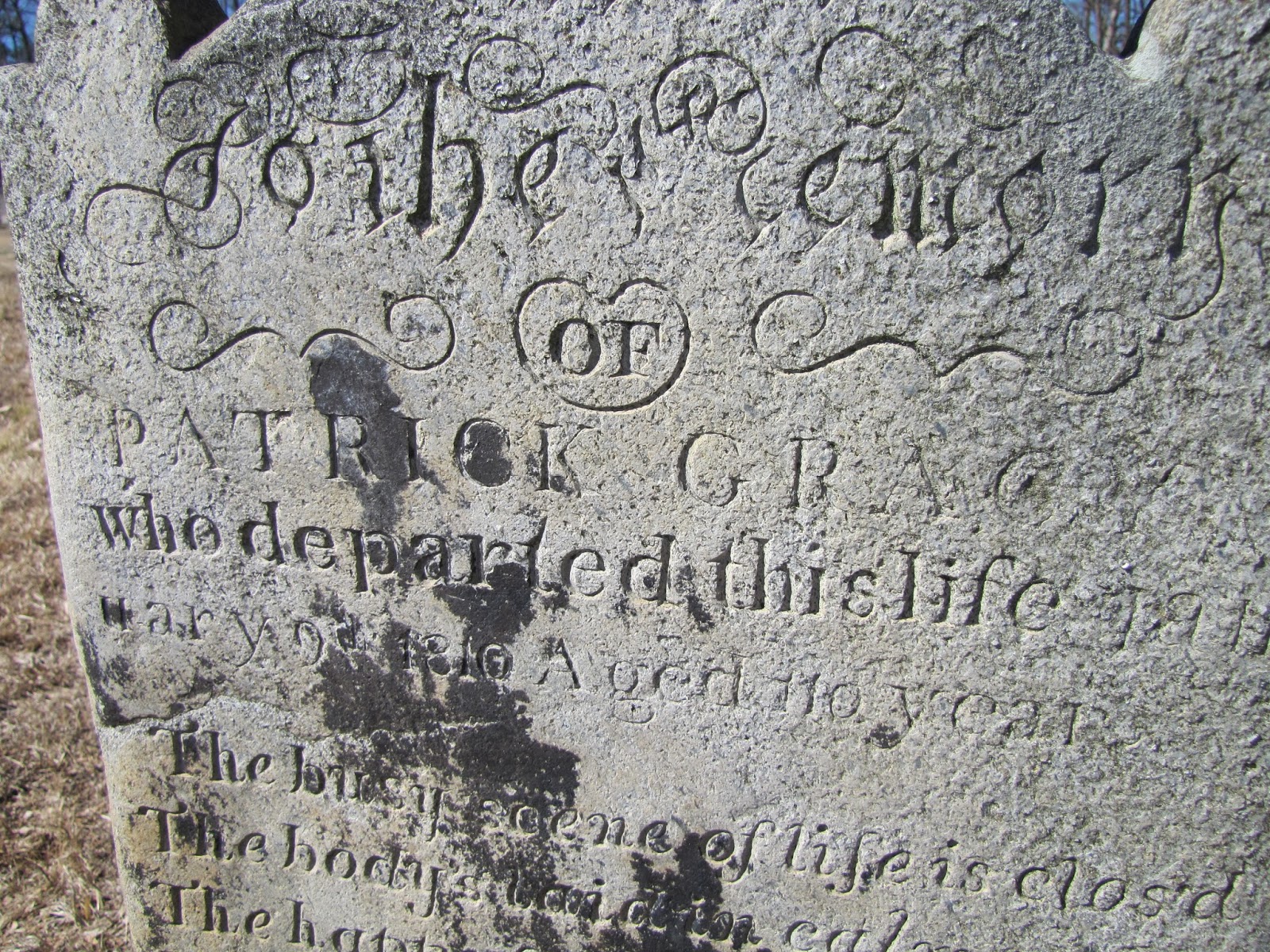 Patrick Gracey is my third great grandfather.  He is buried at the cemetery across from the Centre Presbyterian Church and it's Session House in Mooresville, North Carolina.  If you look at his stone carefully, as I did yesterday, you will see that it says that he departed at the age of 110 years. 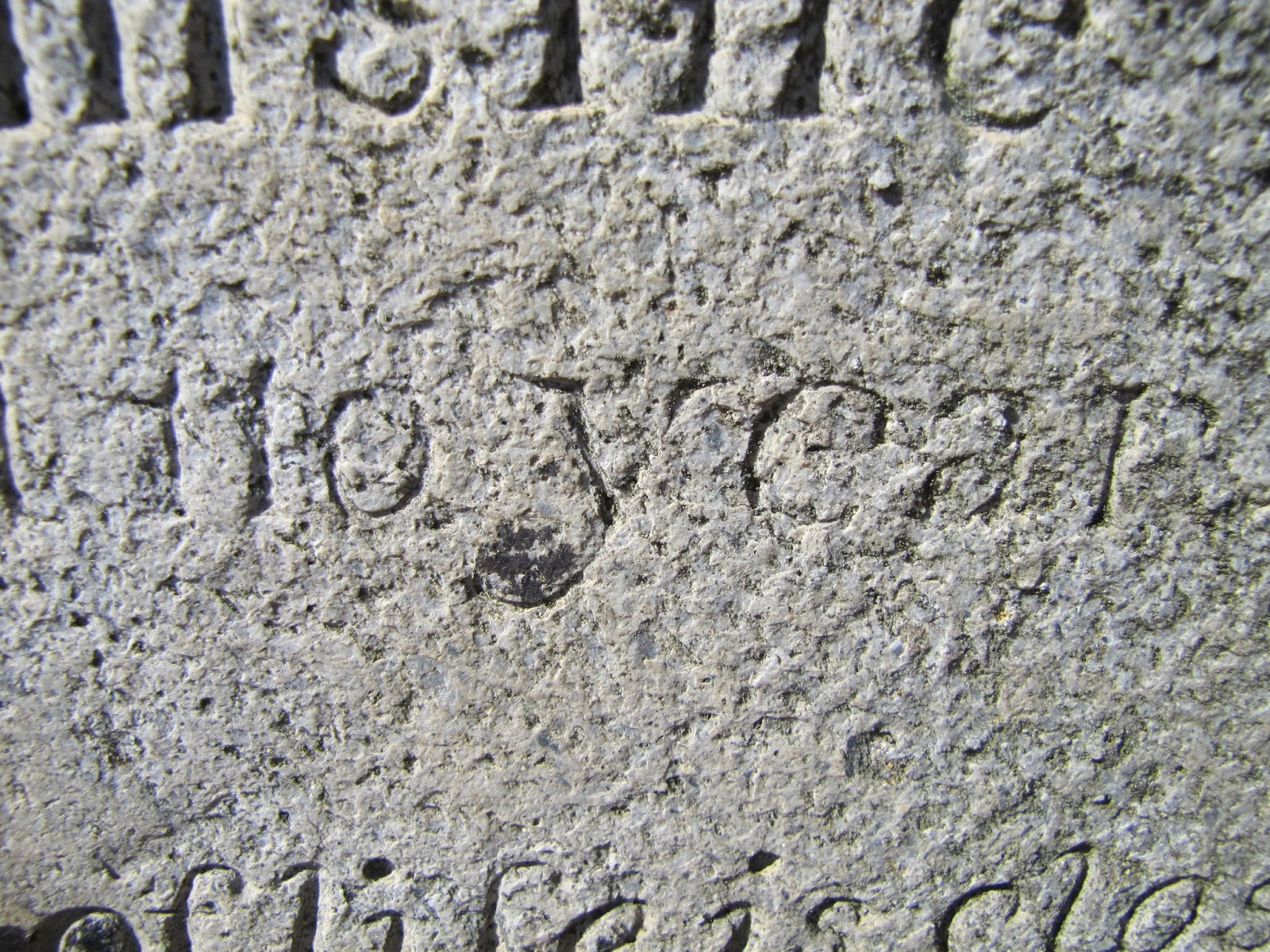 Remarkable.  The story gets better.  An account by his great granddaughter, Isabelle Templeton Alexander, relates "Patrick Gracey rode his horse a distance of seven miles... just six weeks before he died.  He must have been a remarkably strong man to have made the journey on horseback at such an advanced age."  (When I read this story I hope that his health will be my health.)

(My cousin, Iva, and I have been doing genealogy work together and visited Patrick's grave.  Iva questions that he was as old as his tombstone says.  The only proof that we have of his age is this tombstone.  Is it the right age or is it the good story?  He would have been about fifty-five years old when his first child was born.  We intend to look a little closer into the facts...)

Patrick was born in Northern Ireland of Scottish parents and came to this country in 1740.  When he died the church "had to take axes and cut out the trees to make a road to the graveyard, there being only paths."  His will describes him as a Planter with six hundred and forty acres.  He likely felled many a tree over his lifetime.  He had to be a hard worker.  (Maybe this reflects on my hard work.)

A man, a mythmaker, even in death.  When his sons and slaves carried his casket to the grave they had to cross a millstream.  "His son, Robert, was apparently high on peach brandy.  While carrying the body over the mill bridge, Robert fell in and would have drowned if a Negro hadn't jumped in to save him." A descendant, Lucy Pickard McKenzie related this story.  (Now we have a story that makes Patrick's "born in 1700 died in 1810 life" seem much less clear.  He was a slave owner and potentially the father of an alcoholic.  Searching ancestors doesn't promise a spotless reflection, mind you.) 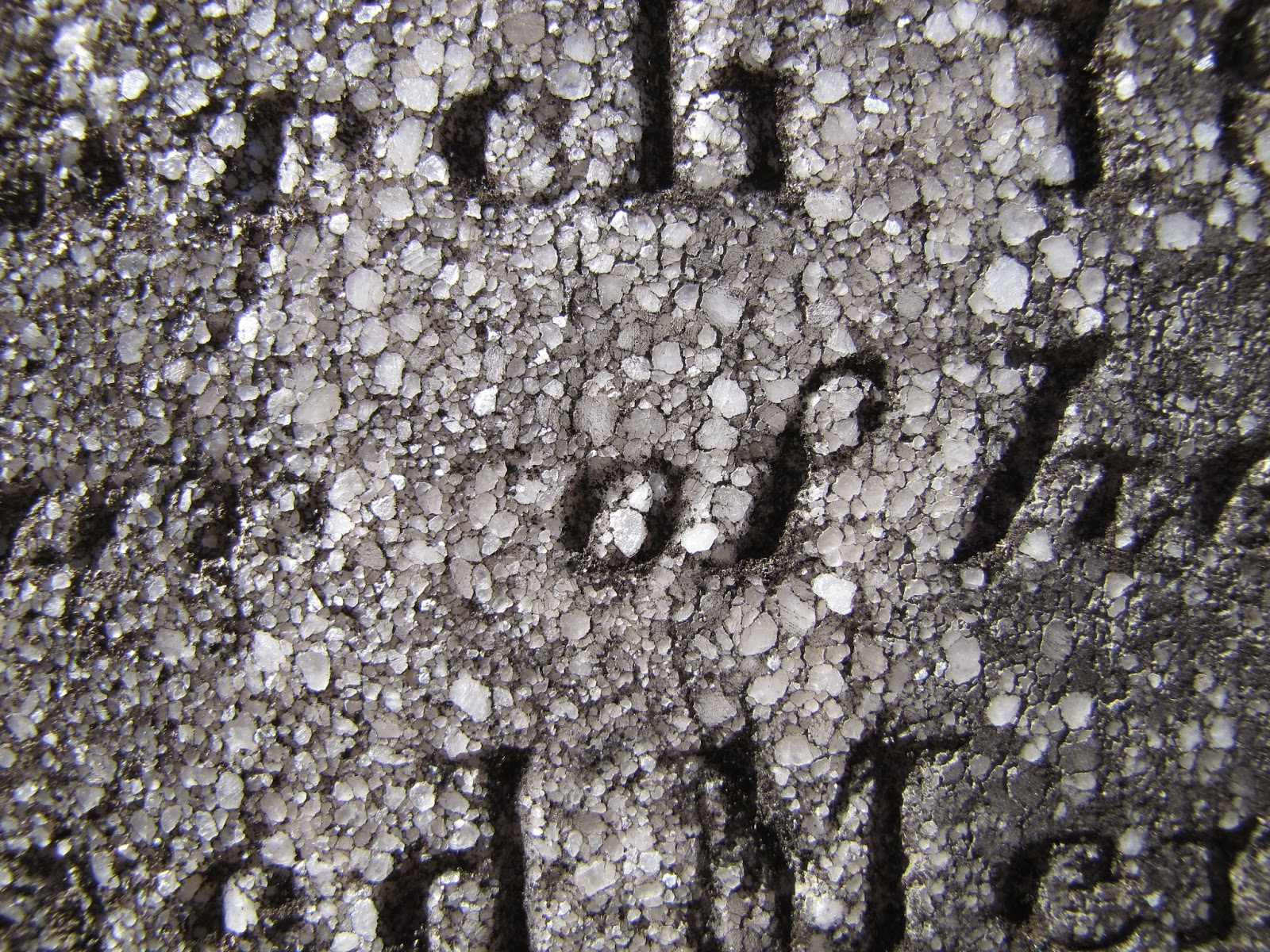 My travels include visits to cemeteries precisely because even stones do not last forever.  The base of this stone was piled with little bits of shiny stones sadly. 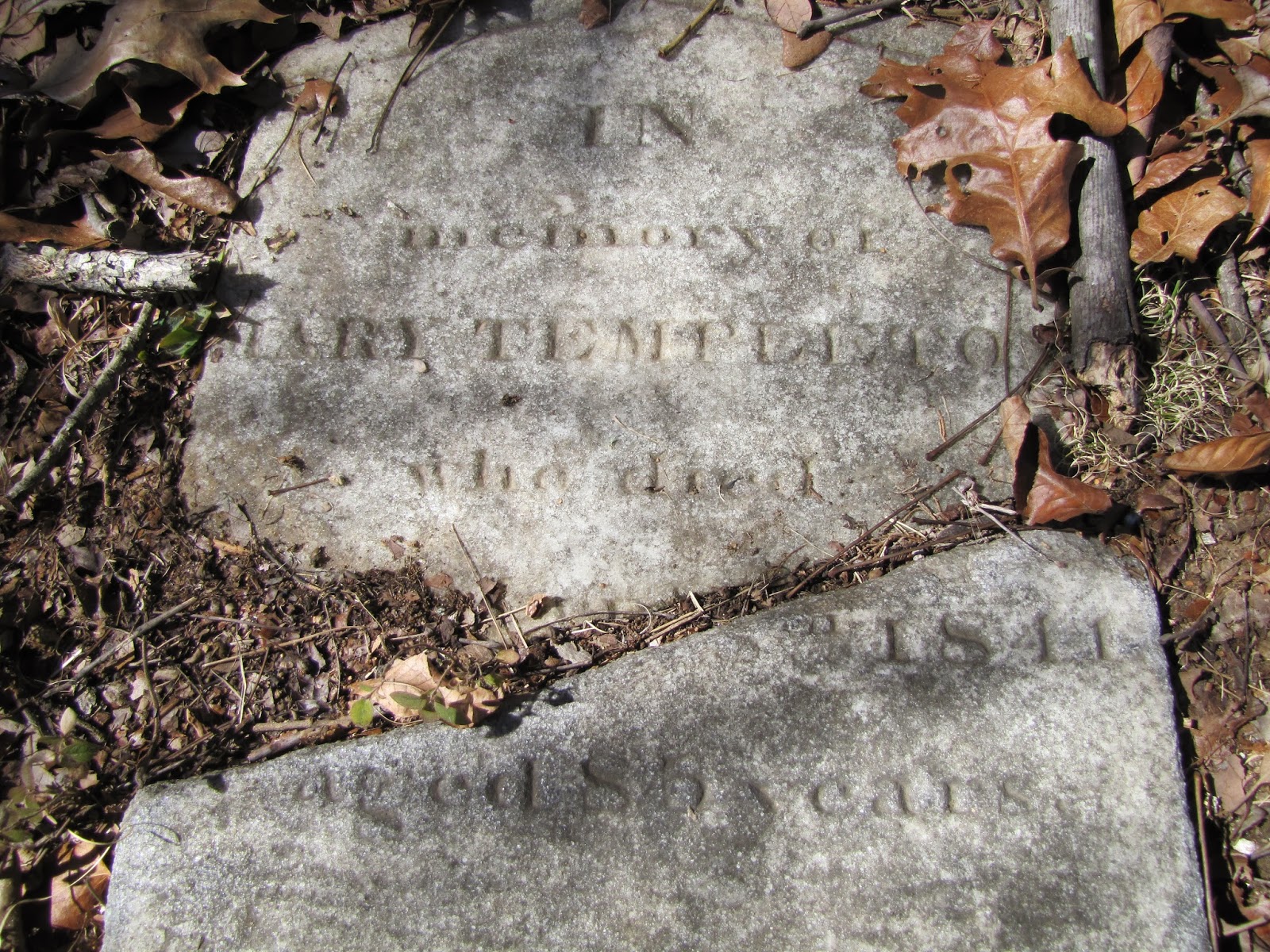 Nearby lays a catastrophe of markers.  They may be my ancestors or maybe yours. 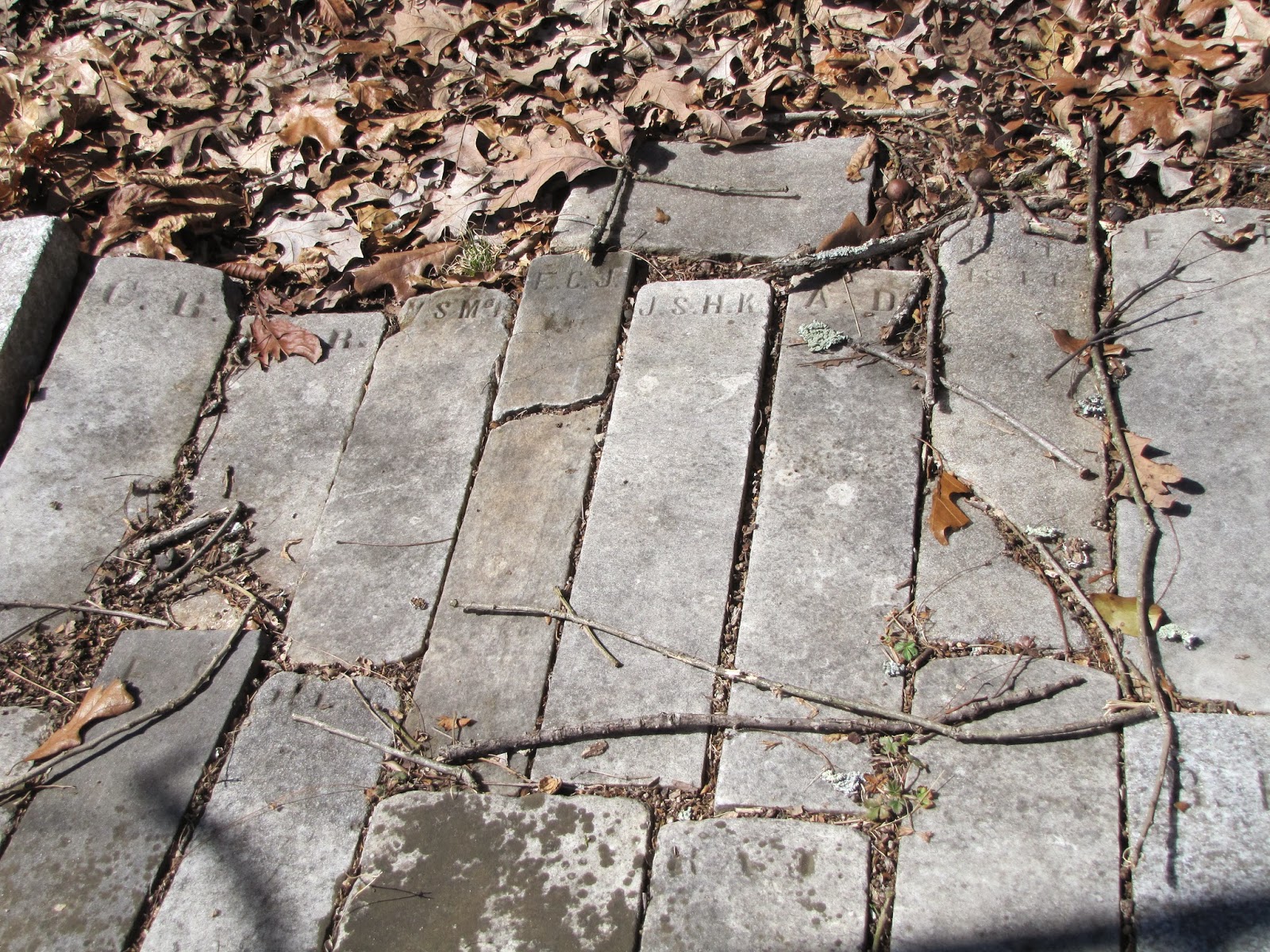 I came all of the way across the country to see for myself an image of my grandmother's gravestone.  I have been having many adventures along the way, but I hadn't lost sight of my quest.  Della Oliver.  Isn't that a lovely name?  Searching for her family led me to Plymouth Rock earlier in my travels.  Had I not been looking, I would not have had that side adventure.  Della was my grandfather's second wife.  She was known as the "Belle of the Town".  I'll soon travel to Charlotte, North Carolina, to see the only existing photo of her.  I have seen it once and am eager to see it again.  (Will she look like me?)  Della's past has been a mystery to me for many years.  I couldn't find the paper that gave the facts that I needed.  Finally, a copy of her death certificate gave me her mother's name and her father's name.

Della was not served well with extensive documentation of her existence.  Unfortunately her gravestone exhibits the same degree of erasure of her being. 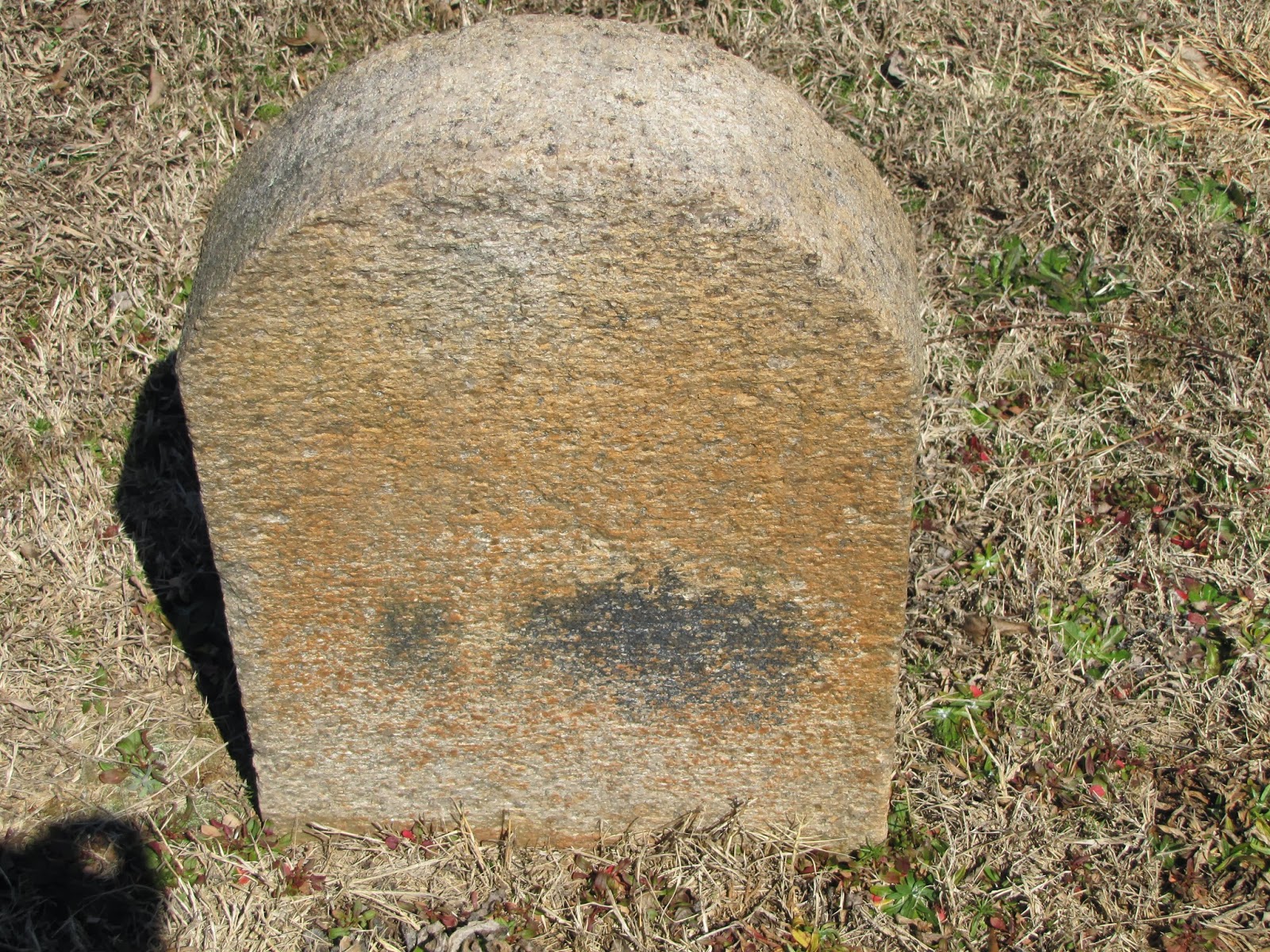 Both sides of this stone are devoid of writing.  The weather of ninety-eight years obliterated any trace of letters.  The plot surrounded by a low stone wall has three of these stones.  None have writing.  Any one of them could be Della's!  Iva knew the story of the stones.  I might not have guessed it.  When I was younger, I could have asked so many more questions.  Don't delay too long in asking the questions that one day you may have. 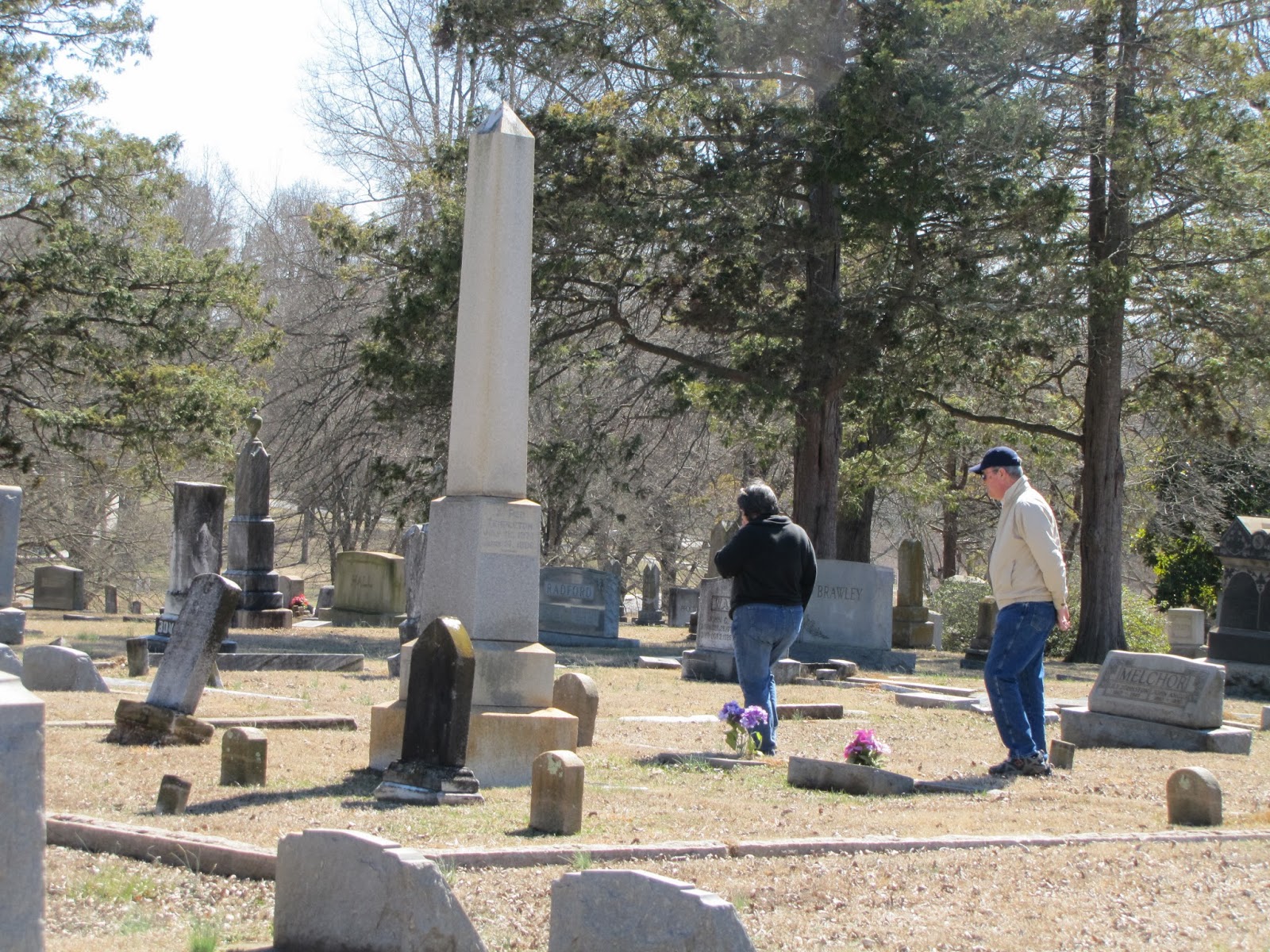 See that monument in the middle of this picture?  That is the memorial stone marking the location of Della's husband, Robert Sinclair Templeton (1845-1921).  Iva and Dan are helping me find Della.  She is one of the stones. The far right small one or one of the two just to the right of the tall marker.

Robert was fifty-two years old when he eloped to South Carolina with Della, a fourteen and a half year old.  A clipping from the Mooresville paper, the Landmark, stated, "R. S. Templeton, Esq., postmaster at Mooresville and a Miss Oliver of that town were married in South Carolina several days ago.  Mr. and Mrs. Templeton returned to Mooresville after their marriage, but is seems that for some reason the affair was kept secret.  Mr. Templeton was in town this week and told some of his friends here about it."  What!  The window into my past makes me feel like I am a peeping Tom! 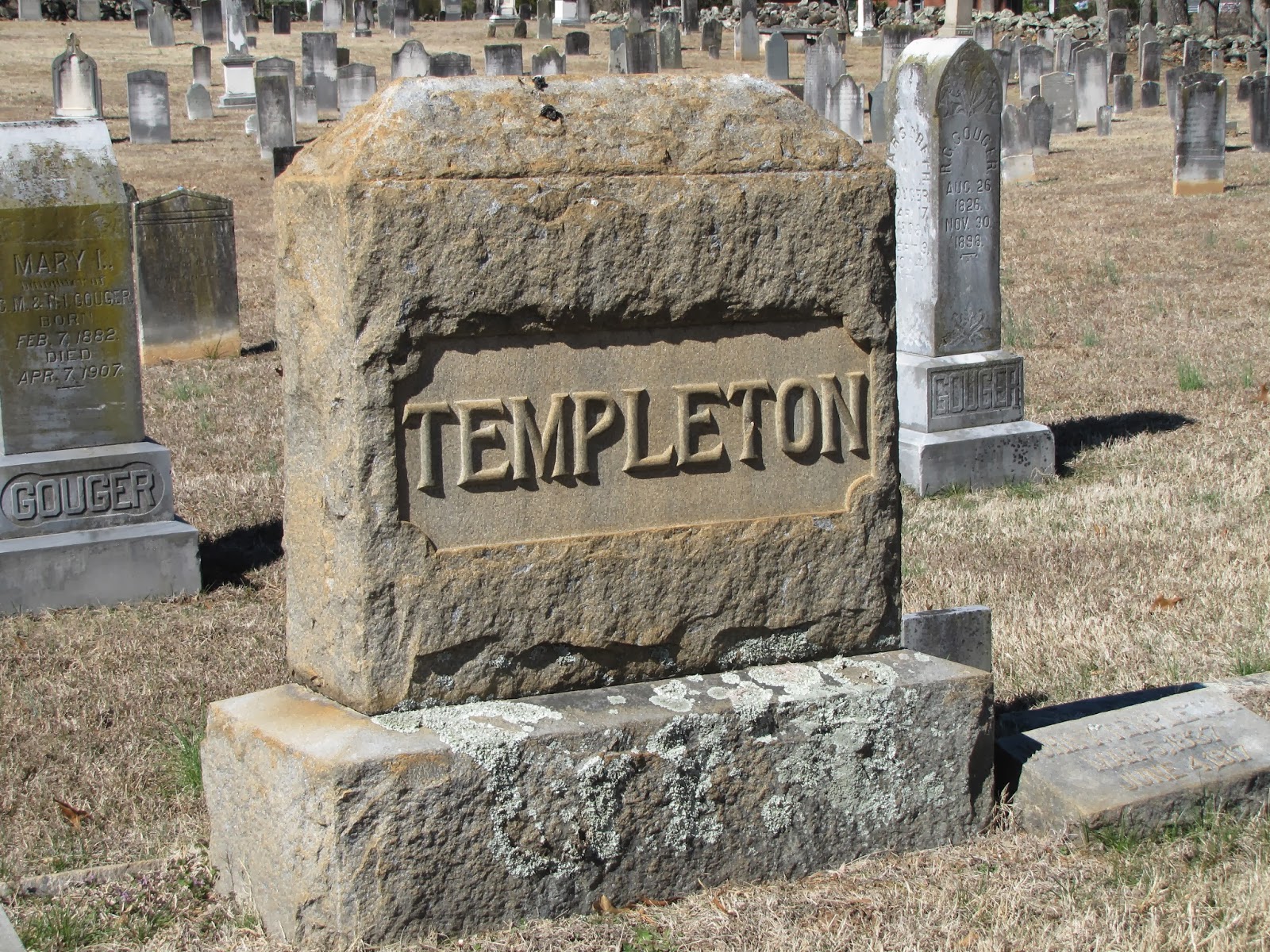 I don't do crossword puzzles, although they are supposed to keep the brain sharp.  I do genealogy instead.  I have many windows to explore.  I took photos of any Templeton stone that I happened to come across in three small cemeteries. 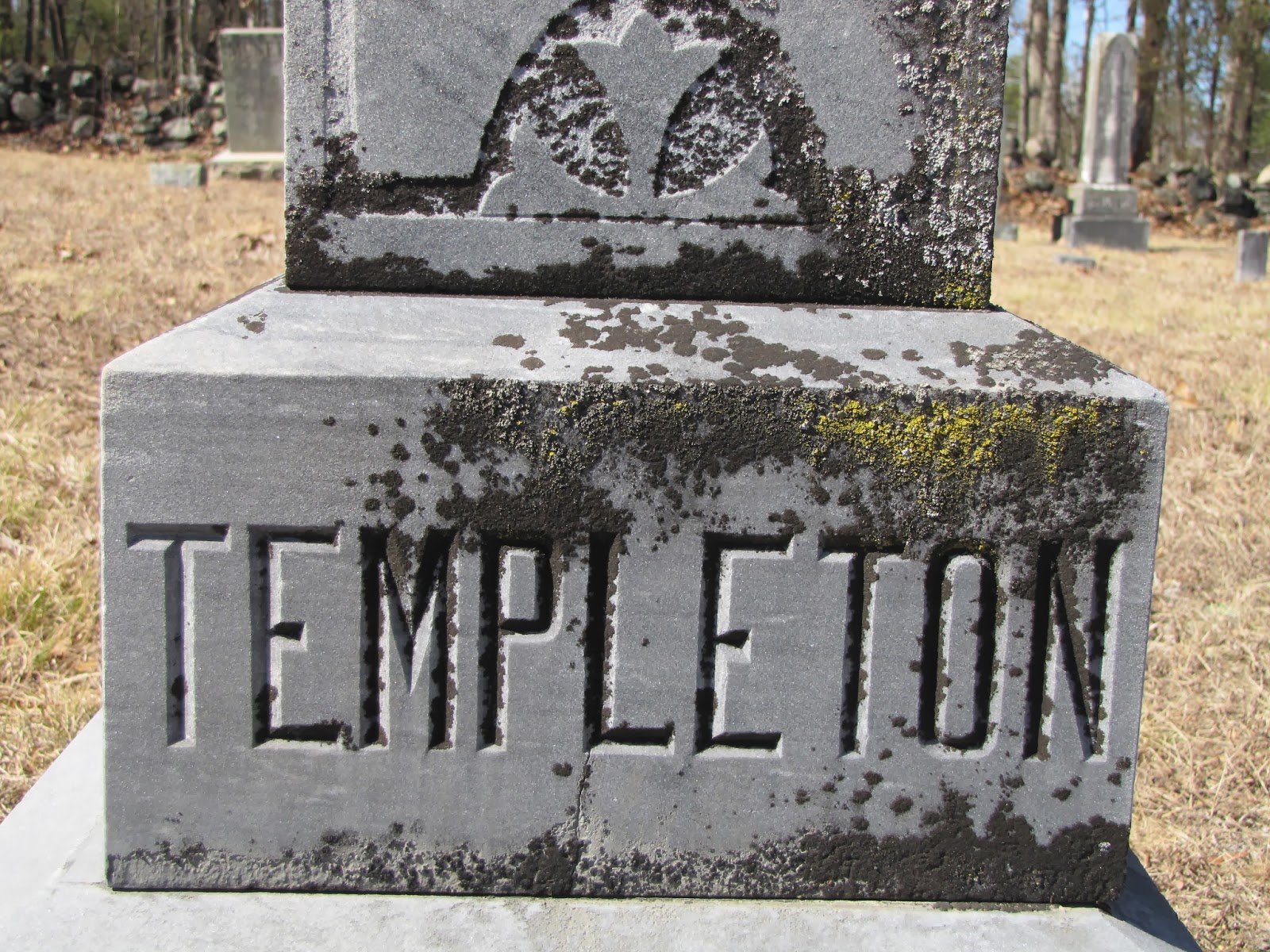 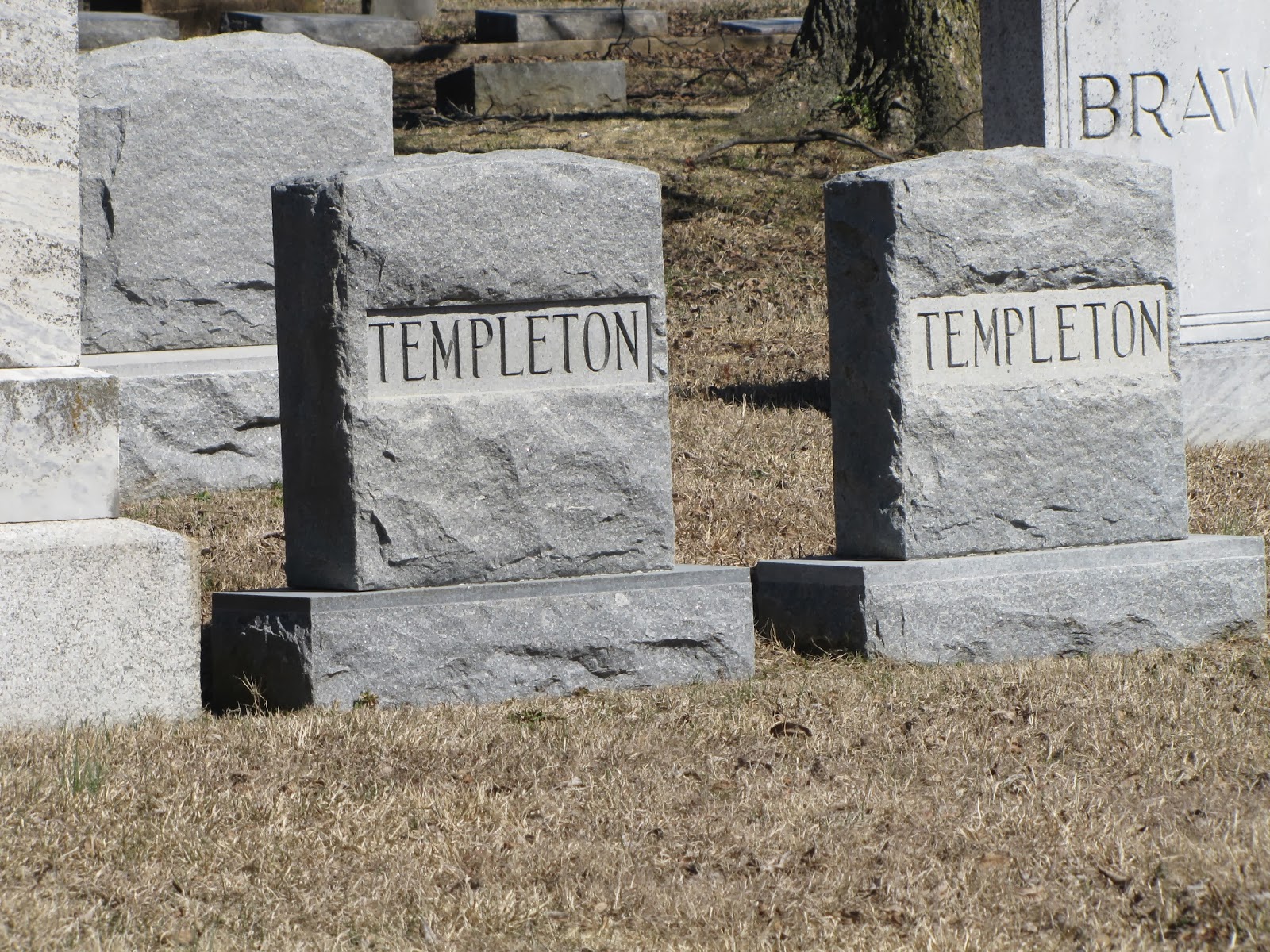 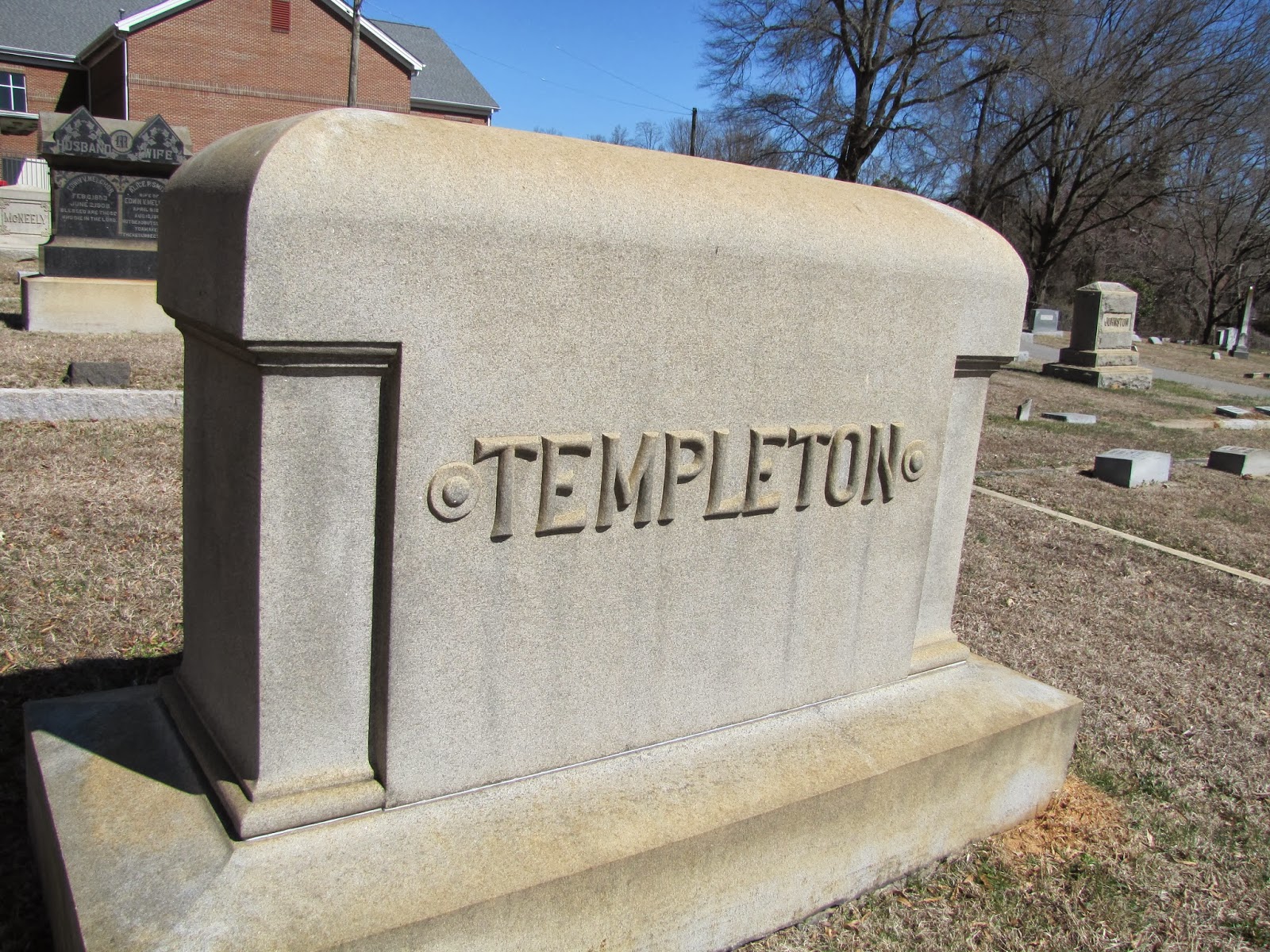 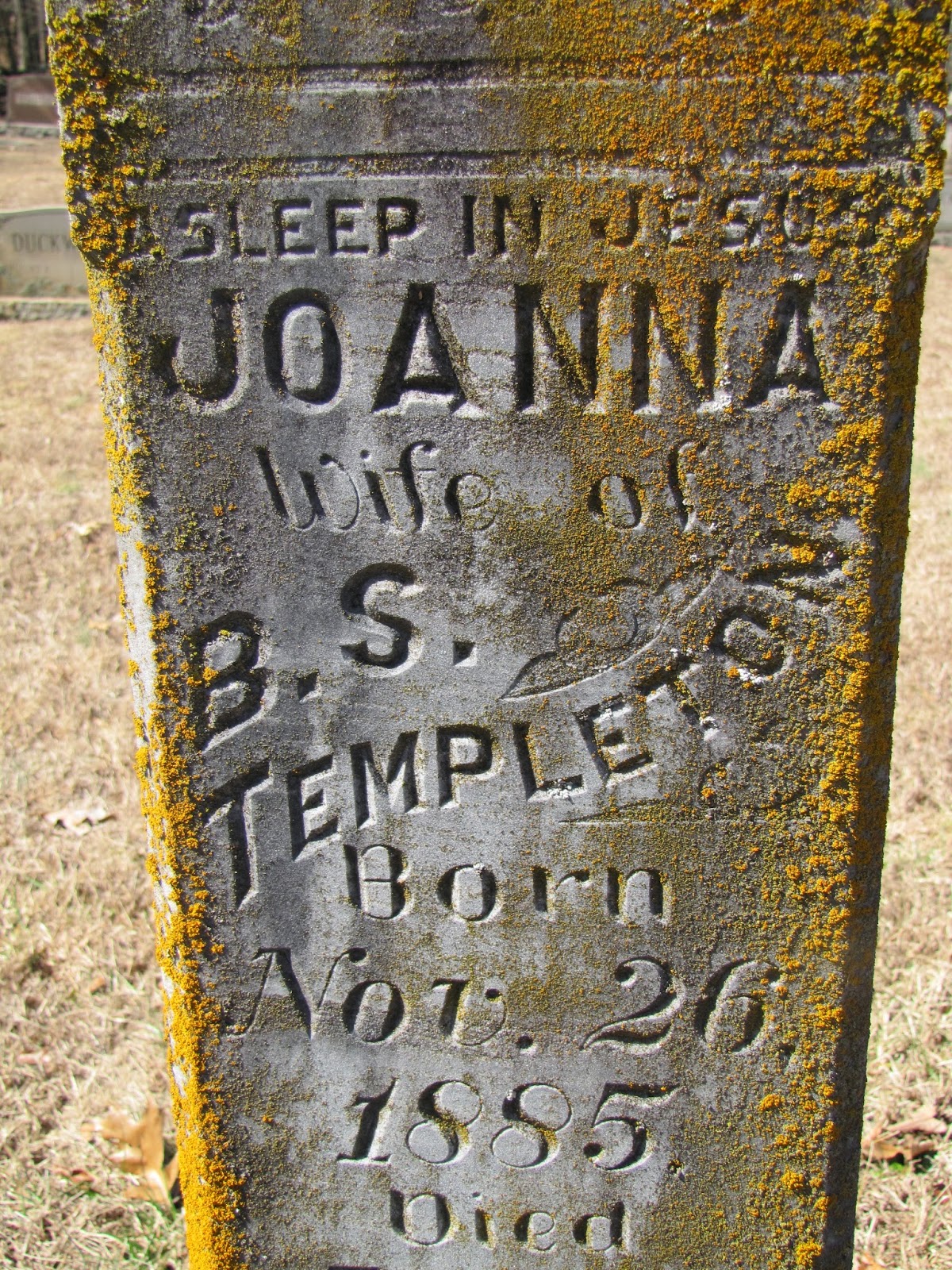 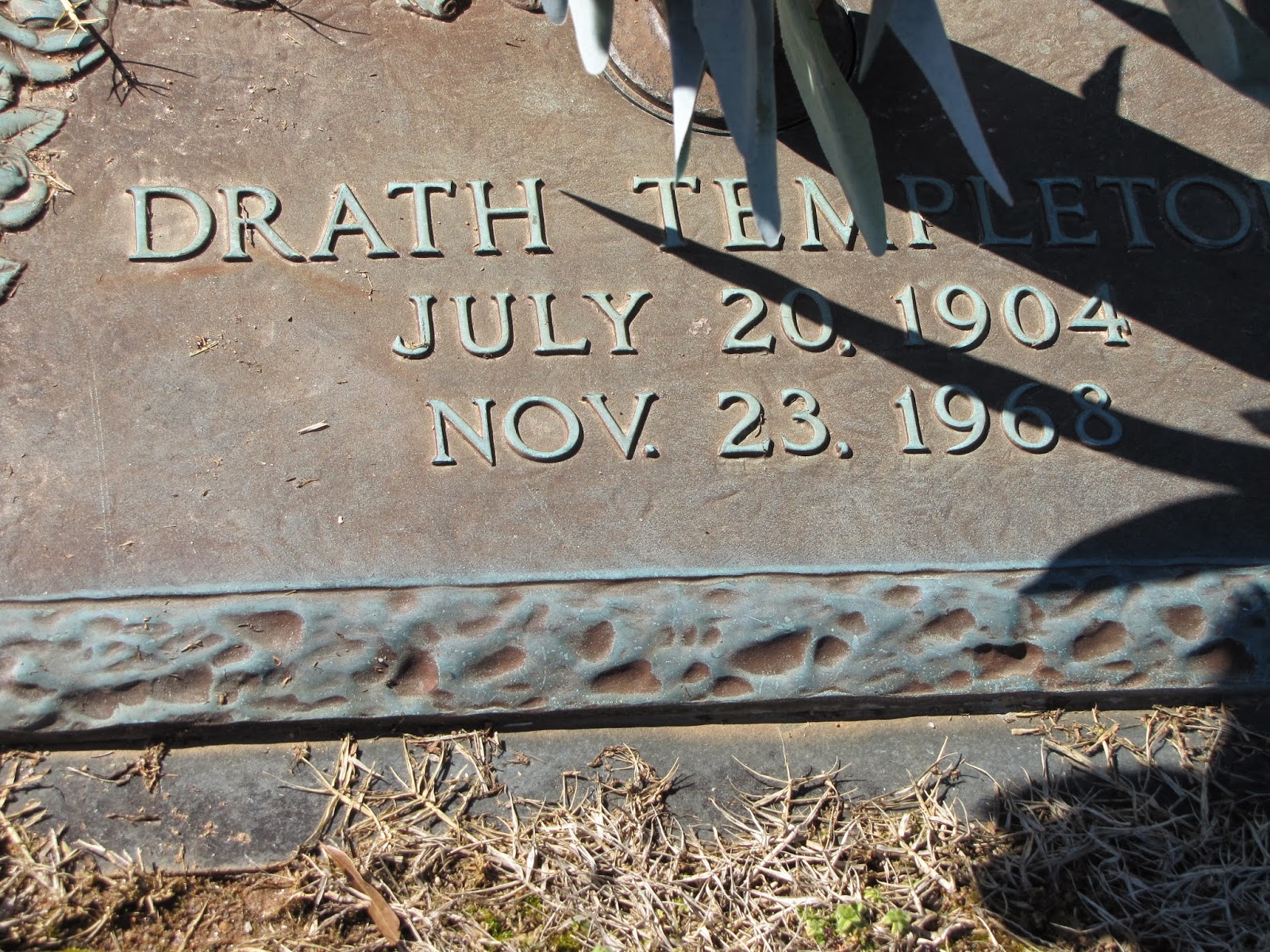 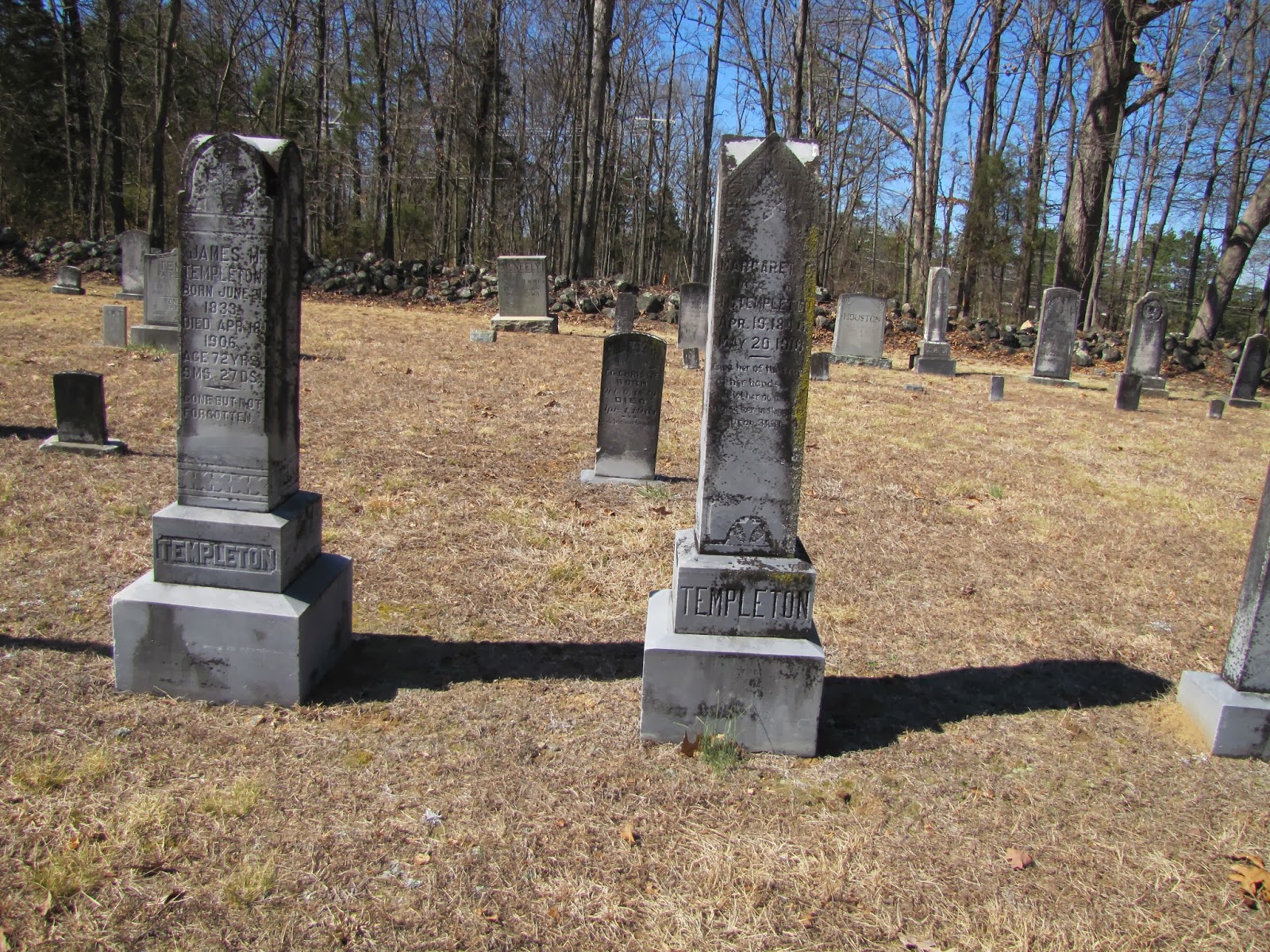 How many Templeton stones did I see?  NINETY stones in one day!  Searching for ancestors is not dull!

I got to walk in the sunshine, solve mysteries and laugh a little.  I like doing genealogy.  I don't think that I am related to these folks.  Are you? 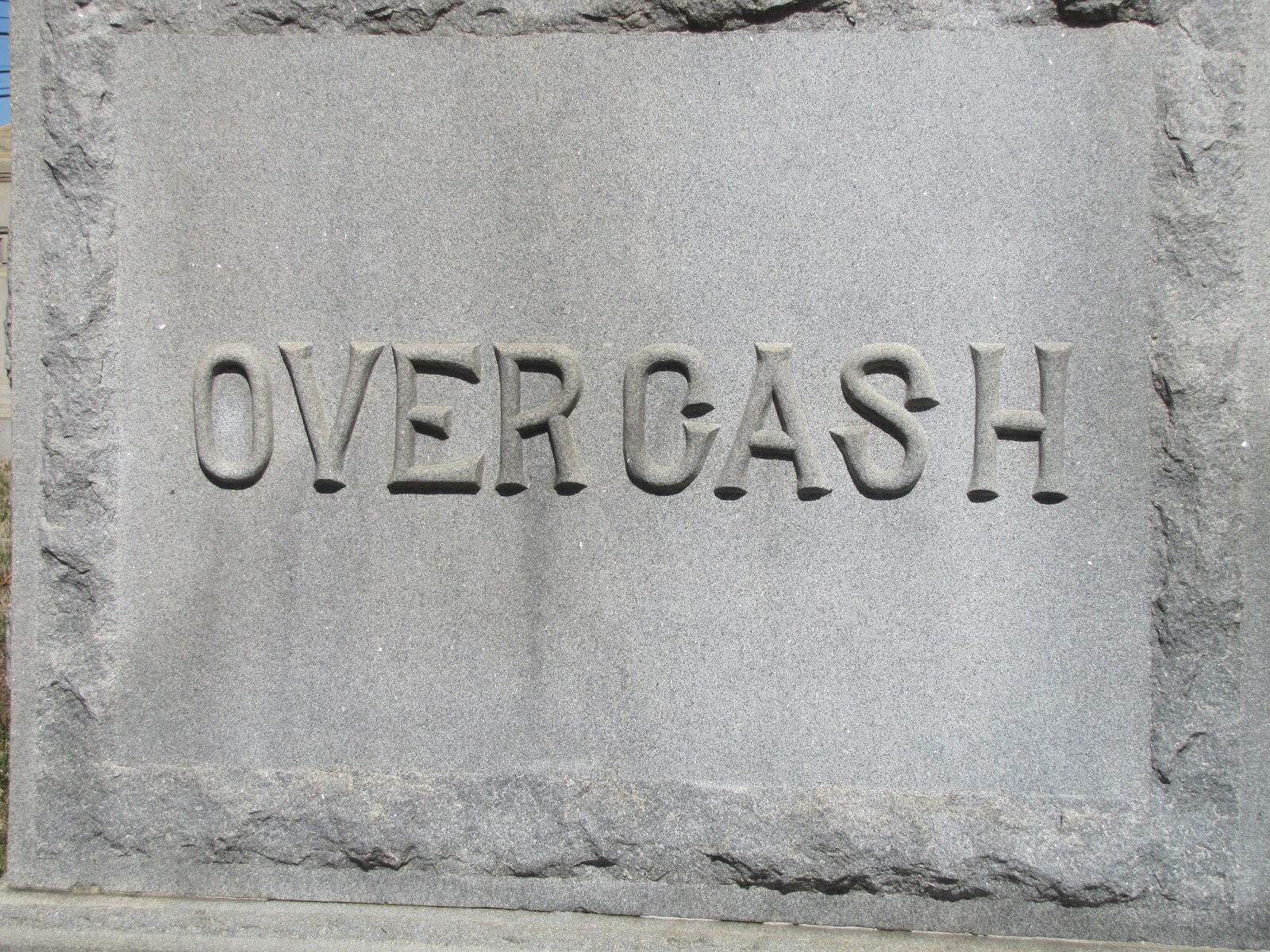 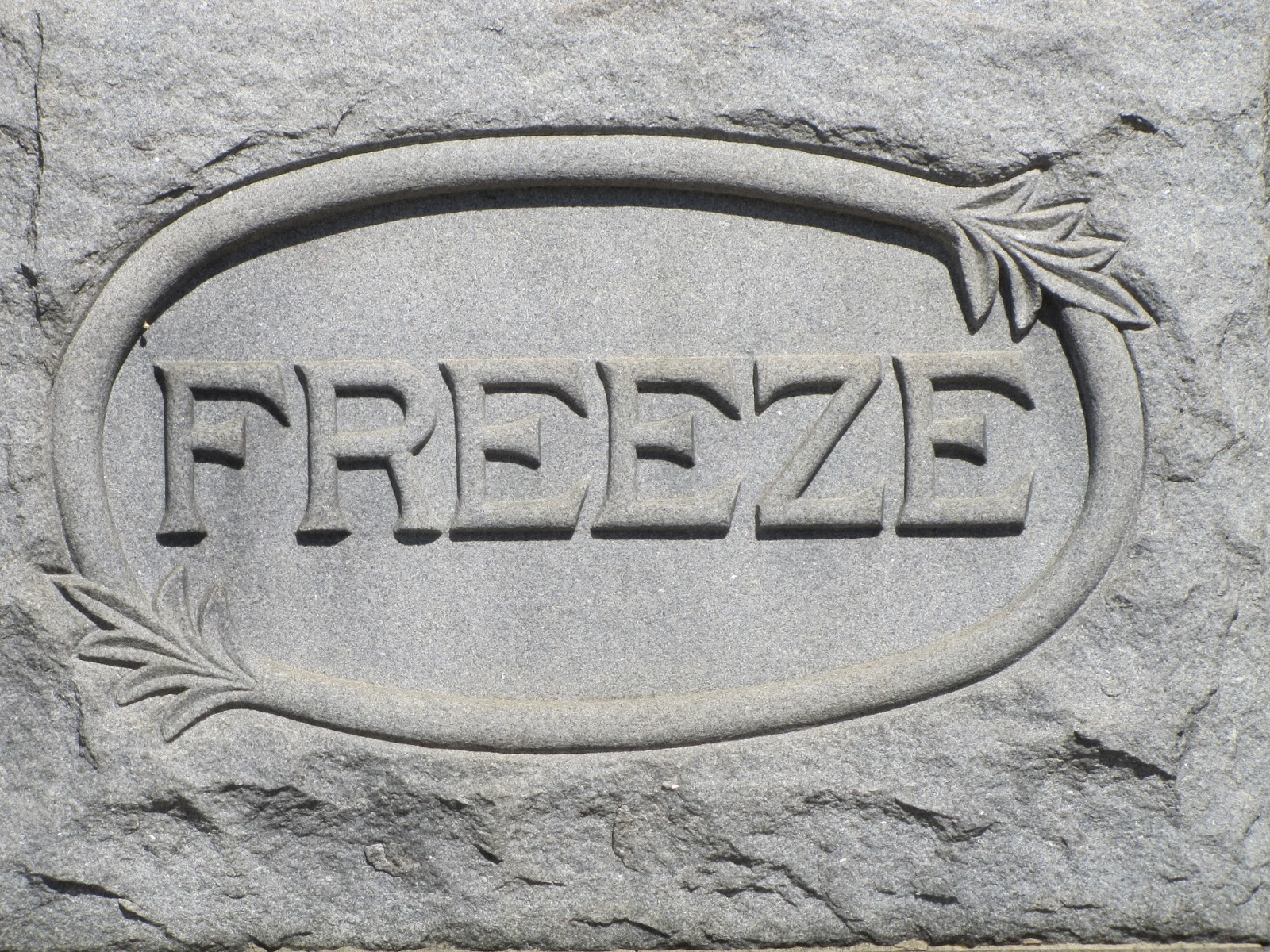