While Putting on Socks 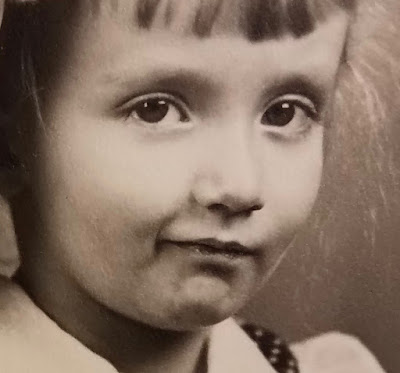 Something was familiar. I felt it around my eyes as if in some prior time, I had looked through these same eye sockets while also standing on one foot putting on a sock. The feeling evoked small bright anticipations and felt like the recovery of a stored memory from a long time ago. But when was it and where was I, and why was I having this reoccurring sensation a number of mornings in a row?

When I felt it again this morning – coinciding with an image of my childhood self in my childhood bedroom getting dressed – I had it.

This is how my days would start when I was a youngster. One might have thought that I was in quarantine by the ways I spent my days back then. Between meals, children were mostly left to their own devices. I had companions and we certainly whiled away many hours exploring the neighborhood, riding our bikes, or engaging in some game or another, but most hours were ours to spend alone – many in the house. Chores were simple and could be done by oneself. T.V. was never turned on at my house during the daytime or if the radio was broadcasting it was in the voice of a baseball announcer (background noise). Electronic devices were almost non-existent, unless you counted the rare walkie-talkies or the phone with its party lines.

In this era of Covid-19, the stay-at-home mandate doesn’t seem much different than my childhood routine. I am not scheduled to be anywhere, and every day offers the bounty of time alone. It’s the dressing that prompts the memory. It happens before the tinkering with the toaster and the filling of the kettle. I already have woken slowly and considered the day’s responsibilities, so it falls then to those in-between moments of mindless dressing to consider and relish the possibilities of delight the day will afford. I am rarely disappointed. It might be something so simple as the lovely stalks of tulips on the counter, noticed just before turning out the light for the night. 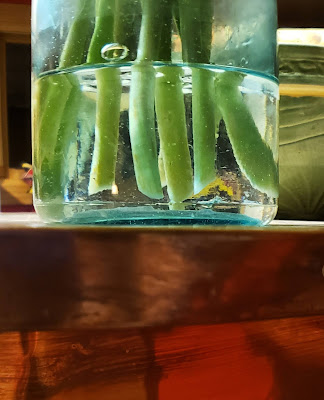 When I read the stories of the difficulty of families sheltering in, I imagine the chaos of kids in conflict, parents stressed out on yet another Zoom conference, or the immense sadness of having someone dear lost to the virus. This is not my story. Mine has a glimmer of being in love with a day’s possibilities, even in constrained circumstances.

My time is spent in simple ways, like those of my childhood. Take the sounds of that time of indulgence. Slap, muffle, catch. Slap, muffle, catch. I bounced my red rubber ball against the side of the garage and caught it on the rebound from the grass. Jacks made pleasant clinking noises on the cement floor of the same garage. Sometimes I lay on my belly in the hot sun on a towel in the backyard, comforted by the familiar noise of a neighbor mowing grass. I liked the sound of silence in my own bedroom. It was a plain room without many toys at all, but again the adventures of books sustained me many hours. 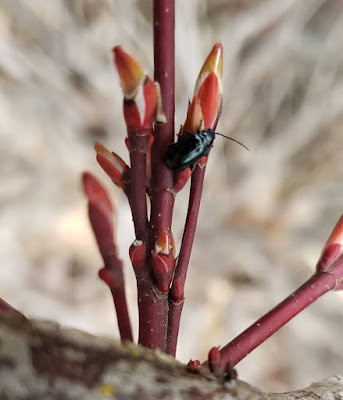 These days, some part of every day is spent outside. I watch for bugs and the budding of trees and bushes. And the noises in these days are as simple as hearing a frog in the little bog across the dirt road or the tiny screeches that mark the arrival of the violet green swallows that have returned from Mexico or Central American and somehow managed to again find the nesting hole in my guest cabin.

Inside, I skip from book to book depending on my mood. And if I need a greater field of exploration, I vicariously choose the book of thirty-three walks of London from a book I brought back from the same city in January.

These are all plain pleasures. Anticipated in the morning while the socks are coming on.
Posted by boxoftales at 6:11 PM