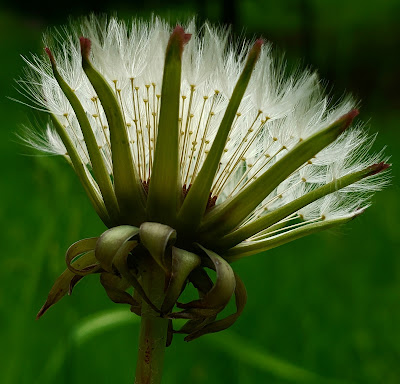 "Christopher throws dandelion head after dandelion head into his bag.  It's getting heavy now and his fingers are stained from the work but there are still so many left to kill.  His biggest mistake was giving them names."  Quote from Brian Martinez's novel Kissing You Is Like Trying to Punch a Ghost

I tossed my own share of dandelions into a bag this spring.  The usual crowd of common weeds reappeared on the slope leading up to where I garden in a couple of barrels that sit on the hillside in back of my cabin.  The soil on the rise is so hard and rocky that I never dig up all the dandelions' root systems.  Invigorated from their winter rest, the plants re-emerge from their old root stock, healthy and tall.

I don't name individual heads.  Or I haven't until now.

Lady Queen Ellie, pictured above, was down the road sunning in the late afternoon last week. Below the ruff at her neck, her body was cinched long and tight above the flounces of her leafy skirt.  She held her head as if careful of her coiffure, enjoying the interlude before her company arrived. The breeze coming through the pines was expected by nightfall.

I haven't much noticed individual dandelion heads.  As author Doug Larson so aptly puts it: "A weed is a plant that has mastered every survival skill except for learning how to grow in rows."  Dandelions arrive as a swath of yellow, a crowd heralding spring, bees, and weeding.

But this year after most of my weeding was done, I noticed something that I hadn't particularly seen before.  After a light rain, a few of the dandelion heads down the road were just opening their feathery flight mechanisms.  The thin white shapes and fans were dotted with tiny drops of rain.  At first I thought that the specimans were a rare form of dandelions with their narrow white segments, but now I know that I had caught them in their transition stage from a bunched white bouquet to a spray of airy fans.

This is Miss Lilly White.

And this is Captain Reginald Poof, floating in a puddle, beckoning a brown bug to come aboard.

I am worried about next year.  What if every dandelion I kill, I feel compelled to name? 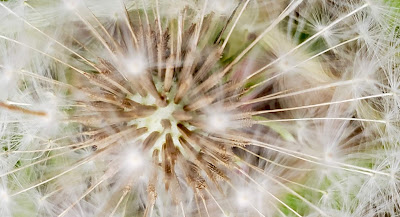 The Gang of Go Lightly

Or, worse yet, what if I must name every seed:  Lazy, Twinkle, Twinleys, Pop, and Helicopter.  I would then have to name the obsession.  How about dandeonomamania (mania for naming dandelions)?  Ono.  That's a nice name, isn't it?