As I reached to click off a lamp last night, I noticed tiny bubbles clinging to the stems of peonies displayed in an antique, embossed bottle.  A half-an-hour later, much past my usual bedtime, the light got switched off.  This is the series of photos that resulted during that space of time.  The post includes a little information on the history of the Big Chief soda bottle brand and of peonies. 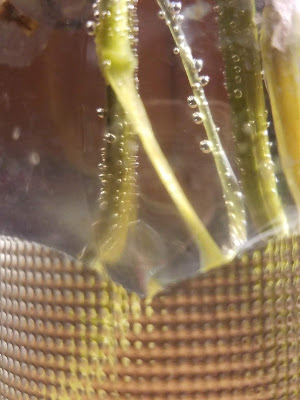 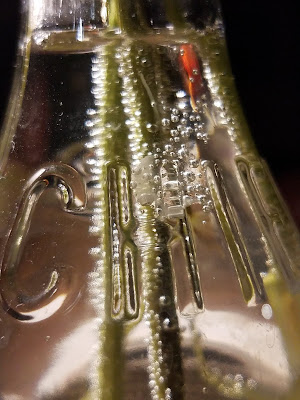 The bottle says BIG on one side and CHIEF on the other.

Old bottles, even mine with its thick and heavy bottom, have chips.  As I looked for information about these types of glass containers, I came across a conversation in which an older gentleman described where he looks for bottles. He said he searches along old roads in his locality, looking approximately a foot under the leaf mold around oak trees.  His theory was, much like what happens today, bottles were aimed at trees, tossed out as litter from passing cars.  My bottle has very thick glass, so it likely hit a rock instead of a tree to make a chip of this size: 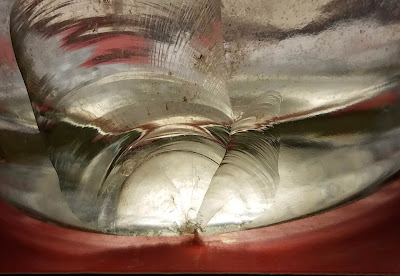 I put my bottle on a red coaster to highlight the swirls and to emphasize the thickness of the base, but here is another view of the same chip. 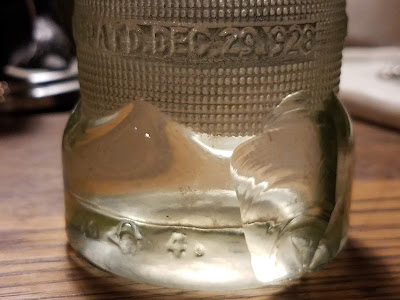 The patent date is Dec. 29, 1928.  The Big Chief emblem, a flavor branding, was purchased by soda companies.  They were then free to manufacture the bottles in various sites around the United States.  Some bottles have the place of manufacture embossed on the base or lip.  Mine has none.  Some of the bottles have paper labels and are not embossed.

On my bottle, this portrait is displayed on both sides.  There were a number of variations of this face and headdress made.

The patent date does not indicate the precise date the bottle was made.  A company buying the branding would make its own version to fit what they produced.  The variety of embossed designs was possible only when bottle-making machines became more automated and required less-skilled labor.  Cherry, strawberry, lemon, lime and orange flavors were a few of the types of sodas bottled under the Big Chief name.  The brand was available from the 1920s through the 1950s.  These bottles are now considered to be "common" among bottle collectors.  The attractive design and Native motif made them popular items for people to keep as treasures.

On June 2, 1924, five years before this patent was awarded, Native Americans were finally granted full citizenship (although it would be many years before every state made the right to vote a reality for Native Americans).  It seems so strange that a fascination with the Native culture by European transplants took so long to translate into full rights and benefits under the Constitution for the original inhabitants. 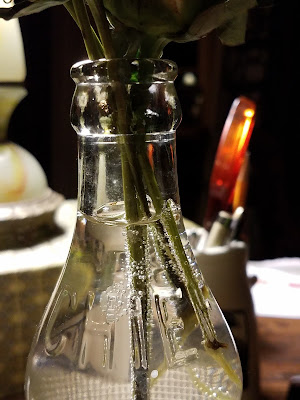 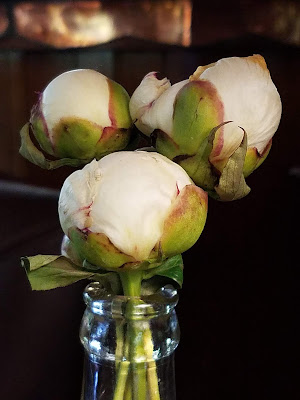 Peonies are also native to the Americas, found in the Pacific Northwest.  I always associated them with China and Japan, so I was surprised to find that, like the Native Americans, they too were here before the European explorers and settlers.

And the water, and the air and the bubbles... likely native also! 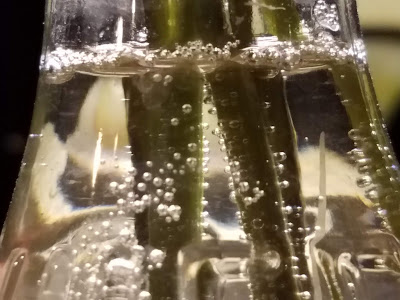 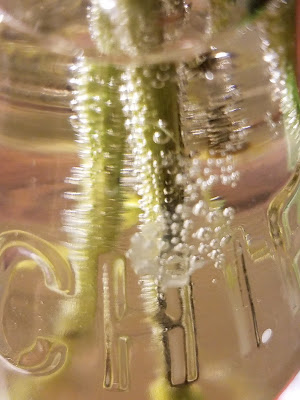 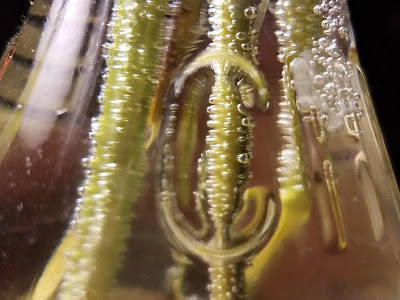 And this is the last photo before the light went off. 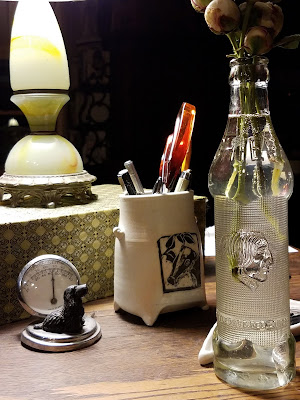 A credit for the gift of peonies goes to the Lapp-Floyd family.