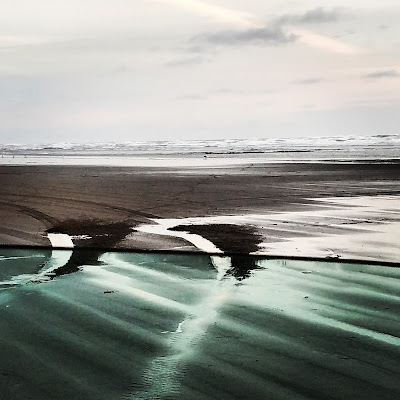 In this chaotic political season, alternative viewpoints abound.  Just as with taking an extraordinary photograph, parsing out worthy perspectives begins with a willingness to be flexible and to examine the essence of the ordinary.  A holiday on the beach provided opportunities for both.

When I snapped the above photo, the sky was a light and bland gray.  The pending sunset wasn't going to be spectacular.  Only when the driver got out of the car, leaving me an unobstructed view, did I notice the curving banks of sand bisected by his tinted window.  The unremarkable evening and a most ordinary moment produced an amazing picture.

The same had happened the day before.  I took a photo from my dog’s viewpoint.  I don't ordinarily consult her about photography, but when I bent to untangle her leash from her leg, I saw what she could see.  Even acting as an oblivious resource, my dog was able to help me spot something of value. 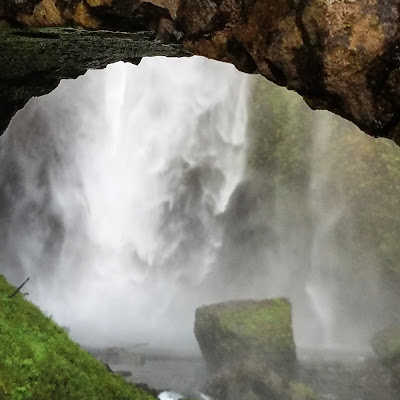 A local loyalty parade gave me a chance to examine a puzzling political phenomena. The parade was gloriously patriotic, stirring and fun.  My friend and I had a view from where we sat high atop concrete flowerbeds.  From the moment we settled, I noticed a politically-inclined family directly across the street from us.  The father glad handed the Republican mayor as he passed leading the parade.  The grandmother wore a Trump t-shirt. There is a hazard in wearing political paraphernalia.  It may be offensive to someone who will never take the opportunity to see you from an alternative perspective or not be willing to notice your best qualities or ask for your wisdom.  Knowing this, I reminded myself to be flexible while I watched the little family enjoy the day.

What I saw was compelling on numerous levels.  I liked the way the grandmother hugged the littlest child and tried to engage her in the music by pumping her arm to the beat of the passing drums. The grandmother looked a little like me with her long grey hair.  By not dyeing our hair, we likely agree to set aside any pretense about our aging.  I liked the way the grandmother tossed her head back and laughed in conversation with her daughter or daughter-in-law.  I liked the solid look of the dad.  He was dressed in his clean weekend jeans and a nice t-shirt and baseball cap.  He looked responsible and hardworking.  He looked like the guy you would call in an emergency.  His wife had beautiful black hair and a lovely smile.

I did not take a photo of them.  They appeared to be an ordinary small town family comfortable in their setting, their social community and their circumstances.  By being flexible, I could appreciate their intentions, regardless of their political bent.  But as I watched them, I was able to find a viewpoint that sharpened my understanding of their predicament.  I relied upon an analogy depicted in a few of my photos.

The previous week, I took a photo in eastern Washington.  Its success relied entirely on the reflection in the water. 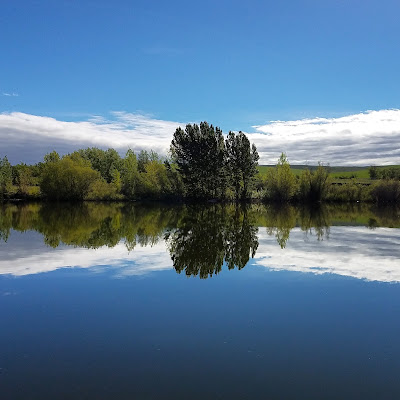 Watching the family enjoy the parade, I considered what I know about the Trump administration’s decisions and tried to match the reality of this family’s circumstances with a mirror image of Trump's policies.  It would make sense that one would mirror the other.  But like this next photo, there was a disconnect. 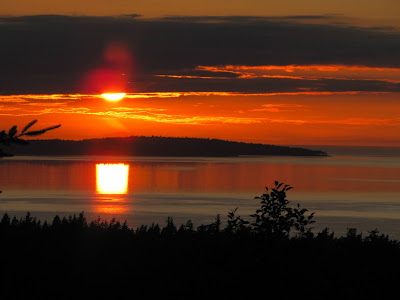 The little girl’s blank face, her lack of foot tapping or arm waving was odd for a toddler.  Ten or so marching bands passed her with no indication she was aware of them.  Her eyes did not track one clown, motorcycle or animal during an hour and a half period. She ran and grabbed one sucker from the road and put it in her mouth without taking the wrapper off.  Her only enthusiasm was for eating candy and the roll of pastry which her mother handed her.  Neither parents took any opportunity to engage their two girls in vocabulary-building conversation.  The mother was a hundred or so pounds overweight.

Round circle, square reflection.  Boxed in by policies proposed to cut special education for children with delays, cut funding to libraries, reduce requirements for healthy school lunches and hike insurance rates for seniors and those with a condition of diabetes, this family's sunny facade squares with impending disasters.

I would like to believe that the dad could save them.  He appeared to be a good man.  But will he be flexible enough to risk that next year the mayor might not confirm his standing in the community with a handshake?  Will he be strong enough to take a few alternative viewpoints to protect his family?  Will his mother or mother-in-law find herself an alternative identity wearing an ordinary t-shirt to next year's parade?  Will this family, like so many others in ordinary circumstances, find the extraordinary courage to be flexible and seek alternative viewpoints?