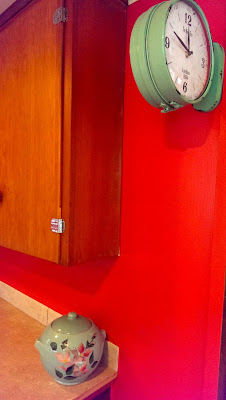 As a child, my mother’s cookie jar sat on the kitchen counter in our cement-block house in Reno, Nevada.  The jar wasn’t often full, but frequently enough for me to associate its curvaceous green shape and hand-painted flowers with chocolate chip cookies.  After my mom and dad passed away, the cookie jar came into my possession.  By then, the jar’s original lid had been broken and replaced with a dark and ugly wooden one. The replacement top gave the cookie jar a depressed appearance as if it was an old man who had found an ill-fitting hat on the street and wore it because it was all he had. I put the jar away.  Eventually, I located a matching lid, but by then our kitchen had been painted in hemlock green and the color clashed with the cookie jar.  I returned it to its cupboard.

Last week as I stored an infrequently used coffee maker up in a high cabinet, the cookie jar caught my attention.  I realized that its color would match the clock in my other kitchen.  Within a couple of hours, the jar had been moved to my cabin.  With the clock above it seeming to say time for cookies, the jar, looking as if it had changed into a Hawaiian shirt, appeared cheeky against the red wall.

I’ve been thinking about those things (like cookie jars) and those people in my life that I have loved.  A good part of my years I ricocheted back and forth across the country.  I’d make friends and family ties, or acquire treasures.  And then, circumstances or chaos (often of my own making) would require another move or house or job and once again friends or family would become intermittent connections in the form of letters, rare phone calls or even rarer visits.  Possessions would be boxed, displayed and re-boxed.

On occasion, I will use painting as a way to think about what I want to say in my writing.  I just finished painting the one above representing a timeline of my life and the friends and family I have known. 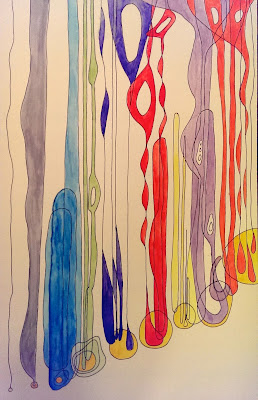 When I traveled for seven months I visited people from every time period of my life.  For example, my high school friend Bob (actually we were also in kindergarten together) is one of those people who came back into my life.  He and his lovely wife, Kristin, visited last summer and gave me that green round clock that now calls out the hour of cookies.  In the painting above, Bob is represented as a friend from my Reno High School days (school colors: blue and gold).  The purple blue shape fans out at the top, representing the wide relationship that has occurred in the last couple of years.  Kristin is the white circle in the middle of his shape.

I appreciate that cookie jars and humans have the capacity to sustain connections across time.  Sometimes their communication becoming a thin line of simply knowing that they exist and at other times being expressed in long holiday letters or cross-country visits. 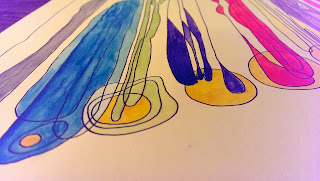 (Each yellow circle in my painting represents myself, as I grew bigger and older and, at times, wiser.) 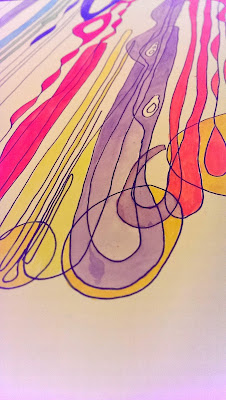 Some lives have ended, like Gary’s (purple for his high school color and for pancreatic cancer).

As I move to the little cabin, I will leave some possessions behind, but the ones that I keep, like the cookie jar, will keep reminding me of where I came from and who was in my life at the time.

For now, my clock is saying time for cookies.  I think that the first batch should be chocolate chip in remembrance of my mom.
Posted by boxoftales at 12:12 PM